If you’re planning on leasing or buying a new van in 2030 and beyond, under current government plans it won’t be diesel powered. But is pure electric the only option for a zero emission vehicle? What about hydrogen (or ‘FCEV’ - Fuel Cell Electric Vehicle) vans, and what are the practicalities and costs compared to electric? Vanarama Van Expert Tom Roberts puts the two emerging technologies head to head.

Electric vans are being launched across the sector by multiple manufacturers, and at times it can feel that electric power is the only option available to van drivers. But it’s not, hydrogen power is also a key player crying out for your attention. That’s why in this article, we’re putting electric and hydrogen head to head in an alternative fuel royal rumble. Let’s get started.

What Is Hydrogen Fuel & How Will It Work In A Van?

The first thing to get clear is that a hydrogen van is actually propelled by electricity. Electric motors turn the wheels in just the same way as in a battery-powered electric van. The big difference is in how this energy is provided. In an electric van the batteries are charged when the vehicle is plugged into a charge point. Alternatively, in a ‘range-extending’ vehicle, a conventional engine is used as a generator to recharge the battery pack on the go or to provide enough electrical power to drive the van should the battery be discharged or need some help.

With a hydrogen van, the vehicle is filled in a similar way to a diesel van at a fuel station. Initially in liquid form, the hydrogen is fed into a fuel cell where all the interesting stuff happens. Put very simply, the hydrogen (now a gas) is mixed with oxygen and the reaction between the two elements creates two things - electricity and water. The electricity powers the vehicle and the clean, harmless water is ejected through an exhaust pipe as vapour or steam.

Yes, tailpipe emissions are zero. There’s also the possibility in the future of wider availability of ‘green’ hydrogen. This is generated from renewable energy provided by wind, solar or from low-carbon sources. The electricity that is added to your battery-powered van when being charged is generated from a variety of sources at any one time. And although wind and solar power are forming an increasing proportion of the UK’s energy supply, much is still generated from non-renewable sources, such as coal.

Is There An Advantage To Driving A Hydrogen-Powered Van?

The main plus point is that it takes about as long to refill a hydrogen tank as it does to top up your old diesel van, whereas you’re looking at a minimum 30 minutes at a public rapid charge point to get your battery-electric van up to just 80% of battery capacity. There’s no need for overnight charging either, so you won’t need to install a home wallbox.

Is It Cheaper To Drive A Hydrogen Fuel Or Electric Powered Van?

At present, hydrogen fuel is sold in kilograms, not litres, and prices range from between £10 and £15 per kg. Although no comparisons have yet been made with vans, a study comparing a fully-electric Hyundai car with its hydrogen-powered equivalent concluded that, to cover 100 kilometres, the hydrogen car would use around £11.40 worth of fuel, whereas with the battery version would only cost around £2.79 to replace the charge used.

We’re guessing that, if demand takes off and more hydrogen is needed to satisfy demand, these costs will come down. There’s also the strong possibility that, given the current energy crisis, the gap could be narrowed from the other direction with charging costs increasing for electric vehicles.

Here’s the big catch for anyone who wants to be an early adopter and go for a hydrogen van. While we’re becoming used to seeing public EV charging stations almost everywhere we go in our towns and cities, you’ll be extremely lucky to spot a hydrogen facility. At the last count, there were just 14 stations in the UK offering hydrogen, and almost all these were in London and the South East. This falls well short of the Government’s original forecast of 65 outlets by 2020.

The rapid growth in electric charging points has been driven by demand. By 2030 all new vans and cars will need to be zero emission, and so manufacturers have been offering more and more electric vehicles and fewer powered by petrol or diesel. No one is forcing drivers to go down the hydrogen route, so fuel suppliers are understandably a bit reluctant to invest in a very expensive hydrogen infrastructure for a fuel that may not even catch on.

Is A Hydrogen Van Or Electric Van Safer To Drive?

Although the fuel is highly flammable, hydrogen is considered safer than petrol or diesel, particularly in an accident. If the tank is punctured, the liquid will immediately turn to gas and disperse, unlike petrol which will leak with the potential to catch fire.

In an electric van, there are some very high voltages lurking around the lithium battery cells. If there’s an accident and a cell gets damaged and short circuits, the electrolyte inside could combust, burning at temperatures of up to 1000 centigrade. This can start a chain reaction whereby most or even all the cells ignite in a blaze which is more or less impossible to extinguish, the only option being to allow it to burn itself out. Fortunately, these battery packs are extremely well protected from accidental damage and, despite a few high-profile incidents making the news pages, it’s very rare for an electric car or van to catch fire.

Which Type Of Van Will Be Heavier And Offer Lower Payloads?

Although a 100% hydrogen-powered van has a fuel tank (containing hydrogen) and a fuel cell (the bit where the gas is turned into electricity) it won’t have the considerable weight of a battery pack and will therefore be able offer higher payloads (depending on the strength and weight of the underpinnings).

Some hydrogen vehicles being developed and launched are hybrid vehicles, also carrying a battery which is charged on the go. These hybrids work on the same principle as range-extending hybrid electric vans and cars, and won’t have the payload that a purely hydrogen van would offer.

Fully-electric vans are already well-known for offering slightly lower payloads than their petrol or diesel equivalents, thanks to the higher weight of the battery packs.

Are Hydrogen Vans Available To Lease Or Buy?

No, although they are coming. The Stellantis group has announced production versions of their medium vans - Peugeot Expert, Citroen Despatch and Vauxhall Vivaro- in hydrogen form. Although initially just for the French and German markets and in left-hand drive. Vauxhall has announced that right-hand-drive versions for the UK will be available to order in 2023. 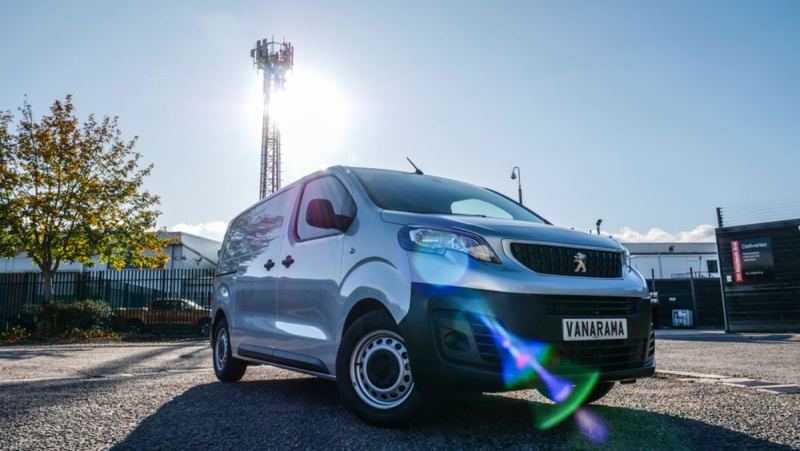 These vans will be hybrids, allowing a good balance between performance and range. Stellantis claims a total range of 248 miles, including 31 miles of pure electric capability - a useful reserve if you find you’re running low on hydrogen. Payloads remain over 1000kgs, and the van will be capable of towing a 1000kg trailer – not a lot, but as many electric vans are not designed to tow at all it’s a clear tick in their column.

Other manufacturers are at varying stages of developing hydrogen vans, notably Renault who are rumoured to be launching the hybrid Master H2-Tech van sometime in 2022.

Will Hydrogen Vans Be Cheaper To Lease The Electric Vans?

Although prices have yet to be announced for the hydrogen Vauxhall Vivaro, the figure of £60,000 has been rumoured. Compare this to the all-electric Vivaro-e, which starts at less than half that amount, and it’s clear that early adopters of hydrogen fuel vans will likely be paying far more than electric van drivers.

So, Are Electric Vans The Way Forward For Now?

Electric vans do look to be the best choice right now. If hydrogen takes off, the price of vehicles and fuel may well fall, making leasing and running a van a much more viable proposition.

The main problem is that until the refuelling infrastructure improves massively, few will consider hydrogen. But, if there are only a few vans or cars on the road needing the gas, where is the incentive for fuel suppliers to invest? It’s a conundrum, that’s for sure.

In the end, we recommend you look at the vehicle and what it can offer you, your business and your wallet. And remember, we’re always here to answer your questions, so don’t hesitate to call us if you have any.

To find out more on everything commercial EV, take a look at electric vans explained. Or check out our latest electric van lease offers.