Toyota has announced EV versions of its Proace & Proace City vans will launch over the next 2 years alongside a new "Professional" brand for its LCV proposition, a customised Proace Black Edition van & a set-in-stone sales target for Proace City compact vans of 35,000 per year! Vanarama's Tom Roberts was in Rome for the announcements, here's what he found out.

Rome is a city steeped in history, no stranger to earth-shifting announcements… okay, I'm slightly over-egging it here, BUT Toyota did have some huge reveals in store for the 90 European media reps at its Italian HQ on Friday 5th July.

Chief among those reveals… Toyota confirmed it will add battery electric versions of the established Proace medium van & new Proace City compact van to its light commercial vehicle (LCV) lineup over the next 2 years under the name "Proace Electric"! 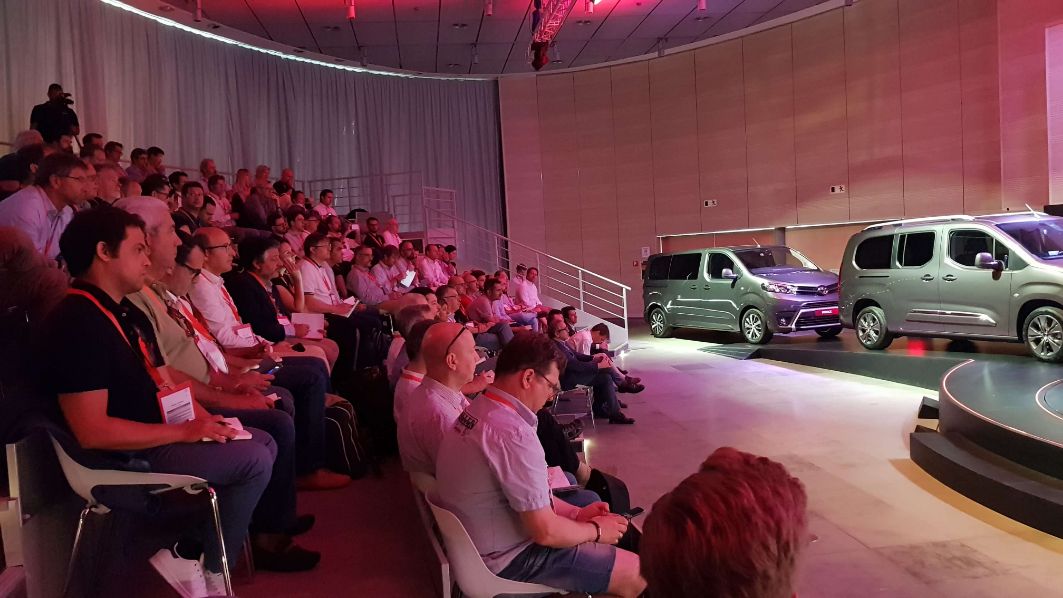 On the day, it was summed up by Vincent Dewaersegger, Toyota Motor Europe's Senior Manager for Product Communications, who confirmed that the announcement of Proace Electric is a major milestone in what promises to be a product-packed couple of years for Toyota's LCV proposition – let's check out the announcements in more detail. 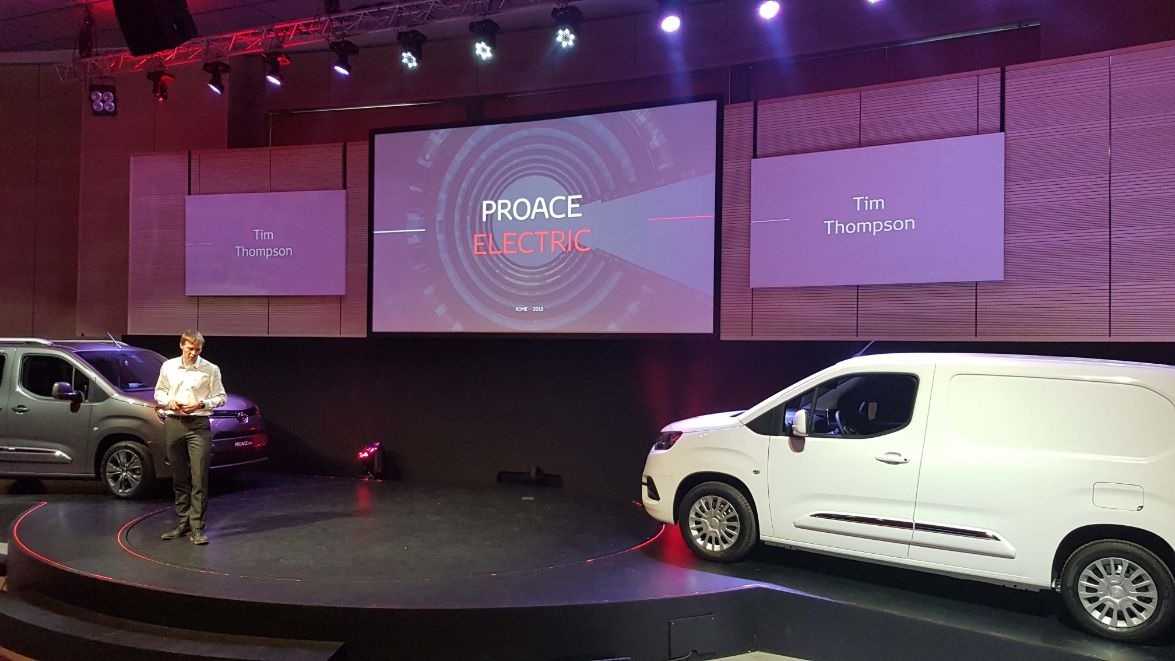 Toyota has always had its feet firmly in the Hybrid camp, so it's no surprise that alternative fuel types are coming to its LCV lineup. That's why it was great to hear Tim Thompson, Senior Manager, Marketing Management of Commercial Vehicles at Toyota Motor Europe, confirm that electric versions of the Proace & Proace City vans will debut over the next 2 years – the Proace medium van in 2020 & Proace City small van in 2021.

Charging times, range and battery sizes were not revealed in Rome – due to ongoing internal discussions – but the announcement that they're coming proves what a lot of us industry observers were already having whispered conversations about. 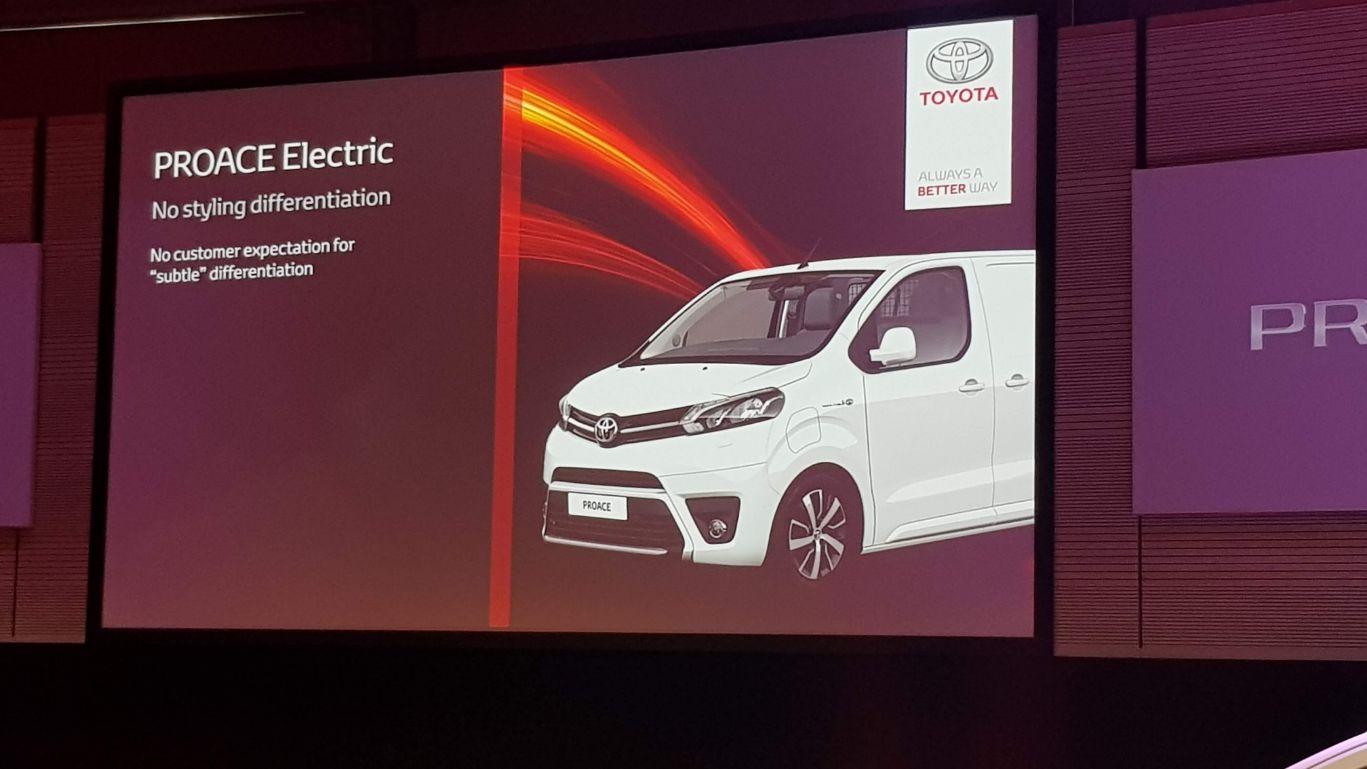 The first question that jumps to mind is why the lack of hybrid versions and a jump to straight-up battery electric version… but it's a small question when you consider the moves being made by other major manufacturers towards an all-electric future for the LCV marketplace.

These electric versions are seen by Toyota as the solution to increasing country-level focus on cleaner air zones and renewable energy sources, & I can't wait to find out how Toyota will bring their experience in these areas to these new vans.

We've already seen the new Toyota Proace City – another compact van built on the same platforms as the PSA Group compact vans including the new Citroen Berlingo & new Vauxhall Combo – but we were told a lot more about Toyota's cast-iron plans for this addition to its LCV lineup, including anticipated sales of 35,000 per year. 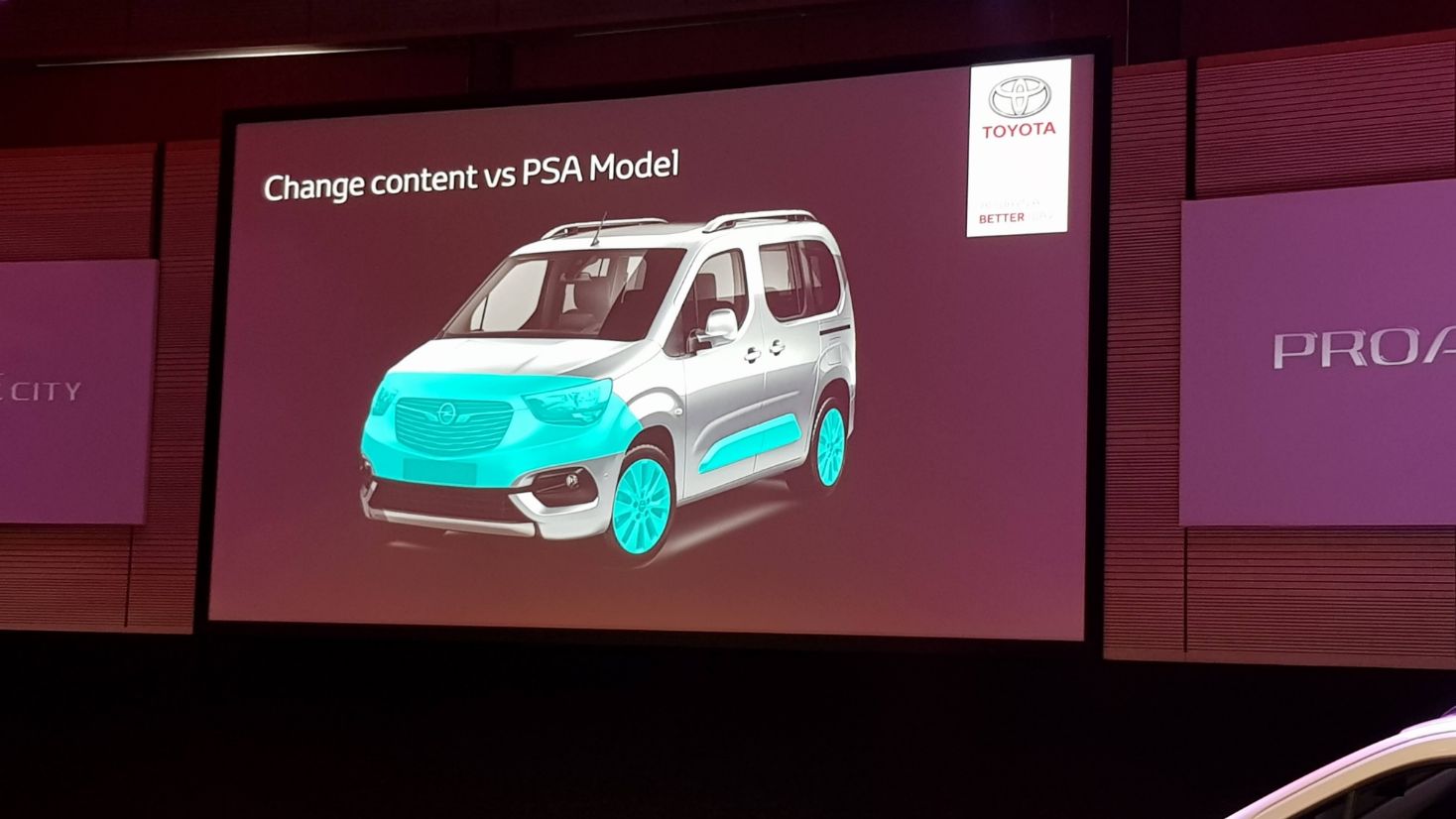 Umberto Mazzone, Press and Marketing Manager for LCV at Toyota Motor Europe, showed us clearer images of the major differences the Proace City packs to the PSA Group small vans – mainly found on the exterior styling with just a few internal differences, & a reinforcement of the fact that it is one of the few compact vans capable of taking 2 Euro palettes in its loading bay.

We had a first glimpse of its new heads-up display which can show maximum road speed, cruise control indicators, navigation, driver safety & lane departure alerts. Toyota also revealed that Proace City vans will feature a wireless phone charging station just above the dash-mounted gear stick – a very useful addition for drivers that need to be contactable throughout the day.

The feature that made me sit up and take notice was the debut of Toyota's Smart Active Vision, which uses cameras & a 5-inch dash-mounted screen to make the pack panel doors effectively transparent. It will also assist with reverse-parking and flash up proximity warnings – sounds like something Tony Stark would make! 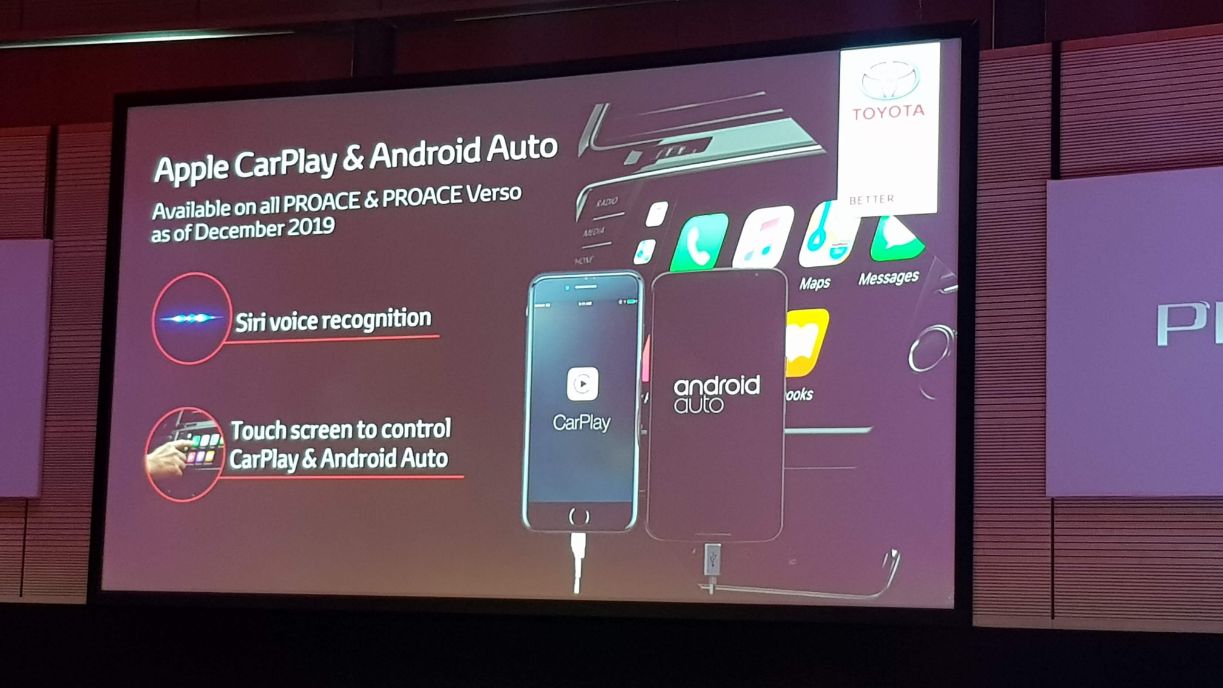 The van version of Proace City will be available for pre-order by October and in-market by early 2020, with 2 trim levels: Base and Comfort. Apple CarPlay & Android Auto have also been confirmed as options for operators wishing to take advantage.

Although announced first, I've saved looking at the Proace Black Edition until last. Why? Because I always like to end a report on something cool. Alessandro Melucci, Product Marketing Specialist LCV at Toyota Motor Europe, took to the stage & revealed that from early next year a customised version of the Proace medium van – the Black Edition – will be available across Europe.

However, a Toyota spokesperson told me that it was unlikely to hit the UK market because "Toyota UK already has the Design Edition & it would not fit so neatly into the line-up." 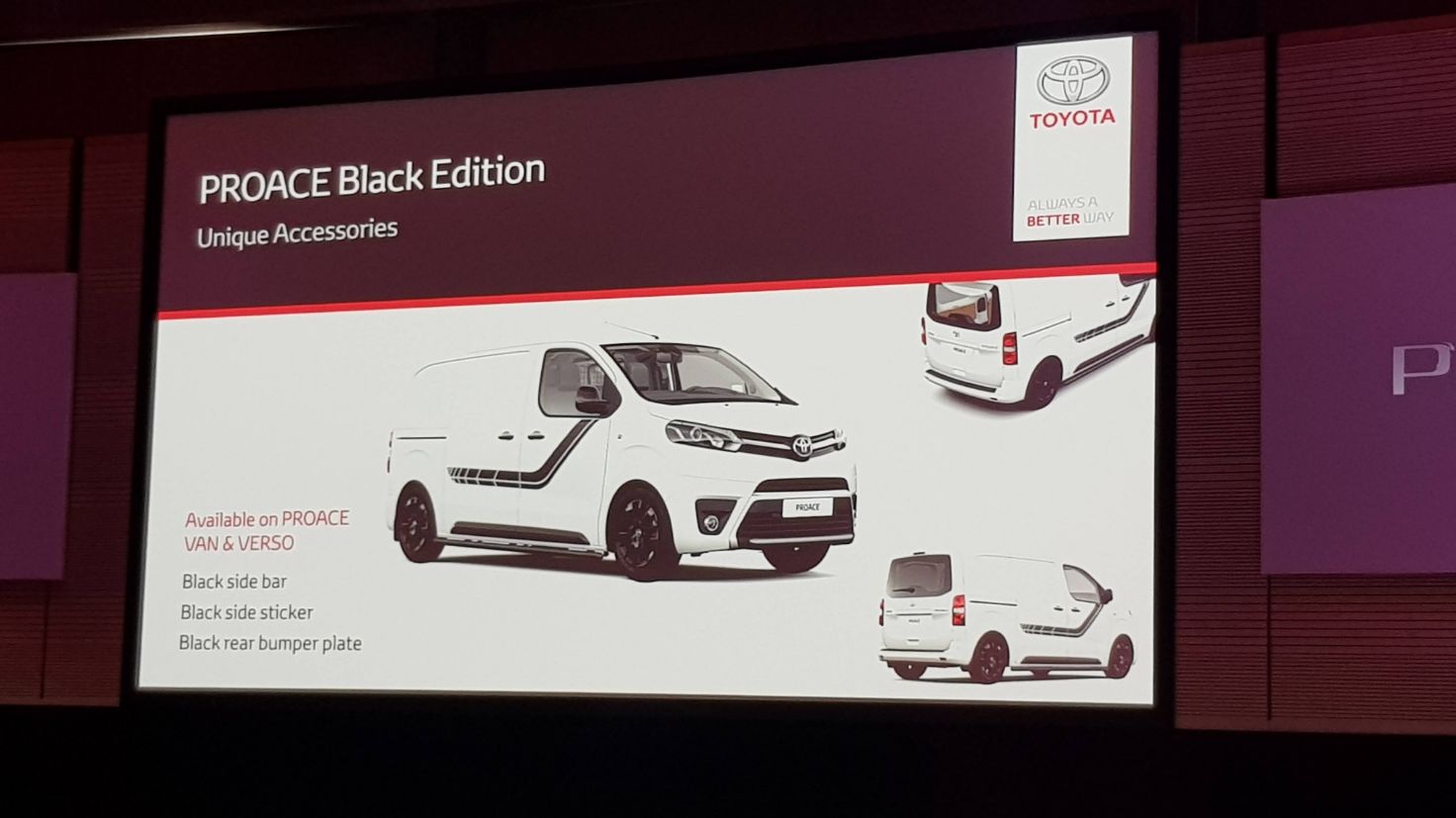 The main changes on this version of the Proace are black-gloss painted alloy wheels, black-painted door handles, mirrors & side mouldings, & a great-looking all-black interior (black door panels & silver decoration on the dash).

The Black Edition updates are available in all colours (except black) & on all lengths for both the Van and Verso Proace types. Further additions include black side bars, black side stickers & a black rear bumper plate – basically "Black Edition" isn't just a clever name, it's a state of mind. An early version was there for us to marvel over, & it looks to be a nice aesthetic addition to the established Proace range.

In a nutshell, here's a round-up of the key messages Toyota wants you to hear.

2020 is going to be a strong year for Toyota's LCV business in Europe. The Proace Black Edition will debut in January, followed closely by the Proace City in February. There will be a short pause as Proace City makes its impact felt before the first Proace Electric model debuts in September. Finally, a minor update to the Hilux pickup truck will end the launches for 2020, before 2021 sees the Proace City Electric launch.

In one swoop of announcements, Toyota's LCV offering has made the company an even more compelling one-stop shop for commercial & personal fleets across the UK. Need a medium van in a variety of styles? Proace. Need a compact van? Proace City. Need a pickup truck? Hilux. Need cars? Take your pick. Need any/all of those in electric/hybrid formats? Done and done!

_ Did you enjoy this blog? Why not have a listen to the latest episode of The Loadspace Podcast powered by Vanarama all about 2019 being the year of the small van right here? _