The British craving for artisan food vans is showing no signs of slowing any time soon. As more and more people in the UK seek out gourmet snacks and alternatives to the traditional dining experience, a fleet of mobile caterers have sprung up in recent years to meet the demand.

If you're looking to get into the business yourself, or just curious about good grub like us here at Vanarama, you'll be interested in which cuisine will offer the best chance of success.

To find out what the most popular food van fare is, we took a look at 700 mobile caterers registered with NCASS (The Nationwide Caterers Association) for over a year – to prove their menu's staying power – and tallied up which items appear the most.

While the most common staples of food van menus (US and British cuisine) aren't particularly exotic, the rest of the top ten proves that we Brits aren't afraid to go on a culinary adventure.

From Belgium to the Caribbean, this variety in cuisines shows the UK is looking for some variety in what's offered by mobile caterers.

Although we might like to see ourselves as sophisticated worldly eaters, meat and potatoes still dominate the British palette if the most common food van menus are to be believed. Like our cousins across the pond we're also a sucker for BBQ, fried chicken and top-notch burgers.

It's certainly interesting to see fish in more demand than pizza. From our research this seems to be a combination of the nation's love for the chippy and also the large number of Caribbean and Mediterranean-themed vendors offering seafood-heavy menus.

It's Official, Coffee Is More In Demand Than Tea

Where would we be without coffee? Still in bed probably. Whether you're an early bird at a music festival or frequently pass a pop-up on the way to work, you'll know why coffee is the beverage of choice for mobile caterers.

It doesn't take long for alcoholic beverages to make an appearance though, with both lager and ale cracking the top five showing that we're partial to a tipple with our food-on-the-go.

From Cardiff To Leeds, The UK's Food Van Hubs Mapped

There's quite a lot of variety in the UK's food van capitals. The major trend seems to be that they wisely steer closer to larger cities – getting closer to where the action is and maximising their opportunity to gain pitches at localised events. 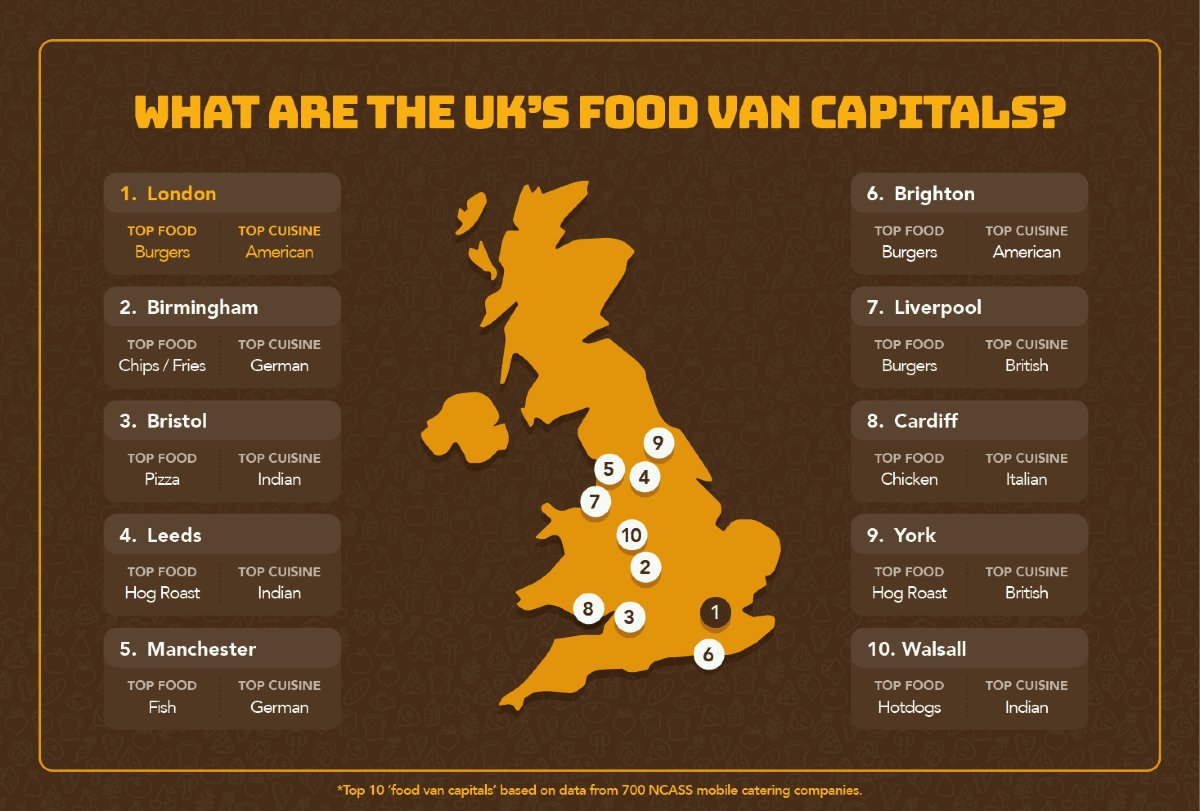 Mobile Caterers Are Still Lagging Behind When It Comes To Allergies

While the food service industry as a whole is pivoting to accommodate more dietary requirements and moves away from a meat-dominated menu, food vans seem to be slower on the uptake.

While this isn't to say there aren't a growing number of vendors catering to people that prefer vegan alternatives, a look across this subsection of caterers shows that just over a quarter specifically market themselves as offering vegetarian and vegan options while only 11% claim to provide gluten-free menu items.

Is The Food Van Lifestyle For You?

While it may seem like a romantic idea to travel the country and bring people joy with your artisan take on a cheese toastie, there are a number of hurdles that must be crossed if you want to make a success out of a mobile catering business.

By far the biggest one is competition. NCASS alone has almost 6,000 caterers all contending for the most desirable pitches at the UK's biggest events. The ratio of businesses to available spaces is quite stark, however, as based solely on NCASS members…

Of course, not every food van is registered to NCASS so the competition will be even tougher than these already eye-opening figures.

To provide more context into the day-to-day of running a successful food van, we asked owners about their highs and lows, whether they feel the market has become saturated and what the secret to success is.

"The most rewarding thing about owning a taco truck is that I do everything. I cook, clean and serve so when I'm handing my product out it's humbling hearing the reviews you get. However, the politics in street food is crazy. As a newcomer, I wasn't allowed to trade at food markets in Bristol for years. Plus, when you book certain events, they put your pitch miles away from the food court as your van is a different size to the standard 3mx3m gazebo."

"Research your product to make sure there's demand and test what's out there by eating from people that already do your product. Look up all food markets in your area and see if they have someone doing your product and of you can join. Also, a) don't lower your prices to get work, b) show people what they are getting for the money i.e. experience, c) become a self-contained unit with power/water and d) offer fast service with a set menu."

Is the Market Too Crowded?

"It's funny, as I wasn't a chef when I started this journey, I don't have a famine mentality so I'm not offended when people want to start. It all depends on the passion. The market's full of people without passionate food so in that respect it is saturated but cream rises to the top. I would start again today if I wasn't already 5 years deep."

"We love the interaction with our customers and that we get to serve them face to face, often while they're having a great time! It's also an amazing feeling when you 'beat the queue' after getting a really large number of portions out in a smooth fashion. We've been able to do so much travelling and have been to over 70 countries, which gives us so much inspiration."

"However, it can be unpredictable and often feels like a bit of a gamble. If ticket sales are poor or the weather doesn't cooperate you can have a really miserable time and lose a fair bit of money for the privilege! But we've learned to be stoical and a smasher usually comes next so it balances out."

"Just go for it but it worked well for us to start out really small and to try and keep set up costs to an absolute minimum. We did small jobs to start with and very gradually worked up to bigger events and were able to improve our equipment, extend our ability to afford pitch fees, buy larger amounts of stock and weather losses etc, as we went. Do also always ask questions about how many other traders there will be, what they will be selling and how many people they hope will attend, you gradually get a better sense of what ratios work."

Is the Market Too Crowded?

*"*I think it may be a bit oversaturated in London but you can definitely still make a good living and find a way in if you have a good and original idea! We do feel lucky to have started back in 2009 when it was just beginning to take off, it's allowed us to build up a solid foundation before it all went too mad."

For more van insights, including a look at the eco-friendliest fleets and the UK's current problems with parking or, if you're still in a foodie mood our study into whether tradespeople are a fan of our brews. Whatever you're after, look no further than Vanarama's blog.