When a tradesperson visits your home to carry out some work, there's one tool that is much more important than a hammer, chisel or drill needed to complete the job. That tool is… tea! Brits drink more than 60 billion cups of tea per year, that's 909 cups each! Tea is often consumed at work during busy periods to keep energy and morale up, and tradespeople deserve it more than most due to the physical nature of their jobs.

Since a nice cup of tea is essential to the life of a tradesperson, Vanarama conducted a UK-wide survey to find out whether the unwritten rule of offering a brew still being adhered to? Do tradespeople enjoy the tea prepared from them and just how much tea do they consume every week?

41% Of Customers Don't Offer A Drink To A Tradesperson

However, despite tradespeople obviously being fond of a nice cup of tea while hard at work, a large number of customers no longer bother offering one. 41% told us that customers never offer them a drink at all. Only a lucky 11% said that their customers always offer them a drink to help them through a hard day of work. 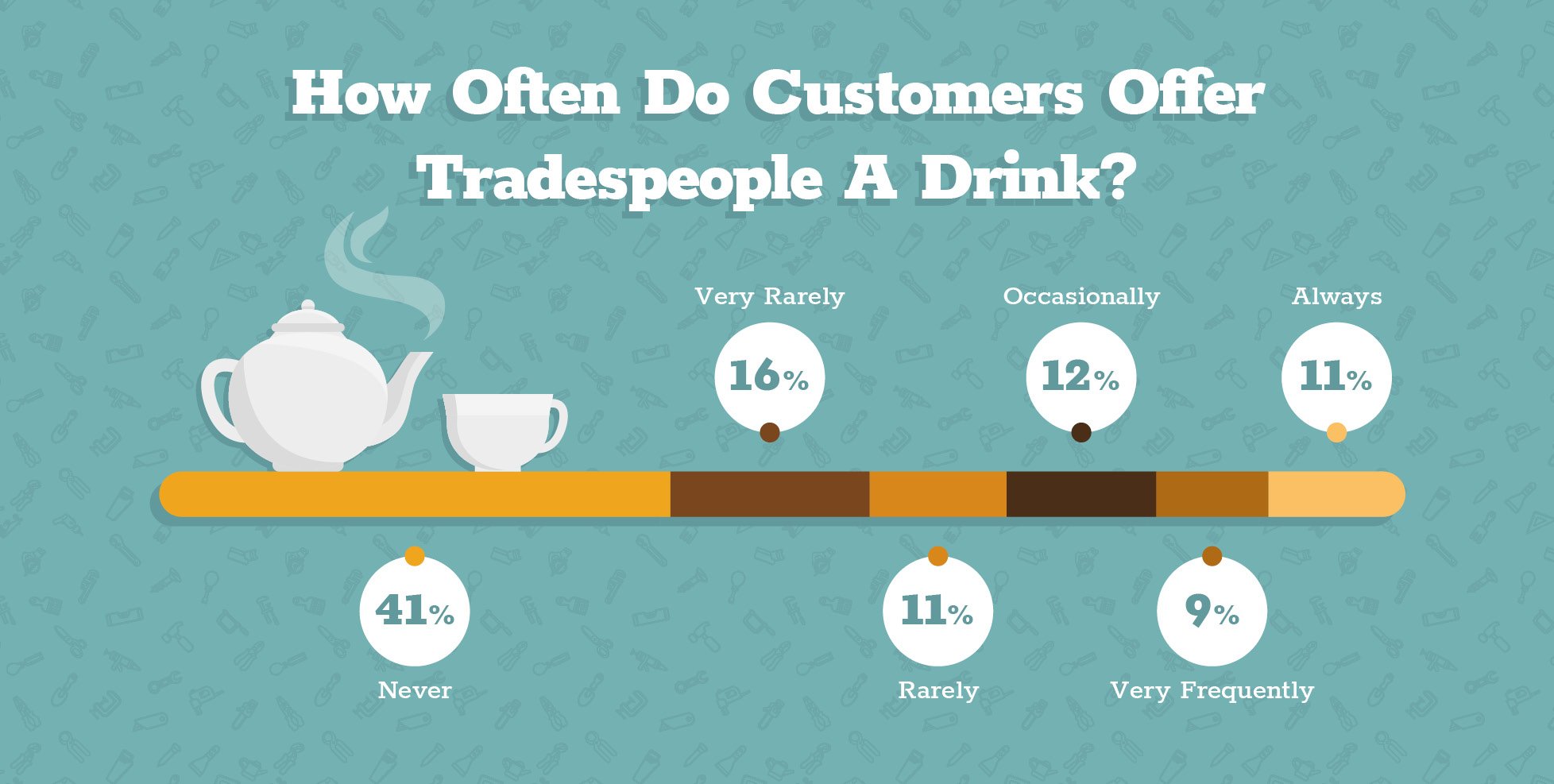 1 In 5 Tradespeople Hate The Tea You Make

Even when customer's do make their tradesperson a brew that's no guarantee that it will be up to code. 1 in 5 admitted to Vanarama that they would rate the tea that their customers make for them as 'poor' or 'very poor'. Generally, 52% of tradespeople rate the standard of the tea prepared for them as only 'acceptable'.

Customers in the East Midlands make the worst cup of tea according to feedback from our survey, with 32% rating cups of tea made for them at customers' homes as 'poor'. 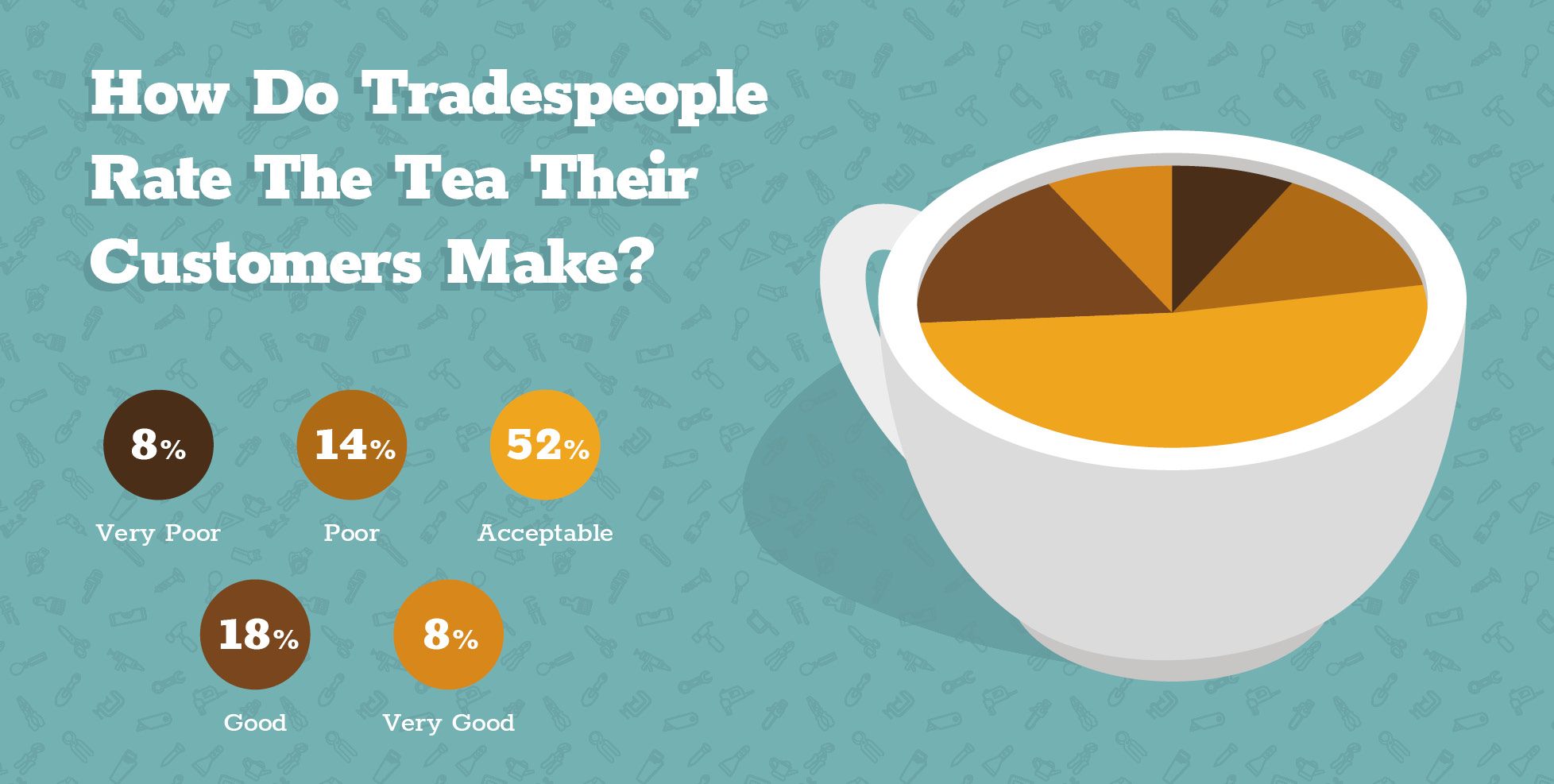 Since some of the public seem to be getting it wrong when it comes to making a quality brew, we surveyed tradespeople to find out what makes up the perfect cup of tea for them. Their favourite type of tea is English Breakfast, taking 30% of the vote. This was closely followed by a Builder's Brew (17%) and Black Tea (12%). Beware – don't prepare your next electrician or plumber an Earl Grey! The tea is only favoured by 5% of tradespeople. 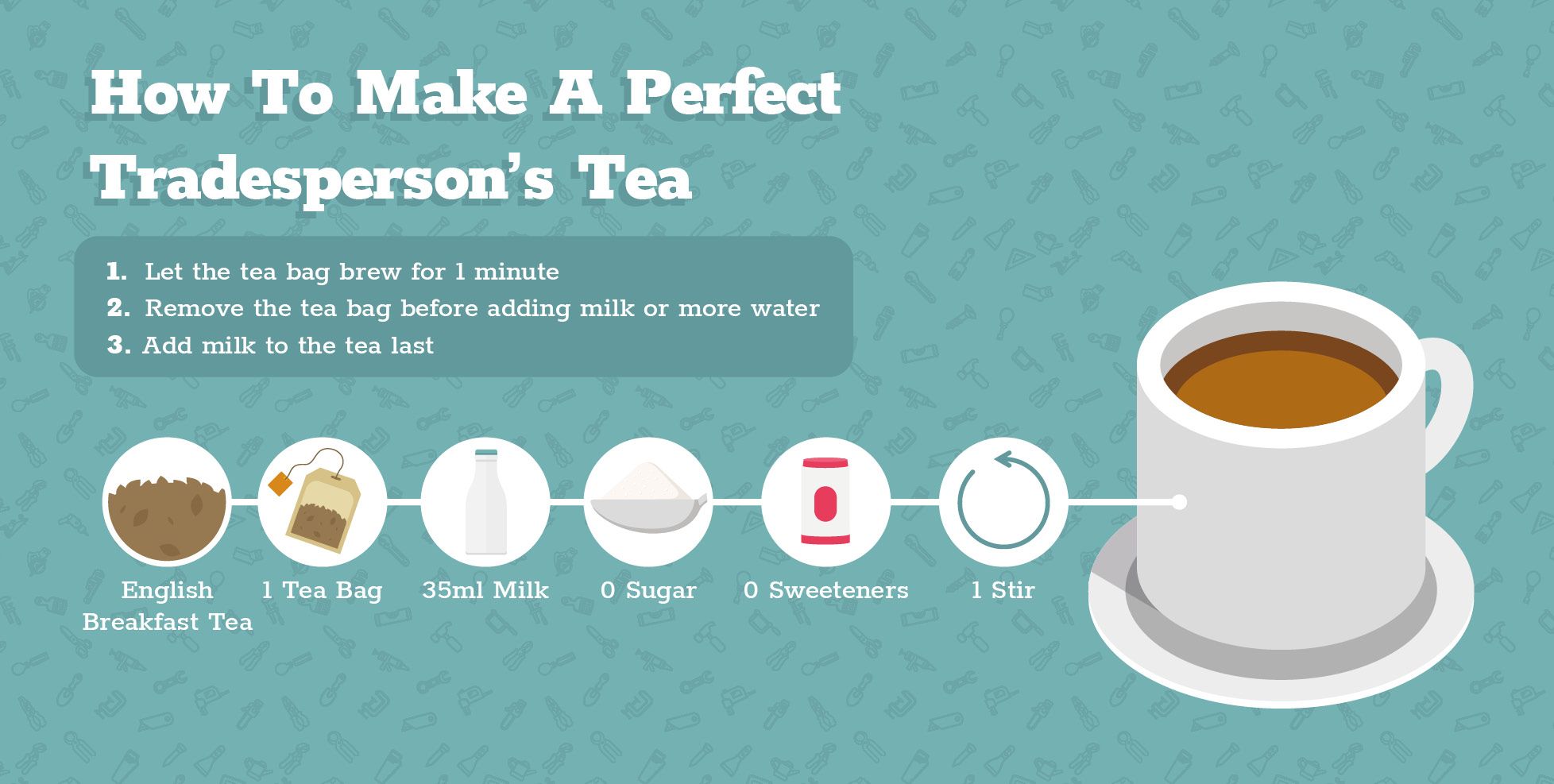 Over half (54%) of tradespeople opt for the healthy option and prefer no sugar to accompany their cup of tea. However, 16% do add 1 sugar to their brew, and 19% add 2. Most respondents stirred their tea once (20%), with 15% not opting to stir their tea at all. 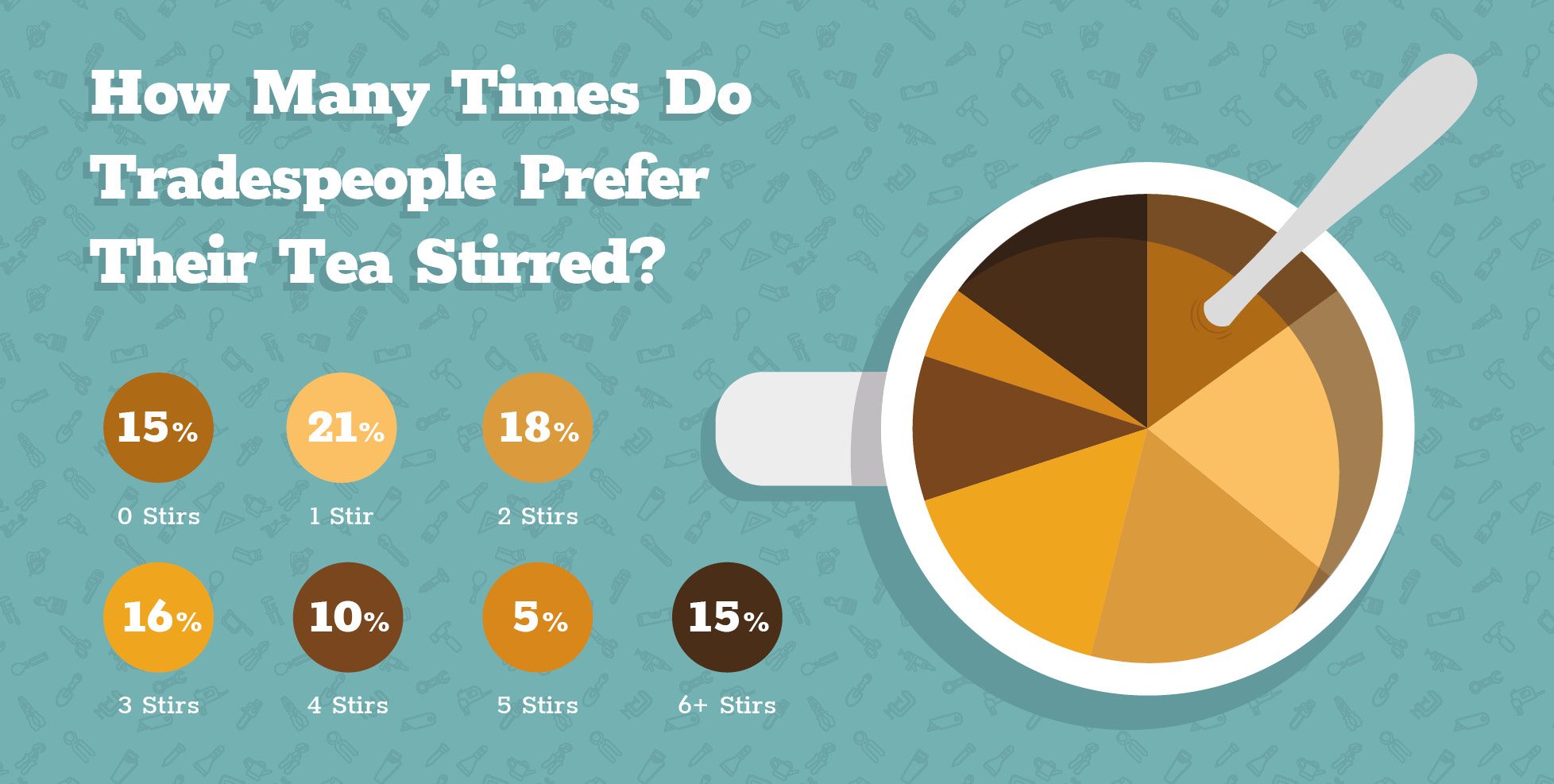 Generally, 1 minute is the ideal time to let the teabag brew for most, preferred by 3 in 10. 26% like to brew their tea for two minutes, and a surprising 8% like to brew theirs for over 5! Vanarama also asked tradespeople up and down the country to tell us what their favourite shade of tea is, and it was a close-run thing! The eventual winner was a digestive colour (D) over the less milky golden brown (C). 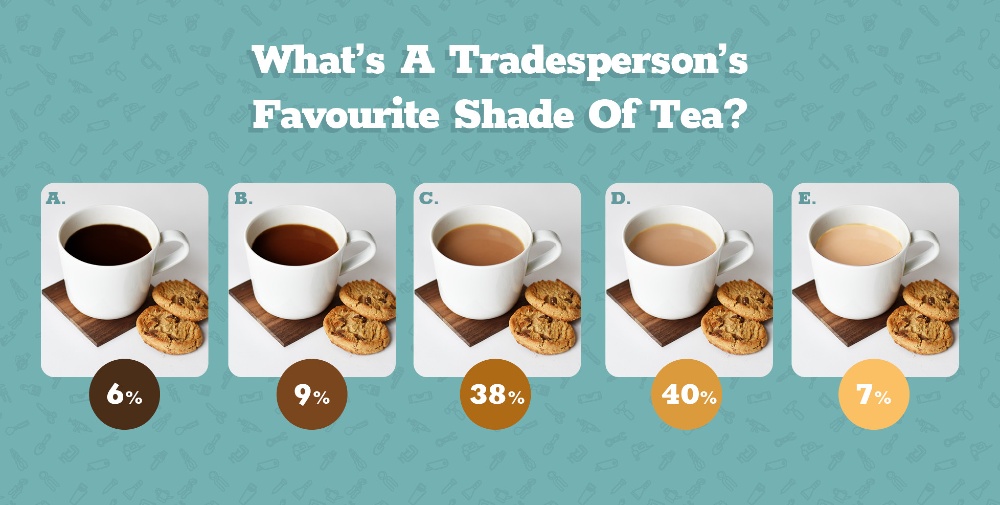 The brand of tea used also goes a long way to making the perfect brew for a tradesperson. Although PG Tips is the UK's favourite, tradespeople (22%) prefer Yorkshire Tea for their brew above all other brands. PG Tips comes in at a close second, favoured by around one in five. 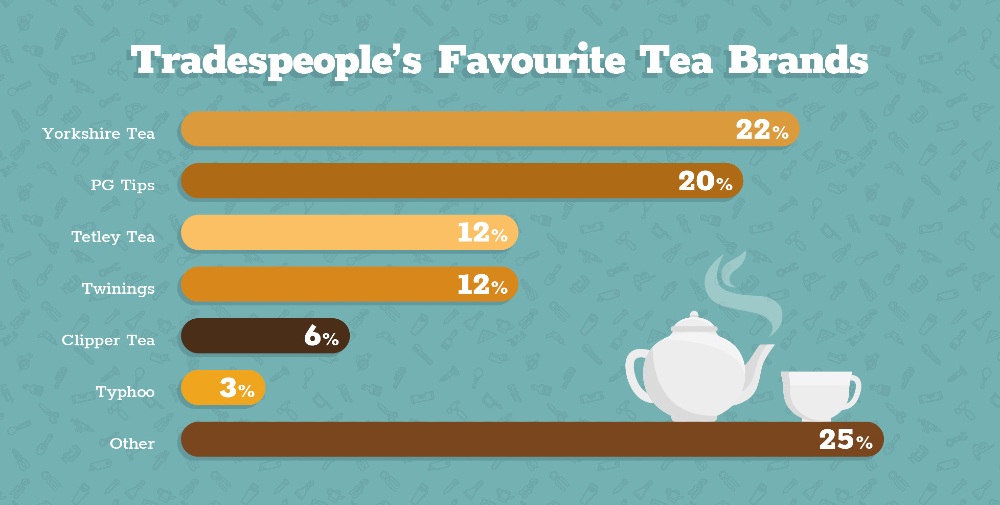 No cup of tea would be complete without the perfect biscuit to go with it… and tradespeople are a fan!

A Quarter Of Tradespeople Eat 20 Or More Biscuits Per Week

A staggering 29% told Vanarama that they eat over 20 biscuits per week while working at a job. The humble chocolate digestive is the tradesperson's favourite biscuit, followed by a Chocolate Hobnob and Shortbread. 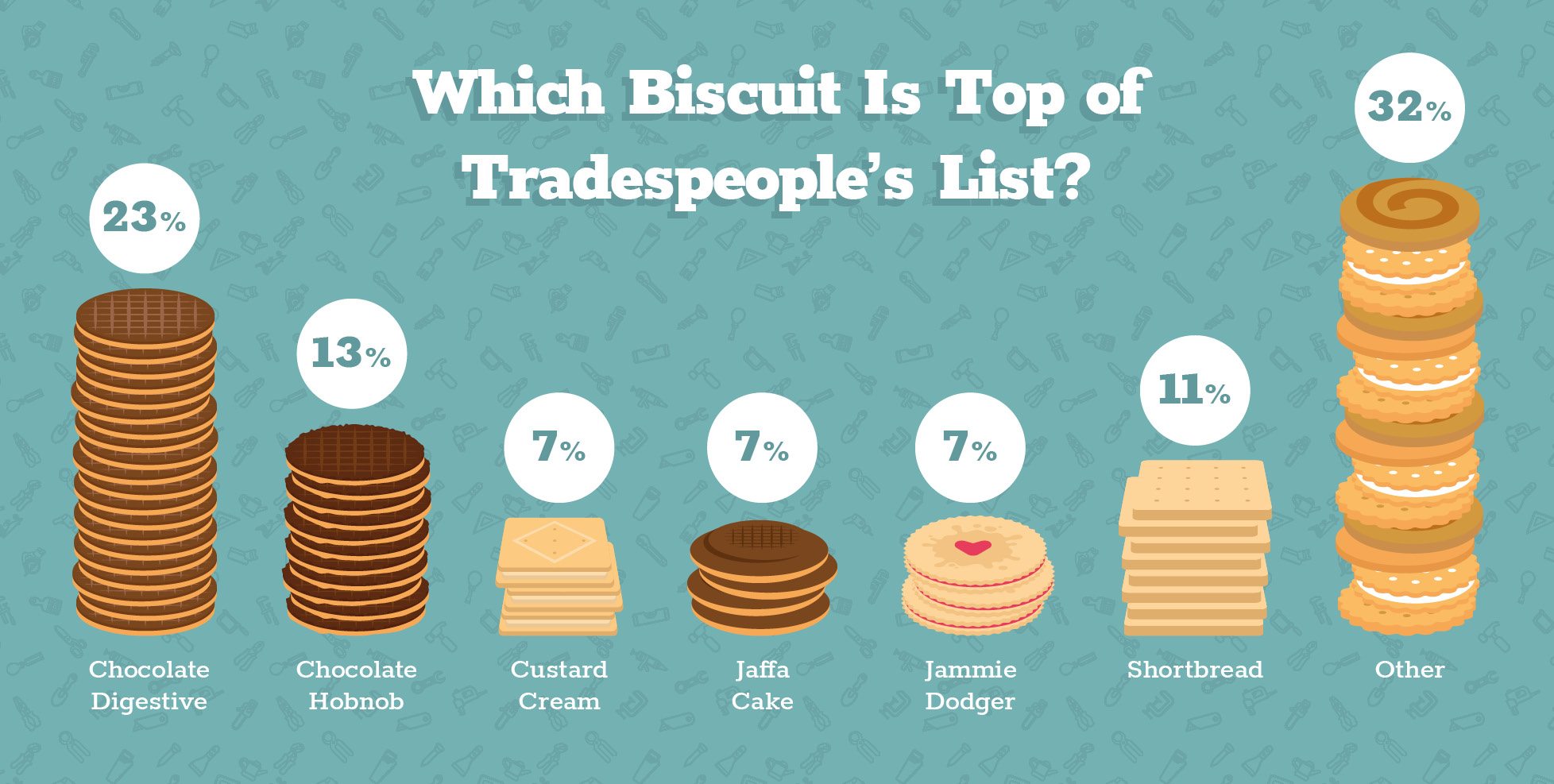 There are 84 calories in a single chocolate digestive. That means that 1 in 4 tradespeople is consuming at least 1,680 extra calories per week by munching on their favourite biscuits while on the job. However, 40% told us that they don't normally consume any biscuits as they keep an eye on the extra calories.

Vanarama can't promise that your customers will always make you the perfect cup of tea, but we can promise you that your vehicle will never let you down. All of our brand new vans available for leasing come with multiple cup holders, meaning you'll always have somewhere to put your brew!