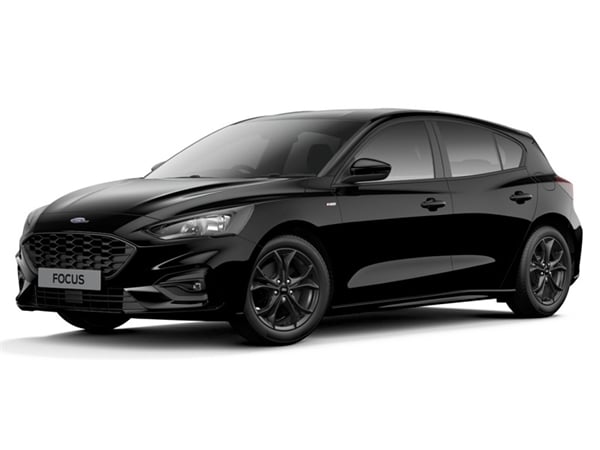 Why Lease the Ford Focus Hatchback?

Ford's much-improved Focus gets petrol EcoBoost technology in a higher-performance guise if you go for the 1.5T versions. Jonathan Crouch has been trying the car....

Ford's Focus will be a rare sight on these shores in 1.5T petrol EcoBoost form but it doesn't deserve to be. This engine marries together excellent performance with impressive economy - and makes you question why private buyers are really so transfixed by diesel power in the UK. After all, a Focus 1.5T gets to 62mph in under nine seconds, yet averages over 50mpg. What more could you ask for.....

EcoBoost petrol technology has proved to be a winner for Ford. Their three cylinder 1.0-litre unit is now the engine of choice for most buyers in Fiesta and Focus models - and it's even been installed into the larger Mondeo. Bt not everyone wants a powerplant as small as that. So the engineers set about using the same efficient technology to create a slightly bigger unit, the 1.5-litre EcoBoost engine you can now find in the much improved Focus family hatch. Why the choice of a 1.5-litre size for this powerplant? It's apparently down to needs in the growing Asian market, where vehicles with an engine size of 1,500cc or less benefit from significant tax advantages. The objectives for the development team behind this 1.5T unit were to create a petrol engine that produced similar power and torque outputs to that of a 1.6-litre diesel - yet one that also delivered class leading fuel economy as well as very low CO2 emissions. Have they managed that? We borrowed a Focus 1.5T to find out.

With this improved Focus, Ford has tried to balance the car's traditional reputation for driving enjoyment with a little more comfort. Hence a series of suspension updates. The biggest change is the uprated dampers, but Ford have also fitted firmer bushings, reprogrammed the stability control to be more progressive and revised the electro-hydraulic steering. Focus customers also enjoy a quieter ride, achieved by thicker carpets, thicker side window glass, and improved engine bay insulation. The 1.5-litre petrol EcoBoost powerplant we're looking at here features an innovative aluminium cast manifold integrated into the cylinder head. This was first introduced on the 1.0-litre EcoBoost unit, saving weight and allowing the manifold to heat up quickly to achieve maximum efficiency. This all-aluminium approach is much lighter than traditional constructions and eliminates the need for a gasket. As for the performance of this 1.5T EcoBoost model, well in the 150PS guise we tried, it's certainly eager, the 0-62mph sprint being dispatched in 8.9s en route to 130mph. Go for the pokier 182PS version and the sprint time improves to 8.6s at no cost to efficiency.

The improved Focus that gets this improved engine is a pretty good looking thing. Especially at the front end which wears its Aston Martin lookalike chromed grille so much more elegantly than the somewhat pan-faced Fiesta does. The interior is now smart enough to start to rival that of a Volkswagen Golf. The fascia design is certainly intuitive, the previous model's button-strewn centre stack and steering wheel here being tidied up considerably. The black satin trim and chrome detailing contribute to a cleaner aesthetic too. Many of the controls are marshalled by the SYNC 2 high-resolution, 8-inch colour touch screen system. This includes voice control for 'easier' access to audio, navigation, climate control and compatible mobile phones. We'll reserve judgment on that one. One thing that's undoubtedly an improvement for Focus folk is practicality. The centre storage console offers more space as well as a new sliding, integrated armrest, accommodating a variety of bottles and cups with the capacity to simultaneously hold a litre water bottle and a 400ml cup.

Despite its strong showing on paper, this 1.5T EcoBoost petrol Focus model will account for a tiny proportion of the model's UK sales. Partly that's because most buyers on these shores will prefer to go for the 1.5-litre TDCi diesel alternative. And partly it's because Ford is only offering the 1.5T petrol derivative in top-spec 'Titanium' and 'Titanium X' guises, so it's not cheap, prices starting at just over £21,000. Go for the 'Titanium' and you get the unit in 150PS form. Find the £2,700 premium to graduate up to 'Titanium X' spec and you get the nit in pokier 182PS form. Whatever your choice, there's an £1,100 premium to pay if you want the estate bodystyle rather than the standard five-door hatch. The improved Focus range ushers in a whole raft of clever technology. The Perpendicular Parking system is a development of the old Active Park Assist to guide the car into a parallel parking manoeuvre, but the addition of extra sensors now opens up features like Cross Traffic Alert, which warns drivers reversing out of a parking space of vehicles that may soon be crossing behind them. Ford also has improved its popular Active City Stop collision avoidance system, which pre-charges the brakes and - if the driver still does not respond - reduces engine torque and automatically applies the brakes to reduce the impact of collisions.

The stats here tell the story. The 150PS Focus 1.5T variant we tried delivers 51.4mpg on the combined cycle and 127g/km of CO2, figures exactly duplicated from this car in 182PS guise. Contrast that with an entry-level Focus using the brand's old-tech 1.6 Ti-VCT engine in 85PS form - 47.9mpg on the combined cycle and 136g/km. So with this Focus 1.5T, you get twice the performance of a baseline model and a 10% improvement in running costs at the same time. Have cake: eat it. It's as simple as that. The 1.5-litre powerplant also features an innovative aluminium cast manifold integrated into the cylinder head. This was first introduced on the 1.0-litre EcoBoost unit, saving weight and allowing the manifold to heat up quickly to achieve maximum efficiency. This all-aluminium approach is much lighter than traditional constructions and eliminates the need for a gasket. As a consequence, the maintenance requirements are reduced and the longevity of the engine's components is enhanced. Servicing costs are also reduced as the timing chain does not have to be changed periodically.

The changes made to this Focus have been labelled a mid-life facelift, but it's probably the most fundamental update we've seen made to an existing car. Engines, bodywork, fascia, suspension, technology - it's all change. Despite the grille being the most obvious alternation, this isn't one of those stereotypically 'lazy grille, headlights and bumper' refreshes. While the original third generation Focus was fundamentally a very good car, it needed work to elevate it to a point where you'd view it on a par with the Volkswagen Golf Mk 7. Which is now possible. That guppy-mouthed front end has been replaced by a much sharper look and that alone may convince many, but the interior also looks a good deal classier. The chassis and engine changes add real substance to the Focus' argument. Is it back at the very top of its game? It's early days yet, but the signs are promising. We're looking forward to the November launch and a chance to try the car for ourselves.