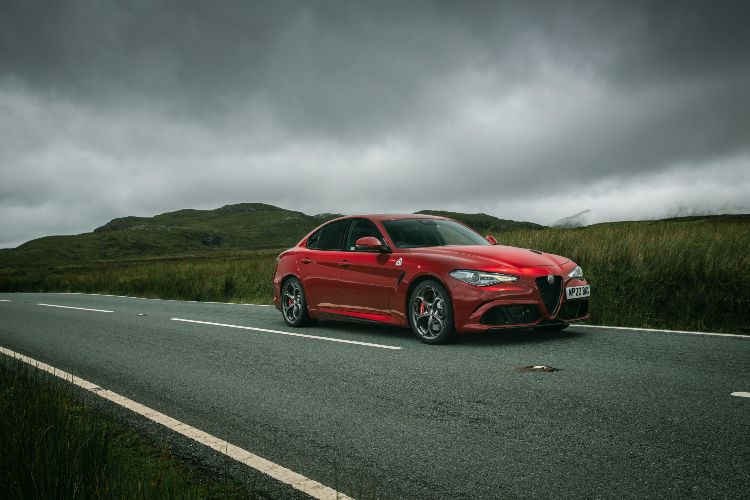 With the impending switch to electric cars looming in 2030, there are many test drives that feel somewhat valedictory these days. Vehicles with lusty V12 engines, the exotic hypercars, some of the more extreme hot hatchbacks, homologation specials… lots of the things that make us car lovers, well, love cars, they’re on borrowed time. You drive them and you always feel like you’re giving the machine in question a fond farewell, saying your private goodbyes before it is killed off for good.

In a few weeks, we’ll be bringing you a review of the Ford Mustang Mach 1, which is just a truly glorious slice of Americana, but the feeling is that it might be a wonderful final hurrah for the iconic Pony Car. How long can Ford continue to get away with building a V8 anachronism like that in an environmentally conscious age?

And here’s another car that we think might not have the most glittering long-term future prospects, the Alfa Romeo Giulia Quadrifoglio. This type of car is called a ‘super saloon’, which is a process which takes an ostensibly ordinary 3-box, 4-door saloon car and then stuffs a socking great engine of some kind into the front of it, all while keeping the looks stealthy and underplayed.

Done right, super saloons can be some of the best cars in the world. But how much longer can they realistically continue to exist? Having been honed since BMW first punted an M5 into the world in 1984 (yes, we know there were a couple of M535i models prior to that – we’re talking FULL M5 here), and not ignoring the fact that Jaguar fans might claim the Mk2 3.8 of the 1960s was the true progenitor, a huge part of the appeal of a super saloon is the crazy juxtaposition of sensible, sober body with truly mental drivetrain. Sure, you can pack a powerful electric motor into a saloon car – Porsche and Mercedes-AMG are already doing so with the Taycan and EQS 53 respectively – and you get plenty of the speed, but you don’t get all the noise and drama.

In and among the pantheon of super saloons that have risen up over the past 40 years or so, however, the Giulia Quadrifoglio might very well be the best of its particularly special kind. It launched in 2016 and the ingredients were spot on: handsome yet urbane bodywork, only discreetly adorned with Alfa’s fabled ‘Cloverleaf’ emblem on the front wings, 4 exhausts and some bigger ‘Teledial’ alloys; a sporty but practical interior; and then a demented twin-turbo 2.9-litre V6 petrol engine under the bonnet, which not only delivered a fulsome 510hp and 191mph top speed, but which was also reputedly related to a Ferrari V8.

Updates for the 2020 model year improved the one weakness of the Giulia Q, namely sub-par interior finishing, and a couple of halo GTA and GTAm limited-build-run specials have been and gone in numbers of no more than 500 in the interim. But is the ‘standard’ Quadrifoglio still a car that should be revered, or is it something that’s ready to be put out to pasture? 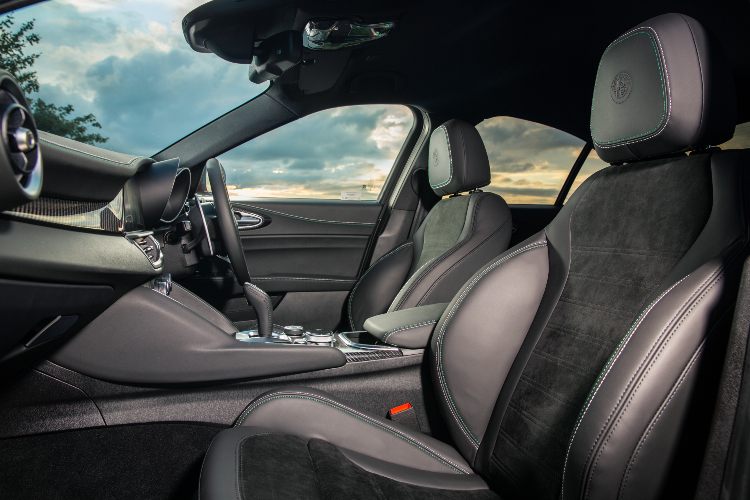 Nigh-on everything. Honestly, the Giulia Q is one of the greatest cars we’ve ever had the privilege of driving, so all this talk of the incoming small crossover-SUV, the awkwardly named Tonale, saving the company feels particularly galling when Alfa has already given us a world-beating product in the form of this super saloon. Mind, that didn’t help the company much in January 2022, when it only shifted 98 units across the whole of the UK. In the same month, Audi sold around 8600 vehicles…

Anyway, the exterior styling is a subjective thing (looks amazing in pretty much any colour but the absolute pinnacle is Montreal Green, without a shadow of a doubt), so we’ll leave you to look at the pictures to decide whether you like it or not, and instead say it’s the interior where the most praise should be directed. When it launched 6 years ago, it felt like 3 of the 4 teams who had worked on the car had submitted their homework on time, while the 4th had clearly been tossing it off ahead of the production deadline. So while the Giulia Q’s styling was pretty, the chassis was heavenly and the powertrain was majestic, the interior was way off the pace – compared to both the rest of the vehicle and the prevailing class standards of the time.

One of the main problems was a gear lever with sharp edges on it just where you put your fingers to activate a gear change, although cruddy plastics for the infotainment control wheel and some notable storage issues didn’t help either. In truth, while the Alfa’s cabin had plenty to recommend it, in places it felt slapdash and rushed, just so the car could go on sale at the allotted time.

The 2020MY updates, though, addressed pretty much everything that was wrong with it. So now the gear lever is swaddled in soft-touch leather, while there’s a wireless smartphone charging pad neatly incorporated into the area underneath the central armrest. Many of the ropey plastics of the pre-2020 cars have been overhauled, and the resulting general ambience is one which is special and quality and yet oh-so-Italian. It’s superb in here.

Oh, and the Alfa Giulia Quad has always had THE best paddle shifts in the entire business. No arguments. 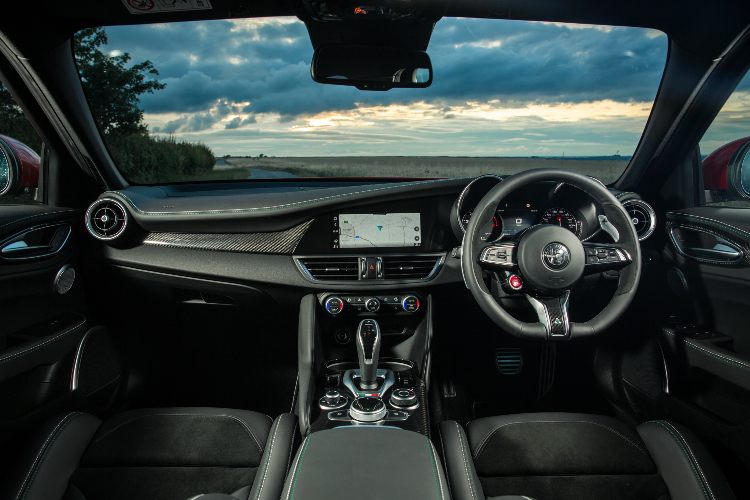 Precious little, but – if we had to pick something – it’s still the infotainment system, which lags behind those of Audi, BMW, Mercedes, Jaguar and Volvo, among Alfa’s main rivals. Again, it was improved in 2020 and is much better than it was before, but this is the one bit of the interior which feels out of step with the standards of the rest of the car. At least Alfa has given it 2 key things, which are an intuitive physical control system (rotary dial), and also Apple CarPlay and Android Auto support. Which means you can make the 8.8-inch screen look like your favoured smartphone OS, to at least bring it into the 21st century. 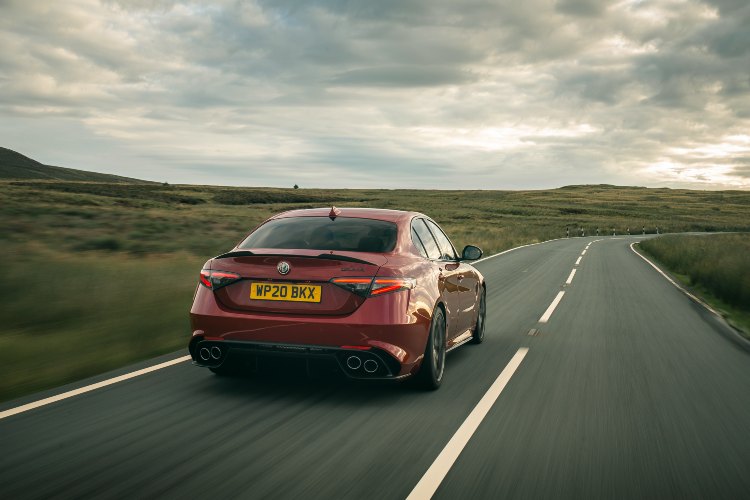 The Alfa Romeo Giulia Quadrifoglio serves up a sublime driving experience that some dedicated sports cars fail to match up to, never mind anything else with 4 doors and usable back seats. This is honestly a mesmerising thing to be behind the wheel of.

Performance from the 510hp, 600Nm V6 is outstanding. It only powers the rear wheels, not all 4 as on the larger Stelvio Quadrifoglio high-performance SUV with the same engine, but traction is only an issue in the slipperiest of conditions. In the main, the Alfa is devastatingly effective at deploying its prodigious power, which means it is quick all around the rev counter, in any gear you choose to pick. Throw in some of the most gorgeously weighted and informative steering in the business, as well as a chassis which has rear-driven balance directly (it would seem) from the gods, rather than Alfa’s engineering department, and there is no way you can fail to have a smile on your face when driving the Giulia Q enthusiastically. It’s a spectacularly good car in dynamic terms.

Where it really earns its spurs as an all-time-great super saloon, though, is the fact that it is perfectly usable day-to-day. Driven more sedately, the raspy V6 grumbles away quietly in the background, its gravelly voice an ever-present reminder you’re in something incredibly special without ever being an overly intrusive noise in the cabin, and the ride quality is exceptional. While the firm suspension and big alloys will occasionally dish up a few thuds and bangs on the worst surfaces, most of the time the Alfa soothes away imperfections in the tarmac to the point they’re imperceptible. Its 8-speed gearbox, so good when you’re smashing up and down the gears on those exquisite metal paddle shifts, becomes the epitome of cultured calm when it’s just slushing gears together for the sake of sedate forward progress, and so you’d be just as happy doing 300 miles in a single hit in the Alfa as you would taking it to your favourite circuit for a track-day outing. That, we feel, is the most telling mark of a truly talented super saloon. 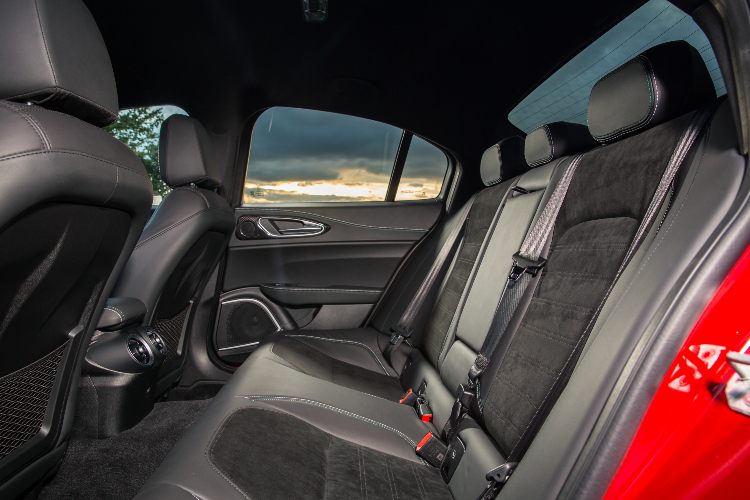 You’d be surprised. Rear passenger room is actually very accommodating, to the point that a bulky 6-foot adult can sit in the back of a Quadrifoglio in perfect comfort. We know, because a friend of ours bought a Montreal Green 71-plate car round ours and we went out in it the other day, sitting in the back of the car instead of the front.

However, not only is there plenty of room onboard, 2 cupholders up front ahead of the gear lever and some useful door bins/storage cubbies, but the Giulia Q’s 480-litre boot is one of the largest in its sector. Admittedly, we’d absolutely love it if Alfa announced a Sportwagon estate version of the Giulia Quadrifoglio, for maximum boot-space practicality, but as BMW-M3-sized super saloons go the Alfa Romeo is one of the most practical you can get. 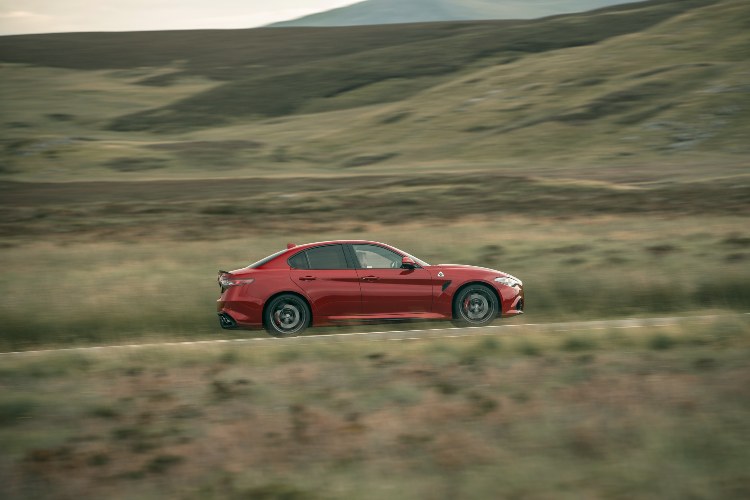 With list prices approaching £70,000, the Alfa Romeo Giulia Quadrifoglio is not going to be cheap to either lease or buy, but its asking price is less than a BMW M3 Competition, which has the same power and performance, and it’s also about comparable to the Audi RS4 and other rivals which have less grunt than it does. It’s also not too bad on fuel, with Alfa claiming 27.2mpg on the official combined WLTP cycle, with 236g/km of CO2. To be fair, we saw an overall 21mpg across 310 miles of testing, but most of that was on local roads – and not motorways, which are conducive to better fuel economy – and we were, er, enjoying the Alfa’s charms for much of that distance, so it seems OK on petrol considering the astonishing level of performance and thrills it offers. 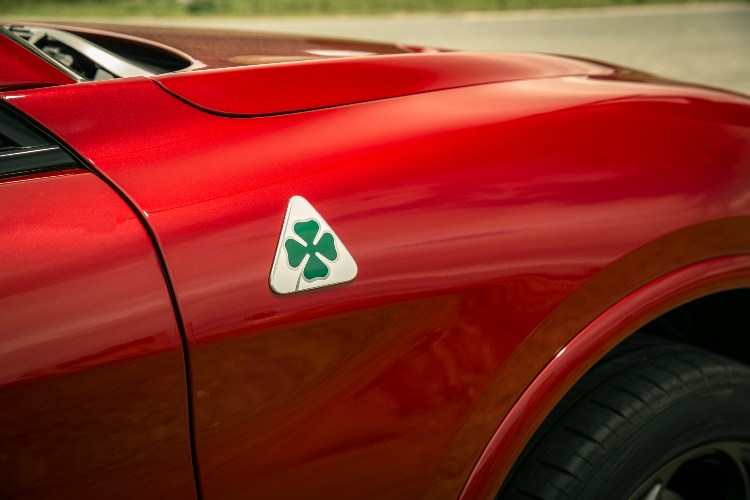 Another of those wonderfully romantic-sounding Italian words, like Quattroporte (lit. translation: ‘4-door’), Sedicivalvole (‘16-valve’) and Biposto (‘2-seat’), Quadrifoglio simply means ‘4-leafed’. It’s a nod to the green cloverleaf emblem on the Alfa’s front wings, which has been employed since the 1920s when it was the lucky-charm symbol of racing driver Ugo Sivocci. Sadly, Sivocci died while testing a race car, but crucially the vehicle he was in at the time did NOT have his cloverleaf emblem on it, so a superstition grew up among Alfa racing drivers in the aftermath to have the ‘quadrifoglio verde’ (‘green four-leafed [clover]’) plastered on the side of the car at all times, for good luck. And, for a long time in the UK, hot versions of Alfa Romeos that would have gone under the ‘Quadrifoglio Verde’ or ‘QV’ name officially were simply referred to as ‘Cloverleafs’ here.

Has a 2.9-litre twin-turbo V6, just like the Giulia Q, but the Audi’s engine is nothing like as engaging and its chassis is leaden in comparison. Also only available in Avant estate format.

For decades the standard-bearer in this class of super saloon, the current M3 is a belting car to drive… but not quite as belting as the lighter, more delicate Alfa.

Surprisingly engaging for a Volvo and technically very impressive, given it’s an all-wheel-drive plug-in hybrid, but as good as the T8 PE is, it’s no Quadrifoglio.

"In and among the pantheon of super saloons that have risen up over the past 40 years or so... the Giulia Quadrifoglio might very well be the best of its particularly special kind."

Three Things To Remember About The Alfa Romeo Giulia Quadrifoglio: