So, what exactly is the BMW 2 Series Gran Coupe? What does "Gran Coupe" even mean? Well, it means that this BMW is a saloon. Confused?

Don't worry, it's a confusing thing – but that doesn't mean it's a bad car. Basically the 2 Series Gran Coupe is a four-door version of the latest BMW 1 Series. It's distinct from the BMW 2 Series Coupe, which is a two-door model. And, by virtue of being based on the latest 1 Series platform, it's front-wheel drive. Yes, a BMW "coupe" that has four doors and is front-wheel drive.

Don't worry though, it's a lot better than it sounds. Read on to find out why.

There are few things more subjective than aesthetics, but by virtue of calling this a "coupe" BMW has set a high standard for this car's looks; by definition you expect a coupe to look…well…nice.

Honestly, it's fair to say that the 2 Series GC looks 'challenging'. Some will like it, and it certainly has a sort of presence, but it doesn't have the proportions that you'd traditionally associate with a coupe. It's quite tall, the rear end is bulky and fairly fussy and, again, it has four doors.

Still, it's a more imposing presence than the 1 Series hatch on which it's based, and some will prefer the fact that this looks like a bigger, more 'proper' BMW saloon-type car. There's a good chance it will age well too. Plenty of people poured derision on the Chris Bangle era BMW stuff – the "flame surfacing" era of the original BMW 1 Series and the distinctive 2003 5 Series – and those cars have aged very nicely indeed. 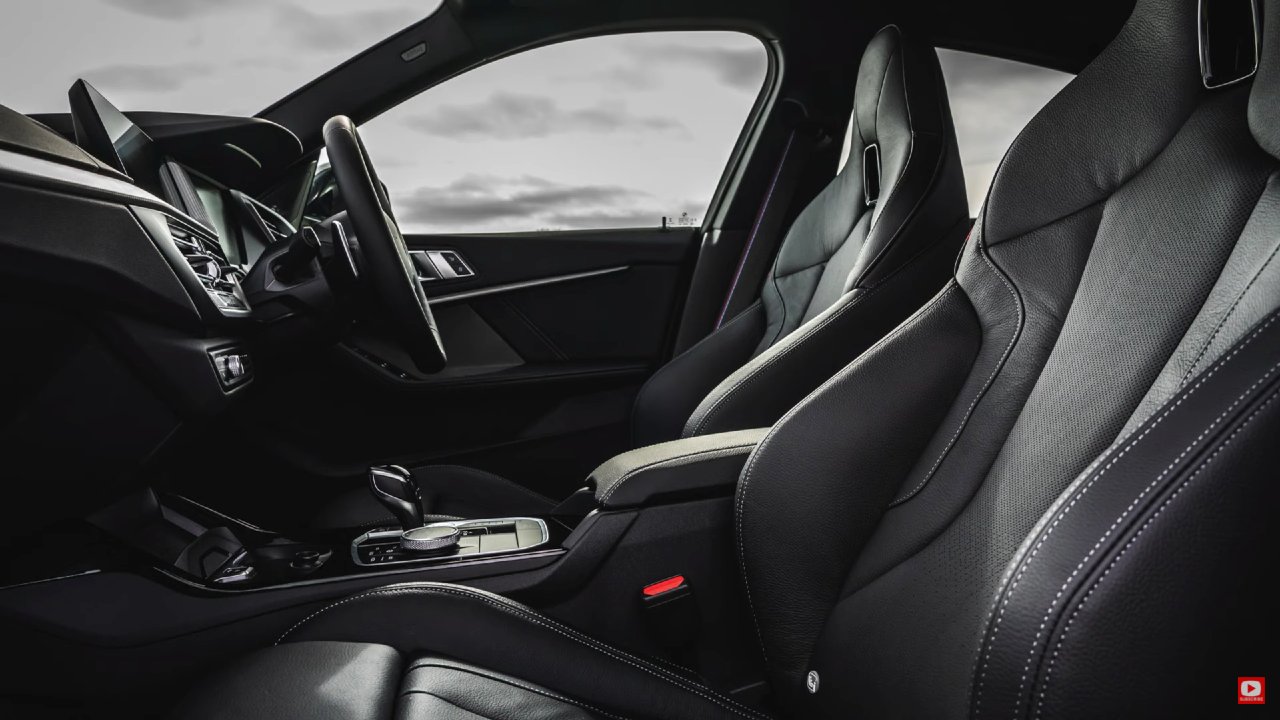 Inside the cabin is lifted entirely from the 1 Series hatchback, which also means it has plenty of similarities with the latest 3 Series cabin, albeit its built to a less high-quality standard than BMW's mainstay executive saloon. Still, it's one of the nicest cabins around at this sort of money; the 2 Series Gran Coupe is a car that's much easier to appreciate from the inside than it is from the outside.

BMW's exterior design has gone through a few major aesthetic reforms over the past couple of decades, but its cabins really haven't. They've gently evolved. And that's good because you know that the intuitiveness and sense of solidity has been honed over a long time. BMW's iDrive infotainment system is getting better all the time, and the 2 Series GC comes with wireless Apple CarPlay and Android Auto in any event, so BMW's proprietary system can be largely bypassed if desired.

Only two trim levels, Sport and M Sport, with a generous standard kit list that includes alloys, air conditioning, iDrive, navigation, cruise control. It's more than enough, but most buyers will go for an M Sport car, which includes a fully digital instrument display and has a sporty body kit including lowered and stiffened suspension.

The Practicality Of The BMW 2 Series Gran Coupe

The four-door styling of the 2 Series GC means it loses a big swathe of the practicality of the 1 Series hatchback on which it's based. That said, the boot is bigger by volume than the 1 Series, by 70 litres (430 vs. 360), and BMW has tried to overcome the fundamentally hampering issue of a small aperture by giving the rear bench a 40/20/40 split, including pull handles at the front of the boot to get the seat backs down. There's a flush loading bay too, making it easier to slid those prototypical golf bags into, and there's a decent storage space under the boot floor.

In fact, there is a good argument to be made about the 2 Series GC being a bargain BMW 3 Series. It's only 14cm shorted in the wheelbase and the boot is only 50 litres smaller. Having said that the 2 Series GC can feel a little tight as a family car. It will pass as one, for sure, but rear legroom is on the tight side and the low "coupe style" roofline eats into headroom.

The 2 Series GC feels slightly skewed towards the company car market – towards fuel economy, that is. So at the base is a 218i which is, believe it or not, a 1.5-litre three-cylinder petrol. It's a brilliant thing. Revvy, fuel efficient, lots of torque. It may 'only' be the engine that goes into the MINI Cooper, but it's also the engine that powers the BMW i8 hybrid-supercar.  In here it has 140hp and returns WLTP average fuel economy of 45.6mpg.

The only other petrol engine is in the high-performance M235i. On paper doesn't look like it should fit the brief: a four-cylinder turbo engine where you'd expect a six-cylinder from something with a proper M Division badge (as opposed to just being a standard car in M Sport trim). However, the 306hp unit is brilliant. It sounds great and propels the car forward relentlessly, getting the car to 62mph in just 4.8 seconds.

Which leaves us with the diesels. They're fuel economy things and the 218d is a little on the noisy side but the BMW 20d engine remains one of the best four-cylinder diesel engines ever made. Quick, quiet…mega. It's one of the few remaining diesels you can actually recommend for more than straight fuel economy. The 150hp 218d returns 55.4mpg and the 220d 53.3mpg. 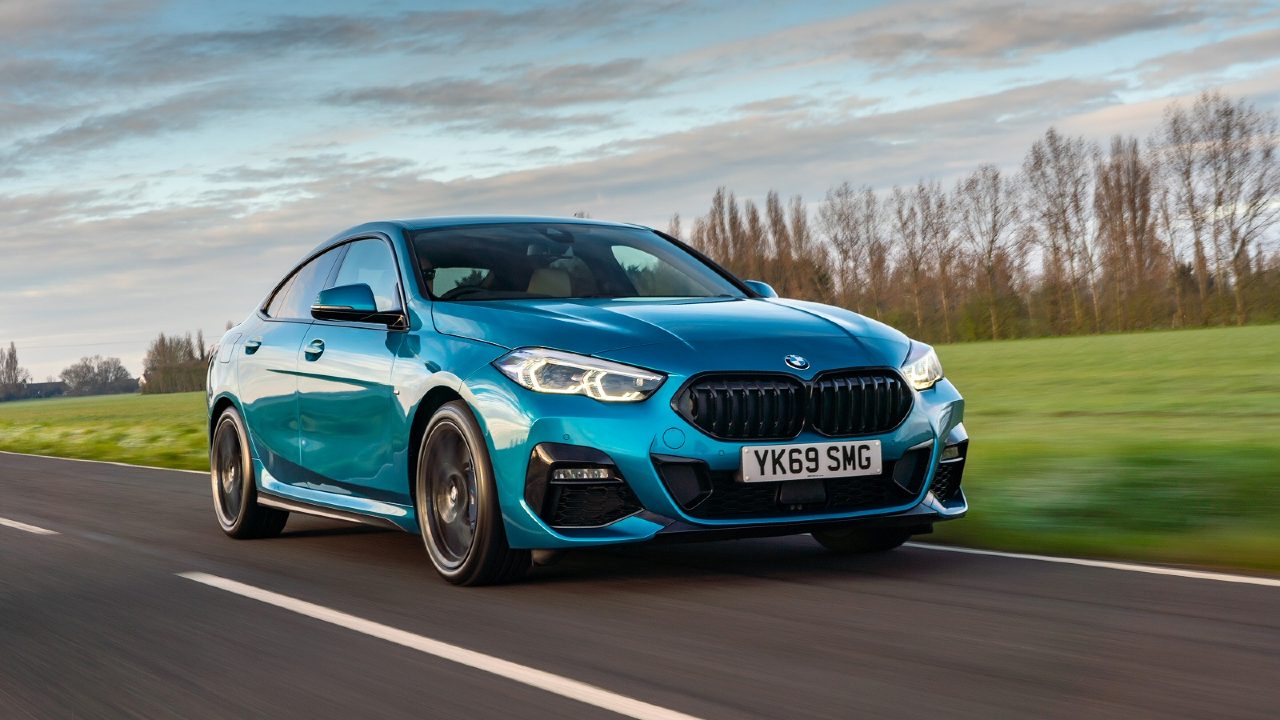 That the 2 Series GC is front-wheel drive is definitely problematic for a manufacturer that has historically been supercilious about its commitment to rear-wheel drive. And especially for a car from said manufacturer with the word "coupe" in its name – aren't coupes supposed to be the high watermark of a manufacturer's engineering output?

Not to worry though, because although the 2 Series GC does naturally suffer dynamically as a result of its layout, it's still one of the better front-wheel drive chassis on sale today. The steering is sharp, the car has plenty of grip, and it takes a deliberate sort of ham-fistedness to make it understeer. Generally it changes direction quickly and predictably. It feels like, say, 8/10ths of a proper BMW, most of the time.

It of course doesn't have that innate balance that you get with the engine driving the rear wheels, which leaves the fronts to concentrate purely on steering, but the reality is that front-wheel drive cars can five you just as much entertainment, and do so without the associated "I might accidentally go sideways" underlying dread.

One thing that is genuinely very coupe-like in the 2 Series GC is the driving position. It's low and the wheel adjustment is telescopic so you can pull it close. In the best possible way it envelops you, even though the car still feels spacious around you.

But let's be honest, it's more important that this is quiet, and comfy, and cheap to run. And in all those areas the BMW 2 Series GC excels. The fact is that the VAST majority of these will be leased in M Sport spec, with it's sportier suspension, but M Sport or not the GC is comfy, never crashy, and there's very little suspension or mechanical noise. Refinement is great. Generally, it just does not feel like it's based on BMW's smallest car (MINI aside) in any way. If feels like a proper BMW saloon.

It's very easy to recommend the BMW 2 Series Gran Coupe, despite the looks, and despite it not being a 'coupe' at all, and despite it being front-wheel drive. The Audi A3 arguably has a better cabin, and the Mercedes CLA has both a better cabin and is better looking, arguably. But there's plenty to like about the GC here – especially if you're after something that basically does what a BMW 3 Series does, but for a significantly lower price.