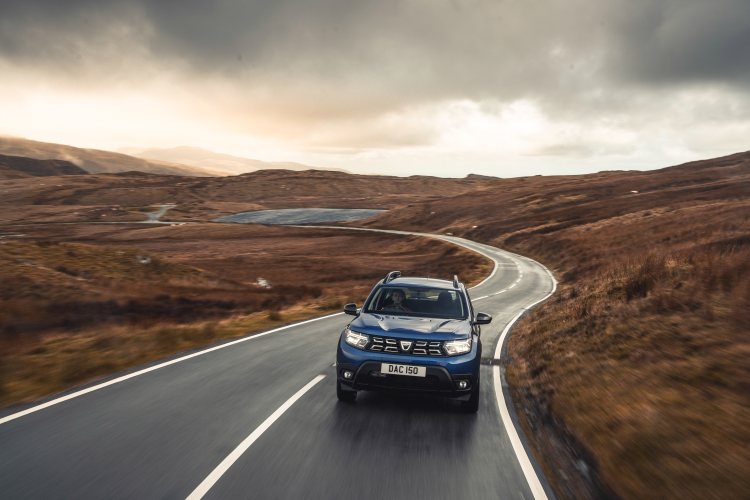 The 2nd-generation Dacia Duster, revised for the 2021 model year and beyond. Strictly speaking, it’s actually the Duster Mk3 but as we only officially got this Romanian crossover-SUV when the Mk2 arrived in 2013, then we’re calling this one our 2nd-generation.

Like any Dacia, what the Duster offers is startling value-for-money. You get a big, reasonably well-equipped vehicle here for the sort of monthly leasing costs you’d normally only find associated with city cars. Of course, there are a few compromises to be had when you shop in the bargain basement, but the Duster has steadily improved over the years to the point that we’d arguably now recommend this vehicle over almost any other similarly sized machine.

Here, we drive the 150hp model with the new dual-clutch automatic gearbox, to see if we’re still big fans of this budget brilliance. 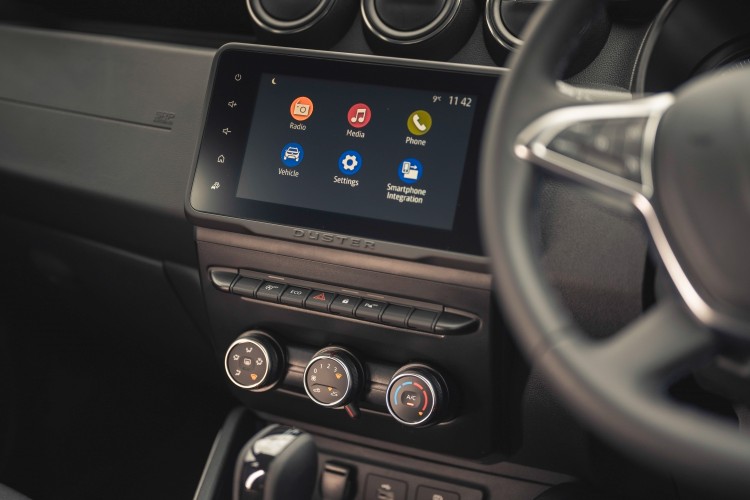 Dacia hasn’t done much to the Duster Mk2 during the facelift, but what changes it has enacted keep the crossover looking fresh. The principal detailing all revolves around a Y motif, most notably used as the signature for the headlights and daytime running LEDs, as well as for the taillamp clusters. It is repeated in the redesigned grille too, just in case you hadn’t had enough of the letter Y. Mind, Dacia is in good company here, as the only other car company we can think of which loves a Y-graphic as much as this is none other than Lamborghini.

Inside, a much-improved 8-inch infotainment system, first seen in the related Sandero Stepway, is drafted into service. It incorporates the essential Apple CarPlay and Android Auto connectivity as both Media Display and Media Nav, but the latter throws in (as the name suggests) satellite navigation as well.

Basic Dusters only have a radio system and Bluetooth, rather than the 8-inch screen, which appears at Comfort level, but very few people in the UK will actually lease a Duster Essential so the new infotainment will be the norm. The good news is this system works well, like the rest of the cabin, and there are also other details which have changed in here for the better – such as thinner front-seat head restraints, to afford passengers sitting in the rear a clearer view out of the front of the Duster. 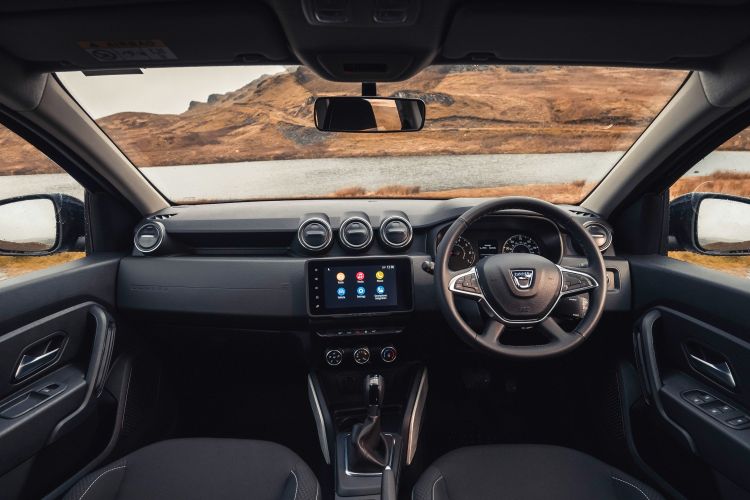 There’s a reason the Dacia Duster is so enticingly affordable and that’s because it is built very carefully to a (low) cost. So the standard of the materials used for interior finishing is going to be something of a shock to you if you’re coming to the Duster straight from a product from a more upmarket manufacturer. It’s particularly noticeable on the door cards and the dash-top, while the air vents also feel flimsy to operate, and the instrument cluster is plain and old-fashioned. But everything in the Duster works well and is laid out in an ergonomically pleasing manner, so overall a few scratchy, unyielding plastics cannot detract from what a bargain you’re bagging here. 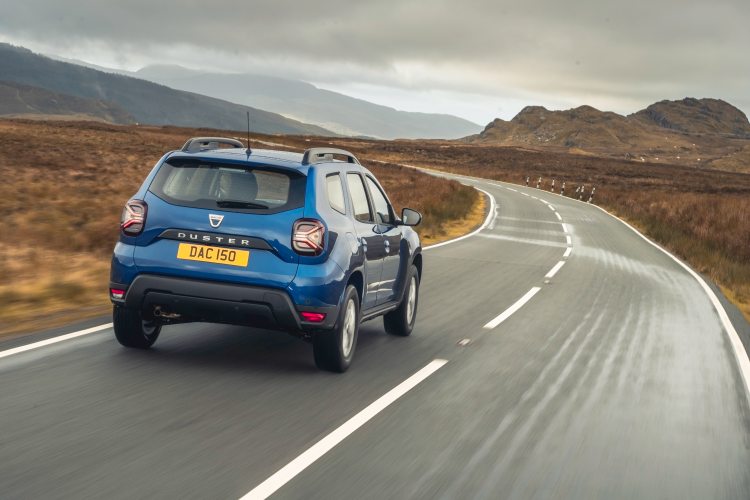 Dacia is an adjunct of the Renault-Nissan Alliance, so it uses technology and engines from that group. Powering the Duster is a range of turbocharged petrol and diesel engines that you’d therefore find in various Renault, Nissan and even Mercedes-Benz (through Merc’s agreement with the alliance) models. That includes this 1.3-litre turbocharged 4-cylinder 150 TCe engine, as tested here.

This is the most powerful unit Dacia has ever fitted to a production car, with 150hp and 250Nm, and installed in a vehicle which weighs a relatively light 1263kg, the performance is sprightly and willing, albeit not face-bendingly quick.

The new EDC dual-clutch transmission is very good, though, and Dacia must be given extra points for putting the sequential shift gate to the side of ‘D’ the correct way around – if you want to be in manual mode, knock the lever over to the left and then you pull back on the shifter to go up a gear, or push it forward to go down. So many other car companies do this the other way around, which goes against natural weight transfer during acceleration and braking phases, and it does our nut in quite frankly, so bravo to Dacia for doing things right.

Anyway, you have to shift on the lever because Dacia doesn’t equip paddles on the steering wheel. The swiftest Duster this might be, with a 0-62mph time of 9.7 seconds – being the only model to crack the 10-second barrier – and a top speed of 124mph, but it isn’t aiming to be sporty. The suspension set-up is soft and the tyres on the 16-inch alloys of our Comfort-spec model have a generous application of sidewall, so the handling is somewhat loose on the Duster TCe 150.

But it’s not poor, by any means, as the recalibrated power steering is pleasant enough to use and the body control is kept tidy no matter what provocation you throw at the Dacia. Better yet is the refinement, because the Duster has a smooth, accommodating ride quality and pretty good noise suppression in the cabin, although elevated road-roar and wind buffeting about the windscreen does hint at where Dacia has saved the development dosh. Go for a Prestige model and you get an acoustic windscreen fitted to reduce the background hubbub in the cabin of a Dacia Duster travelling at speed. 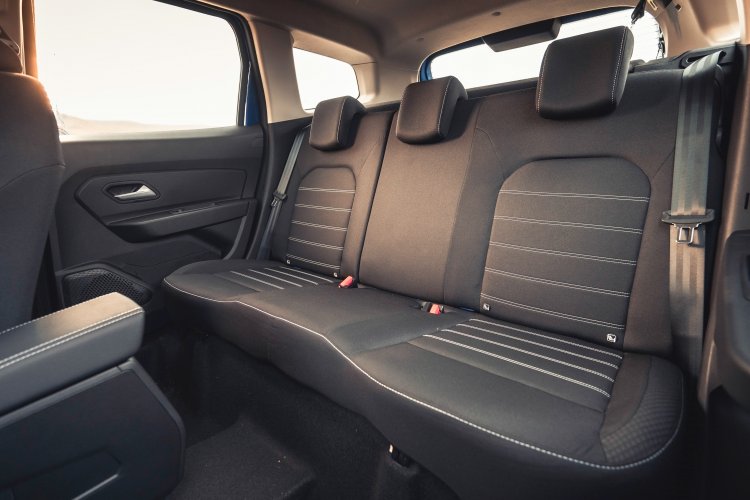 Priced like a B-segment crossover, such as parent group Renault’s own Captur, and yet physically on the larger side, what the Duster offers is a much larger crossover-SUV experience for lower leasing costs. It has a huge 478-1623-litre boot, which dwarfs pretty much anything at a comparative price point, while space in the 2nd row of seats is also bountiful. The rear bench also folds in a 60/40 split, so you can configure your load space-to-passenger requirements as you wish.

A new central armrest in the front of the Duster provides another 1.1 litres of stowage, while the door pockets are large enough that a big bottle of water or similar can be stashed within them. There are a couple of cupholders to the left of the handbrake, while another recess for a drink can be found in the open storage area just ahead of the gearlever, so practicality is fine in the Duster

If you want a 4-wheel-drive model, though, you need to have the 115 dCi turbodiesel. All the petrol models are front-wheel drive only. 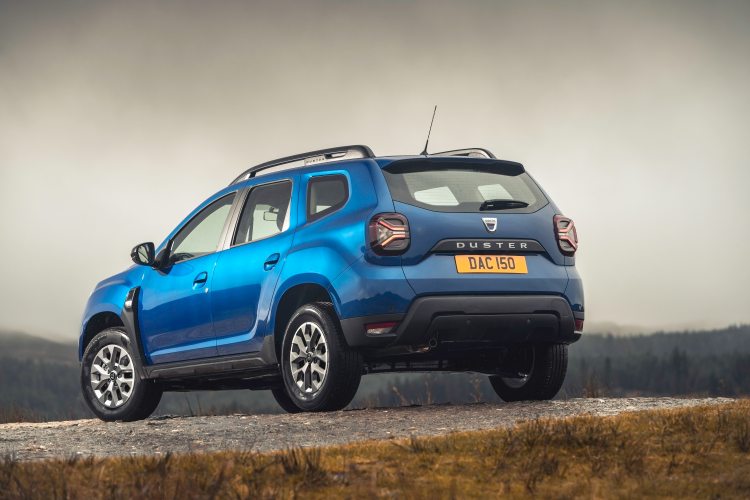 Emitting 140g/km and achieving up to 45.8mpg, the Duster TCe 150 EDC is not the most economical model in Dacia’s line-up, but it’s not going to break the bank to run. Couple that in with list prices all comfortably beneath the £20,000 barrier and you can see it’s a great new car for those on a budget – hence why we can offer you competitive leasing rates on the Duster of anything between £175 and £275pcm. All Dacias come with a 3-year, 60,000-mile warranty for comprehensive peace-of-mind cover, too.

A 3-tier trim line-up for the Duster runs Essential, Comfort and then Prestige. The Essential is very basic but incredibly inexpensive at just shy of £14,000, and it comes with 16-inch steel wheels, LED daytime running lamps, automatic headlights, black roof bars, a reach-and-rake-adjustable steering column, cruise control with a speed limiter, a 7-function onboard computer, DAB radio and also manual air conditioning.

At the top of the tree, yet only costing from £16,695, the Prestige adds in 17-inch alloys, Grey Quartz paint for the door mirrors and roof rails, rear privacy glass, an acoustic windscreen, automatic climate control, keyless entry, a multiview camera, front parking sensors, a blind-spot warning system, heated front seats, and satnav for the 8-inch Media Nav infotainment.

You can’t add much to the basic prices of these 3 levels, as Dacia only offers a £250 spare wheel and £595 metallic paint, including eye-catching Arizona Orange, as the sole options across the range. 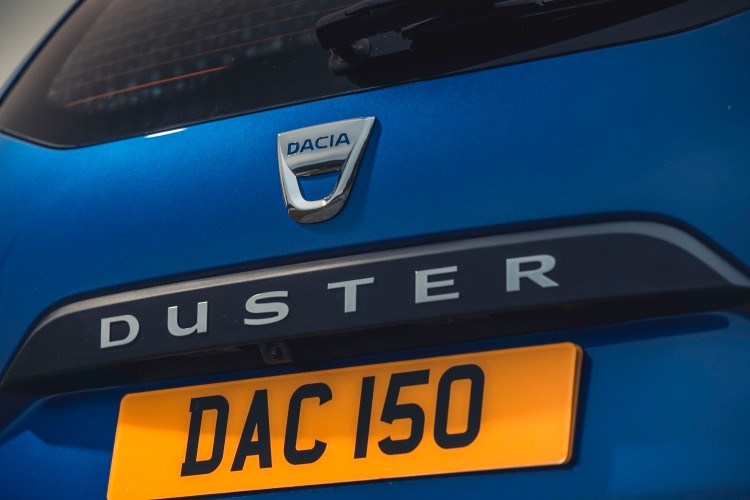 Dacia doesn’t offer any hybrid model of the Duster at the present time, instead choosing an unusual method of reducing CO2. The eco-champion of the range, then, is the 100 TCe Bifuel. This pairs the 1.0-litre, 3-cylinder turbocharged petrol engine used in the 90 TCe base drivetrain with a liquefied petroleum gas (LPG) system. A button near the steering wheel allows you to switch from petrol running to LPG, at which time the CO2 output drops by 9.5% compared to an equivalent petrol.

Dacia has increased the LPG tank’s size by 16.2 litres on the revised Duster to a total 62 litres, leaving a usable capacity of 50 litres (which matches the size of the petrol tank). The LPG reservoir is stowed under the boot floor, meaning this is the only model in the range which cannot have the £250 spare wheel option, but combined the petrol and LPG systems can deliver up to 767 miles of driving without needing refuelling. That’s pretty impressive one-shot range, whichever way you look at it.

Far more refined than the Duster, but no more spacious and is more expensive.

Stolid, straightforward crossover, although the Duster is more practical.

A similarly affordable and likeable crossover, although not quite as affordable as the Dacia.

Three things to remember about the Dacia Duster:

Has a huge cabin and boot for this class of car

More On Cars
Best Small Crossover SUVs 2021
Looking for a crossover SUV that's fun to drive? Read More
This Year’s Best And Most Popular SUVs & Crossovers
The world of SUVs and Crossovers is vast in 2022 - so here are your best options across all the different categories.Read More
Ford Puma Review
How good is the new Puma? It’s an absolute hoot to drive...Read Review