The Fiat 500 was designed to give style-conscious city car drivers a proper alternative to the MINI. And just like the modern MINI, the 500 is based on a bona fide historical classic: the original Fiat 500 ran from 1967 to 1975 and was basically Italy’s national runabout. Unsurprisingly, today's 500 has proven massively and consistently popular for Fiat since it landed in 2007.

But while the BMW-built MINI is now in its 3rd generation, the Fiat 500 remains in its first, albeit it's been improved throughout its life. If it ain't broke, why fix it? So enduring is the 500's appeal, in fact, that in 2020 when Fiat decided to release a brand-new 500, it made that one electric-only and has kept selling this petrol model alongside it. You can see how the versions compare in our 500 vs 500e article if you're not sure which might suit you. 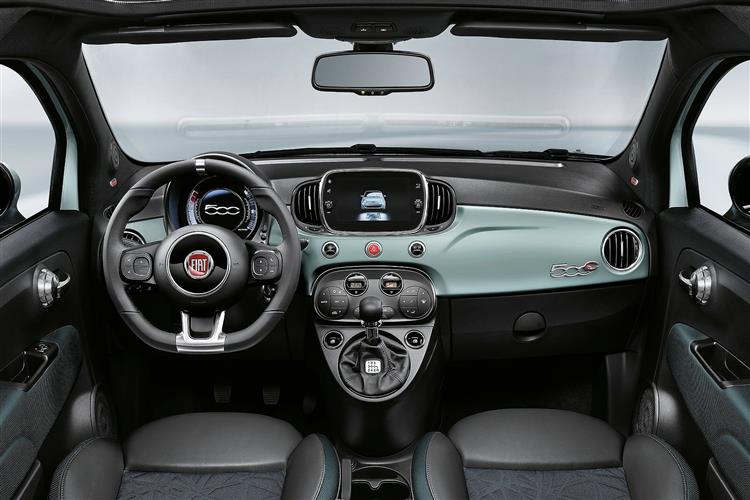 Just look at it. It's youthful and cool and fun, and its charm and sense of uniqueness remain even as the car passes 15 years on sale. That's mainly because of a fundamentally timeless design, but also because Fiat has consistently updated it, including loads of special editions, funky options and striking paint colours. Today it's available in 8 colours in various paint types (see our 500 colour guide for details) and, like the MINI, it's got customisation options aplenty.

Driving the 500 comes with a sense of old-school charm. It’s so small, so dinky, that it’s perfect for town and city driving (It's one of our top 10 city cars). Its tight turning circle, super-light steering and miniscule dimensions make it easy to park and manoeuvre, and the latest 1.0-litre 3-cylinder petrol ‘hybrid’ model - the only available engine now - is both economical and characterful. You’ll get a good 50mpg around the doors, which by any standard is great.

It probably won’t surprise you to hear that the cabin is a little cramped, given the diminutive stature of the thing, and anyone over 6ft might struggle a bit with the driving position. The seats are set high and don't lower very far, the steering wheel doesn’t have reach adjustment, and the pedals are placed really close together. The rear seats aren't especially adult-friendly either, and the boot is one of the smaller ones in the city car class.

The 500 certainly feels like a car designed for the city first and foremost, so while it shines in tight urban areas, on the motorway it's not quite as accomplished. You'll hear a lot of wind noise through the window seals and the 1.0-litre engine makes itself heard at 70mph. So if you're planning on doing a lot of motorway driving but still want something as small as possible, a VW Up, Kia Picanto or a MINI might suit you a little better. 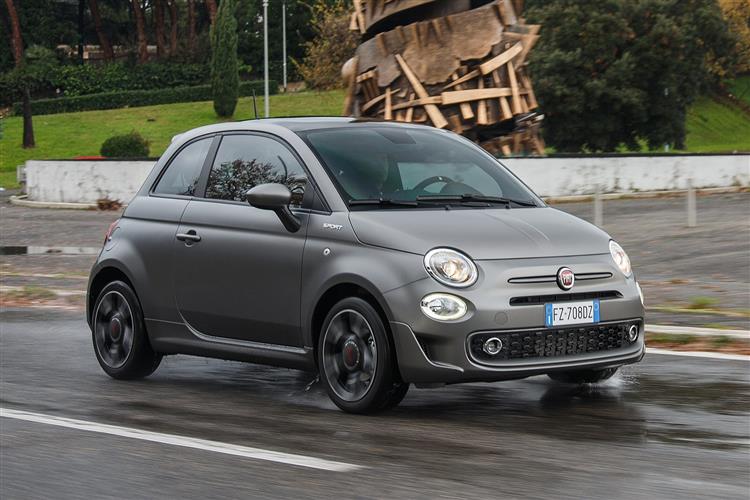 The 500 is near-perfect around town, where the ride is soft and generally comfy, and the light steering and tight turning circle make it brilliantly easy to position and park. The placement of the gearshift is quite unusual too, and a real highlight, positioned high up on the dashboard just a hand’s width from the wheel. It really helps give the 500 a compact, fun sort of feel, especially when you’re driving a little more enthusiastically. There’s a certain charm about driving the 500 more quickly, too. The corners of the car are easy to judge, it changes direction rapidly, and it has a sort of thin-tyred, slightly bouncy, 'turn-on-a-sixpence' sensation that's genuine fun. In many ways it has a quite old-school, rough-and-tumble nature.

The 1.0-litre engine, badged 'Hybrid', is excellent and really well suited to the nature of the car. It's not actually a hybrid in the way you might understand it - the car can't run on electric power alone - but rather it's a mild hybrid, which means it has a small battery and electric motor that aid fuel efficiency. Lift off the throttle and the car can coast for reasonable distances without the engine running, and the system recaptures heat energy from braking and stores it in the battery, meaning the electric motor can assist the petrol engine so that it uses less fuel to accelerate.

The 70hp engine isn't especially punchy because it doesn’t have much torque, albeit it's more than enough for such a small car. To give you some context though, it has 92Nm of torque peaking at 3500rpm, whereas a basic MINI One has 190Nm peaking at 1380rpm. However, the Fiat has enough poke for around the doors and it's a riot to thrash because it sounds great – a proper loud 3-cylinder growl. It's very economical too.

Starting prices for a Fiat 500 are under £15,000 for a base Pop-spec car, way undercutting the £23,000 starting point for a MINI One. Leasing prices start well below £200 per month with Vanarama, making this genuinely feel like a lot of style and substance for not a lot of money. Insurance costs follow suit, with the car placed in Group 9 on the 1-50 scale.

Fiat quotes 61.4mpg average fuel economy from the 500 Hybrid and in our experience that's an achievable goal, even across shorter journeys. You'll almost certainly see 50mpg+ regardless of your driving style; fuel efficiency is one of the main areas that the 500 has improved on over the years.

Fiat has pared back the trim choice with the 500 of late, offering Pop, Dolcevita and Dolcevita Plus. Pop is quite basic, including plastic wheel trims and no central touchscreen, although it does have air conditioning and still looks the part. We'd say that the £1500 premium for a Dolcevita car is well worth it though, because it includes alloy wheels, touchscreen infotainmant and parking sensors, among other things. It just feels like a lot more car from the inside. Every Fiat 500 comes with 7 airbags, stability control and anti-lock brakes, so it's a safe car.

Unlike the MINI there's no 5-door version of the 500 and the boot, at 185 litres, is on the small side even compared to other city cars - albeit it's not far from the 211-litre boot of a 3-door MINI. Still, the rear bench splits in half and folds down, so there is some flexibility in the cabin - you'll produce a 500-litre space with both parts of the bench folded down. There's a little bit of oddment storage for the driver and passenger, but again, this is not a city car you buy with practicality in mind. If you want that, you might actually want to consider the Toyota Aygo X, an unusual urban vehicle with an SUV-inspired body.

There's a convertible version of the 500 too, called the 500C, which takes a unique approach to the genre. Instead of having a complex (and heavy) folding mechanism, the 500C has a fabric roof that slides all the way back and concertinas over the boot, leaving the car's body structure intact. It reduces complexity, weight and cost, and it also means that, unlike other convertibles, virtually no boot space is lost as compared to the standaed model.

Hugely popular and for good reason, the MINI is still the benchmark for handling and city-car ergonomics.

One of the most popular small hatchbacks around, see how the Corsa compares to the 500 in our dedicated article.

Driving the 500 comes with a sense of old-school charm. Its dinky dimensions make it perfect for town driving, and it still looks and feels as cool as ever.

3 Things To Remember About The Fiat 500:

Fiat 500 Electric Colour Guide - Which Should You Choose?
Here’s a detailed look at the paint palette available on the Fiat 500 4-seater city electric vehicle (EV), which we hope will help you choose your perfect new car colour. Read Guide
Fiat 500 Vs Vauxhall Corsa
Looking for a small car but can't choose between the Fiat 500 and Vauxhall Corsa? We put the two head-to-head...Read More
Fiat 500e Electric Vs. Fiat 500
We compare the brand new battery electric 500e with the petrol-electric Hybrid version of the older 500.Read More