Nothing makes quite the same style statement as a smartly turned-out saloon. Whether you're after something compact or larger & more luxurious, your choices are wide & varied. Here are a few choices that should suit everyone. 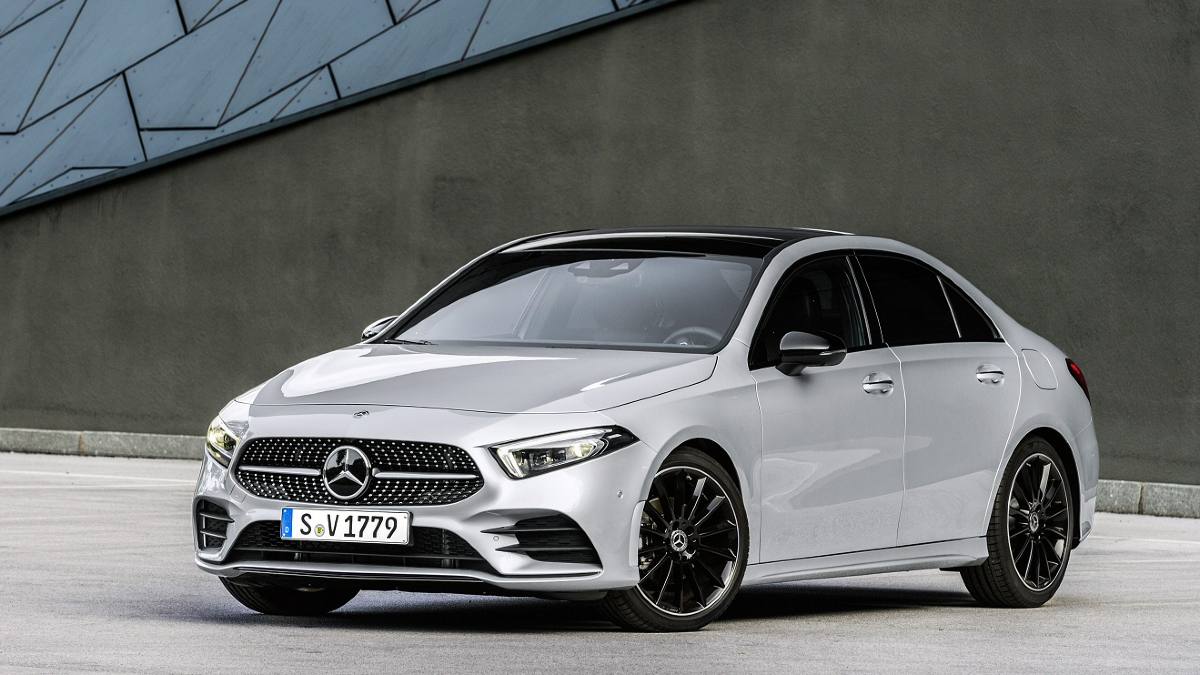 With this 4th-generation A-Class, Mercedes offers a saloon variant for the first time. It's 130mm longer than the hatch version, but sits on the same wheelbase & features a modular 2-part rear bumper, along with a "muscular sensual shoulder line", according to Mercedes-Benz. That extra dose of visual appeal is important because this variant is up against 2 stylish rivals, the BMW 2 Series Gran Coupe & the Audi A3 saloon. Advantages of this 4-door A-Class variant include greater headspace on the rear seat, wider opening rear doors for easy access & a 420-litre boot that's 50-litres bigger than the hatch, though the tailgate does have a narrower opening.

Inside, you get the sophisticated twin-screen dashboard technology that characterises all of Mercedes' current compact models. A wide range of engines are offered, but if you're on a budget you'll need the base A 180 & A 200 petrol variants. These use a 1.3-litre four-cylinder petrol power plant putting out either 136hp (A180) or 163hp (A200), an engine paired with 7G-DCT 7-speed automatic transmission. 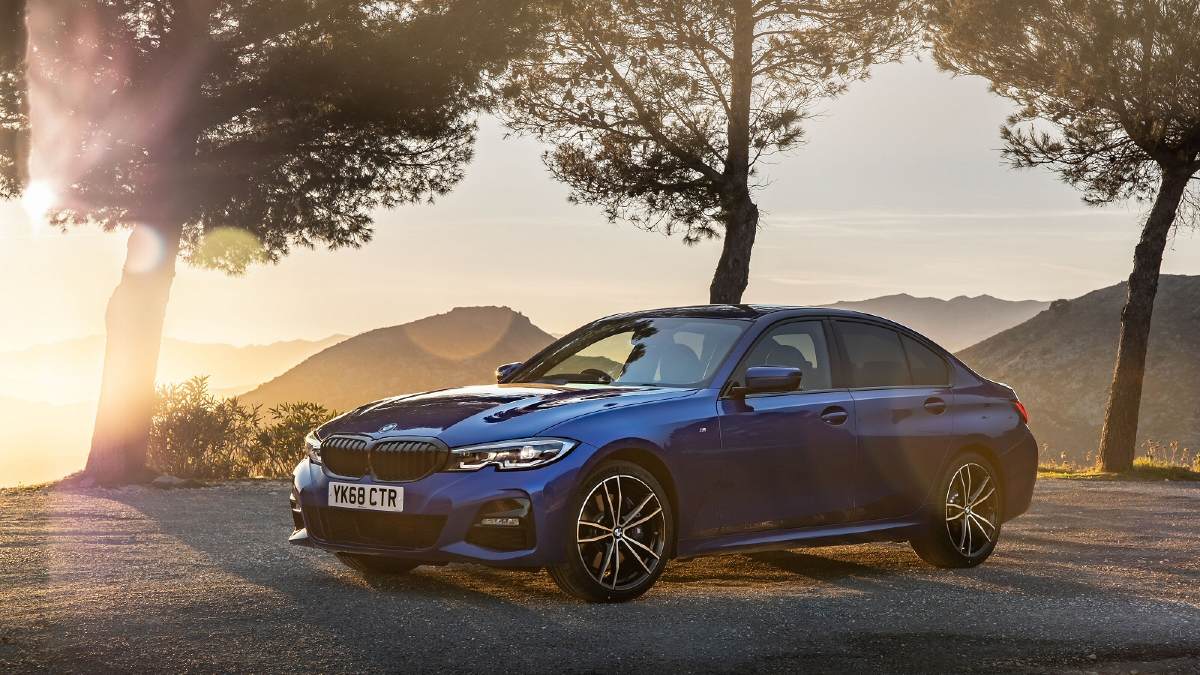 The 3 series saloon is BMW's iconic mid-sized executive contender & this 7th generation version redefines what this model line should be. A clever new suspension system with 'lift-related' damping means that the luxury ride this car needs to deliver need not compromise the quest for the sharpest possible levels of handling. There are more responsive engines too, the strong selling diesels boosted by a switch from twin-scroll turbos to sequential twin-turbocharging that delivers extra mid-range engine punch. The boast is that you can have your cake & eat it because all the power plants on offer are from the brand's latest 'Efficient Dynamics' family & claim to offer class-leading cleanliness & frugality. That's something further aided by sleek aerodynamics & the lighter weight of the new CLAR platform that this contender borrows from BMW's larger models.

The driver-centric cockpit is now of far higher quality than before & gets infotainment with BMW's latest "Hey BMW" voice control system. Two adults can sit comfortably in the back & there's a 480-litre boot. As usual with a BMW 3 Series, there's a rear wheel drive layout, though increasingly 3 Series buyers like to choose to have their cars fitted out with xDrive 4WD. There's a wide range of four-cylinder engines from the brand's Efficient Dynamics family in a line-up that starts with the 320i, which offers 184hp from its 2.0-litre turbo unit. The same engine also features in the 330e petrol plug-in hybrid model. This same 2.0-litre petrol engine is also available in 258hp form in the 330i. If you need 6-cylinder petrol power, you'll need the 374hp engine of the rare M340i.

Many 3 Series Touring buyers still want a diesel & the black pump-fuelled range starts with the 318d (which has 150hp) before progressing up to the 320d (which has 190hp). You can find an affordable 320d M Sport auto model in our 'Offers' section. Flagship of the diesel line-up is the 330d xDrive, which offers 265hp.

This is the 5th 'A6'-badged model to be offered by Audi in our market & its balanced proportions are smart & contemporary, with much borrowed from this car's A8 saloon & A7 Sportback stablemates. That means tight surfaces, sharply defined edges, striking lines & short overhangs. This 'C8'-series Audi A6 design we're looking at here was introduced in mid-2018 & is, as you would expect, a much more modern interpretation of the breed.

In terms of the practical stuff, this A6 Avant offers a 530-litre boot, which can be extended with the split-rear backrest retracted. In our 'Offers' section, you'll find a very affordable deal on a 40 TDI S line S tronic variant featuring the optional 'Tech Pack'. 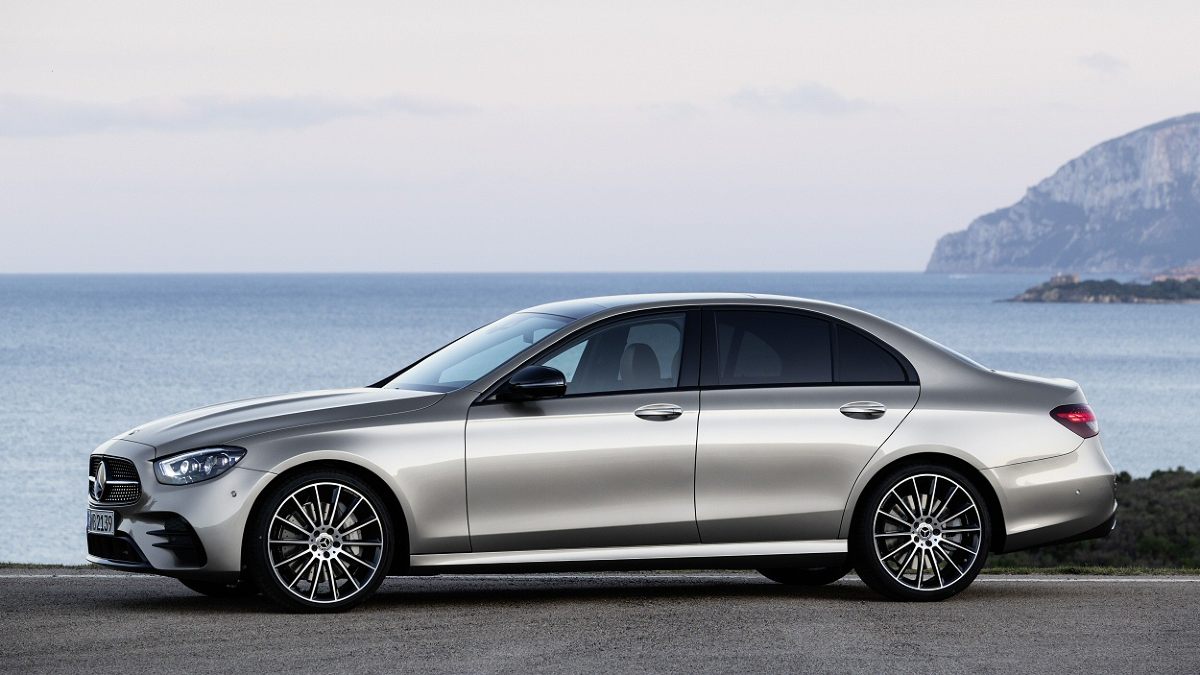 The looks & appearance of any car are subjective, but it's hard to argue that this improved version of the tenth generationE-Class saloon isn't a very good looking machine. It now has a sportier, more confident demeanour & a more graceful sense of style borrowed from the larger S-Class model. Recent changes include reshaped LED headlamps & a revised grille. As before, the elongated bonnet is coupled with a coupe-style roof that flows into a powerfully-extended silhouette characterised by short overhangs, a long wheelbase, large wheels & taut well-defined flanks.

Take a seat up-front & you'll find the interior dominated by a couple of 10.25-inch screens, one for the instruments & the other for the infotainment features. These displays can be upgraded to 12.3-inches in size at additional cost & either way, they work with the latest MBUX interface, which means you can use the sophisticated "Hey Mercedes" voice control system. Out back, rear space is very generous & the saloon model can offer 540-litres of luggage capacity, along with folding rear seatbacks to extend that if necessary.

Electrification has been introduced into this revised MK10 model, with the option of plug-in hybrid technology on both diesel & petrol engines & Mercedes' EQ Boost mild hybrid tech. In the main part of the line-up, the petrol engines range in output from 154bhp to 362bhp, while the diesels vary between 158bhp to 326bhp. In our 'Offers' section you'll find a very affordable deal on a base petrol E 200 AMG Line Edition version. 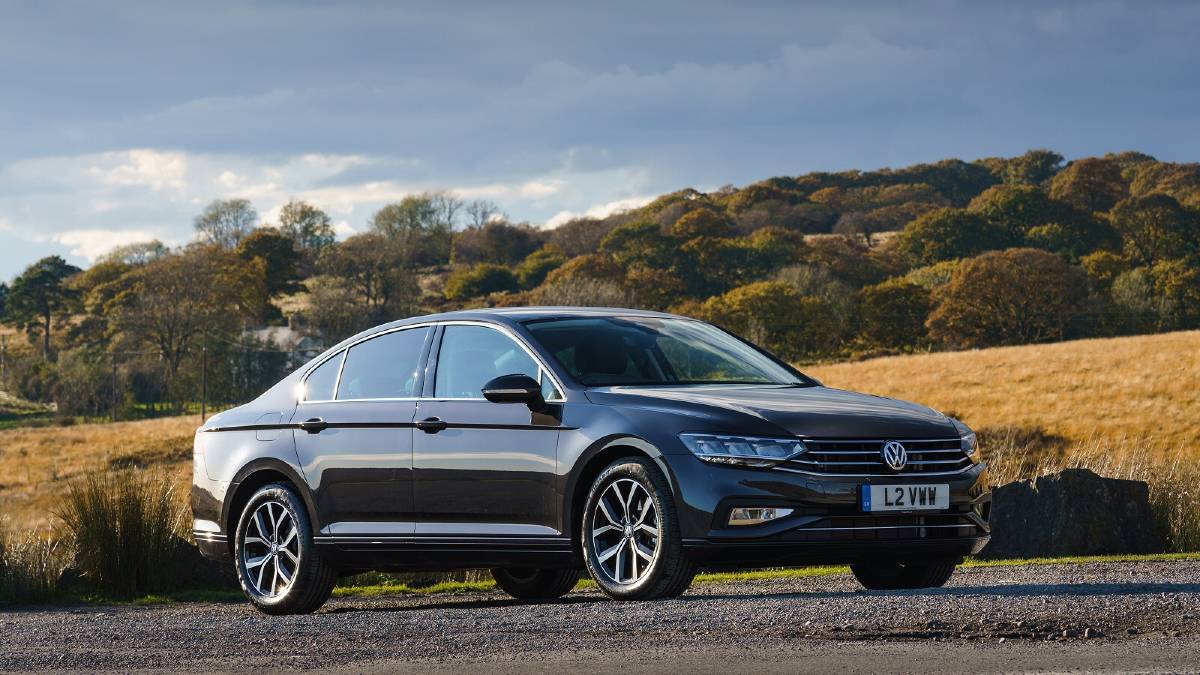 You know where you are with a Volkswagen Passat. While other manufacturers have been persuaded that saloons of this kind should be able to drive on their door handles, Volkswagen knows what its customer base really needs: a car that will lower the heartbeat, rather than raise it. As with any company that really knows its market, the rewards have been considerable. Today, like every day, over 3,000 new Passats will be sold across the world, with a new owner taking delivery every 29 seconds, making this the company's best selling global model.

This is the 8th generation model, which proved to be shorter & lower than its predecessor, & it's been usefully revised in more recent times with minor styling revisions & updated engines. Up front, there's a classy feel, with a large central 8-inch infotainment screen & a set of optional digital 'virtual' dials. In terms of practicality, it's hard to imagine how you'd be disappointed. Two adults can stretch out in the back & the boot is big, measuring in at 586-litres & of course it's extendable if you fold the split rear backrest.

This updated model gets engine changes – the key one is a new version of the volume 150 PS diesel engine that the majority Passat saloon buyers choose, which is now badged the 2.0 TDI EVO 150PS stop & is these days significantly cleaner, featuring active cylinder shut down extra efficiency. There's also a less-powerful 120PS 1.6 TDI diesel variant – which you'll currently find available in SE L form in our 'Offers' section. 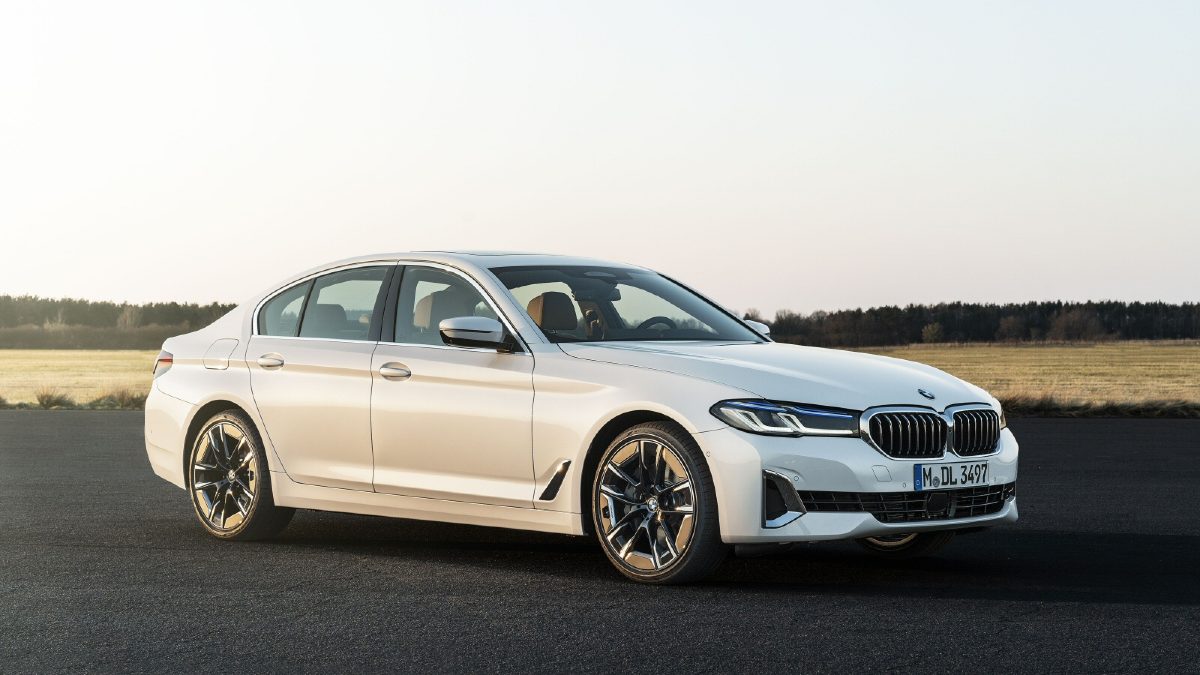 BMW's 5 series has always been the driver's choice in the full-Executive class but in the past, other rivals have delivered a little more polish. The brand is now out to change that with this revised model, which looks sharper thanks to slightly slimmer headlights & a sleeker LED tail lamp design. Some key changes have taken place beneath the bonnet, where virtually all 4 & 6 cylinder variants now get the brand's 48V mild hybrid electrification set-up. There's also an extra plug-in hybrid version to sell alongside the existing 530e, this one badged 545e & available only as a four wheel-drive saloon. if you can't quite stretch to very fastest four-door derivative, the top M5, there's now a variant of this car that's almost as good, the M550i xDrive saloon, which offers 528bhp & 750Nm of torque from a 4.4-litre twin turbo V8.

Up front, the infotainment system now features the latest "Hey BMW" voice technology & the instrument cluster is largely digitally based. As you'd expect in this class, there's plenty of room for two adults in the back & you get a large 530-litre boot. The 530e plug-in model mentioned earlier is particularly affordable in our 'Offers' section currently, available there with dynamic looking M Sport trim.

For more motoring news, check out our car blog and, while you're here – why not browse our car leasing deals or latest Saloon offers.

Best Cars For MPG
Its all of the best cars for Mile Per Gallon...Read More
Best New Cars Of 2021
With 2020 well behind us, let's look ahead to the best new cars hitting the road in 2021Read More
The Ultimate Guide To Estate Cars
Looking for a car offering superb practicality? Here's our pick of the best estates available.Read More
We use cookies to improve your experience. Find out more in our cookie policy.