Why Lease the Mercedes-Benz Gla Class? 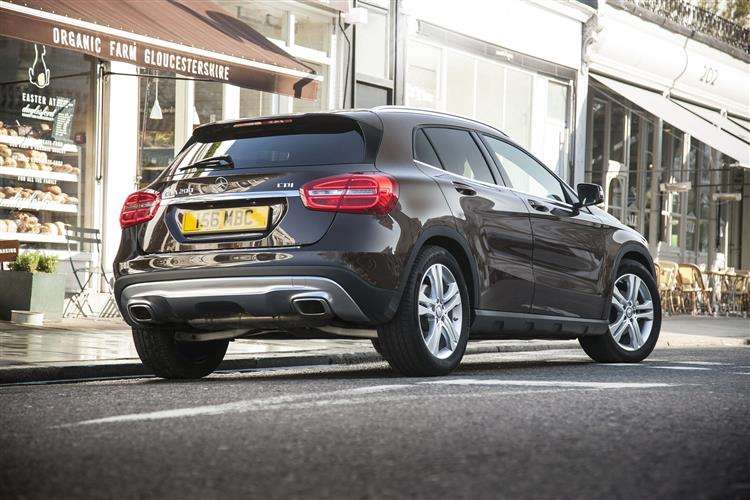 The GLA is the entry point to Mercedes' SUV range, a compact Crossover now lightly updated to take on strengthened competition in this important segment. Jonathan Crouch takes a look at what's on offer.

Imagine a Mercedes A-Class hatch with a little extra practicality and a more adventurous outlook and you'll have this car in mind, the brand's GLA compact Crossover. It's the brand's answer to more premium offerings in this growing fashion-conscious segment and has been engineered with the kind of thoroughness you'd expect from the Three-Pointed Star. Let's check out this model in lightly revised form.

Mercedes calls this the enry point into its SUV line-up but in fact, the GLA isn't really any kind of proper SUV. Instead, it targets customers who like the idea of a Qashqai-class family-sized Crossover but want it with a slightly more prestigious badge. The car was launched in 2013 and specifically targets BMW's X1 and, even more directly, Audi's Q3. Under the skin, it's almost idenical to a Mercedes A-Class compact hatch, yet boasts the rugged-ised looks and slightly higher ride height that Crossover buyers like so much. With competition strengthening in this sector, Mercedes has boosted the GLA's appeal with minor exterior styling changes that include the availability of full-LED headlights. And embellishments to the cabin that offer a classier feel. More significantly, an offroad 'comfort' suspension package that raises the car by 30mm comes as standard.

A car that essentially is a family hatchback is likely to have the dynamic aptitude of a family hatchback. A model that, in contrast, is designed as a proper RAV4 or CR-V-style compact SUV is never going to feel as sharp, no matter how compromised its Rubicon Trail pretensions might be. So if you like your driving, you'll give thanks that this GLA isn't setting out to rival RAVs - or indeed Audi Q5s, BMW X3s or Range Rover Evoques come to that. Mercedes has designed a C-Class-based GLC model to do that. That frees this car to be a proper Qashqai-class compact Crossover. Or, to put it another way, to offer pretty much all the handling brio you'd get from the A-Class hatch it's designed upon, with pretty much none of the downsides, these being mainly centred on an over-firmed ride here replaced by something much more supple. When it comes to drive traction and transmission, much will depend on engine choice. The cheapest GLA 180 derivative uses a 122bhp 1.6-litre petrol engine, but most will want this unit in the uprated 156hp state of tune you get with the GLA 200. Both variants offer the choice of auto or manual transmission. Should you wish for more performance than that, you might find yourself ending up in the only 4WD GLA, the GLA 250 4MATIC auto-only 2.0-litre derivative at the top of the range. With 211 braked horses to call upon, this flagship version has a useful extra turn of speed, dispatching the 62mph benchmark in 6.6 en route to 143mph, despite having the carry around the extra weight of 4WD hardwear that can send up to 50% of the engine's power to the rear wheels for improved cornering exit traction. There are now no diesel options.

Though Mercedes sees this GLA as part of its SUV portfolio, there's nothing very SUV about the way it looks. It's probably better to simply see this as an A-Class with an added dose of attitude, a role much closer to its comfort zone thanks to a raked-back windscreen and a front end that sports big air intakes, neat flutes in the bonnet and smart smeared-back headlights. Changes made to this revised model include modified bumpers, smarter alloy wheels and the option of full-LED headlights. As before, smart GLA-specific touches include the way the stylists have teased out the wheel arches, adding muscularity to the look. And the sleek integration of the standard aluminium roof rails. Drop inside and you'll find a cabin that in this revised model has been upgraded with higher quality seat coverings, smarter trim and chromed control panels, plus there are re-styled instrument dials. Otherwise, it's as you were, which means that, depending on the suspension chosen, you can find yourself sitting up to 80mm higher than you would in a comparable A-Class model. That means quite a commanding view out-front from a driving position easily perfected by wide adjustment possibilities for seat and steering wheel aided by plentiful head and shoulder room. The cabin architecture of all Mercedes' smaller models is pretty much identical these days, which fortunately is no bad thing in terms of what you end up with here. So, as with any A or CLA-Class model, you get the same deeply-cowled twin-dial instrument binnacle viewed through a lovely, grippy nappa leather-trimmed three-spoke multi-function steering wheel. There are the same five chrome-trimmed SLS supercar-style air vents decorating a dash split into upper and lower sections. The upper part's dominated by the iPad-style 5.8-inch free-standing infotainment screen that's been stuck in the middle of it, controlled by a little rotary dial positioned where the handbrake would normally be if it hadn't been replaced by one of those fiddly electronic ones with a switch hidden away beneath the fascia. Out back, you get 481-litres of luggage space, a big jump up from the 341-litre total offered by the A-Class and around 60-litres more than you'd get in an Audi Q3.

Mainstream GLA buyers looking at the 1.6-litre petrol models will need a budget in the £25,000 to £30,000 bracket. Dedicated followers of the brand though, can consider paying up to around £35,000 for the GLA 250 4MATIC flagship 2.0-litre version. That sounds reasonable given that the extra cash gets you quite a lot of extra performance. Running costs do also rise quite significantly with this pricier model though, so make sure you've taken that into account. If, having considered all of that, you conclude that it is a GLA model you really want, then you're going to need to know what's included in the asking price. And the answer is a very reasonable spec. Even in least expensive SE trim, you get 18-inch alloy wheels, aluminium roof rails, privacy glass, a chrome-trimmed twin-pipe exhaust, rain-sensing wipers and a reversing camera. Inside, there's man-made Artico leather for the seats and the real nappa stuff trimming the multi-function steering wheel, plus air conditioning, a trip computer and a DAB radio with Bluetooth, USB and Apple iPod connections. Standard safety stuff includes 'ATTENTION ASSIST' and 'Active Brake Assist' autonomous braking.

Mercedes has worked extremely hard to make this GLA one of the cheapest cars to run in its class, efforts aided by the fact that all the engines on offer feature direct injection and turbocharging, plus an ECO start/stop system that cuts the engine when you don't need it, stuck in traffic or waiting at the lights. There's also an ECO setting for the 7G-DCT 7-speed automatic gearbox, a slippery 0.29 Cd drag factor, plus intelligent management of engine ancillaries like the alternator, the oil feed and the water pump and low rolling resistance tyres. As a result, it's hard to argue with the numbers generated by this GLA, figures that aren't very different from those of its Mercedes A-Class design stablemate, despite this car's extra 40kg of weight. Fuel economy from the petrol engines is difficult to better in the class and the WLTP CO2 returns are good too. The base manual GLA 180 manages 158g/km of CO2 in manual form with 18-inch wheels - or 144g/km in this guise as an automatic. For a GLA 200, the equivalent figures are 151 and 147g/km. For the auto-only GLA 250, it's 169g/km.

'Freedom', Mercedes says, 'is contagious'. Desire for compact Crossover models of this kind certainly is - even if they cost as much as this one. It doesn't directly compete with RAV4 or CR-V-style SUVs but, given that it costs the same sort of money, I can see a number of people who'd previously have simply settled for another such CR-V-style soft roader being tempted by what's on offer here. Some cheaper Crossover models of this kind seem a little crude in comparison with this GLA. Like them, it's essentially a family hatchback in a pair of hiking boots, but its transformation to meet that need has here been completed with a silken thoroughness typical of the Three-Pointed Star. That doesn't extend to any really serious off road capability but then, for many buyers, such a thing is neither wanted nor needed. Appropriate then, for this car to be so visually subtle in its expeditionary pretensions. True, similar claims are being made in this segment by the BMW X1 and Audi Q3 rivals this car is being directly pitched against. But these are cars with slightly higher running costs and asking prices that are no cheaper. You can see then, why Mercedes is confident this GLA will prevail against them. It's arguably the best compact car the brand makes. And that makes it very significant indeed.