Why Lease the Subaru Brz? 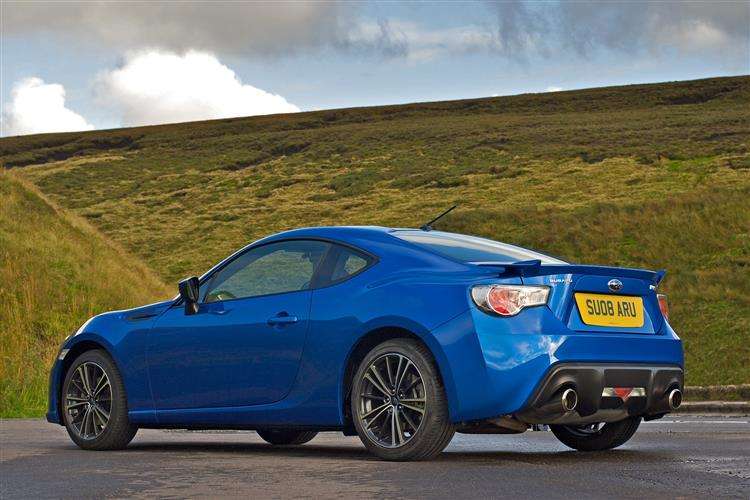 Subaru's BRZ sportscar gets a smarter look, more sophisticated inotainment and sharper handling. What's not to like? Jonathan Crouch checks out the changes.

The BRZ has proved to be a Subaru like no other before it, produced as part of a joint project with Toyota to breathe new life into an affordable rear-wheel drive coupe market that was once so vibrant. This car doesn't need to be concussively quick, for the real joy in driving it comes through the tactility of its controls and the purity of its handling. Now it's been usefully updated.

Subaru has made its name amongst performance enthusiasts with rally replicas like the Impreza WRX. Yet the BRZ sports coupe we're looking at here is about as far away from a rally replica as you're ever likely to get, its engineers proudly trumpeting the absence of 4WD, turbocharging and sophisticated electronics, ironically the very things this Japanese brand has promoted to performance people for so many years. It came about as part of a joint project with Toyota who wanted a return to the affordable sportscar market but didn't have the production or the development capacity for it. Subaru provided both, creating what they see as a sportscar in the classic sense - rear wheel drive with a front-engined layout, a low centre of gravity and a high-revving engine. Having perfected the recipe, Toyota supplied the exterior design and production began at a purpose-built plant, both of this BRZ and its near-identical Toyota counterpart, the GT86. That car has a much higher market profile but a strong after-sales package means that this one might just be a better real world choice. Either way, fast fireworks seem guaranteed. Let's check out this revised version.

Apparently, the BRZ's name tells you everything you need to know about this car. 'B' stands for 'Boxer engine', 'R' for 'Rear wheel drive' and 'Z' for 'Zenith' - the ultimate in affordable thrills. Is that what this is? From an early glance at the stats, you might wonder. There's nothing especially startling here, the 2.0-litre flat-four engine producing 197bhp and 205Nm of torque, enough to get you to sixty from rest in 7.6s on the way to a top speed of 143mph. Plenty of comparably priced hot hatches can match or beat that. But none of them can deliver the driving experience on offer from this Subaru. It's a normally aspirated, front-engined, rear-wheel drive coupe. Let's start with that. For a keen driver, the recipe doesn't get much purer. Plumb in a boxer engine that helps it to a centre of gravity lower than a Ferrari 458, add a proper mechanical limited slip differential and offer a six-speed manual gearbox with three beautifully spaced aluminium-plated pedals in the footwell and you have what most would agree is a very good start. Even from this point it would have been easy to get things wrong. But Subaru didn't. On the contrary, the BRZ is so right in so many ways it's almost as if the hand of Porsche has worked upon it. There's a simplicity to its controls, a delicacy and tactility to the steering and the pedals that offer the keen driver so much. Improvements for this revised version include refinements to the engine and drivetrain, plus redesigned dampers that reduce body roll and a new 'TRACK' driving mode for circuit use.

For us, there's something just that little bit more appealing about the looks of this BRZ in comparison to its Toyota GT86 stablemate - and I can't quite work out why, for apart from a slightly different front grille, the aesthetics of the two cars are exactly the same. More important though, is the stuff you can't see. One of the fundamentals in the design of the BRZ was to keep weight down and, thanks to fastidious attention to engineering detail, this car manages to tip the scales at a mere 1220kg - that's less than something like a tiny Renaultsport Clio 200 hatch. We should talk about the changes made to this revised model. The Coupe shape remains, but has been enhanced with a wider, lower stance at the front end. This isn't just for show, as the 45?? stepped accent on the bumper limits airflow into the air intake, which improves handling and ride. The BRZ's face is finished off with full-LED headlights, a Subaru first. New design rear lamps and aerodynamic pedestal spoiler top off the rear of the car, and the wheels are now a 10 spoke aluminium design. Inside, a 4.2-inch colour LCD multi-information display has been added into the instrument panel. The display features a G force meter, steering angle gauge, brake force gauge, lap timer and torque/power curves for bringing out the sportier side of any driver. The steering wheel has also been redesigned into a smaller package with different leather to increase the driver's grip for a more engaging experience and is finished off with audio control switches. Focus has been directed to upgrading the feel of components by using higher quality materials throughout the cabin, including Alcantara and leather seats. As before, this is a 2+2 coupe, so trhe rear seats are tiny, but there's a usefully-sized 243-litre boot, extendable to 1,270-litres.

As before, you'll need a budget of around £26,000-£28,000 for this car and, also as before, it's priced slightly below its more familiar Toyota GT86 design stablemate. There's only one trim level - 'SE Lux' - and buyers get the £1,500 option of a paddleshift auto gearbox. The upgraded cabin quality means you'll feel a lttle mre comfortable about paying that kind of money this time round. In return, you'll be getting an enthusiast's tool that nothing else in the sector bar its Toyota sister car can match. To find another sports coupe that can deliver such rich feedback and flow so beautifully through the bends, you'd have to turn to the kind of Porsche Cayman that the Japanese engineers apparently used as a development benchmark - at nearly double the price. You also get plenty of equipment included in the deal, most of what you'd want in fact, so check off features like lovely leather and alcantara trim for the heated sports seats, smart silver and black-finished 17-inch alloy wheels, auto headlamps with pop-up washers, front foglamps, power-folding mirrors, the torque-sensing limited slip different, a six-speaker CD stereo with USB compatibility and an aux-in point, dual-zone climate control, a leather-trimmed steering wheel and gear knob, aluminium pedals, cruise control and Hill Start Assist on manual models to stop you rolling backwards on uphill junctions.

The light weight doesn't only help the performance. It also, of course, makes a big difference to your running costs. Subaru quotes a combined cycle fuel figure of 36.2mpg, a return that at first glance is a little behind obvious coupe segment rivals. But virtually all of these are turbocharged, a configuration that in the real world tends towards much thirstier figures. This BRZ in contrast, should easily return over 30mpg on a regular basis, even if you enjoy yourself in it - which means that you'll get a decent operating range from the 50-litre fuel tank. That's about as much as you can ask of a car like this. The CO2 return isn't quite so impressive at 180g/km for the manual model. If BMW can make a 252bhp 4 Series coupe emit less, Subaru ought to be doing better on this score. It's worth pointing out though that, a little surprisingly, the emissions figure improves to 164g/km if you opt for the 6-speed automatic model (which manages 39.8mpg on the combined cycle). All of which is of course identical to the efficiency you'll get from this same design badged as a Toyota GT86.

Let's be clear about this: the Subaru BRZ remains a very special car. Better indeed than any true World Rally Blue Subaru optimist could hope to expect. It has a beautiful simplicity that speaks of paring back to the essence of driving purity, including just enough of what you need and nothing that you don't. Like its Toyota GT86 design stablemate, this is a hero car for our times, one that rewards the properly talented driver without making the less proficient feel clumsy or unworthy. Of course, you've to pay for your pleasures. The cabin could still feel more luxurious, the engine could be cleaner and more refined and the whole package needs to be thrashed before it'll give of its best. But correcting these things would add weight and dilute the very essence of this car, so instead, Subaru has focused on the things that really matter. The result is a car you'll enjoy very much.