Why Lease the Subaru Forester? 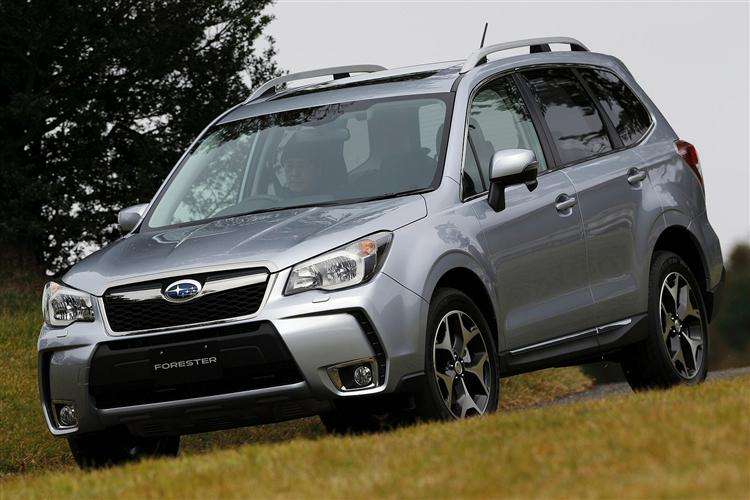 The Subaru Forester's clever diesel 2.0D engine, along with the current generation model's larger body, puts the car in a better position than ever before to snag sales from traditional Freelander and RAV4-sized smallish 4x4s, all well as to continue to serve those family buyers who need occasional extra traction and are in search of something just that little bit different.

This Japanese brand took its time in developing a diesel engine but the end result was worth the wait, particularly for customers of the Forester, the marque's rather interesting cross between all-wheel drive estate and compact 4x4. It seems astonishing that the car managed to campaign quite successfully on the UK market for over ten years without one, but that tells you a lot about the loyal following this model has attracted since its launch here in 1997. Here, we're looking at an improved version of the third generation model, which takes on Freelander-sized small SUVs and 4x4 estates like Skoda's Octavia Scout. It looks decent value too, which should appeal to the more pragmatic buyers who are going to be particularly attracted by this 2.0D version.

This Forester diesel has a number of class-leading qualities but one of them isn't the 145PS output of its boxer engine which struggles a little more with this weightier model than it does when installed in the company's more tarmac-orientated Legacy range. Still, the rest to sixty sprint is dispatched in a quite acceptable 10.6 seconds on the way to a top speed of 114mph, which is quite as fast as most will want to go. Usefully, the extra engine torque over the petrol model allows a full 2,000 kg braked towing limit. The class-leading bits are the emissions (155g/km), fuel economy (47.9mpg on the combined cycle) and range (in Europe, you'll be able to go around 1,000kms between fill-ups). Refinement is another huge strength: when this engine was fitted in the Legacy, Subaru claimed a lower official moving sound level than a Rolls-Royce Phantom. That's down to the engine's unique configuration. Traditionally, diesels have been either traditional upright straight or V-configured units. Subaru has founded its reputation of the low centre of gravity afforded by a horizontally-opposed, or boxer, engine where the cylinders lay flat on their sides, the pistons travelling towards each other like the fists of two pugilists. Manufacturing a diesel engine in this guise has taken some effort but the travails have been worth it.

Tweaks to this improved third generation Forester aren't very great, amounting to little more than a smarter chrome finish on the front grille and more compact wing mirrors. Inside, a revised instrument binnacle and a re-designed steering wheel try to lift things a bit but the overall effect here is still anything but sophisticated, with the emphasis on hard-wearing durability rather than slush-moulded style. Probably, that's as it should be, for it all feels in keeping with this Subaru's rugged remit and certainly seems to have been built to last. And anyway, there are compensations. The seats are brilliantly comfortable and visibility around and about from the huge glasshouse is exceptional. In the back, there's far more legroom than you'll find on comparable small SUVs, though as usual in this class of car, three adults will feel rather squashed, though they can at least recline the backrest for greater comfort on longer journeys. The boot meanwhile, offers 450-litres of space, extendable to 1,610-litres should you decide to flatten the 60/40 split-folding rear bench. Plus the front passenger seat can also be flattened if that proves not to be enough. This car is also better suited than most of its rivals to the carriage of heavier loads thanks to the standard fitment of self-levelling suspension.

Forester diesel customers pay a premium of around £1,700 more than the comparable 2.0-litre 150bhp petrol engine but they do get a choice of three trim levels - X, XC and XS. Apart from the expected symmetrical all-wheel drive system, all versions get Subaru Vehicle Dynamics Control, self-levelling rear suspension, fuel-saving electric power steering and 16" alloy wheels. You can also expect to find all-round electric windows, 60/40-split rear seats with reclining back-rests, climate-control air-conditioning, a decent CD stereo, front fog lamps, a vehicle information display, a leather-covered height and reach-adjustment steering wheel, heated front seats, mirrors and windscreen wipers plus cruise-control. In the XC, you get bigger alloys, a better stereo and a full-length sunroof, while the pricey XS adds leather seats and satellite navigation. Much of the engineering and equipment on the Forester positions it as one of the more advanced vehicles in its class. Safety is particularly important for family buyers and the Forester excels in impact absorption for both the vehicle occupants and pedestrians. The front seats get seatbelts with pretensioners and load limiters, the brake pedal is collapsible, all pillars feature impact absorbent materials and there are front, side and curtain airbags.

Perhaps it's this car's slightly rough and ready character. Or the fact that I expected to have to pay a little extra for greater capability. Whichever, I came to Forester motoring expecting that its running costs would be a little higher than those of Freelander/RAV4 or CR-V-style competitors. Actually, quite the reverse is true. The figures for this 2.0-litre diesel variant are almost unbeaten in this segment, thanks to a relatively light kerb weight and the most recent engine changes which, for example, have improved fuel economy by over 7%, leading to a 47.9mpg combined cycle figure in the entry-level diesel variant. As a result, this car can claim the longest operating range of any car of this kind, the larger 64-litre fuel tank fitted to this improved MK3 model offering the opportunity to go as far as 1,000kms (or around 625 miles) between fuel stops. At the same time, this Euro5-compatible powerplant is also cleaner than you might expect, with a DPF Diesel Particulate Filter and a 155g/km CO2 figure. There's also the peace of mind of Subaru's industry-leading ETCo (Everything Taken Care of) package, an after-sales scheme like no other, including benefits worth up to £7,000.

Without this diesel engine, the Forester would have remained, at best, a bit player in the compact 4x4 sector. Thus equipped however, it suddenly becomes an intriguing left-field choice amongst those not planning anything too arduous on the rough stuff and looking for something that won't look too embarrassing when you pass the green protesters with their placards at the school gate. Its refinement is a particular strength, showing up some diesel 4x4 rivals for the unacceptably loud rumblers that they actually are. And class-leadership in terms of running costs? In a Subaru? It'll take a little time to get used to that one. Taking time to get this unit right has been one of the benefits of the Forester's tardy appearance at this particular party.