Why Lease the Audi A4 Allroad? 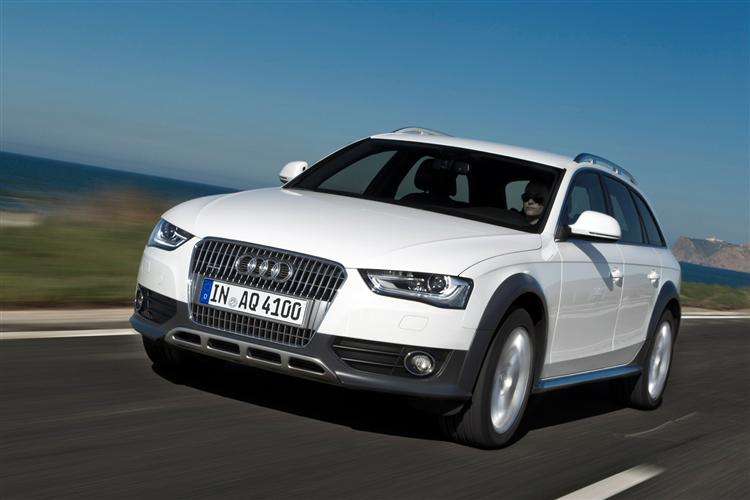 The fifth generation Audi A4 offers potent performance in S4 guise. As with all previous versions, this is a saloon (or estate) that doesn't shout about its speed, despite it being faster than ever. The experts at Car and Driving check it out.

With the continued popularity of diesels, you might wonder what the point of Audi's S4 is. After all, who wants a thirsty petrol V6 when the V6 diesel has 272PS? Still, economy is better than ever, while the S4 is now capable of 0-62mph in less than 5 seconds. That's reason enough for us.

The S4 has been a fixture in Audi's range since 1991 and has largely followed the same formula. Sure, engine-wise, it might have been offered with (in order of appearance) a turbocharged in-line five, a V8, a twin turbo V6, another V8 and a supercharged V6, but all have been mounted up front with power sent to all four wheels. All have also been available as a saloon or Avant (estate) guise too. The main thing that all S4 models have shared is discreetness. Unlike some rivals, this Audi has never shouted about the level of performance it offers. There might be extra exhaust pipes, subtle badging and some attractive alloy wheels but Audi have always avoided bulging arches, vents and in your face body kits - there's the RS4 for that. And so we come to this current generation model, a car that returns to the turbocharged V6 format but offers more power than ever. How does it stack up to its predecessors?

While it may seem like Audi have simply replaced the supercharger of the previous model's V6 with a turbo, the 3.0 TFSI unit is in fact all new. The lightweight motor churns out 354PS, 10PS more than the throbbing 4.2-litre V8 that was once fitted to the S4. Being turbocharged, there's plenty of torque this time round too; 500Nm to be precise. While you might expect this to be coupled to one of Audi's dual-clutch semi-automatic gearboxes, there is in fact an eight speed Tiptronic unit. Despite this older style of gearbox, a reduction in weight helps this become the fastest S4 ever. 0-62mph is dispatched in an exceedingly rapid 4.7 seconds, while the top speed is limited to 155mph as you would expect. Unlike some of its older brothers, this latest S4 should prove to be fun when the road gets twisty too. Under normal conditions, the centre differential channels 60% of the engine's torque rearwards. This can be as much as 85% or as little as 30% should slippage be detected. Handling prowess can be further enhanced with an optional sports rear differential that can actively shuffle torque between the rear wheels as well.

Like the regular A4, the S4 is based on Audi's latest 'MLB' platform that uses a combination of high strength steels and aluminium to reduce weight. This is down to 1,630kg for a standard S4 saloon, despite the car being marginally longer and wider, if not taller. Indeed, the S4 has sports suspension that makes it 23mm closer to the ground than a normal A4. To look at this model externally, you'd be hard pushed to know how potent the S4 is. There are the now traditional aluminium-look mirror housings, four exhaust tips, a subtle lip on the boot lid, plus S4 specific front and rear bumpers. Unlike the exterior which is very much an evolution of the previous generation of S4, the interior is a lot more avant garde. There's a flat bottomed S4 badged steering wheel, matt brushed aluminium inlays for various trim pieces and predominantly black fabrics and trim everywhere else. There are 'S' sports seats in Nappa leather and Alcantara that not only hold the driver tighter than a regular seat, they also have a massage function too. There is of course plenty of room for five passengers inside, while the 480-litre boot (505-litre in the Avant) should take a fair amount of luggage too.

You'll need a £46,000 budget for your S4. That prices the car in direct competition with the BMW 340i. If that's an agreeable figure, the first question you need to ask yourself is whether you prefer your Teutonic express as either a saloon or estate. While the saloon may be a little lighter, if you're going for subtle speed, an estate seems the obvious choice. For your money, you get S sport suspension, 18" wheels, S-specific styling cues inside and out including model specific bumpers, plus leather and Alcantara sports seats inside. As with any Audi, it's all too easy to bump the price up by a five figure sum if you option stuff like the 19" wheels, sports rear differential, head up display and the Audi virtual cockpit. At least you shouldn't have to pay out for additional safety features. On top of everything we've come to expect, there's adaptive cruise control with traffic jam assist so the car almost drives itself up to 40mph. For when you are in full control, there's park assist, a cross traffic warning, plus autonomous braking.

Especially when compared to the old 4.2-litre V8 variants, this turbocharged V6 S4 may not be as expensive to run as you may expect. Yes, the V6 diesel is cheaper still and we're not even going to bring the four cylinder models into the equation, but the S4 isn't much worse than some hot hatches. Combined fuel consumption is 38.2mpg, with carbon emissions at 170g/km. Naturally, those figures will get significantly worse if you start to explore the performance on offer. Something else to be wary of is loading the car full of options. Big petrol engines aren't great for resale in this country anyway, so don't make things worse by ticking loads of boxes on the spec sheet. While it might seem worthwhile at the time, it's unlikely the next buyer will pay extra for a lot of the equipment unless it's the sport differential or maybe the adaptive damping. The warranty is for three years or 60,000 miles. However, this can be extended for a fee.

The Audi S4 has always been the grown-up choice for people after a performance saloon; the choice for those not wishing to scream about what their car can do. While it may not be capable of big, smoky drifts, it'll be fast point-to-point no matter what the road surface is like or what the weather is doing. That will appeal to many people out there. The trouble is that there is competition from within the A4 range. With the most powerful diesel churning out 272PS yet still capable of 54.3mpg on the combined cycle, you really have to want the fastest non-RS version of the A4 - or just hate diesel. The fuel consumption is about the only concern we'd have though. As a sensible yet quick and capable transport for five people, the S4 is tough to beat.