Why Lease the Audi A6 Allroad? 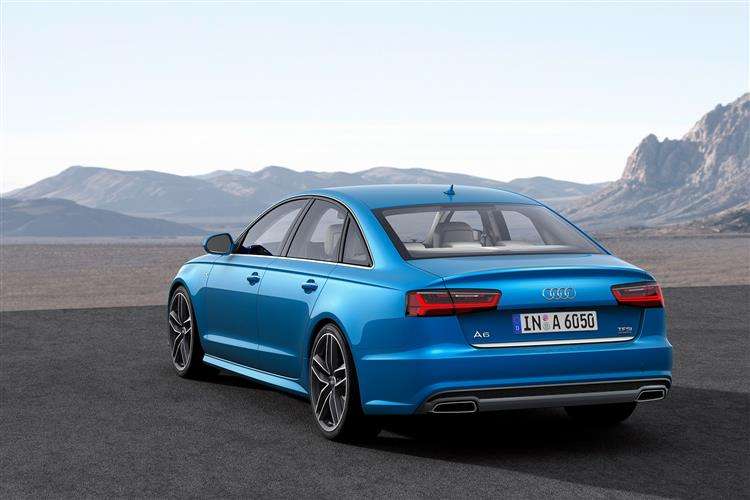 This MK5 model Audi A6 trims up and sets about its rivals with a package that's based on a efficiency, technology and, yes, a bit more power. It'll have its work cut out dislodging BMW and Mercedes but it's hard not to love the care and attention that's clearly been lavished on this car.

'A first class journey with a business class ticket': that's how Audi describes the travelling experience you'll get in this fifth generation A6 model. Basically, what the Ingolstadt brand has done here is to democratise much of the technology of its larger A8 and enveloped it into smartly proportioned new bodywork. There's certainly lots to admire here, with advanced mild hybrid drivetrains, sharper yet more comfortable suspension options, sublime cabin comfort and a high-tech all-digital MMI touch response interface. But then then exceptional technology will be needed if his Audi is to be able to face down rivals of the quality of BMW's 5 Series and the Mercedes E-Class.

Engine-wise, things kick off with the 204PS 2.0-litre TDI diesel engine in the '40 TDI' variants, offered with either front wheel drive or quattro 4WD. For six cylinder buyers, Audi offers this A6 with two powerful, smooth engines - one TFSI and one TDI. The 3.0 TFSI V6 turbocharged petrol unit powers the saloon from rest to 62mph in 5.1 seconds using its 340PS and 500Nm of pulling power, topping out at an electronically limited 155mph. More popular though, will be the 3.0 TDI diesel with 286PS. This unit delivers similar performance thanks to 620Nm of pulling power. As before, all A6 models are exclusively equipped with automatic transmission. The 3.0 TDI unit is paired with an eight-speed tiptronic and the 3.0 TFSI with a seven-speed S tronic. Both engines channel their outputs through quattro all-wheel drive as standard. In conjunction with the tiptronic transmission, the quattro configuration is based on the more familiar self-locking centre differential format, while the S tronic transmission works with the even more efficient ultra variant, which is capable of engaging the rear axle instantly whenever needed but decouples it during cruising to maximise efficiency. In conjunction with the tiptronic transmission, the optional sport differential can enhance handling by actively distributing the power between the rear wheels. The driver can select various driving profiles via the Audi drive select system - the wide spread from Comfort through to Dynamic is even more pronounced than in the outgoing model.

The styling of this fifth generation model borrows much from its A7 Sportback and A8 executive and luxury segment stablemates. So there are taut surfaces, sharp edges and striking lines, plus a long bonnet, a long wheelbase and short overhangs. The wide, low-slung Singleframe grille, the flat headlights and the powerfully contoured air inlets lend a suitably purposeful air. In profile, three striking lines reduce the car's visual height. The powerfully taut contours, which are drawn over the wheels, are testimony to Audi's quattro genes. This shape is certainly very sleek: thanks to advanced aerodynamics, a class-leadingly-slippery drag coefficient of as little as 0.24Cd has been achieved. The interior is larger than the outgoing model. Legroom in the rear exceeds not only that predecessor design but also the space you'll get in core competitors, while headroom and shoulder room measurements in both front and rear are also more generous than previously. Up front, the dash features the black-panel design we first saw on the current A8. As there, the centre console is directed towards the driver, as is the top MMI touch response display, which almost disappears into an aluminium clip when switched off.

Eprices start at around £39,000, which gets you the 2.0 TDI diesel '40 TDI' saloon; there's a £2,100 premium if you want the Avant estate bodystyle. As before, this car's three key rivals will be the Mercedes E-Class, the BMW 5 Series and the Jaguar XF. You'll need to get your A6's spec right. There are four suspension set-ups: the conventional steel spring suspension, the sport suspension, the suspension with damper control and the adaptive air suspension, also with controlled damping. 'Progressive steering', which becomes even quicker and more direct as the steering angle increases, is standard. And dynamic all-wheel steering can also be added to further enhance this agility. Plus you can add in various autonomous driving features. And even specify Audi's 'parking pilot' and 'garage pilot' systems that will allow you to stand outside of your A6 and remotely park it: brilliant. A sophisticated MMI navigation system comes as standard - or you can add the optional 'MMI navigation plus' set-up. This has a media hub with high speed data transfer using the LTE Advanced standard. With this more advanced infotainment package, you can further add optional modules, including two sound systems headed by the Bang & Olufsen Advanced Sound System delivering 3D sound. Audi connect online services also provide clever 'car-to-X services' traffic sign and hazard information. They use the swarm intelligence from the Audi fleet and network the Audi A6 with its environment.

All engines in this fifth generation new A6 feature the brand's latest mild-hybrid technology. Here a belt alternator starter (BAS) works together with a lithium-ion battery, enabling the A6 to coast at speeds of between 34mph and 99mph in the interest of fuel economy and to initiate its start-stop function earlier - at speeds of 13mph and below. The engine is restarted from standstill predictively as soon as the vehicle in front starts moving. During deceleration, the BAS recovers up to 12 kW of energy. Let's get to the figures. The volume 2.0-litre 40 TDI diesel saloon version manages 62.8mpg on the combined cycle and 117g/km of CO2. The 3.0 TFSI petrol unit delivers combined fuel economy of between 39.7mpg and 42.1mpg (depending on wheel size and trim choice) and CO2 emissions of between 161g/km and 151g/km). The 3.0 TDI delivers combined fuel economy of between 48.7mpg and 51.3mpg, plus combined CO2 emissions of between 150g/km and 142g/km. We'll finish by covering the warranty. All cars in this class get three years of cover, but whereas BMW and Mercedes don't limit your mileage in this period, Audi rather meanly restricts you to 60,000 miles. Optional extra-cost packages can extend the cover to either four or five years.

Has Audi done enough with the fifth generation version of this car? Many thousands of managers who'll put many more thousands of miles under the wheels of their new A6s every month will feel so. As before, they'll value this car for its quiet, understated professionalism, further marvelling in this guise at its mind-boggling technology and rather wonderful cabin. Yes, there are perhaps more characterful cars than this smart, efficient and perfectly mannered business conveyance - perhaps even some that feel sharper at the wheel. But it's hard to think of a more complete or cost-effective choice in this sector. It's all very vorsprung durch tecknik. And at the end of a very long day, you're likely to feel that that's what really matters.