Being rich and famous has many benefits, one of which is that everything you touch immediately becomes much more valuable. Costumes, memorabilia and even vehicles once owned by celebs often fetch huge sums when resold.

So, how much value do celebrities really add to a car? We've uncovered the most eye-opening examples in recent years of motors that have gone up in price by simply having been driven (or even just sat in) by a famous person.

To calculate this, we looked at the average resale value of the same model of vehicle that the celebrity was selling, in the same year of their sale, for a direct comparison of prices – finding the percentage difference between a standard motor and a celeb's car.

The most valuable vehicle in terms of added cost belonged to the 44th President of the United States, Barack Obama, with his 2002 Grand Jeep Cherokee hitting the auction block in 2019 for £38,440. That's a staggering 1,207% more than the average resale value the same year - £2,940.

That's not to say Donald Trump didn't bring in the big bucks for his 2007 Ferrari F430 Coupe, with a 151% price bump courtesy of his name being attached. 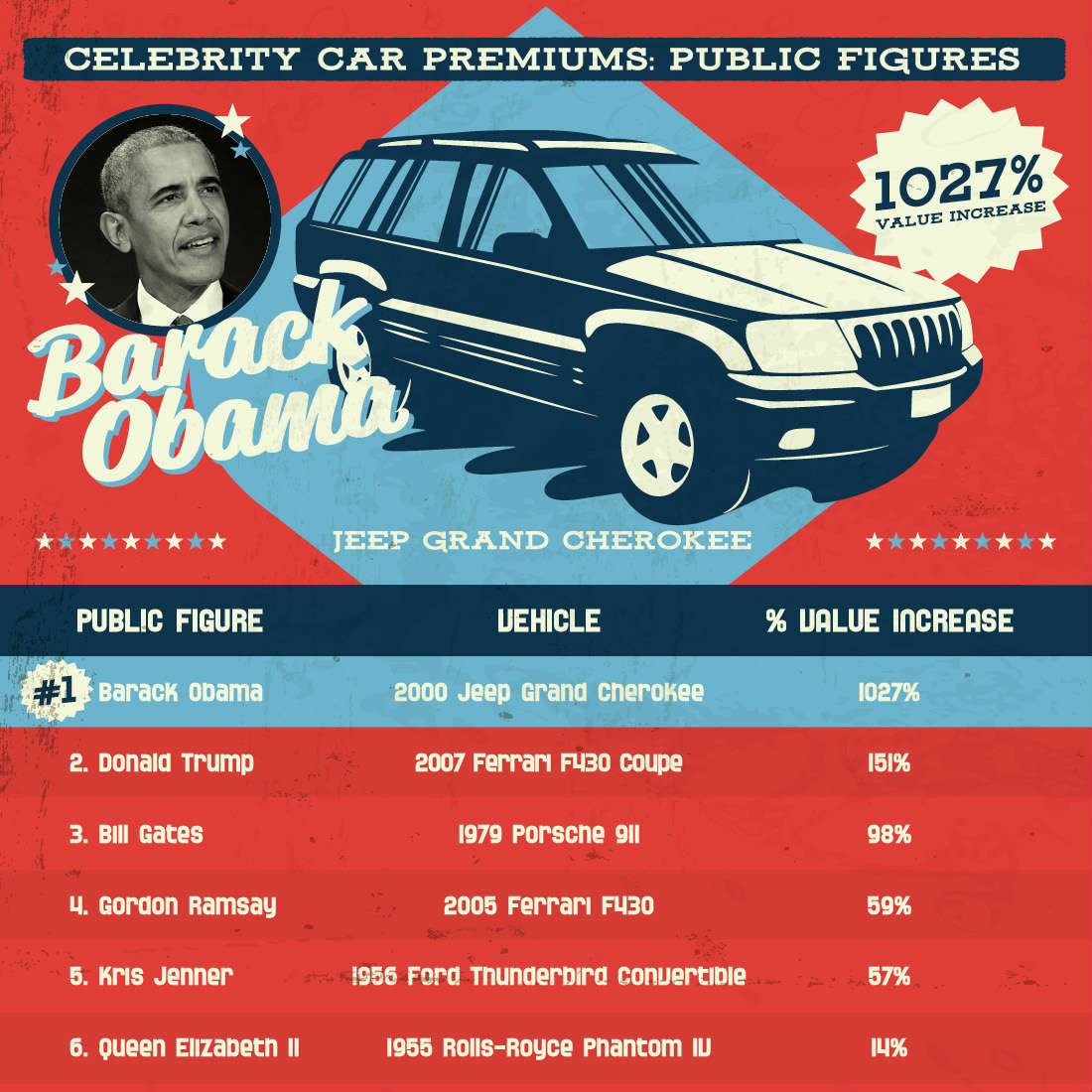 Other cars from notable public figures included Bill Gates, whose Porsche 911 brought in a laudable £30,490 over market value (a 98% bump) and star chef Gordan Ramsay's Ferrari F340 which netted an increase of 59% (£45,430) over the same models sold in 2019 without a gourmet connection.

We also found that, in these crazy times, reality TV royalty added more value than the actual Queen of England. The fact that a Ford Thunderbird Convertible had previously been owned by Kris Jenner of Kardashians fame made it 57% more valuable while the Queen's Rolls Royce Phantom IV only managed to add 14% over market rate.

Fab Four Feud: Ringo Increased His Motor's Worth By More Than McCartney

While he may be the one on the receiving end of most Beatles-related jokes, Ringo Starr proved that his ability to bring in the big bucks is no laughing matter. Ringo's 1966 Mini Cooper S brought in 355% more than comparable models the year it sold while Paul McCartney's gained a respectable 86%. Not bad for Macca but it doesn't quite have that Starr quality.

Sat between the Beatles is Justin Bieber who sold a Ferrari 458 Italia he claimed to have 'forgotten that he owned', back in 2017. Despite his blasé attitude to fancy motors, he still managed to add 162% in value for simply being associated with it. 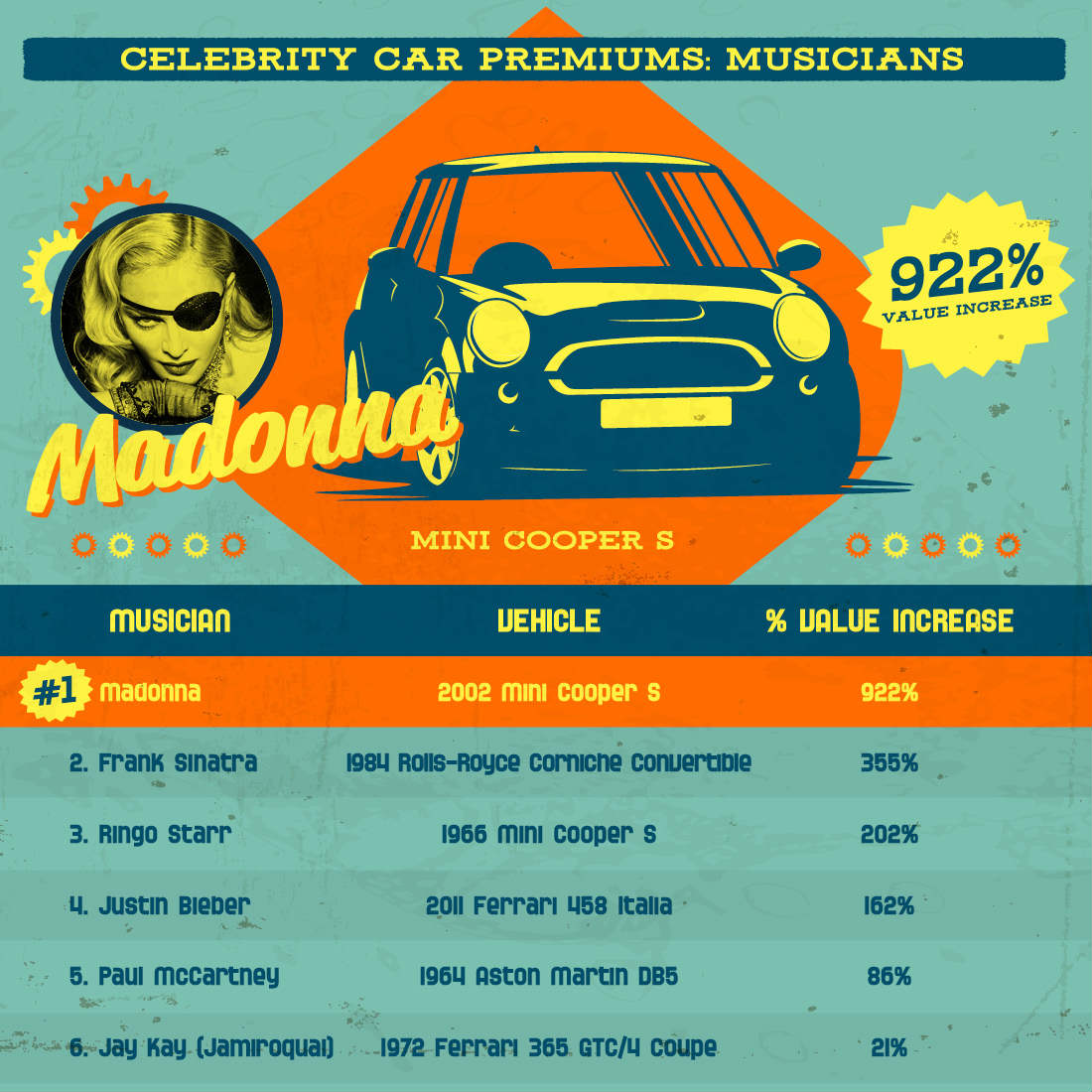 Other notable musicians that made the cut in our leaderboard include Frank Sinatra in the second spot for adding over 355% to the value to his Rolls-Royce Corniche and Jay Kay of Jamiroquai whose 1975 Ferrari GTC/4 sold for 21% over odds.

Battle Of The Steves: McQueen Takes The Lead While Coogan Stalls

While it's a given that cars appearing in films will attract a hefty price tag, what about the cars driven offscreen by the actors themselves? It turns out that their star power carries over in the form of a larger resale payday. Top of the pack is King of Cool, Steve McQueen, whose Chevvy Pick-up sold for 227% more than those sold in the same year by people who didn't have Hollywood cachet. 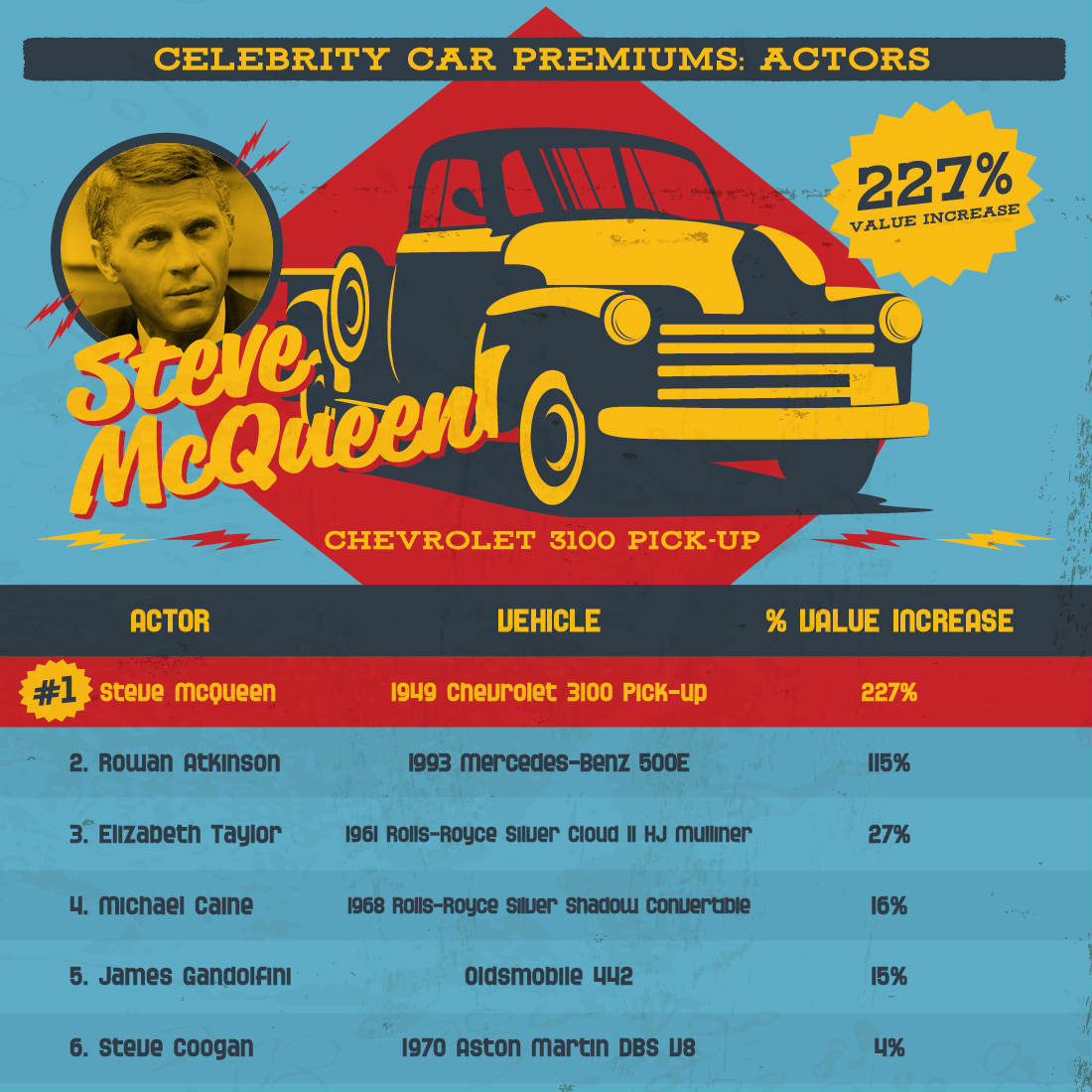 Other screen legends in the list were Elizabeth Taylor and Michael Caine whose Rolls-Royces sold for a celeb premium of 27% and 16% respectively.

We also found that the Oldsmobile 442 belonging to James Gandolfini, Tony Soprano himself, sold for a 15% upwards of the model's average pricing in 2017.

Sports Star Showdown: Beckham Scores While It All Ends In Tears for Ronaldo

From pro footballers to WWE superstars, we’ve also uncovered which sportspeople added the most value to their vehicle. The late Diego Maradona, regarded as one of the greatest players in the history of the sport, 1992 Porsche 911 brought in over £370k more than the average resale in March 2021. 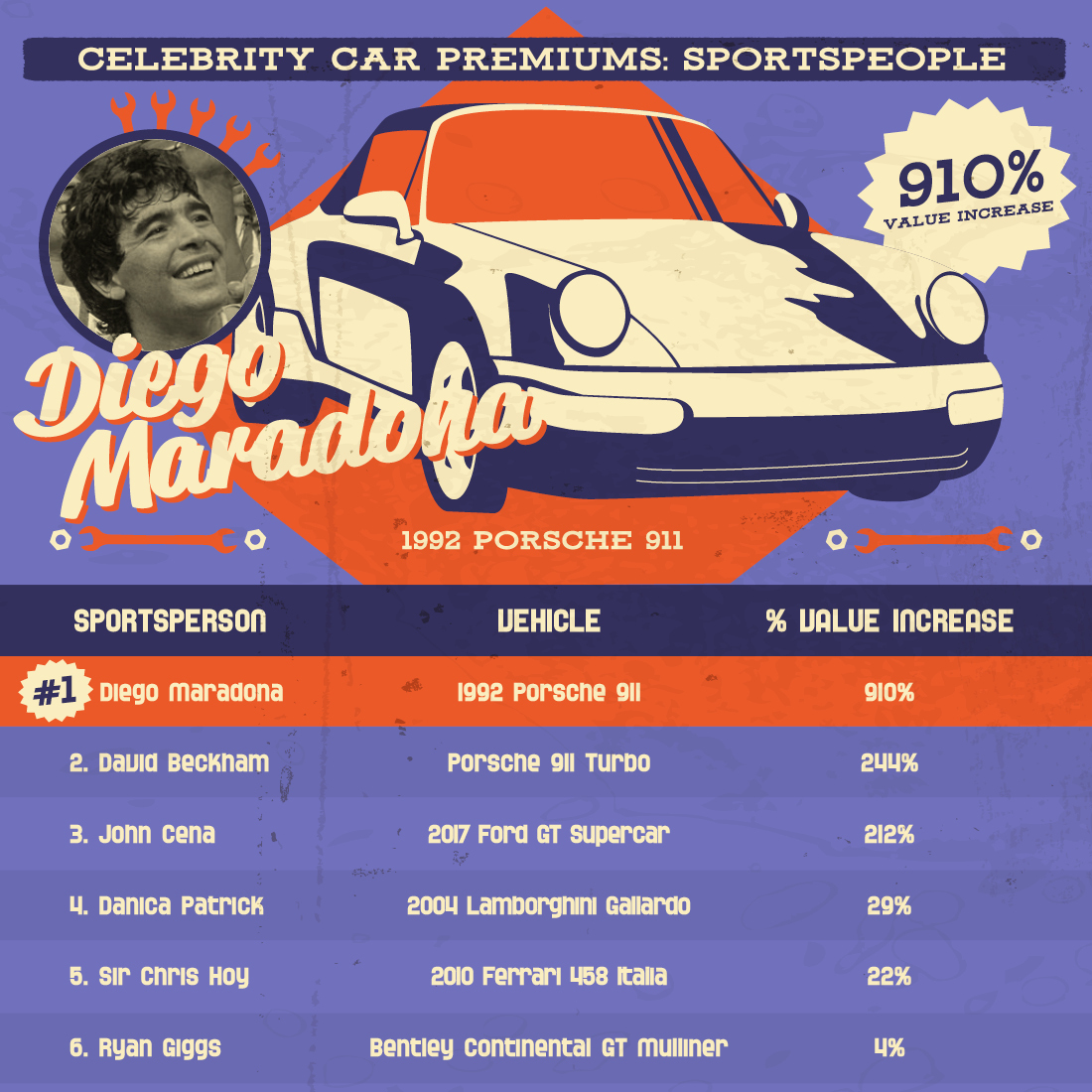 Behind Maradona, David Beckham managed to increase the value of his Porsche 911 Turbo by 244% compared to the average resale in 2018.

The other footballers that cropped up in our research didn’t increase their car value to the same extent as Maradona and Beckham. With Ryan Giggs parting with his Bentley Continental GT Mulliner for less than 5% over its average resale value.

Sir Chris Hoy got more of a name-brand bonus when he bid farewell to his 2010 Ferrari Italia at auction, boosting the average resale by 22% while Danica Patrick, former US racing driver got more than £20k over odds for her Lamborghini Gallardo in January 2019.

While you mull that one over, you can find more auto news and industry updates on the Vanarama blog or check out our latest car leasing deals.