Off the back of UK inflation topping 5% in December 2021, its highest point in over a decade, the Bank of England raised interest rates to 0.25% – more than doubling on the previous rate of 0.1%.

And rising used car prices are only adding to the issue, as a trend that spiked long before this latest interest jump. But how closely linked are they to the overall cost of living in the UK?

With costs increasing, from the usual petrol and diesel prices to even clothing, we look at the figures and how they’ve changed since 2017.

Used Cars One Of The Steepest Price Hikes In Recent Years

By our research, only three costs have seen a bigger increase than used cars, which are now almost 25% more expensive than they were five years ago, according to data from Auto Trader. 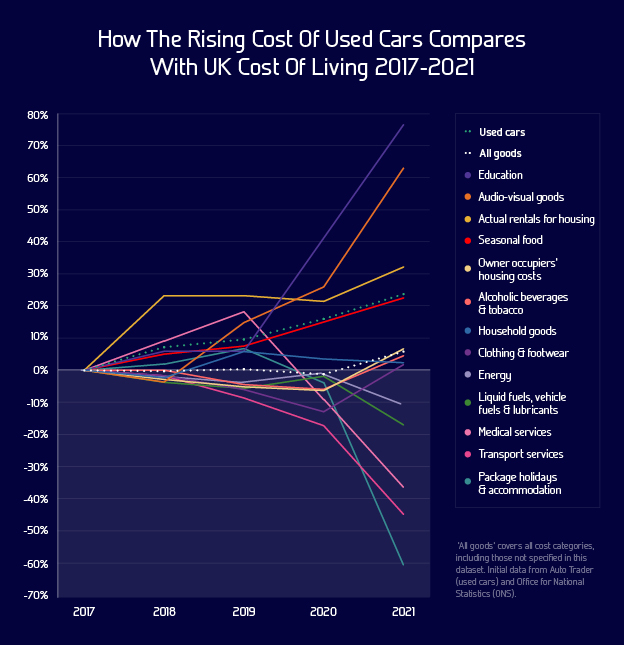 Even alcohol and tobacco, both subject to ever-rising taxes, show a much steadier increase of only 4%. That is largely fuelled by Covid-19 and the lockdowns that meant UK cars were driven less than usual – resulting in lower mileages and therefore higher asking prices. The microchip shortage has also played a part.

It’s a similar story for house rentals, which maintained a steady price between 2018 and 2020, before jumping by a third last year (from 21% to 32%). With more free time and disposable income under the restrictions, many turned to home improvements or moving – and increased demand is often followed by increased costs.

Looking at the average UK salary alongside the average used car price over the past five years, buying used is taking more and more of our disposable income. In 2017, when the typical salary was under £29k and used cars under £10k, a used vehicle took only 41.5% of the average person’s wage.

Initial data from Auto Trader and Statista. Average salaries based on full-time employees and adjusted for inflation.

Since then, however, it’s been on a steady rise – apart from 2018-2019 when the percentage held steady between 43.3% and 43.1%. Now, second-hand vehicles are taking almost 6% more of our disposable income, and quickly approaching 50%.

The increasing disparity wasn’t helped by 2021’s drop in pay (the first post-2000 decrease), while the cost of a used car had its largest yearly increase in more than half a decade.

Both figures calculated as an average of Auto Trader’s first-page results for each model.

The Cost Of UK Transport Services Has Halved Since 2017

At the other end of the results, package holidays saw prices tumbling. Again, this can be explained by lockdowns and restrictions that prevented travel for much of the last two years. Compared to the cost in 2017, holidays are currently down 61%.

Transport and medical services also experienced a drop on their 2017 rates, down 45% and 36% respectively. A 17% reduction in the cost of vehicle fuel will also be welcomed, although the data doesn’t yet reflect the jump we’ve been seeing in recent months – despite the price of oil going the other way.

Energy, largely gas and electric, is also a tenth cheaper. That, combined with over-the-odds used motors and fuel, suggests it could be a good time to consider electric car leasing.

Quick Tips For Getting The Best Car Deal In 2022

Although asking prices are on the up, there are steps you can take to soften the blow and still find a good deal on the forecourts. Follow our tips to stay ahead of the game:

- Work out what you want first. Consider your needs for a car – do you need space for the family, just a small city car for commuting or even fancy switching to electric? This will narrow your search and make it easier to compare models and deals.

- Consider all the buying options, from used to new to leasing. With used prices rising, it may be that the better deals are on new motors – and if you were to choose an in-stock model, you could avoid factory delays.

- Don’t just settle for the first offer you see, as you may find a better deal elsewhere.

Andy Alderson, Vanarama CEO & founder, acknowledges the difficulty in upgrading at the moment, but believes some smart shopping could get you a great deal: ‘Generally, the UK cost of living increases year on year, but used car prices are rising quicker still – up 24% in the last five years. Thanks to heightened demand and global supply issues, that’s likely to stretch into 2022.

‘However, there are still deals to be had for those in the market. Current stock avoids lengthy delays and paying over the odds for a second-hand vehicle. It’s a tricky time to be on the search for your next car, but a little research and some patience will land you in good stead!’

Vanarama compared the latest statistics on UK consumer costs, from the Office for National Statistics (ONS), with Auto Trader’s used car prices for the last five years, to gauge how closely related the current demand and costs are to the overall cost of living.

Visit the Vanarama blog for more automotive insight and research, or browse our car lease deals if you’re in the market for an upgrade.