Electric Cars Vs. Depreciation: Which Model Holds the Most Value?

It's generally accepted that the prestige carmakers - BMW, Mercedes-Benz and Audi, for example - build models that stand the test of time and hold their value.

But, with EV tech improving year on year and many motorists taking the plug, ahem, plunge, those age-old trends could be up for grabs.

We've handpicked ten all-electric models that you can buy right now, from Volkswagen's dinky e-Up! to the award-winning Jaguar I-PACE. The full list of models, specs and all, can be found at the foot of the page. 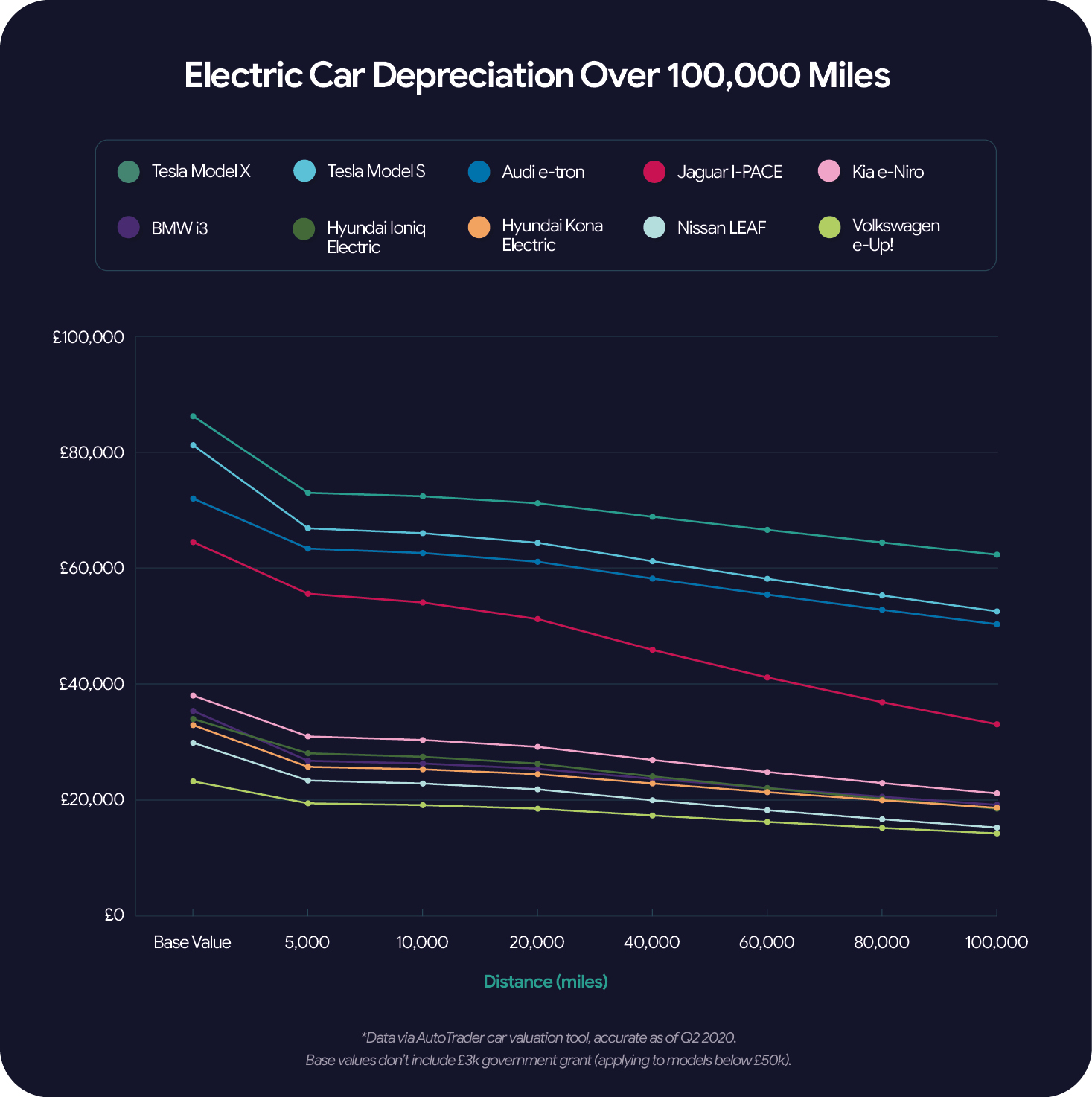 Using a leading online car valuation tool, we input each model as a March 2020 reg and varied the mileage to gauge its impact on value.

It mightn't be a surprise to see Audi, Jaguar and Tesla in the top spots, with the e-tron, I-PACE and Model X, respectively - easily the most talked-about EVs at the moment.

The positions below are more interesting. VW's all-electric e-Up! is expected to drop less than £4k in its first 5,000 miles on the road - a percentage change of only 16%. In stark contrast, BMW's i3 dropped nearly £10k over the same distance. 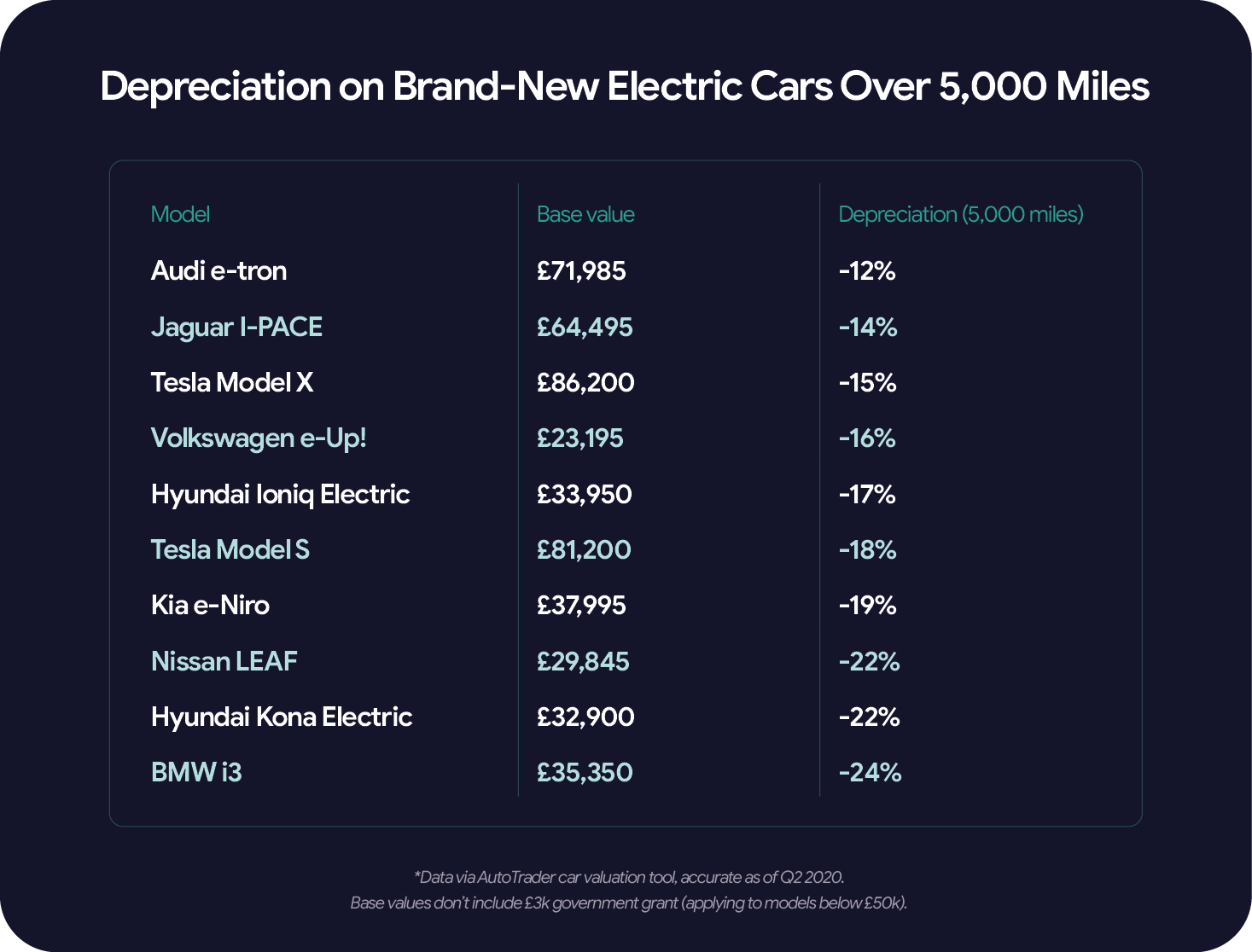 Another wild card is the Hyundai Ioniq Electric, which also finds itself at the more wallet-friendly end of the table, with a drop of only 17% after 5,000 miles. That's good enough to have it brushing shoulders with Tesla's Model S, a model that's more than twice as costly.

Add another 95,000 miles to the clock and the gap between the best and worst performers narrows, but that's not to say there aren't any surprises.

The I-PACE's strong start is undone here, shedding almost half of its £70k-plus price tag and putting it on par with the Nissan LEAF. With over £40k between the two, as of leaving the factory, it's perhaps the best indicator of changing trends.

At the other end, the e-Up! is again - and quite literally - punching above its weight. Only the e-tron and two Tesla models pip it to the podium, with a drop of 39% on its base value. At little over £23k, it's the cheapest on our list and undercuts the top three by over £48k. 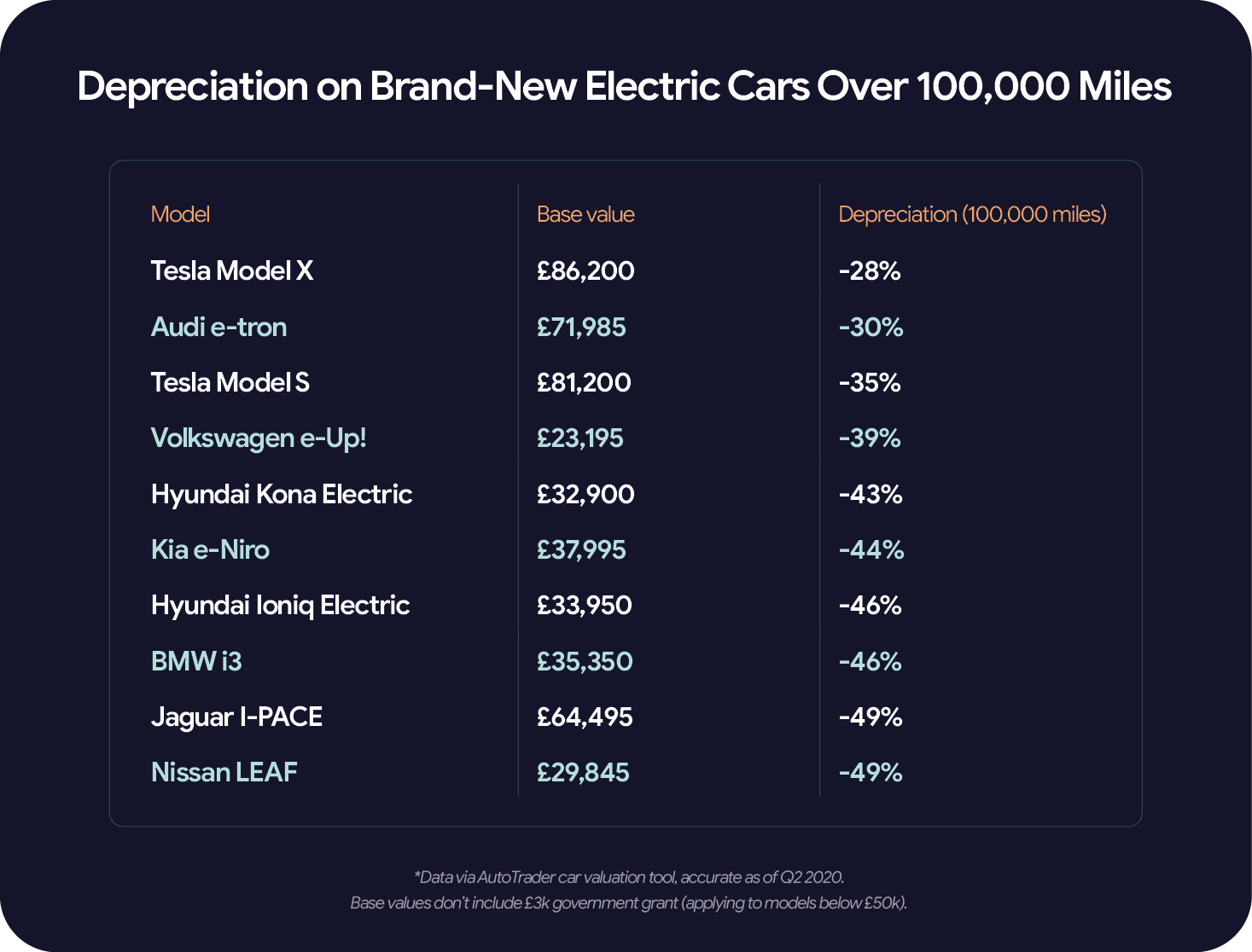 Although far from underdog status these days, Tesla's been credited for its rise from obscurity over the last decade or so; the American EV builder was arguably the first to capitalise on the battery-shaped gap in the automotive industry.

But, considering you'll part with almost £90k for the X and S, it's the Model 3 that will likely produce the most sales. Starting at £42,500 for the Standard Range Plus variant, it's still pricey, but affordable enough to sit in the middle of our price scale.

And the valuator tool we've used reckons it'd lose around 34% between 5,000 and 100,000 miles - certainly far from the worst we've looked at above. It just missed out on making our table because of recent price changes, but this is one to keep an eye on.

Do Electric Cars Depreciate Faster Than Petrol and Diesel?

In short, no. Not judging by our numbers, anyhow. Of the four like-for-like alternatives we've picked out, only the Kia Niro Self-Charging Hybrid dropped a lower percentage than its all-electric counterpart. 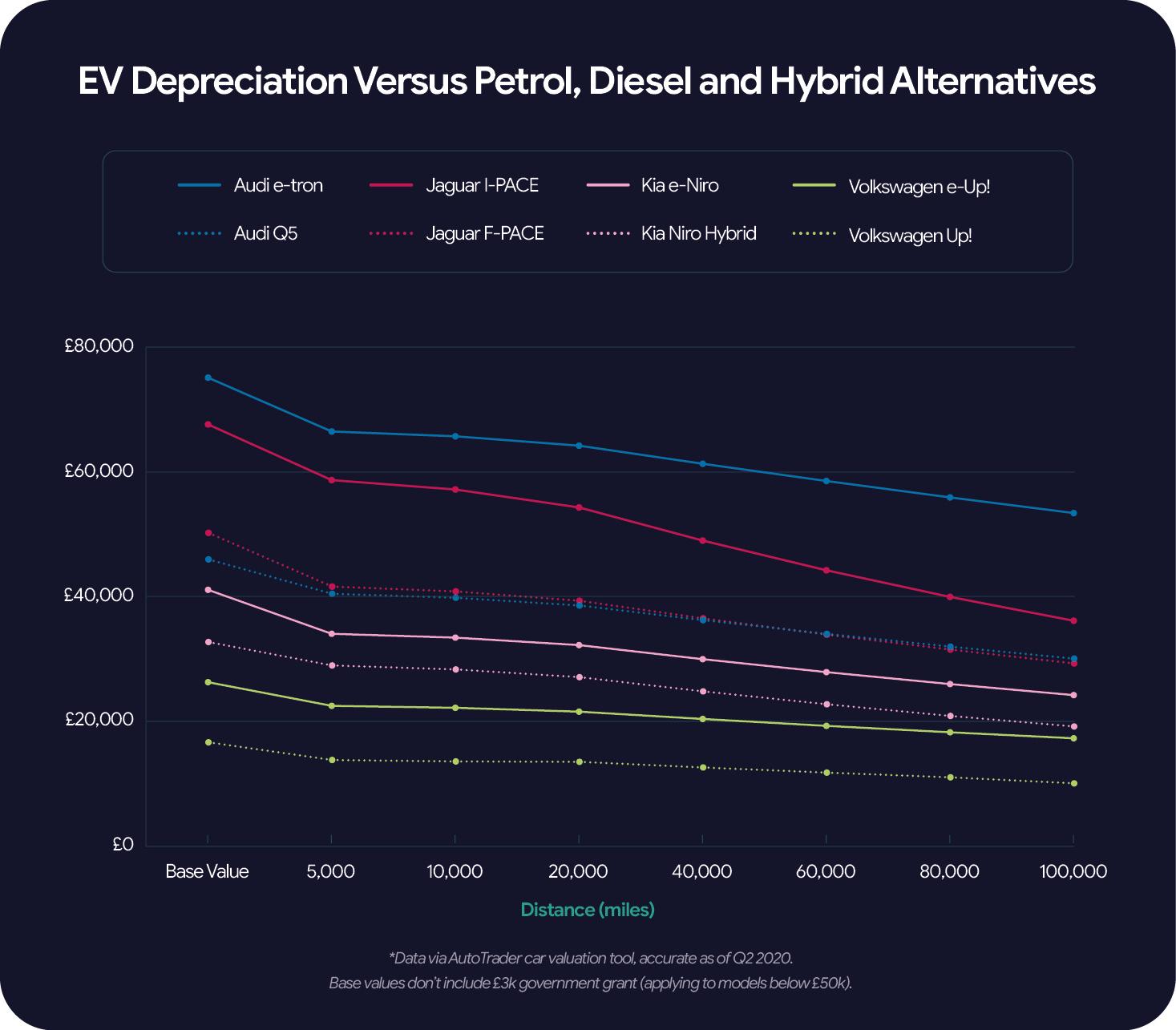 After 100,000 miles, however, it's the F-PACE that fairs best against its battery-powered sibling, losing 44% of its base price - five percent shy of the I-PACE. You'll also pay around £30k less for the privilege; another win.

Despite being the cheapest model we've looked at, the VW Up! seems to come off worst. But, for a model that starts at £13k, the losses aren't as hefty, pound for pound.

Should I Consider Electric Cars Based on Their Lower Depreciation?

Generally, then, the combustion-engined models depreciate quicker than their alternatives but it's worth considering the ever-improving nature of EV tech.

The original Nissan LEAF launched not even ten years ago, but has already near-on doubled its range; what's to say there won't be a similar jump in the next decade?

That's a double-edged sword, though, as continued advances may harm the values of the models above. Ultimately, the best way of looking at it might be affordability, both long and short term.

If you want to cut down on the cost of a brand-new motor, a petrol, diesel or even hybrid could come in quite a bit cheaper than something solely battery powered.

Or, if you want to cut on running costs, the lowered fuel bills and non-existent road tax of an all-electric EV will appeal.

Either way, the likes of the Ioniq Electric and e-Up! show there's reason for the giants - BMW, Audi and the sort - to look over their shoulders, and reason for you to start the research on your next car.

For more industry insights and features head to the Vanarama blog, or browse our cars lease deals.

Models Featured In Our Research