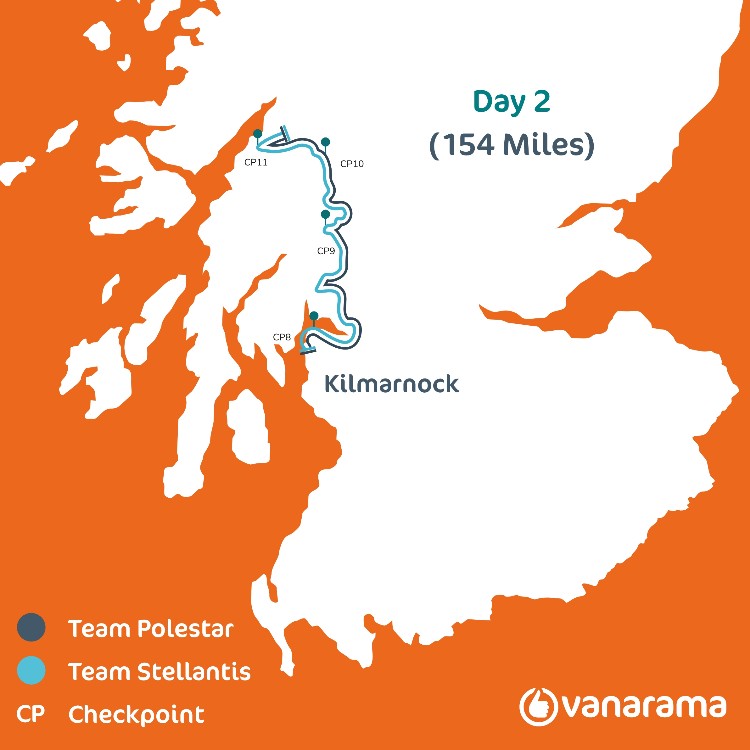 In terms of outright mileage, Day 2 of EVROS 2021 promised less distance than Day 1 – but far more dramatic scenery, as the rally hugged Scotland’s western reaches to head from Kilmarnock to Fort William. Team 2 switched from one Stellantis electric car, in the form of the Citroen e-C4 to another, this time piloting a green (in both senses of the word) Vauxhall Mokka-e for the 2nd stint, but Team 1 remained in the superb Polestar 2. The initial stages of Day 2 took in the coast and countryside to the south-west of Glasgow and Paisley, including a trip to the Braes Hub charging points (Checkpoint 7 of all 30 involved on EVROS) at Saltcoats. Both Vanarama cars opted for a brief charge here, but the Mokka-e of Team 2 was hooked up to an AC 7kW for such a short space of time that less than a single kilowatt-hour was added to the battery, so no difference was made to its condition or driving range.

From there, both our cars serenely tracked each other’s progress, meeting again at Checkpoint 8 in front of the Gothic splendour of Paisley Abbey. From there, Team 1 and the Polestar – again running with greater range from its larger 78kWh battery – made directly for Checkpoint 9, the Sloy Hydro Power Station on the banks of stunningly picturesque Loch Lomond.

Team 2, meanwhile, in the Mokka-e conducted an ultimately fruitless search for a vacant 50kW DC charging point in and around Balloch, the town at the southern end of the loch, and also later in Luss, further up the west bank. In the end, we decided to join our colleagues for filming and photo ops at Sloy, where the weather was fine and sunny, and the views simply magnificent.

Again, the Polestar crew decided to press on into the spectacular landscapes of Glencoe, eventually enjoying a delicious-looking haggis-and-cheese baked tattie at the Glencoe Mountain Resort ski centre, just near Checkpoint 10 at the Kingshouse Hotel, while simultaneously charging the car at the same location; handy for EV drivers, given the wildness of the terrain up in Glencoe. But Team 2, down to less than 30 miles of range and 20% battery power, needed a charge for the Mokka-e. A total of 3 DC rapid charging points were shown on Zap Map, in the neighbouring villages of Crianlarich and Tyndrum, with the community spirit among the EVROS competitors proving useful – a team further up the road had reported, via WhatsApp group messaging, that the 2 chargers in Tyndrum were both free.

However, the solitary Evolt 50kW unit in Crianlarich was also vacant as we arrived, so we dropped in there to replenish the Vauxhall’s battery. After some initial hesitance from the connection between car and charging point, eventually a DC rapid charge was under way, allowing Team 2 to head off to a nearby Londis to pick up some provisions for lunch. By the time we’d got back to the car and eaten our sarnies, a mere 18 minutes and 56 seconds of charging had seen 29.6kWh pumped in to return the Mokka-e’s battery condition to 82% - good for 152 miles of motoring.

Catching up to Team 1 and ticking off Checkpoint 10, Toby had a brilliant encounter with a very tame deer at the Kingshouse Hotel, which also resulted in him receiving a soaking as the weather had suddenly turned very glowering and moody, with a heavy shower lashing in from the west. However, Glencoe looks truly awesome come rain or shine, and Toby was delighted to have snapped the deer up close, so all was good.

More filming and photography followed us for the rest of the trip, with the weather alternating between foul and fine, and once Checkpoint 11 had been covered at – unusually enough – the salubrious surroundings of Kinlochleven community toilets, it was off to Fort William (22 miles distant) for the end of another thoroughly enjoyable day. This included travelling along the wonderful and undulating B863, first along the southern edge of Loch Leven and then back across the northern shore towards the A82 at North Ballachulish. The light quality was sublime heading back westwards as the sun set, so more footage and pics of the Mokka-e were bagged before a last run on the fringes of Loch Linnhe saw us rolling into Fort William at 5pm to once more join up with Vanarama Team 1. A slight issue with the DC chargers available in the town meant getting the cars up to 80% might have been a challenge – the Mokka-e, at this point, was on 28% and around 29 miles of range, while the Polestar was hovering near 50% – but an outrageous stroke of fortune played into our hands, as Mark bumped into a local taxi driver who owned a Kia e-Niro (and had previously owned 2 Teslas; there’s a huge bank of Tesla Superchargers in Fort William for reference, EV fans) and generously allowed us to use his personal 50kW DC charger.

A swift drink in a hotel and around 45 minutes later, we returned to the Vauxhall to see it showing 94% battery and 183 miles of range, good to hand it over the crew who will be running it on Day 3 – Team 2 due to move to a DS 3 Crossback E-Tense. Meanwhile, the Polestar 2 of Vanarama Team 1 will be charged to 100% early on Day 3, the stage which is being dubbed ‘The Beast’ by EVROS organisers because it involves the most miles of all as we loop around the very top of Scotland to Thurso on some properly challenging roads.

This’ll be a proper stress-test of running an EV, so stay tuned to find out how we both do tomorrow…