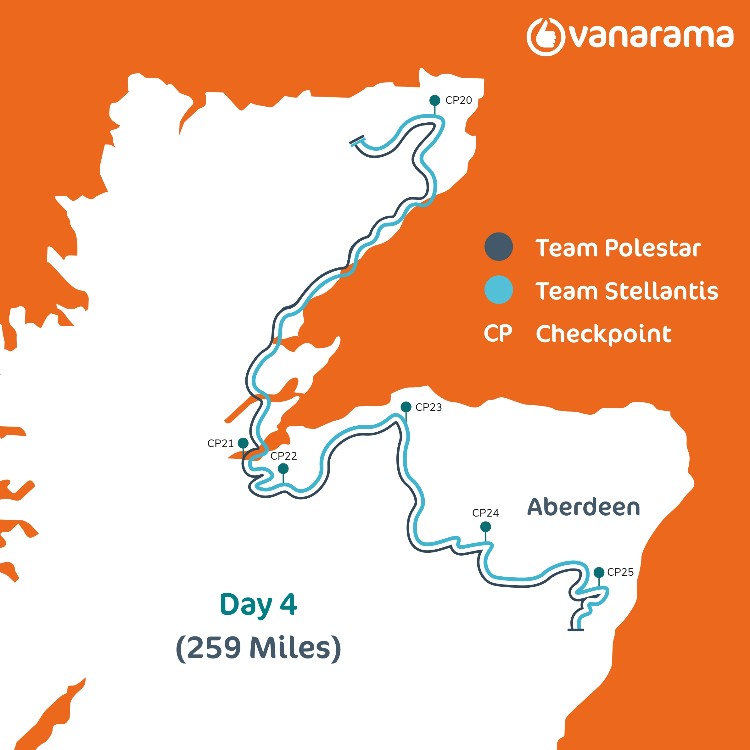 After the sheer excitement and peril of ‘The Beast’ on Day 3 of EVROS, Day 4 did feel – sadly – a little bit like ‘after the Lord Mayor’s show’. This was through no fault of the organisers, nor the East Coast of Scotland, which remains a beautiful and captivating place – if less dramatic in appearance than the more rugged west of the country.

But, nevertheless, it was a day more about covering a significant amount of miles, rather than seeing truly splendid scenery and sights. The 2 Vanarama teams left Thurso in slightly different shape in terms of battery capacity and range – the Polestar 2 of Team 1 had been cannily left on charge all night, so was showing 100% range and well in excess of 200 miles of driving capability. Meanwhile, Team 2 returned to the Citroen e-C4they had been driving on Day 1, and it was on about 80% with 170 miles of range.

And thus the day’s driving followed a familiar pattern seen throughout the rally: Team 1 and the Polestar largely breezed through the near-270 miles of distance, requiring just 1 charging session at Inverness Caledonian Thistle’s ground next to the Moray Firth. They even had enough time to have 2 dinners, enjoying one on the banks of Loch Ness and then another at the hotel in Aberdeen later that evening. It was a very straightforward session of driving. For Team 2, things were not quite as simple. After both cars attended the full EVROS Remembrance Sunday gathering at John O’Groats at 11am, they filtered onto the A99/A9 southbound in the direction of Inverness. The Polestar was going to make it all the way, but the Citroen was not, so we only kept pace with each other for the first 40 to 50 miles or thereabouts. This, for Team 2, began a succession of finding a number of charging units throughout the entire day that were either occupied, out of order or simply unsuitable 7kW AC posts in business parks. It began when the free Evolt charger in Brora, next to the Co-op, failed to communicate with the car. Luckily, the A9 has been heavily electrified along its whole length so in the next village down the coast, Golspie, another Evolt 50kW DC charger was located and turned out to be operational.

That session took 36 minutes and 23 seconds, and pumped almost 31kWh into the e-C4’s battery, but by this time it was getting on for 3pm and the next checkpoint at Inverness Castle was still more than 50 miles away. By the time Team 2 had ticked off the castle (Checkpoint 21) and Dores Beach (Checkpoint 22) at the top of Loch Ness, it was now well past 4.30pm and getting dark. From there, it was mainly following the A96 towards Aberdeen, but heavy traffic to the east of Inverness, coupled with another frustrating session of trying to find charge points in both Forres and Elgin which largely proved fruitless, saw a lot of precious time ebbing away. Eventually, a charger was found near council offices in the latter town, but there was already a local driver in a Volkswagen e-Golf at the solitary CCS connection and he was reporting that the unit had failed.

The e-Golf driver departed without charging, but videographer Toby persisted with trying to hard-reset the Evolt unit, eventually succeeding at the 5th time of trying. The charger did a decent job of flowing energy into the e-C4’s battery, replenishing the Citroen to 80% and 167 miles of range with 29.08kWh delivered in around 40 minutes.

After this, it was a case of balancing speed with the rate of battery depletion, as the hotel in Aberdeen stopped taking food orders at 9pm (we’d missed dinner the night before due to the wild charging antics from UIlapool onwards) and we were damned if we were going to miss out on some grub again.

Checkpoints 23 (Moray Motor Museum in Elgin) and 24 (the shopping centre in Inverurie, 40 miles down the roads) were quickly dispatched, but more charge was needed to hand the Citroen over to the next team with enough driving range for Day 5. Thankfully, the first 50kW-plus charging station of the entire trip was found – a glorious 350kW DC Era Supercharge station at Blackburn, just off the A96 to the west of Aberdeen.

It wouldn’t accept our RFID, despite the sign on the wall saying it did, so £8.11 of electric (19.15kWh) was put into the e-C4 in just 19 minutes 55 seconds. At its peak, the Citroen’s dashboard display said 310 miles of range was being added every hour on the Era unit and we unhooked with the battery at 81%.

That was enough to roll the Citroen into the overnight hotel’s car park with 74% battery left and more than 150 miles on the odometer, but as we arrived in Aberdeen at 9pm – having left Loch Ness around 5pm – and our colleagues in Team 1 had been there for a good hour or so before our arrival, despite leaving the loch about 30 or 40 minutes after us, all this served to show was 1 key thing: longer-range electric cars are considerably better and easier to live with than short-range ones, because they better insulate you from the vagaries and randomness of the UK EV charging network.

Day 5 promises a straight scoot down towards Dundee, then across to Falkirk and on to the ultimate EVROS finish line at Glasgow, but a late-night blow-out on Team 2’s next set of wheels – the DS 3 Crossback E-Tense of Day 3; we were supposed to be in a Peugeot e-208 for the final leg of EVROS but Toby’s huge Peli case and our other belongings will never fit in the French electric supermini – puts a serious question mark on our ability to tick off the final 6 checkpoints of the rally on the last day. Tune in tomorrow to find out whether Team 2 makes it or not…