Is The UK Ready For Driverless Cars?

The march towards a driverless future continues. In 2020 the British government launched a consultation that could lead to driverless cars being legal on UK roads as early as late 2021. They are also considering proposals to allow these driverless systems to operate on roads with speeds of up to 70mph.

It was also recently reported that Apple is planning to release a driverless car in 2024 'with next-level battery technology', showing that in the next 5 years or so, this space will see a large influx of companies starting to enter the market. The question is, with self-driving technology being such a drastic change from how we operate cars today, is the public ready to trust driverless cars?

Vanarama surveyed 1,000 members of the UK public to find out.

Ever since the first ever car was made by Carl Benz in 1885, we have always taken personal control of our vehicles, but 136 years later things could be about to change. The prospect of driverless technology integrated into cars has raised some concerns by motorists asking will it really be safe?

Driverless cars continuously map their surroundings using a variety of highly attuned censors placed on different parts of the car. Lidar sensors send out pulses of light to detect the surroundings of the vehicle such as other cars, road markings and road edges.

Once the car is in motion on the road, a computer makes decisions based on its surroundings such as plotting a path through traffic, when to accelerate, when to brake and obstacle avoidance. 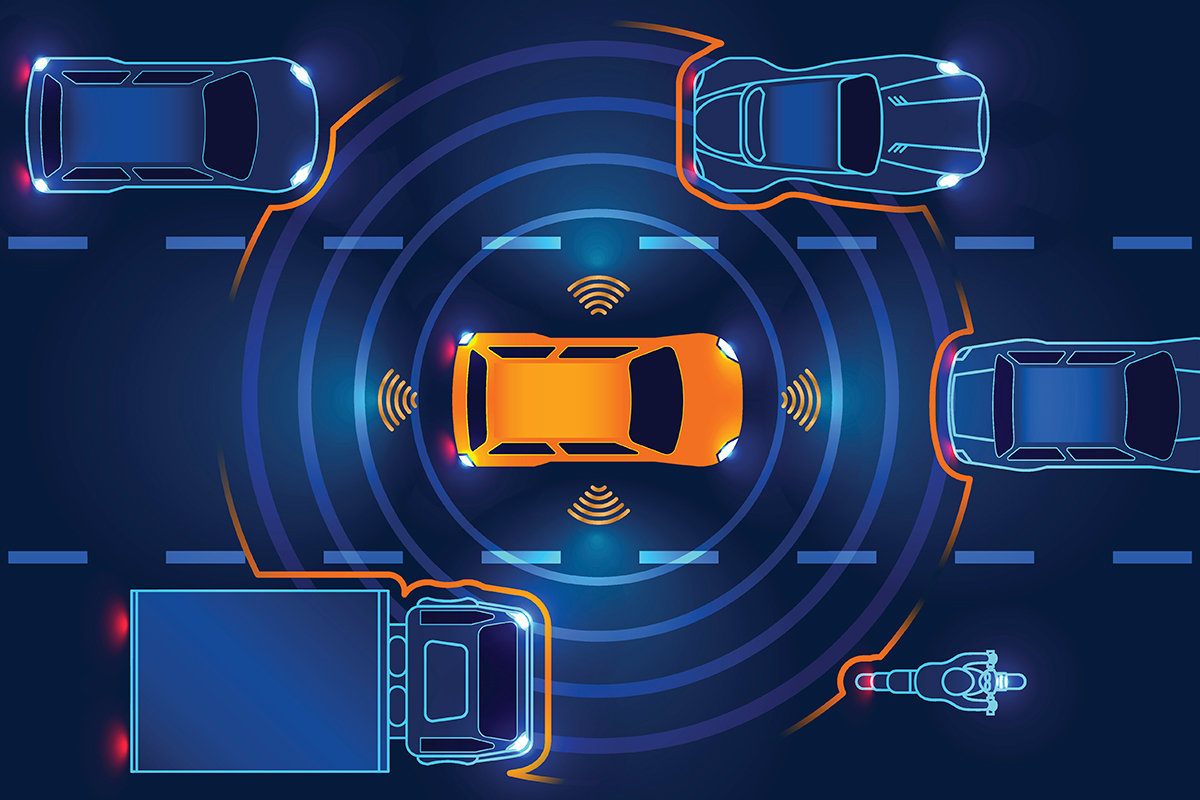 Despite the world's biggest car brands insisting that their driverless technology will improve road safety, not hinder it, our survey has revealed that there's something about not being in charge of your own destiny that many motorists dislike. A common concern raised is that they simply don't trust the technology within the car to do a better job than them at making decisions on the road or avoiding a collision should the situation arise.

It will most likely take some time for motorists to completely trust their new driverless cars.

Over 70% Of Brits Wouldn't Feel Safe In A Driverless Car

In order for driverless cars to be widely adopted in the UK and other nations once that they arrive in car showrooms, there needs to be trust in the technology that powers them. It will be an extremely strange sensation allowing the car to drive for you after driving yourself your entire life and to do this motorists must be certain of the car's capabilities.

However, our survey has revealed that 73% of Brits currently wouldn't feel safe being transported by a driverless car, showing that car and technology companies still have much work to do to convince people to give up control.

89% of motorists told us the main reason for this is that they simply don't believe that UK roads are ready for driverless cars in the near future.

Perhaps more evidence of this distrust is when people have a good knees-up. When we asked motorists would they feel comfortable drinking alcohol before or while using a driverless car, which has been speculated about also being allowed by law, 83% told us they wouldn't feel comfortable doing this.

One of the positive aspects often talked about driverless cars is that they will enable people to save a lot of time. An example of this is the school run. If parents can send their children to school in a driverless car, that will give them more time in the morning to do household chores and get ready for work.

However, due to their lack of confidence in driverless cars, nearly 9 out of 10 people told us they wouldn't trust a driverless car to take their children to school alone.

Despite the promise of the technology within driverless cars being able to think faster than their human occupants and spot possible danger within a microsecond, motorists still aren't sold.

When we asked motorists if they trust driverless cars to identify and respond to hazards better than humans, nearly four out of five said they don't, despite what car and technology companies might tell us.

Because of this, 95% of motorists believe there should be an option for someone to take manual control of the driverless car, although 9% think that it should only be allowed in emergencies. 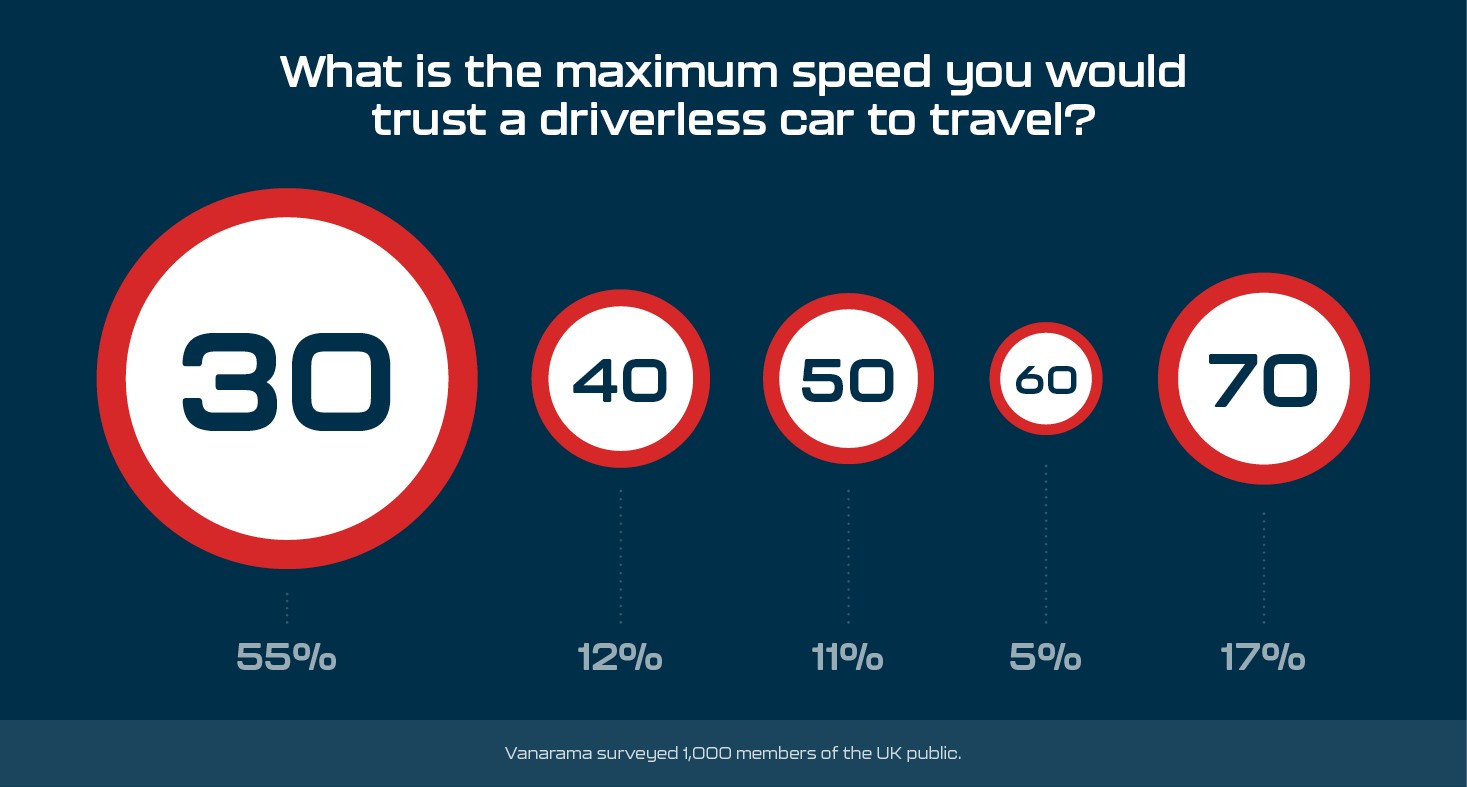 With trust in driverless cars low according to our study, it's no wonder that most Brits wouldn't trust their self-driving vehicle to hit speeds exceeding 30mph.

Only 17% told us they would be happy for their driverless car to take them on the motorway and reach speeds of up to 70mph. In the future, it seems certain that the speed of the driverless car will cause a lot of arguments between families and friends, especially when they are first adopted.

As you might expect, with most motorists not trusting a driverless car to exceed 30mph, most people would prefer to drive themselves.

71% told us that they would skip the driverless tech to take control of their vehicle, while only 10% told us they would always want to be driven by the car. The remaining 19% said they would prefer a combination of the two, depending on the situation.

1/3 Of Brits Would Never Trust A Driverless Car – Ever! 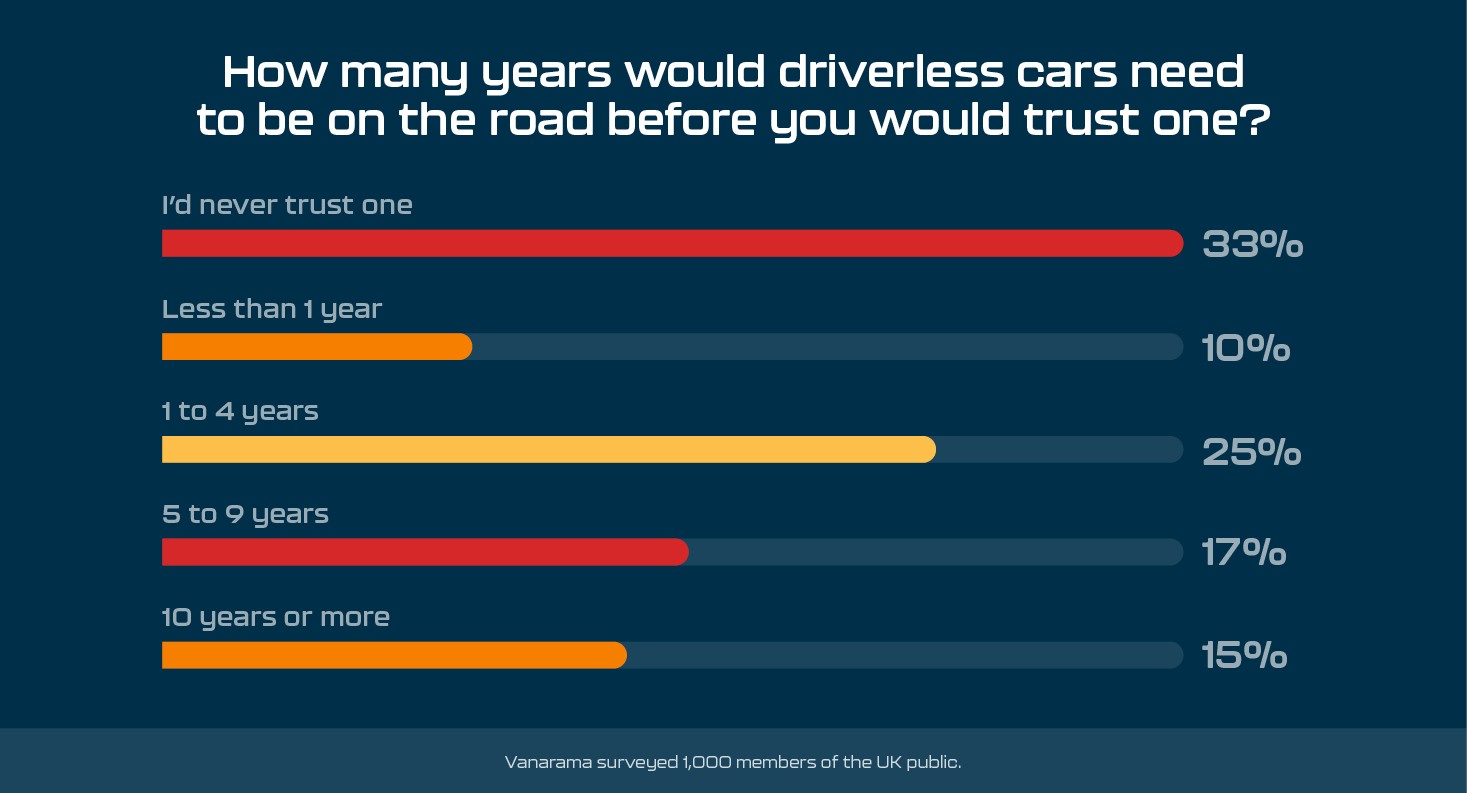 With driverless cars set to be commonplace on UK roads by 2030, we asked people how long they would have to be on roads for before they would begin to trust them. Surprisingly, a third of the UK public told us that they feel they could never trust a driverless car – warning signs for the future chances of wide scale adoption by the public.

However, 67% of motorists told us they would be prepared to trust a driverless car depending on how long they had been on the road, with the most common answer being between one to four years.

Nearly one in five people told us that they would want driverless cars to be on the roads for over a decade before they would trust that they were safe.

Unfortunately, the driverless cars aren't ready just yet, but why not browse our current car leasing special offers?