Revealed: The Most Expensive Car-Related NFTs

How much money do you think people would spend on a car they couldn’t drive? The answer, apparently, is millions...

Automotive manufacturers and enthusiasts are getting involved in non-fungible tokens (NFTs), generating sales of millions of pounds. An NFT is essentially a unique or limited digital asset that is sold and traded, and can be an image, video, sound clip, or even a tweet. When you buy an NFT, you have ownership of it, although anyone can download it and look at it.

Car NFTs are specifically created with car owners in mind – and just like cars in the real world, their rarity makes them all the more desirable, including unique digital assets produced by luxury manufacturers. Some, on the other hand, are created by independent artists.

While NFTs have typically been used for owning digital art, they will also be used in the Metaverse, a digital 3D world users can access with a virtual reality headset. For example, NFTs can be used to identify if somebody owns a virtual piece of real estate – or virtual product, like a car.

While the other digital collectibles in our research may be usable to a degree in the Metaverse – such as 3D models that can be placed on a virtual driveway of a virtual home – the most expensive collectible in our finding is little more than a 2D graphic. For the cost of this one NFT, Car Man Logo, you could instead buy the UK’s average car (worth £20,000) 311 times over, or purchase a real-world, original Aston Martin DB5 (£5.7 million) – one of the most sought-after classic cars in existence. 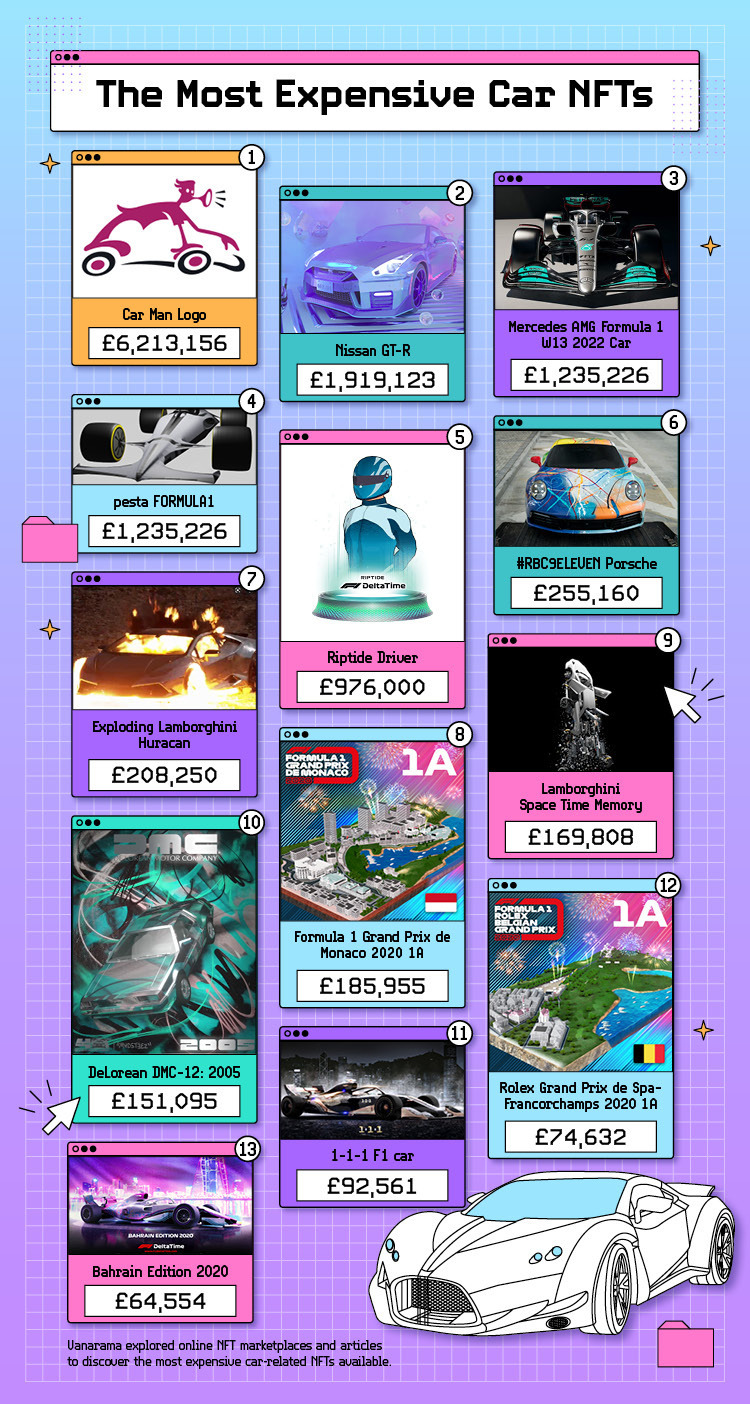 Ever dreamt of owning a Lamborghini Huracan? The real-world value of one of these cars is £164,400, which is actually cheaper than buying a video of one being decimated – yes, somebody bought and blew up a Lamborghini Huracan, then sold the digital collectible for £208,250.

However, Shl0ms, the NFT artist in question, has stated that rather than making money, the NFT was a “more general criticism of greed and short-termism in crypto”. The artist has also said that the majority of profit will be put towards public installations of art.

The average price of a standard DeLorean DMC-12 is £41,169, but its NFT counterpart is priced at £151,095 – more than three times the cost. The DeLorean is famed for being the time-traveling machine in the Back to the Future trilogy, with replicas of the movie model actually costing less than the digital bragging rights of an NFT at around £60,830.

After a user has purchased the DeLorean DMC-12 NFT that is worth more than the physical thing, however, they still don’t have copyright over the digital asset. The person who created the NFT remains the copyright owner, meaning they can copy, distribute, and modify the content. 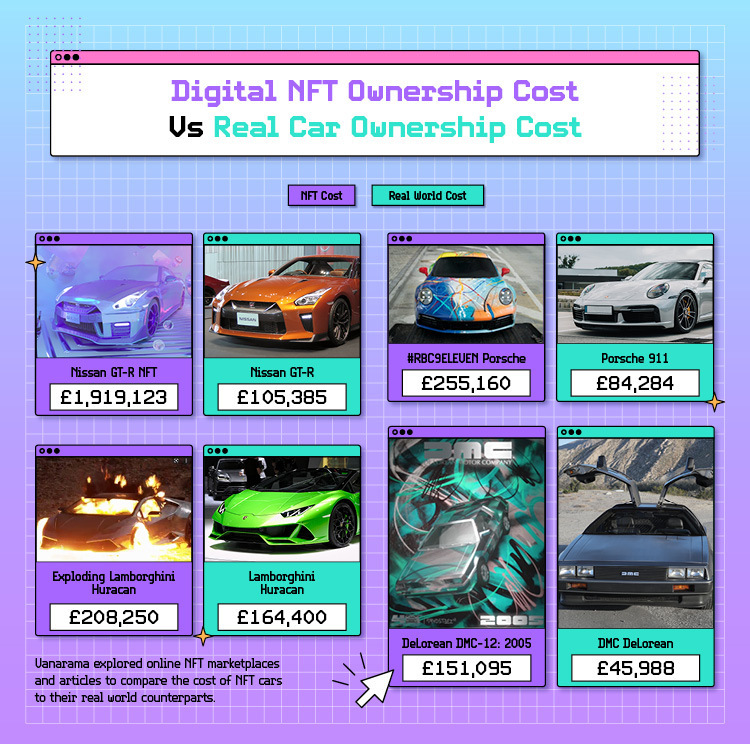 The NFT market is more volatile than the automotive industry

As the debate around digital collectibles and their sustainability continues, it’s worth noting that the NFT market is a volatile one, as it was reported in July 2022 that sales have hit a 12-month low following a crypto crash. Values can fluctuate on a daily basis, and while the automotive industry is certainly no stranger to varying prices, NFTs have seen their total volume drop more than half, from £47.8 billion on 1 May to £22.8 billion 25 May this year.

Plus, due to how unique each NFT is, trading them is actually harder than cryptocurrencies. According to The Chainalysis 2021 NFT Market Report, only 44% of NFT trades make money, including only 29% of newly minted NFTs.

Research has found that one single NFT transaction averaged a footprint of 48kg CO2, which rises to 211kg for just owning of minting an NFT – which means publishing your token on the blockchain to make it purchasable. According to our research, this is estimated to be the same amount of carbon emissions as driving 621 miles in a petrol car, or an EU resident’s electricity consumption for a full month. The daily emissions of storing and holding NFTs is only going to keep growing.

As we battle rising CO2 levels and extreme weather in the UK, with infrastructure and legislation edging us towards electric vehicles and low-emission zones, it feels disheartening that there is a new greenhouse gas emitter. NFTs require a lot of computing power that contributes to rising greenhouse gases, throwing serious doubt on the sustainability of these digital art pieces.

The Ethereum blockchain – a community-ran technology that powers cryptocurrency – processes thousands of transactions every day. The power used to generate one transaction is the same as one average household over a day and a half.

Our research shows that car-related digital collectibles are not only much more expensive than a real-world, driveable car, but they could also be much more harmful to the environment.

Related Articles
The Most Popular UK Historical Road-Trip Destinations
A road trip to some of the UK’s iconic destinations is a great starting point for your next holiday!Read More
8 Road Trip Games To Keep The Kids Entertained
Are you heading on a family road trip soon? Keep the kids entertained with these fun car games...Read More
What’s Best: Air Con Switched On Or Windows Open?
A question that always comes to mind as those inevitable warmer days start to roll in...Read More
This website stores cookies on your computer. These cookies will allow us to remember you and your preferences.
We use this information to improve your browsing experience.
To find out more, please read our
cookie policy.