The Evolution of Autonomous Cars On-Screen

Self-driving cars are becoming a more realistic prospect with each passing year as companies from the traditional (Toyota, Audi and BMW) to the more disruptive (Tesla, Google and Uber) race to be the first to produce an intelligent vehicle that can get you from A to B without you needing to lift a finger.

There's a financial incentive for this urgency to be number one. The global market for autonomous vehicles is projected to be valued at $615bn by 2026.

So, it's no surprise this tech has captured the imagination of Hollywood since the swinging sixties. On-screen automation has been portrayed through predictions of future technology, supernatural forces, or partnerships with people working on the real deal. This has meant there's been no shortage of iconic self-driving cars on-screen.

To show how attitudes and predictions about driverless cars evolved, we've created a timeline of how they have been portrayed in film over the past several decades and looked at how close fictional tech was to reality at the time. 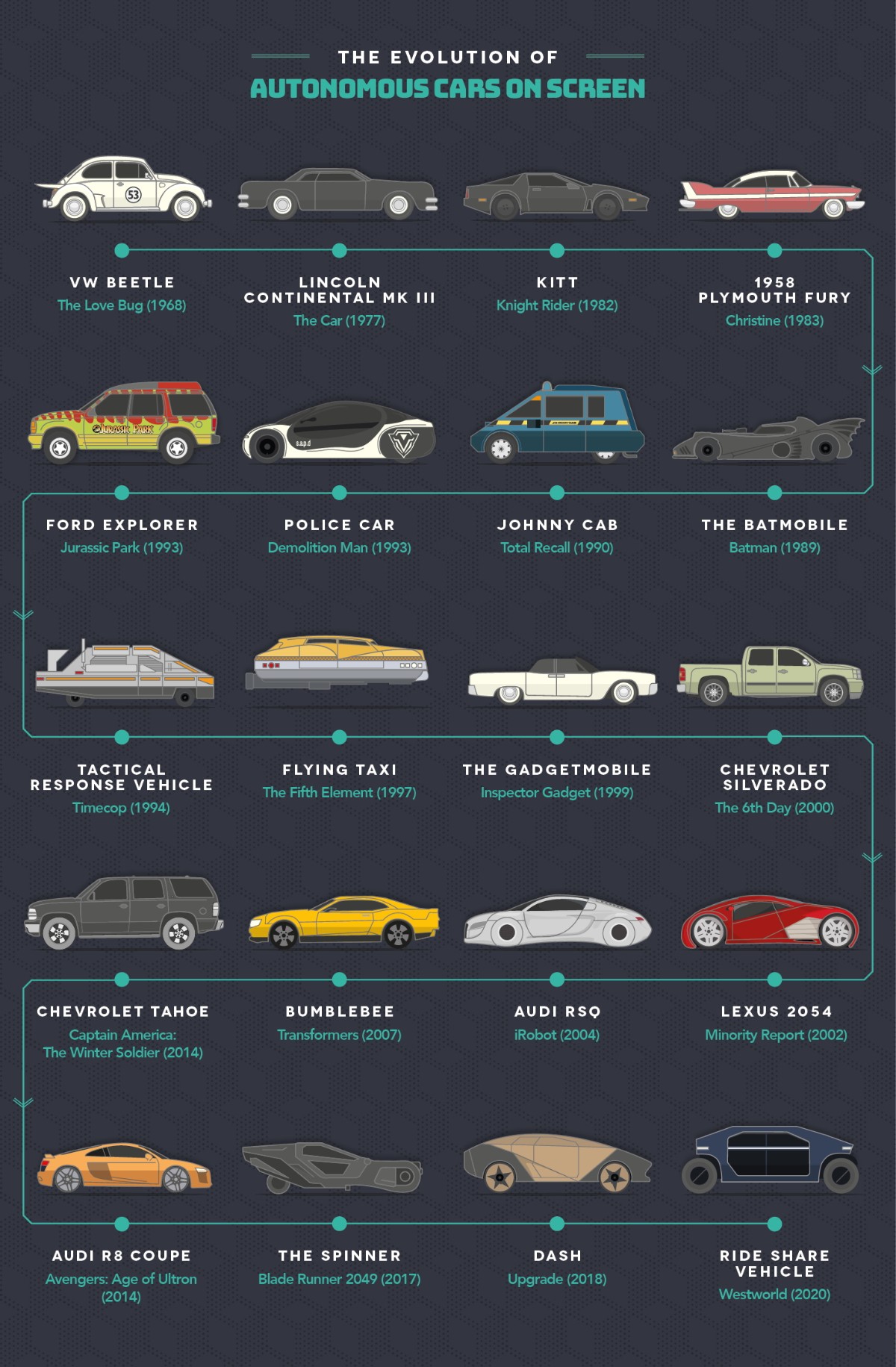 A Timeline of Self-Driving Cars: What Did the Movies Get Right?

Although the concept of self-driving cars has been around since the 1920s, with rudimentary demonstrations conducted to wow crowds at events like the World's Fair – it would be a few decades before anything remotely sophisticated emerged.

Alongside these advances, the most recognisable autonomous cars on-screen began to appear in the 1960s as the technology started to develop beyond basic radio transmitter commands and publicity stunts.

Let's delve into how close filmmakers were to the reality of self-driving vehicles and what their creations said about attitudes towards the future of travel.

The 60s and 70s saw some first steps being taken towards what we now recognise as truly autonomous vehicles. Most tests conducted during this time used buried cables to help guide driverless cars around tracks in test conditions.

However, it wasn't all life-sized Scalextric. In the mid-70s work began on developing the automated logic needed for vehicles to become truly self-driving laying the groundwork for the rapid progress over the following decades.

On-screen, self-driving cars were taking a completely different road. With actual technology in such a nascent phase, moviegoers were shown visions of autonomous vehicles as something supernatural. Whether that was in the form of the delightful VW Beetle Herbie in 'The Love Bug', or the murderous Lincoln Continental from 70s horror classic 'The Car'.

The progress towards driverless cars really kicked into gear throughout the 80s and 90s with numerous tests from manufacturers, technology institutes and universities proving that long-distance travel – up to thousands of miles – was possible in (mostly) automated vehicles.

1999 even saw the unveiling of what was billed as the 'first truly driverless vehicle ', the ParkShuttle. Transporting people between Kralingse Zoom metro station in Rotterdam to the Rivium business park in Capelle aan den Ijssel, they're electrically operated and have no inputs for a human driver. The service is still in action today and, as of 2019, has been updated to allow the shuttles to drive through mixed traffic.

If you were asked to think of a 'sci-fi vehicle', odds are you'll imagine one that looks like the on-screen versions from the 80s and 90s. Sleek lines, full of gadgets and sometimes even the ability to fly, this era of cinema chose to have fun with self-driving vehicles rather than aim for accuracy.

This design-style remains in the popular consciousness, with Tesla's Cybertruck clearly taking inspiration from the era. Elon Musk may claim it's based on the Lotus Esprit from 'The Spy Who Loved Me' – but put it alongside the angular police vehicles from 'Timecop' and there's more than a passing resemblance.

That's not to say there weren't some more grounded examples on-screen. The computer-guided Ford Explorers from 'Jurassic Park' aligned closer to what was possible at the time and, if anything, were a bit more primitive as they were attached to a track.

As the technology to power self-driving cars moved from government labs to the R&D departments of mainstream manufacturers, the 2000s and 2010s saw rapid progress towards roads populated with automated vehicles.

However, with increased testing came higher risk as the fatal consequences of an accident involving a driverless Uber in 2018 made clear. This has led to stricter testing criteria and the need for the companies investing in the technology to reassure the public of the safety of autonomous vehicles.

Even as the sci-fi concept of self-driving cars moved closer to reality, there was clearly still a bit of mileage to cover.

Heading into the 2000s, movies tended to lean more towards a more grounded sci-fi approach of keeping driving tech believable and less flashy. For instance, the Spinner from 'Blade Runner 2049' makes even flying cars feel lived in and almost mundane. Bumblebee from Transformers is the obvious exception that proves the rule here – we haven't made contact with the Autobots just yes.

This was taken a step further through the use of actual concept cars from manufacturers like Audi and Lexus, which began a trend in movies which continues today, combining product placement with thrilling autonomous car sequences.

What's Next For Autonomous Cars? 2020 And Beyond

The most recent advances in autonomous tech include…

A recent study by trend analysts ResearchAndMarkets has predicted that the global autonomous market is likely to reach a value of $615bn by 2026. Their forecast looks at existing valuations from 2017 when the market for self-driving vehicles accounted for $27bn. Put simply, this means that self-driving cars are big business.

However, there's still a hurdle for autonomous vehicles before they'll be widely adopted and that's public opinion.

2020 survey results shared by Partners for Automated Vehicle Education (PAVE), a partnership of industry bodies and non-profits aiming to improve people's understanding of self-driving vehicles found that 3 out of 4 Americans don't trust that the technology is ready for wider use. They also found that 20% of respondents think autonomous vehicles will never be safe and 48% would never get in a taxi or ride-sharing vehicle that was self-driving.

However, this hasn't stopped companies like Uber pushing for driverless fleets and modern sci-fi has been taking notice of the potential for a completely autonomous vehicle to pick you up and ferry you from A to B at the tap of a screen.

Season 3 of 'Westworld' proved the writers have been keeping up with developments in the autonomous vehicle field. Their self-driving ride-share vehicles and the intelligent motorbike used by its protagonists are not all that far-fetched and you can expect to see advancements in these areas springing up in the next few years. Let's hope whoever wins the race to automate our roads has more noble intentions than the show's sinister Delos Corporation!

What next? Well, while you're here – why not browse our car leasing deals