The Stellantis large van brands - Citroen, Fiat, Peugeot and Vauxhall - have a great reputation for producing no-nonsense, fit-for-purpose workhorses with class-leading payloads. All manufacturers are going through the process of adapting their existing vans to electrification, and Stellantis are no different. But has the company managed to keep these strengths and produce a fully-electric van that appeals to its loyal customer base? Vanarama Van Expert Tom Roberts takes a look at the Peugeot E-Boxer to find out.

There’s a surprising amount of people who think that the Peugeot Boxer, Citroen Relay, and Fiat Ducato are basically the same large van with different badging and minor specification differences. That has traditionally been the case (although Fiat previously used its own engines) with Vauxhall joining the party in 2021 with the ‘new-look’ Movano (which used to be based on Renault’s Master platform). When it comes down to electrification though, Fiat has flown solo with the drivetrain for the e-Ducato being unique to the Italian van.

Let’s get one thing out in the open: the Peugeot e-Boxer isn’t a 100%-Peugeot-manufactured product. Unlike other manufacturers who have developed their electric vans in-house, Peugeot has solicited the services of UK-based company BEDEO to design and manufacture the electric drivetrain. In principle, there’s no issue with this, but I’d guess that this is an interim measure and Peugeot will eventually engineer their own EV tech. We may well have to wait for the arrival of a new Boxer sometime in the future before we see this, however.

What Drivetrain Does The Peugeot E-Boxer Have? 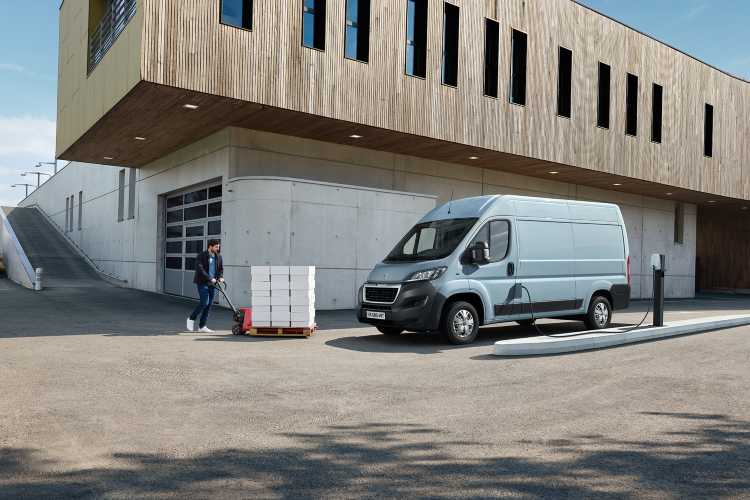 The Peugeot E-Boxer’s 90kW (equivalent to 120hp) electric motor produces a healthy 350Nm of torque, and is offered with a 75kWh battery pack in all but the L2 model that comes with the half size 37kWh version. This allows the van to retain a reasonable payload and certainly reduces the cost to the manufacturer.

What Is The Peugeot E-Boxer’s Range, Charging Times & Performance 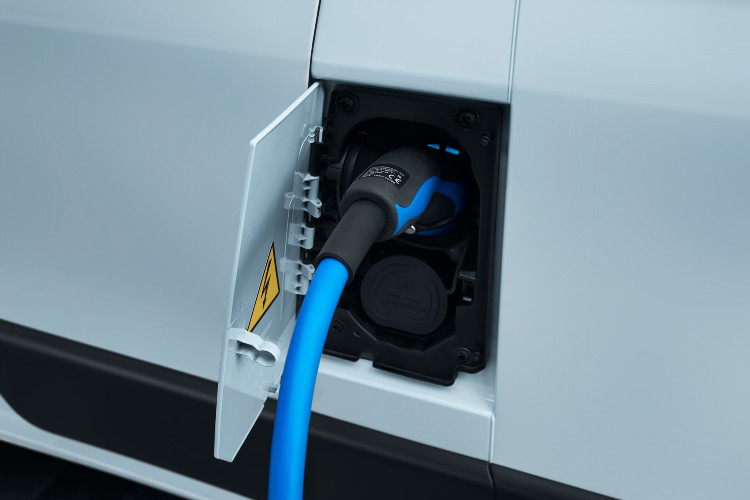 Under WLTP combined test conditions, the Peugeot e-Boxer was fitted with the larger battery pack and has a range between charges of up to 154 miles. The usual caveat applies here – these figures are primarily designed to allow you to compare one van against another, under real-world conditions you’re unlikely to get close to this mileage. This is reasonably competitive for a large electric van, but the same can’t be said for the L2 with the smaller battery – this can only manage 73 miles. Once this is reduced by normal, laden driving and the fact that you won’t want to run out of charge completely, there really isn’t much left for your daily operation.

The standard 7.4kWh wallbox charger at home or work will charge the 75kWh battery in 12 hours, and a 50kWh DC public chargepoint will get you to 80% of capacity in an hour. The charging point is behind a flap on the passenger side of the van. I’d have preferred this to have been situated at the front of the vehicle, because it’s much easier to connect to a charger when driving forwards into a public chargepoint bay, especially in a large van like the e-Boxer.

Performance is reasonable, but not earth shattering when carrying a full load. With some vans in this sector now having motors producing over 200hp, the Peugeot lacks ‘oomph’ in comparison. Top speed is limited to 75mph which, in fairness, is higher than some other electric vans.

What Body Styles & Weights Is The Peugeot E-Boxer Available In? 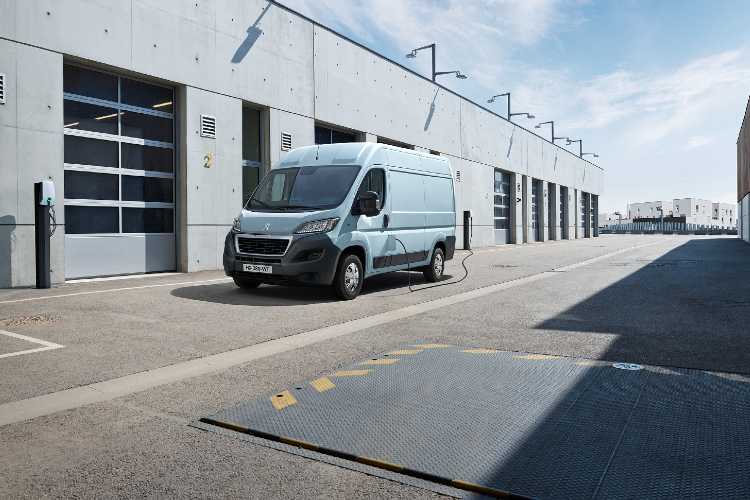 If you thought you’d be able to order any Boxer variant as an e-Boxer, you’d be wrong, but Peugeot is not alone in this strategy. Having said that, you can still order an e-Boxer in L2, L3 and L4 lengths - all with the H2 roof. These vans will give you a load length of 3120mm, 3705mm and 4070mm respectively, with corresponding load volumes of 11.5, 13 and 17 cubic metres. These are exactly the same figures as the diesel equivalents because the location of the battery packs has no impact on the van interior whatsoever.

We all know that the high weight of an electric van battery pack generally means that payloads will suffer in comparison to an equivalent diesel van. The Boxer has always had a strong ability for weight carrying - a reason why many customers choose to lease one for their business. While not class leading, the e-Boxer still manages to offer a reasonable payload of 1070 kg on the L2 version (due to that smaller battery pack), but this falls to 690kg on the L3 which is disappointing when the diesel version offers 1455kg!

Surprisingly, things are a little better on an alternative version of the L3 and the L4, both of which can carry 1100kgs. To get that payload, Peugeot markets these vans with a GVM of 4050kgs, rather than the usual 3500kgs. This would normally be bad news for 99.9% of van operators (with that higher GVM usually meaning a whole new set of licensing and operating requirements coming into play), but a government dispensation for alternatively-fuelled vans means that any under 4250kg GVM will be treated as being under 3500kgs – if that makes sense. You’ll just have to undertake a few hours of additional driver training.

And finally, can it tow? Sadly not – like some other electric vans, the e-Boxer has not been approved for towing a trailer.

What Specifications & Technology Does The Peugeot E-Boxer Offer Drivers? 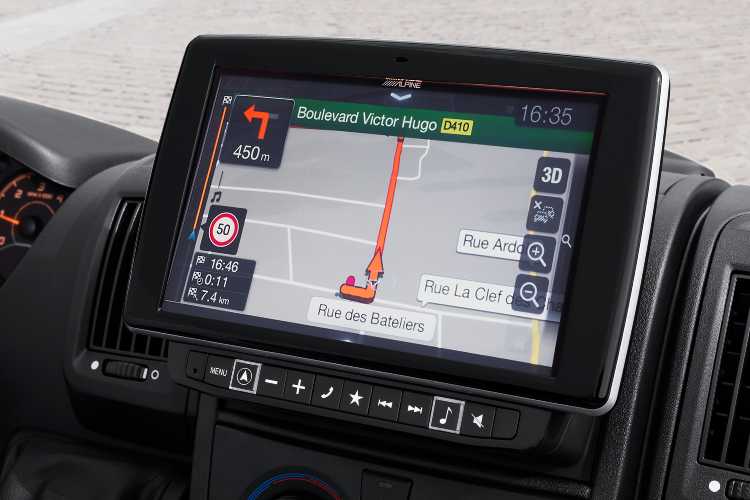 There’s just the 1 trim level available - Professional Pro, which is the mid level for the diesel Boxer range. There’s a good level of equipment including air conditioning, cruise control, rear parking sensors and a 5-inch touchscreen (which has a DAB radio and satellite navigation). Electric windows and door mirrors make life easier for the driver, and there’s a comprehensive ESC system, including hill start assist. An alarm system also helps keep the van and its contents secure. 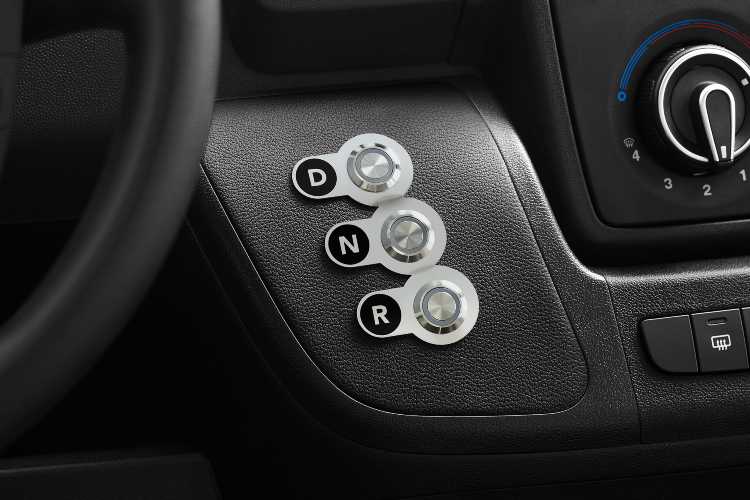 We’ve reviewed the Boxer previously, so we’re not going to go into too much detail around the cab area, but it’s important to know what’s different with the e-Boxer.

If a driver was not aware that this was a third-party conversion, there are some clues in the cab. There’s no gear lever (fair enough), but instead of a nice drive selection lever there are just 3 buttons in its place, marked D, N and R (for Drive, Neutral and Reverse). I have to be honest, these buttons look a bit like an afterthought and wouldn’t look out of place in an 1980s sci-fi film - they’re charming, but a lever would have been far more intuitive.

The instrument panel doesn’t contain the usual information relating to charge level, remaining distance or power usage. In fact, it’s the module used in the diesel van - the only difference being that the needles in the fuel and temperature gauges have been removed. The info you might be looking for is displayed in the (otherwise useless) rear view mirror – not necessarily a bad thing, but I would have preferred a dedicated display in the normal place, directly in front of the driver.

There’s also a ‘secondary heating control panel’ to the right of the steering wheel. This works in conjunction with the conventional, centrally-mounted heater controls. I still haven’t worked out how it all works, truth be told.

Fair play to Stellantis – rather than wait until they can develop and bring to market their own in-house electric van, they’re offering customers a battery-powered solution, which they no doubt hope will at least keep their loyal customer base happy (and maybe make them some new friends).

I like that there’s lots of spec and, despite its age, I still love the spacious cab. There’s a good choice of body sizes, although the small battery pack on the L2 will definitely put some potential customers off. I’m also impressed that Peugeot has taken advantage of the 4250kg GVM dispensation thing, because a number of other manufacturers have missed a trick there.

If I have to point out a couple of shortcomings - it’s not particularly powerful, and while the range on the larger battery is okay it’s not going to be practical for many, and the range in the L2 with the smaller battery gives this van very limited appeal. Payload at 3500kg GVM really isn’t great, but my biggest gripe is the evidence of the conversion in the cab - it’s not awful, just not what I’d expect from a quality brand like Peugeot.

Overall, there’s a lot to like and a few compromises to make, but it’s up there with the best of the large electric vans available right now - it’s definitely one to consider.

If you enjoyed this article, you might like this one about the best payloads available in electric vans. Or if you’re looking to lease a new electric van, head over to the Vanarama electric van special offer pages for the best leasing deals on all makes, models and sizes of electric van.