Why Lease the Ford Mustang Fastback? 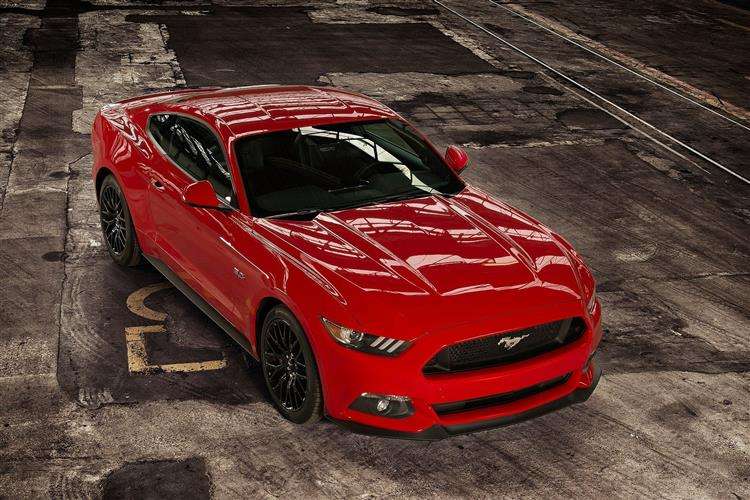 Prepare to re-set your views on sports coupe value for money. The sixth generation version of Ford's iconic Mustang gets proper right hand drive engineering and the choice of both coupe and Convertible bodystyles. It goes large on power too, bringing a super-sized 418PS powerplant in full-fat 5.0-litre V8 guise or one with 314PS in more economical 2.3-litre EcoBoost turbo form. With prices from around £30,000, similarly powerful European performance cars look hopelessly over-priced.

It's almost a national pastime to take pot shots at American sports coupes. The specialist magazines tend to dismiss them as crude, lumbering fuel hogs that couldn't get out of their own way if they tried. Historically, some of that has been down to jealousy. Traditionally after all, many US sportscars haven't been sold here in right-hand drive form, leaving the 'experts' yet another reason to bitterly snipe away at Corvettes, Camaros, Mustangs and Vipers to their hearts' content. And then this happened. Ford announced it was going to make the Mustang in right-hand drive and offer it for sale in the UK. Yep, in the same dealer where you can buy your Fiesta, you can now buy a five-litre V8 Mustang. Suddenly American sports coupes aren't stupid any longer. We suspect this one in particular might actually be quite wonderful.

We've yet to drive this car but on paper, the prospects look very promising. The Mustang offers a choice between two very different powerplants. While there will be many who don't see the point in choosing anything other than the 5.0-litre V8, Ford predicts a good take-up of the 2.3-litre Ecoboost turbo four. With UK pump prices being what they are, you can see the logic. It's not exactly limp-wristed either. With 314PS to call upon, it'll get to 62mph in a mere 5.5 seconds in six-speed manual guise. There's also a six-speed auto option. In isolation, that would be a very tempting proposition. Look at the ballistic 418PS V8 version though and your resolve might weaken. This demolishes the benchmark sprint in just 4.8 seconds and sounds immeasurably better. Early reports suggest that with less weight under the bonnet, the Ecoboost Mustang may actually handle a bit more crisply than the big-banger five-litre. The standard performance pack on European cars is supposed to firm up the ride, which some won't care for, but should also improve body control when the car's being driven hard. It's a fair compromise and you also get better brakes. There are three driving modes to choose from and stacks of grip. Of course, you can also disable the traction control if you'd rather demonstrate the effects of a surplus of unfettered power going to the rear wheels. The rear suspension is a multi-link affair, so you won't have to put up with ill-informed barbs about leaf springs and live axles.

Buyers choose between fixed-top or Convertible bodystyles and it's the coupe that most distinctively retains the characteristic fastback shape the Mustang has always had, a look which first debuted way back in 1965. Half a century later, this version of the car was unveiled in December 2014. It's still a fundamentally simple piece of styling, more modern and less aggressively surfaced than its predecessor, with flowing curves replacing wedgy angles. Its stance is more purposeful, with this sixth-generation car being lower and wider than before. It's still a fairly conservative all-steel unitary creation and it is a bit disappointing that it's slightly heavier than its predecessor. Still, Ford reckons that's purely down to higher equipment levels and better safety provision. Like for like, the latest Mustang would be slightly lighter than the car it replaced. The cabin isn't going to have the likes of Audi and Mercedes reaching for their drawing boards anytime soon, but a Mustang needs to feel like a Mustang; a proper blue-collar, hairy-chested people's sports car. No, that's not a cop-out: Ford had long and detailed discussions about this. Mustang buyers have an expectation of a certain straightforwardness about the car and Ford needed to guarantee this while at the same time improving interior quality. It actually strikes a nice balance. It's not chi chi but then neither does it feel like a holiday rental.

It doesn't seem so long ago that we were in rhapsodies about the way the 316PS BMW M135i had utterly changed the performance car sector, bringing all that power and a lively rear-wheel drive chassis to market for around £30,000. That all looks a bit silly in the light of the 418PS Mustang which retails at just £33,000. By contrast, a BMW M4 coupe, which is only marginally quicker and more powerful, starts at over £57,000. Somewhat amazingly, the Mustang V8 is within £500 of the price asked by BMW for its 286PS M3 Coupe way back in 1993! Go for the EcoBoost version and you can get 314PS for just £29,000. Whatever your engine choice, there's a £4,000 premium to pay if you want the Convertible bodystyle rather than the coupe. Rolling out the Mustang across a world stage is a first for Ford and the car - in both coupe and convertible forms - will sell in more than 100 markets. Equipment across all models includes 19-inch wheels, a performance brake package, automatic HID xenon headlamps, LED tail lamps and a rear diffuser. Further standard equipment includes dual-zone climate control, a nine-speaker sound system and SYNC 2 voice control connectivity with an eight-inch colour touch screen. Options include climate control seats and 19-inch alloy wheels with a Lustre Nickel finish. Ten exterior colour choices include exclusive Competition Orange and tri-coat Triple Yellow.

If you hold great store in miles per gallon figures, don't ever, ever take a test drive in the 5.0-litre V8 Mustang. It'll ruin you for the Ecoboost model. The 2.3-litre car returns an economy reading that is actually quite impressive for such a big, powerful, petrol-engined car, getting 35.3mpg in manual guise and a less rosy 28.5mpg if you choose the automatic, respective emissions figures being 179 and 228g/km. Choose that heavy hitting V8 instead though, and you'll emit 306g/km, while if you can get the fuel meter to average anything into the twenties, you have more restraint than we could manage. The 2.3-litre EcoBoost engine uses direct injection, variable cam timing and turbocharging to deliver its efficiency. A unique intake manifold and turbocharger housing enable it to make good on the performance Mustang drivers expect. The automatic transmission versions feature steering wheel-mounted shift paddles, which isn't really very 'Mustang': more Mondeo coupe...

The Ford Mustang might not seem an instant fit for a UK market where we like our sporty cars to be light and nimble, but it's hard to argue with the sort of value for money it delivers. We can't wait to get behind the wheel of one. After all, even the 2.3-litre EcoBoost version sounds as if it's going to be quick and this will be the car that will appeal to most UK buyers. The monster 5.0-litre V8 model seems a bit of an indulgence but it certainly has its own charisma and if that thirst for fuel can be offset by reserving it as a weekend toy, then it's not difficult to see this car chalking up a few orders, especially when Ford is asking around £33,000 for one. The EcoBoost version weighs in at just under £29,000 in coupe form, or £33,000 if you want the drop top. It's exceptional value for money for a 314PS sports car. By contrast, that sum wouldn't even get you into the base Audi A5 coupe with a weedy 170PS at its elbow. It's not sophisticated, it's not beautiful and it's not backwards about coming forwards. But it's a Mustang and the people who'll love the thing would have it no other way.