The Audi A5 is what happens when a German car company with an almost limitless budget decides to make a coupe that will suit just about everyone in every way – even if an actual coupe won’t really suit you. Yep. Not only is the A5 a ‘traditional’ 2-door coupe and cabriolet, but there’s a 5-door version too, with a massive hatchback which makes it both more practical than the A4 Saloon and (subjectively) better-looking too. In addition, the wide range of engines means it can be either supermini-economical or supercar-quick. 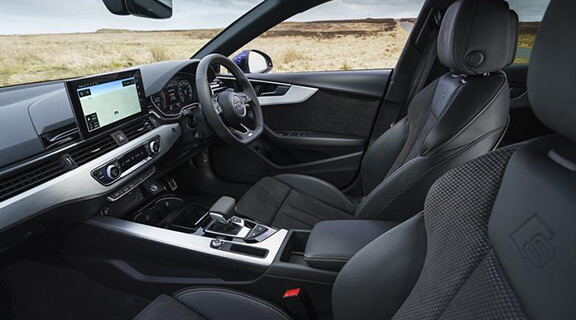 All the stuff we said there in the intro, mainly. It’s the breadth of choice that’s truly impressive about the A5, but also that every model, regardless of engine or spec or doors, is just fundamentally competent. You could argue that the A5 is so polished from top to bottom that it’s had all the character buffed out of it, if you want to, but other than that it’s pretty much flawless.

Every A5 has a great cabin including intuitive infotainment and a sense of solidity on par with Hulk-era Lou Ferrigno, and while the 5-door Sportback is the version for family buyers (more on which in a minute), even the 2-door has reasonable rear space and a sizeable boot. It even drives fairly well too, despite being front-wheel drive in a segment where power is normally sent to the rear wheels. We’re talking about the Mercedes-Benz C-Class Coupe and BMW 4 Series here, mainly.

Equally impressive is the engine range. You could argue it doesn’t feel cutting edge – there are no hybrid or full electric versions – but it does at least offer a remarkably wide scope within the boundaries of conventionality. Now’s not the time to explain Audi’s confusing engine naming system, but either a 35 or 45 TDI diesel will make 50mpg easily achievable. The 35, 40 and 45 TSI petrols are relatively economical too, and if you want pace, the diesel S5 gets to 62mph in 4.6 seconds and yet returns 40mpg. Want more pace? The 6-cylinder RS5 cracks 62mph in 3.9 seconds.

It’s not rear-wheel drive, but we don’t think that actually bothers the car-consuming public as much as it does car reviewers, mainly because it doesn’t really matter most of the time. Still, it’s a thing. The quattro 4-wheel-drive option doesn’t necessarily add any feel but does make for improved traction in wet or snowy weather.

The only actual dynamic issue the A5 seems to have – and we’re talking the ‘normal’ range here, rather than the S5 or RS5 high-performance models – is its automatic gearbox. That’s a shame because ‘Audi’ and ‘auto’ go together like ‘Grealish’ and ‘dive’. You probably do want an automatic in a car like this, really, but the A5’s S tronic option can really choke the drivetrain. Nothing truly ruinous, but the throttle response is quite lazy and it’s fairly irritating, when you’re approaching a junction or whatever, that there’s a brief pause before the car moves. It’s quick to shift between gears once on the move, but the throttle response in both petrol and diesel models feels like it’s been calibrated for emissions tests rather than intuitive driving. 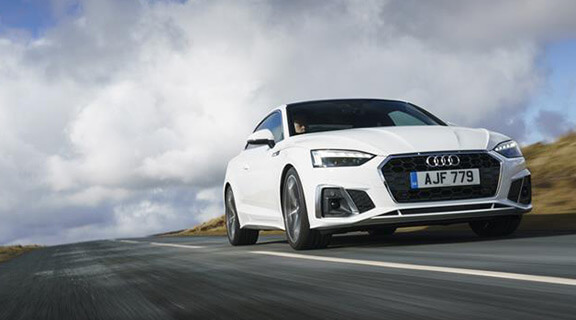 Most people seem to think that the A5 lags behind the other German coupes in pure dynamic terms, and while we tend to agree – especially with the automatic in mind – we’d also argue that the A5 is more than sharp enough for the majority of people during the majority of the time. That’s partly because any A5, be it a Coupe, Cabriolet or Sportback, has exceptional ergonomics. Close your eyes now and think of how you should sit in a coupe. You’re probably thinking pretty much what the A5 does: low-set seat, high-set steering wheel, high window line at your shoulder. It’s the archetypal coupe seating position.

There are few variables that affect how an A5 feels, which is natural in a car with such a spread of power and body styles. The Cabriolet is a little heavier and soggier than cars with a fixed roof, for instance, but the main variable is engine and trim. Choose an S line spec, for instance, and the lower, stiffer suspension has a harshening effect on the ride quality. A Sport car, on 18-inch standard wheels, is noticeably comfier. Away from that, the diesel engines seem to suffer most from the aforementioned pedal lag when pulling away, but the 2.0-litre TDI is a quiet engine once it’s warmed up and 50mpg is achievable. Either of the 2.0-litre TSI petrol engines are quick and generally more pleasant than the diesels – quieter and more eager to rev – but you’ll struggle to hit 30mpg in either.

On the dynamic stuff, again, you’ll get more outright fun from a rear-wheel-drive BMW 4 Series, but the A5 steers sharply, has a grippy front end, and it gives you feel – that sense of control that a good front-wheel-drive hatchback has. It feels like it’ll only really come unstuck if you’re basically driving like an inconsiderate citizen. Which you shouldn’t be, obviously.

The particular practicality of the A5 depends on the body style, of course. The soft-top model is the least practical, losing quite a lot of boot space to its roof storage needs, plus a not-inconsequential amount of headspace compared to the others with the roof up. Its boot space is decent, at 380 litres (the same volume you get in a VW Golf) but there’s no hatchback and a quite thin aperture, which makes loading bulkier things into the Cabriolet an awkward act. To a lesser extent the Coupe has a similar issue, albeit the boot opening is wider and outright volume larger, at 450 litres.

But by far the most practical version of the A5 is the Sportback, which not only has an extra pair of doors for rear passengers, but also has a longer wheelbase with all the extra 60mm given to leg space in the 2nd row. It’s a proper family car. Oh, and the boot is not only bigger still (480 litres) but it’s accessed by a massive fastback-style door, which makes dropping big stuff in – golf bags, say – as easy as dropping a 2-inch putt.

The dashboards and cabin layouts of all 3 versions are the same, built for style rather than outright practicality. You do get a couple of decent-sized cupholders though, and some space under the high-set centre console for little things.

This is a premium car, and priced as such, but the spread of engines means that most A5s offer reasonably low running costs. There’s no tax-busting hybrid version, sadly, but the 163hp 2.0-litre diesel has a 58.9mpg efficiency rating, meaning 50mpg in real life. And actually, even the S5, which has a 3.0-litre diesel with 341hp, returns 40.4mpg. A 40 TFSI 2.0-litre petrol model with an S tronic automatic gearbox – which is a great compromise between pace, refinement and economy – returns 40.9mpg officially, so you should see 30-35mpg in real life from it. Not bad for a 204hp car.

All those figures relate to the two-door Coupe, so you can expect a little degradation from equivalent Sportback or Cabriolet models because they’re a bit heavier. Lease rates on all versions are excellent, largely because the desirability of these things means residuals are high. You’re currently looking at around £450 per month for a well-specified 40 TFSI A5 Sportback

The A5 is a very safe car, which is another reason why a Sporback might be one of the best family runabouts on the market. In 2015, Euro NCAP rated the A4 and A5 a 5-star rating, including 89% and 87% scores for adult and child occupants respectively.

The C-Class comes as a Saloon, Estate, Coupe or Cabriolet. Its swoopy styling is arguably prettier than the A5’s but the Audi has a more solid-feeling cabin… and of course the Sportback’s massive hatchback.

Controversially styled but the 4 Series has all the practicality of the A5 and is more engaging to drive with it.

Didn’t expect a Kia here? Yep. The Stinger is a fantastic A5 Sportback rival: big, rare, practical, well equipped and lovely to drive. What’s stopping you?

Three Things To Remember About The Audi A5: