It’s the two-door BMW that you probably actually want instead of the 3 Series that your left brain (or your family, more likely) is making you choose. Formerly known as the 3 Series Coupe until BMW began using the number 4 in 2014, this latest version of the 4 Series is so much more than a saloon minus two doors. As compared to the 3 Series, the 4 has a wider track, stiffer chassis, retuned suspension and steering and is, more so than ever before, engineered as the choice of the ‘driver’.

But we can’t begin to talk about this particular BMW coupe without first considering the big dollop of Marmite that BMW has chosen to smear across the front end. We’re talking, of course, about the 4 Series’ ABSOLUTELY MASSIVE GRILLE. It’s fair to say it’s divisive. Look beyond it, though, and you’ll find it’s attached to a car that sets a new standard for mid-sized coupes. From the base 420i upwards the 4 Series is brilliant to drive, a joy to sit in and about as practical as a car of this style could possibly be.

The stuff we just said, basically. You get used to the grille too. We actually like it. But beyond the subjectivity of appearances, the 4 Series is just a wonderfully well-rounded coupe. It’s a car that, regardless of engine choice, is capable of making ordinary journeys feel extraordinary. The returns improve with power, of course, but a basic 420i or 420d will give you all the rear-wheel drive handling fun you could possibly want, while being a very comfortable and relaxing long-distance car during those times you need that instead.

The interior feels bombproof, even down to slush moulded (soft touch) door pockets, and although the dashboard might look a little button-heavy in pictures, it feels every bit the modern cockpit in real life. Those buttons, alongside some very intuitive infotainment software, help make this a largely frustration-free environment to command, and one that’s more spacious than you might expect. The two rear seats accommodate a couple of six-foot adults. Just. 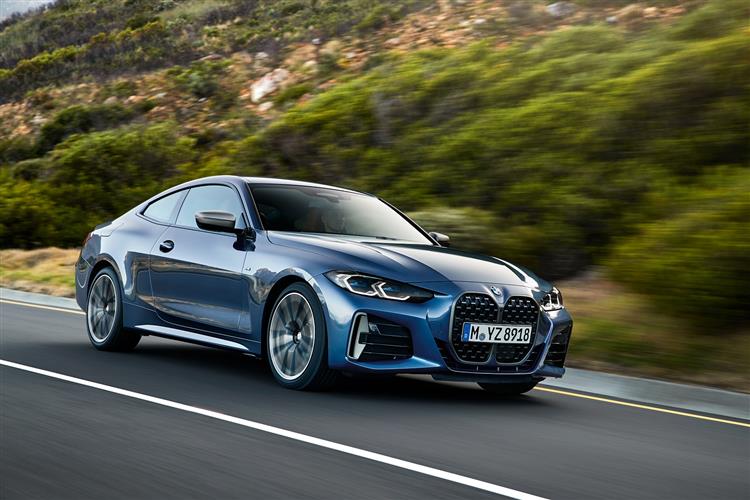 We’ll bypass the obvious grille chat and go straight to the other side of the car. BMW’s decision to stick with tradition and make the 4 Series a two-door, rather than giving it a big hatchback (technically making it three), has significantly hindered practicality. We’ll talk more about that a few paragraphs down.

We’d also suggest that if it’s pure long-distance comfort you’re after, then the Audi A5 Coupe and the two-door versions of the Mercedes C-Class or E-Class all ride with a little more primary softness than the 4 Series does. BMW has made this a ‘driver’s car’, and while it’s not by any stretch uncomfortable, it’s a little less cushioned than it could be. You can, however, obtain adaptive damping by leasing your 4 Series in M Sport Pro Edition specification, whose Comfort setting emolliates things a little.

Brilliant. The 4 Series offers up just about the most engaging driving experience you could hope for this side of a two-door Porsche. The 4 Series’ job is, and always has been, to balance day-to-day comfort and usability with rewarding dynamics – that’s the job of any coupe, really – and so we’re not talking about a razor sharp sportscar here. But this 4 Series feels like it’s maximised its strengths at both ends of the scale. It’s all at once a leisurely grand tourer and a quick-witted sportscar.

Fundamentally the 4 Series has that ‘pushed from the back’ feel that you can only achieve with rear-wheel drive, which leaves the front axle unencumbered to steer, giving the nose a sense of lightness that it shouldn’t really have given there’s a whopping great engine block hovering over it.

On which, the engine range is fantastic, largely because the base stuff is so good. You expect the six-cylinder 3.0-litre in the M440i to be fast and loud, but arguably more impressive is the dual nature of the 2.0-litre turbo petrol in the base 420i, which is whisper quiet at low revs, punchy in the mid-range and yet a joy to push hard. Same goes for the 420d diesel, which far from being recommendable only by virtue of being the most economical, is genuinely pleasant. Quiet, stronger at low revs than the 420i, and a real world 50mpg easily achievable.

The twin-clutch automatic gearbox too, standard across the range, does impressive work. It shifts through all eight of its ratios virtually imperceptibly, never bursting the refinement bubble by letting you know what it’s doing. And in every other area of NVH (noise, vibration, harshness) the 4 Series is as executive as it should be.

Not very, albeit you should really be expecting that and, in fact, the 4 Series probably goes a little further than it needs to. In plain capacity terms the boot is not far off what you’d expect from a family crossover, at 440 litres, but in reality it’s a long, flat space that looks like it was designed specifically to adhere to the ‘twin golf bags’ cliché.

The rear seats drop with a pair of conveniently placed handles near the tailgate, but the thinness of the aperture and the fixed parcel shelf mean this is not very flexible. Again, a hatchback of the type that the Audi A5 Sportback has would be a huge lift, figuratively and literally. 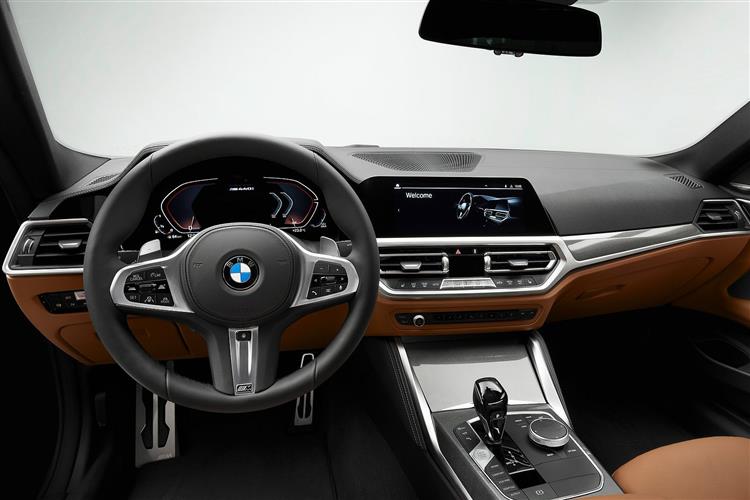 The cabin makes up for any outright practicality deficiencies though. It’s ergonomically perfect, offering telescopic wheel adjustment and that archetypal low-slung driving position befitting a proper sportscar. There’s loads of front headroom and more rear space in all directions than you probably expect, the only real suffering coming with getting in and out of the thing across the front seats. But that’s just coupes for you.

And all that said, the inevitable 4 Series Gran Coupe will solve all this by providing two extra doors, additional rear space, more boot space and a hatchback. All at the expense of the two-door coupe styling though, obviously.

Nobody’s pretending that this is a cheap car, but in fairness gone are the days when your basic BMW would include doors and a steering wheel on an equipment list that could be written in full on the lid of a packet of Benson & Hedges. M Sport being the base model, all cars come with 18-inch alloys, leather upholstery, three-zone climate control, LED headlamps, a 12-inch digital instrument display (a very good, clear setup at that), touchscreen infotainment (ditto), cruise control and parking sensors all round.

What hasn’t changed over time is the opportunity to spec your 4 Series to the hilt with packs, and while they all improve the car (obviously) we’d say that the main benefits come in the shape of Pro Package. Include that and your 4 Series will look better thanks to grille-softening black trim, ride better thanks to adaptive damping, and sound better thanks to noise augmentation. Among other stuff.

Fuel economy is more than reasonable across the board, with the 57.6pmg 420d leading the way, partly because it includes a 48v Mild Hybrid system. The 420i returns 42.2mpg and the 430i, which uses the same basic engine tuned up from 184hp to 258bhp, does 39.8mpg. Not bad for a thing capable of 5.8 seconds to 62mph. The M440i, which is xDrive only, returns 36.7mpg from a six-cylinder 3.0-litre turbo engine which, again, is reasonable considering its 374hp output and stonking pace.

Every 4 Series comes with variable steering and it’s one of the best systems on the market, basically adjusting the gearing of the rack so that at lower speed it takes a little more movement to turn the car, progressively sharpening up at higher speed. The result is that the 4 Series really needs very little input to get the front end shifting at anything over town speed, which can at first make the car feel twitchy, even. It soon becomes second nature though, and because the 4 Series has lots of grip fundamentally, and is rear-drive (or rear-biased with xDrive), it suits the car perfectly.

xDrive is BMW’s four-wheel drive system and is optional with the 420d or standard with the M440i, sending some drive to the front axle for additional grip. Under normal circumstances more drive goes to the rear, so it doesn’t upset the fundamental handling balance of the car, although we’d suggest that if you’re looking for more grip across ice and snow then a set of winter tyres on a rear-wheel drive car will make a more noticeable difference.

Older than the 4 Series and not as sharp to drive nor as modern inside, the Audi A5 is just as solid and a little more comfortable.

The Guilia is easier on rear passengers and just as head turning, and without resorting to shouty front end styling.

"It’s a car that, regardless of engine choice, is capable of making ordinary journeys feel extraordinary."

Three Things To Remember About The BMW 4 Series: