A car whose arrival means that, in a single ‘badge’ model family for BMW, there are now 3 different platforms used. Yes, this is the new 2 Series Coupe, which will ultimately begat a Convertible soft-top spin-off – but the Coupe joins the 2 Series Gran Coupe and 2 Series Active Tourer vehicles already on sale. The thing is, the Gran Coupe sits on one chassis, the Active Tourer on another and this Coupe on yet another. In this instance, it’s the CLAR rear-wheel-drive platform used by the larger 3 and 4 Series models, which means the Coupe is not front-driven like its 2 Series relations.

That’s true for the entire Coupe range, apart from when it has xDrive AWD, like this particular car. While more engines and versions will come onstream soon, at launch there’s a trio of 4-cylinder, rear-wheel-drive models – 2 petrols, called the 220i and 230i, and 1 diesel, the 220d – and then the M240i xDrive range-topper. This thing is powered by a 3.0-litre turbocharged inline-6 petrol engine, driving all 4 wheels through an 8-speed Steptronic Sport gearbox. With a thumping 374hp and 500Nm to play with, 0-62mph takes just 4.3 seconds and the top speed has to be limited to 155mph. For reference, the next-most-powerful model in the line-up, the 230i, has 245hp, and both the 220-spec cars have less than 200hp irrespective of their fuel type, while the previous-generation M2 – a full-on M car, remember – had 370hp and 465Nm, and was no faster than this M240i. That’s astonishing.

Interestingly, it’s not only the chassis which is different on the 2 Series Coupe, when compared to its newly released 2 Series Active Tourer MPV stablemate. Whereas that more practical car is on the FAAR platform and has the OS8 infotainment, which means it no longer has an iDrive controller in the cabin, the Coupe is on the same underpinnings as the 3 Series and 4 Series – resulting in both older OS7 infotainment and an iDrive controller. This might displease technophiles who want the latest in cutting-edge gadgetry, but at the same time it will probably delight those who love good ergonomics, in that much of what you control in the M240i is done via the use of intuitive dials and buttons. We’ll come onto interior practicality later in the piece.

Similarly, while a BMW 220i Active Tourer is a 1.5-litre 3-cylinder mild-hybrid (MHEV) petrol with 170hp, the BMW 220i Coupe is a 2.0-litre 4-cylinder non-hybrid petrol with 184hp (NB: the only 48-volt MHEV in the Coupe’s range is the diesel-powered 220d). Understanding BMW’s badge-numbering system has always been a bit of an arcane art, as things marked up as ‘20’ are not always 2.0-litre engines and so on, but we think this is the first time in memory that 2 otherwise identically named cars in a single model family have got different capacity and configuration engines. 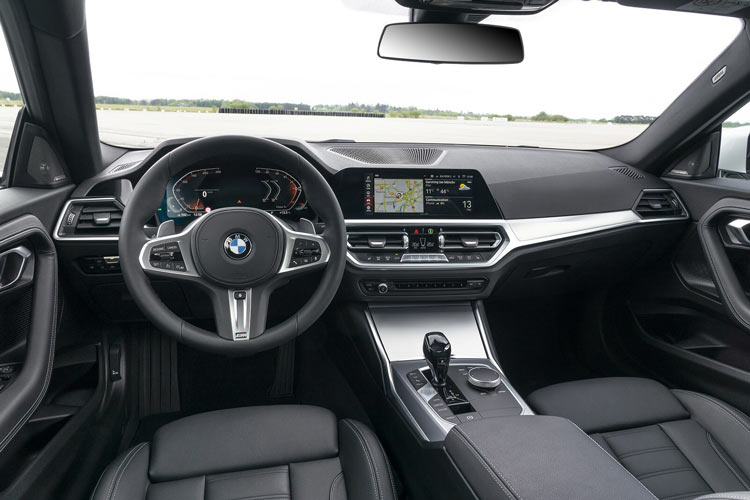 The interior might not feature the most up-to-date BMW human-machine interface (HMI) technology which is currently available, but it is otherwise an ergonomic and textural delight. You sit down low and ensconced in the driver’s seat, with simple-to-understand and carefully thought-out switchgear clustered around you. Furthermore, the digital displays look good and crisp, although there’s still a back-to-front rev counter in the instrument cluster; that’s so 2000s Aston Martin, daaahling. Anyway, with the hyper-intuitive iDrive controller at hand, as well as beautiful fixtures and fittings, the Coupe’s interior feels like a suitably upmarket and inviting place to spend some time. 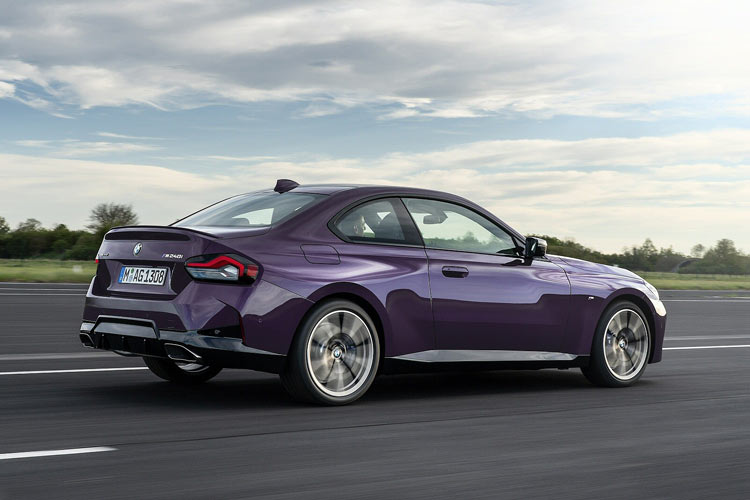 We’re going to say the styling, but this is a bit of a difficult area to address – as, among some of BMW’s latest, er… challenging designs, the 2 Series Coupe is one of the better visual efforts. It doesn’t have whopping great kidney grilles up front, for a start, and the ‘single-eye’ headlights are a direct nod back to the ’02 line of the 1960s and ‘70s, which is a lovely touch. And it also means that, unlike its quad-lighted relations, the 2 Series Coupe stands out; you’re not going to mistake one of these for a 4 Series when it’s racing up to your rear bumper on the motorway, that’s for sure.

That said, the long wheelbase of CLAR and some rather edgy design lines means the 2 Coupe is not what we’d call an out-and-out looker. It can appear awkwardly proportioned from certain angles and you definitely need a decent stretch of time to appreciate the metalwork in person, in order to make a full decision either way as to whether you like it or not. It’s one of those cars which doesn’t really photograph well, but even accepting that fact, we’re sure there are plenty of folk who will not find the 2 Series Coupe’s aesthetics to their taste once they’ve seen it in the metal. We’d counter by saying it’s a long, long, LONG way in advance of the 2 Series Gran Coupe’s gawky appearance, mind.

Say what you like about the out-of-control German horsepower war giving us a 374hp 2 Series that isn’t a ‘full’ M2, or about the fact that you’ll be spending getting on 50 grand to sit in this Beemer; the truth is the M240i is an unalloyed joy to drive. It represents BMW back to its dynamic best, giving us a relatively compact, light coupe that feels inherently rear-biased (despite the xDrive AWD) and agile when you want it to be, and relaxed and refined when you don’t.

The good work starts with multimode steering that’s never overtly artificial in its weight of responses and not controlled with a wheel that has a comically fat rim. This allows you, as the driver, to get some road feel from the M240i’s helm, which is a hugely positive attribute that cements an instant rapport between the machine and its human occupant. Allied to that, the brakes on the M240i are powerful and beautifully progressive in their actions, and the company has been honing automatic gearboxes to the point of perfection for years and years now, so the fact there is no manual transmission option in the 2 Series Coupe range is no hardship at all.

However, what’s most amazing about the M240i is that it uses pretty much all the same hardware as the larger M340i saloon… and yet it’s far more engaging and entertaining to drive. The turbocharged 3.0-litre engine, for starters, sounds more raucous and snarling in the M240i than we remember it in the M340i, while it flings the 2 Series up the road at a terrific pace if you give the 6-cylinder unit its head. Traction is also not an issue, thanks to the xDrive technology, but put the car into its sportier settings and it definitely favours sending most of the torque to the rear axle – which becomes playful and loose, but in a good way, on the right roads. This is no boringly inert 4-wheel-driver at all. Indeed, it might be one of the best BMW coupes we’ve sampled in years.

Thankfully, when you’re not driving like you’re 21 again, the M240i is stupendously well-resolved as a cruiser. You don’t have to pay for its superb cornering abilities with a sharp-edged ride or excessive tyre roar on poorer road surfaces, because when it is throttled back this compact BMW feels like a much grander car than its market positioning dictates. It’s remarkably smooth and it’s near-silent at lower revs, and it’s therefore a comprehensively exceptional all-round display from the M240i – whether you’re pottering around town, making progress on a quiet back road or simply covering the long miles on a motorway. 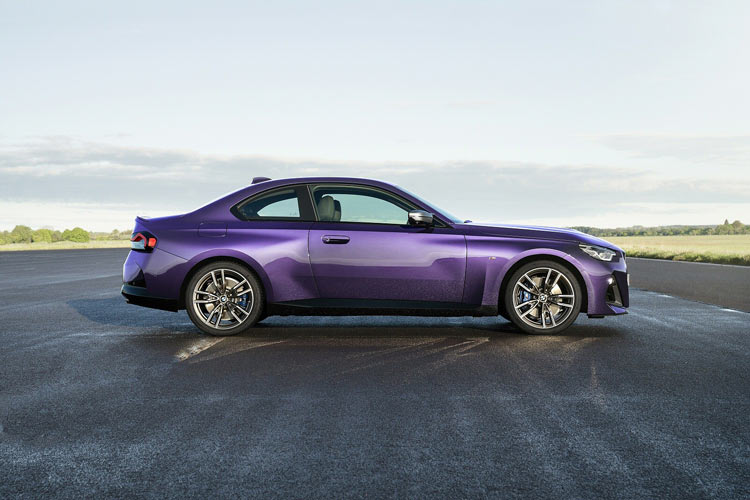 Bear in mind that the 2 Series Coupe is a sporty 2-door machine with a 2+2 interior seating configuration, and you realise it’s actually surprisingly practical. As its wheelbase has been stretched by 51mm over its predecessor, to 2741mm overall, the rear seats will take a couple of adults in reasonable comfort – perhaps not if they’re as tall as a couple of decent basketball centres, but certainly able to accommodate people of average height. Furthermore, the M240i has a 390-litre boot, which is 20 litres bigger than the old model’s cargo bay and pretty damned sizeable for a car of this class; some saloons don’t have boots as big as this.

Elsewhere, the retention of the iDrive controller and physical climate controls make the M240i a doddle to interact with when you’re on the move, so there’s a beneficial safety aspect to the ergonomic correctness of the BMW.

That means you should be able to get a 2 Series Coupe out of the door for about the list prices quoted above, which will help keep monthly leasing costs as reasonable as they possibly can be – and the standard equipment is generous, with M Sport cars fitted with 18-inch alloy wheels, Sports seats in part-Alcantara upholstery, the BMW Live Cockpit Professional HMI (comprising the 12.3-inch instrument cluster and 10.25-inch infotainment screen), Variable Sport steering, heated front seats, 3-zone climate control, cruise control and ambient interior lighting, among more. The M240i gains extras like 19-inch M alloys in Cerium Grey, further Cerium Grey exterior detailing flourishes, electric memory seats with Vernasca leather upholstery, M Sport brakes, an M Sport differential, an M Sport spoiler and M Sport seatbelts.

In terms of the importance of the 2 Series Coupe, in an era dominated by crossovers and SUVs, and its model mix over here, the UK is a key market for this car. The largest market will be the USA, taking 28% of the sales, but the UK is 2nd with 21% - outstripping the 2 Series’ homeland of Germany, with 12% - and then every other country will take less than 10% apiece. BMW expects about 1-in-4 UK 2 Series Coupe models to be the M240i flagship, with the remainder split 60% to the 220i, 9% to the 230i and then 7% to the 220d. 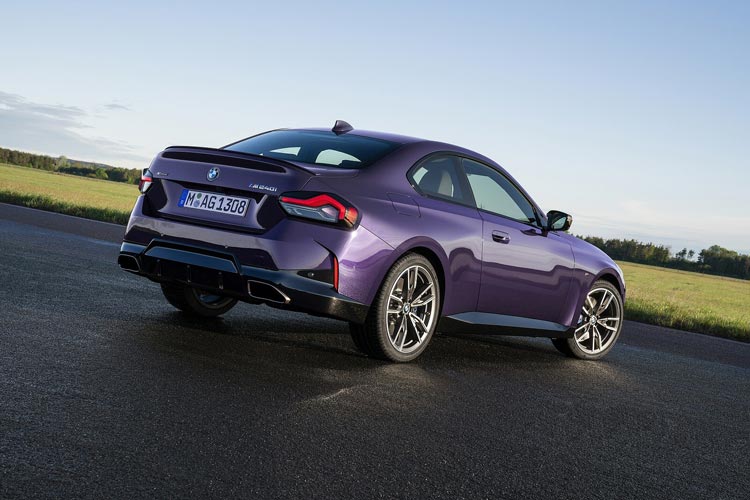 There’s a purple colour available for the M240i and its name is Thundernight metallic. Which is possibly the best name ever for a car colour, in our opinion, and we’re not prepared to accept any further questions on this matter at this time.

A much lighter, more delicate experience and it’s sublime – but the A110 is a far less practical 2-seater.

Mid-engined brilliance from the Stuttgart company, although again it’s a 2-seater only – unlike the 2+2 BMW.

Fantastic to drive, thanks to a tie-up with none other than BMW, the Supra is a ‘90s sports coupe revived.

3 Things To Remember About The BMW 2 Series Coupe:

Seriously fast in a straight line

Just as much fun in the corners

Is on a different platform to other 2 Series models

Which Cars Are The Most Fun To Drive?
Our pick of the 10 most fun cars to drive in 2021...Read More
Car Body Types: The Ultimate Guide
Today we have a wide variety of car styles, but what do they all mean and which is best for you?Read Guide
BMW 2 Series Gran Coupe Review
It's very easy to recommend the BMW 2 Series Gran Coupe, find out why...Read Review