No 2 cars reflect the remarkable rise of both Kia and Hyundai better than the Sportage and the Tucson crossover SUVs. Go back to the mid-2000s and both cars were cheap but not-very-cheerful utility vehicles with thirsty engines, ropey interior plastics and even ropier refinement. Today though, the pair of them are brilliant family crossovers with genuinely class-leading qualities.

The Sportage and Tucson are actually very closely related cars, because Kia and Hyundai work together to develop a shared chassis, engines, gearboxes and so on. But that’s not to say they’re exactly the same. On the contrary, in some ways they feel as distinct as they look. So, let’s look at the differences and figure out which one you should lease.

What Are The Main Differences? 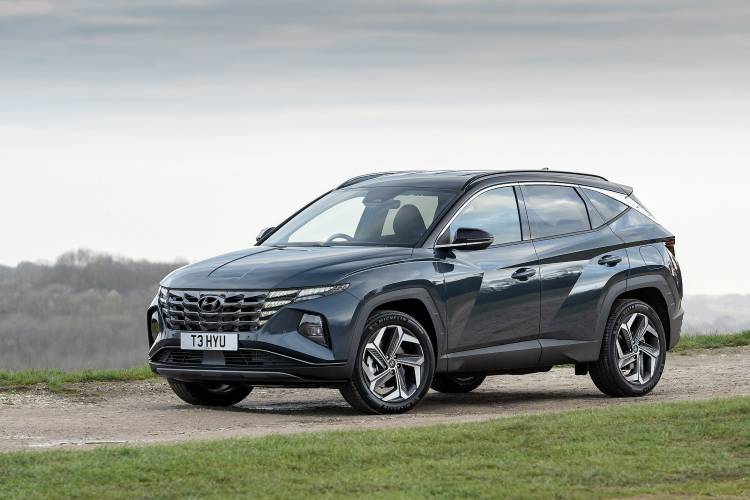 While it’s quite difficult to tell some of the Volkswagen Group crossovers apart from certain angles (VW Tiguan, SEAT Ateca, Skoda Kodiaq), there’s no risk of that here. The Sportage and Tucson are both very striking crossovers but in very different ways. Kia and Hyundai are both equally guilty of using, ahem, interesting phrases to describe their own ‘design language’ and they’ve pulled out a couple of blinders for their crossovers. See if you can guess which one of the following applies to which car:

Yes. Interesting. So, Sensuous Sportiness is Hyundai’s and Opposites United is Kia’s. Back in the real world, the Tucson is distinguished by its striking ‘parametric jewel pattern grille’ (again, Hyundai’s words) which matches the headlamps to the pattern of the grille and was actually very difficult to engineer for various technical reasons. The Tucson is generally the brasher of the 2 all the way around the thing, with its flared and asymmetrical wheel arches and myriad body creases. By contrast, the Sportage is all very restrained, a much more conservative design from front to back.

Are The Interiors Just As Different? 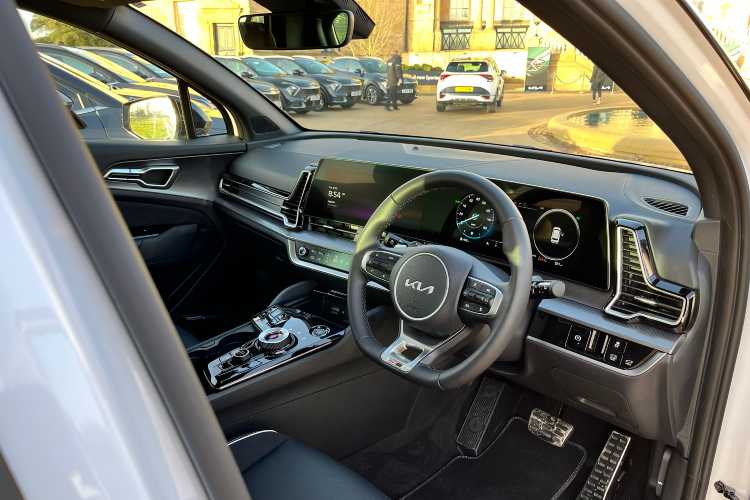 Yes, but in the opposite sort of way. They’re opposites united, you might say. The Tucson’s interior design is far less ostentatious than the exterior. It too is multi-layered and interesting, separating the front of the cabin into 2 ‘cockpits’ for driver and passenger, but it doesn’t have quite the high-tech classiness of the Sportage, which is dominated by a panoramic twin screen display sitting above a fancy digital touchpad for the aircon and such. It’s both modern and intuitive - albeit the twin displays aren’t standard on a base level car, which is a shame. 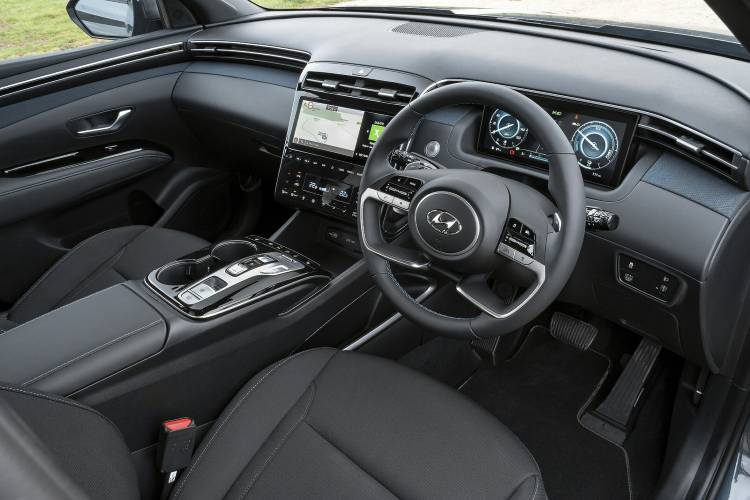 Because the Tucson and Sportage share a chassis and are dimensionally very similar, including an identical wheelbase, they both offer the same sort of interior space. Which is to say plenty. The Tucson is fractionally higher which means it’s got a little more rear headroom, but the pair of them offer generous room for 5 - they’re 2 of the most spacious family crossovers in the class

Which Is The Most Practical? 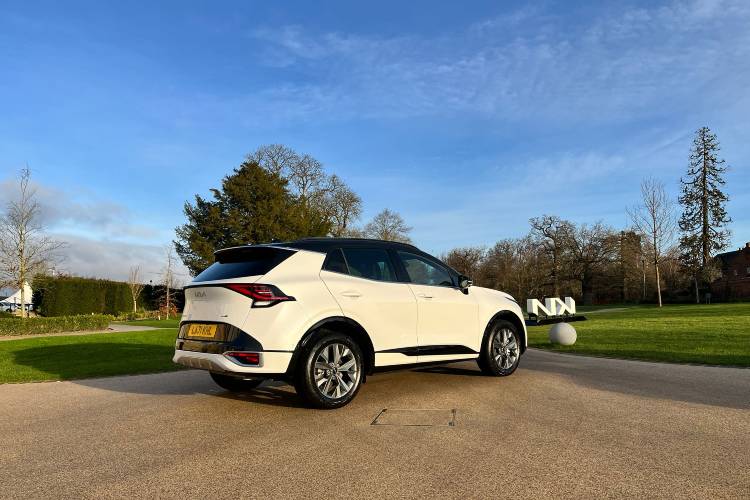 Not much to choose between the 2 of them, but it’s worth saying that in both cases the amount of boot space you get is determined by the drivetrain they’re packing; both are available as hybrids, which reduces the boot volume to accommodate the additional electric bits. So a standard petrol engined Sportage has a 591-litre boot, reduced by a mere 4 litres in a hybrid but by 51 litres in a plug-in hybrid. Still, by comparison a Volkswagen Golf has a 380-litre boot, so in any event you’re looking at a large luggage space. The Tucson fares better still, with a 620-litre space at its biggest, shrinking to 558 litres in the plug-in hybrid. Both have maximum luggage capacities around the 1800-litre mark if you drop the rear seats.

Both come with similar cabin practicality features, including 40/20/40 split-folding rear benches, twin boot floor setups that allow you to raise the loading bay and hide things underneath, and the option of an electric tailgate - that’s helpful because they’re big and quite heavy. It’s hard to separate the 2 in terms of the basic up-front cabin storage, both coming with a fairly large box in the centre console, quite shallow door pockets and a sizeable glove box. However, for rear passengers the Sportage wins because it’s got USB sockets built into the side of the front seats, and a pair of massive hooks built into the front headrests for bags or coats. Incidentally it also has the cleverest cupholders, which can retract in order to make the space useful for general storage.

What Are My Engine Options in Both? 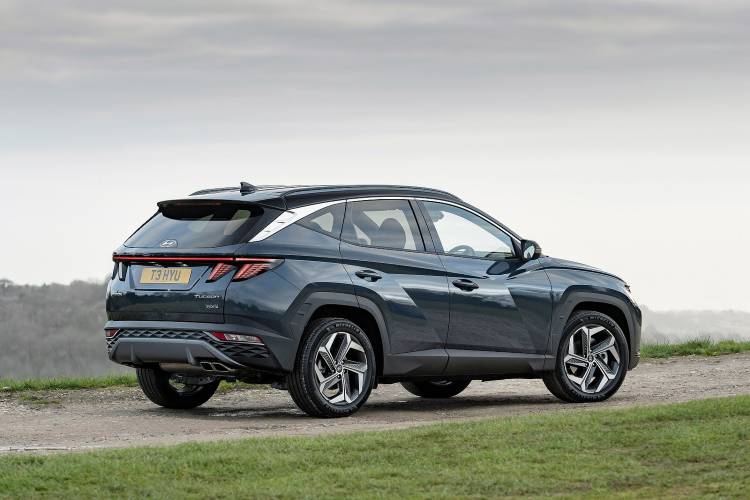 A significant part of the co-development of these cars was their drivetrains, which means they share engines and gearboxes, albeit there are a couple of differences.

Both come with a broad drivetrain choice, although the Tucson isn’t available with a diesel, while the Sportage is for now; Hyundai launched the Tucson with a diesel option but soon dropped it, and Kia is likely to do the same thing. Kia’s 134hp 1.6 CRDi diesel rates at 54mpg and is an efficient and relatively refined option for those doing a lot of motorway miles. Every other choice in either a Sportage or Tucson is based on a 1.6-litre petrol engine with 150hp in its base form and returning 42mpg; Hyundai offers a 180hp version in sportier N Line versions of the Tucson.

There are full hybrid versions that improve power (230hp) and efficiency (50mpg), while a 265hp plug-in hybrid has a bigger battery, and therefore a significant amount of electric-only range (up to 38 miles) and a 200mpg+ claimed fuel economy rating. Both cars can be optioned with a 4-wheel drive system and an automatic gearbox. Lots of choice, then, and each one more focussed on fuel economy than outright performance, which suits their purpose as family cars.

Which Is The Best Equipped? 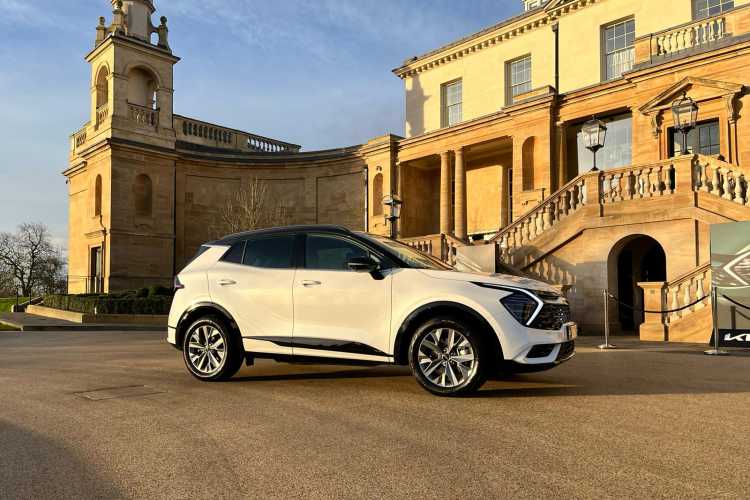 They share very similar spec sheets although some differences do become apparent further up the respective ranges. The Kia has a starting price a couple of thousand lower than the Tucson’s £29,000 entry point, but you won’t see much difference in the leasing rates, and actually that little price bump is reflected in the spec sheet. In the Tucson, a base SE Connect car comes with twin 10-inch digital displays, whereas a basic ‘2’ specification Sportage has analogue instruments and a smaller central touchscreen. Other than that you’re looking at 2 well equipped cars, with alloy wheels, smartphone mirroring, dual zone climate control, cruise control and a rear parking camera all standard.

Both come with sporty-type trim levels further up the range - ‘N Line’ in the Tucson and ‘GT Line’ for the Sportage - but in both cases the changes are mainly visual rather than adding any additional driving excitement (aside from the Tucson N Line being available with a slightly higher powered engine). These are the models that offer most bang for your buck: bigger wheels, keyless entry, suede and leather upholstery, LED highlights. Again, though, the Hyundai offers a little more, coming with heated front seats as well. That said, at the top of the range the Kia feels the more techy, owing to its clever haptic infotainment control panel and a feature that allows you to remotely drive the car forward out of a parking space using the key.

Safety kit is reassuringly extensive in both cars, and although the Sportage hasn’t been crash tested by Euro NCAP yet, the Tucson has a 5-star rating and it’s almost certain that the Kia will receive the same score.

Which Is The Best To Drive? 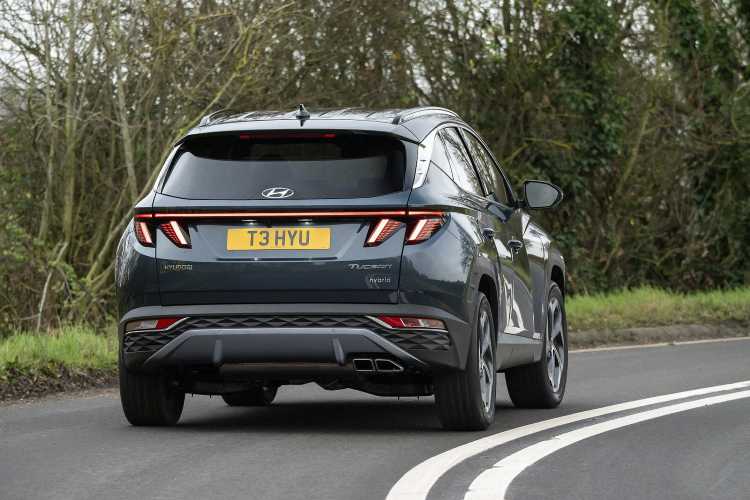 In basic character terms they are, of course, quite similar. But that’s a good thing because that character is truly brilliant, and class-leading in many ways. In essence, the Tucson and the Sportage are spacious, comfortable, highly refined and generally feel like cars from a class up. You sit tall in both, with a great view of the road ahead.

You’ll get a more involving driving experience from a Peugeot 3008 or a Ford Kuga, but neither of those cars have the calming refinement of the Korean crossovers. The only real weak point, arguably, is the 1.6-litre petrol engine and automatic gearbox combination. The engine can feel a little coarse when pressed hard, like it’s straining to cope with the sheer weight it’s pulling, although it is very quiet at town speed. The gearbox is a little hesitant at times, even more so in the hybrids while the system works out what combination of electric and petrol power it’s using. No big deal though, because it’s generally smooth and in the cars it’s no less fuel efficient than a manual gearbox would be. Efficiency will drop a little if you choose a 4-wheel drive version, so ask yourself if you really need the extra traction; 4-wheel drive doesn’t really amend or improve the fundamental driving experience in a way you’ll notice day-to-day.

We’d say that the Kia feels the more upmarket of the two in terms of the way it rides over the road. It’s a little softer, a little more comfortable, the steering rack a little lighter. In that context the Tucson has a slightly heftier feel, a little less prone to body roll when cornering, and a little more feel from the road up through the tyres. There’s nothing in it that disrupts basic comfort, but it’s probably fair to say that if you’re looking for a slightly more absorbing driving experience, the Tucson is the one to go for - especially in N Line trim.

Kia and Hyundai both offer excellent warranties, with the Sportage boasting 7-year, 100,000-mile terms and the Tucson 5 years and unlimited mileage. Both of these cars are too new to paint a true picture of long term reliability, but things bode well: in a wide-ranging 2021 reliability survey covering all manufacturers, the Hyundai Kona came out on top, and the last generation Kia Sportage came in 9th.

Hyundai Tucson PHEV Review
Is it madness to suggest that a Hyundai could possibly tempt you out of a BMW X3? This Tucson suggests it isn't as Matt Robinson puts this crossover-SUV through the Vanarama road test.Read Review
Hyundai Tucson Colour Guide
Here’s a detailed look at the paint palette available on the Hyundai Tucson 5-seater midsized crossover-SUV, which we hope will help you choose your perfect new car colour.Read Guide
Kia Sportage v Nissan Qashqai
A heavyweight battle here, as 2 of the most sought-after midsized crossovers go head-to-head as we pit the Kia Sportage against that juggernaut of the showrooms, the Nissan Qashqai.Read More
Kia Sorento PHEV Review
Get the inside scoop on Kia's newest version of this super 7-seater, as Matt Robinson takes the Sorento for a spin...Read Review