The Polestar 2 is the first crack at a fully electric car from a new eco-conscious brand, brought to you by Volvo. A few things to unpack here. Firstly…yep, there is of course a Polestar 1, but it’s a two-door, 600hp petrol-electric plug-in hybrid with a tiny boot and a £140,000 list price. Uh huh. The 2 here is Polestar’s crack at…you’ve guessed it…Tesla’s market share. It’s a thing you might want to lease instead of a Model 3, or even one of the electric SUVs that Audi) and Mercedes) is doing now, namely Q4 E-Tron or EQA.

Basically think of a modern Volvo saloon with 10% more tech, mystique and physical height, add an electric drivetrain, and you’ve pretty much landed at the Polestar 2. 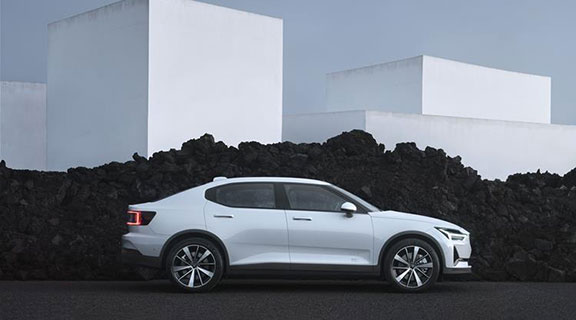 Before becoming Volvo’s Extinction Rebellion arm, Polestar was a racing team that worked with Volvo to do a few fast editions of its production cars, and which Volvo eventually acquired. Regardless of quite when the shift to a vegan-friendly, electric-focussed brand occurred, those origins mean that Polestar cars also have to be quick and interesting in a way that it’s difficult for a run-of-the-mill Volvo to be.

Therefore, even a basic Polestar 2 has a 221hp electric motor and a 276-mile WLTP battery range, but there’s a 408hp dual motor version with four-wheel drive, a range nearer 300 miles and a 4.7-second 0-62mph time. Or, if long distances are more your thing, there’s a long-range version, back down to just the one motor but with 340 miles possible from its 78kW battery pack. Every Polestar 2 charges at up to 150kW speed meaning, if you can find a suitably rapid charging station, it can take as little as 40 minutes to get a flat battery to 80%.

But, while those things make the Polestar 2 appealing in a Volvo-type way, what’s really *good* about the car is what it feels like. There are obvious Volvo parts and DNA, yes, but between the futuristic refinement of the driving experience itself, and the huge Google-powered touchscreen, and the minimalist cabin, and its intriguing ‘tall postmodern Volvo’ overall look, the Polestar 2 feels a bit special. It feels heftier in every way than a Tesla Model 3 (for better and worse – we’ll get to that), and if you actually are looking to align with a car company that cares, the Polestar has some innovative eco tricks up its sleeve. Vegan cloth for the seats, for one thing.

It could be more comfortable, mainly. The issue is that the standard suspension setup is too firm, which on poorer roads tends to judder you on your chair like you’re sat on the bass bins at a Scooter gig. It's not catastrophic, by any means, and in theory you can fix the problem by ordering your car with the Performance Pack, a £5k option that gives you 22-way manually adjustable dampers – a cool and highly unusual nod to Polestar’s racing lineage. Still, it seems a misstep to make that the solution to an unnecessary problem.

The 2 could probably do with a little more rear space too, especially for a car of such imposing proportions, albeit it’s fine unless the people in the back are adults on the taller side. 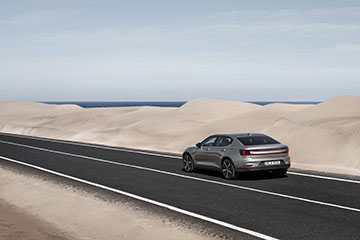 There’s no doubt that the Polestar 2 feels like a more well-honed driving experience than the Tesla Model 3. The 3 feels in many ways like a mad drivetrain shoehorned into a cheaper car, whereas the 2 feels like a luxury car primarily. A hefty one at that. Even the twin-motor Polestar, with its 400hp plus four-wheel drive setup, is “effortless” in the way it accelerates rather than “stark raving fast” like the dual-motor Model 3 is. This cool, calm and collected way of doing things can occasionally make the 2 feel a little anodyne.

But a lot of people will like that. Slightly harsh ride quality aside, the Polestar feels in a good way like a top-of-the-line Volvo saloon. It’s extremely quiet, the driving position is nigh-on perfect and with the added bonus of a slightly raised, almost SUV-like quality, and there are elements of the user experience that Volvo…Polestar, sorry…have clearly thought long and hard about. There’s no start-stop button for the motor. You just get into the car, stick the lever in D and go. That’s one unnecessary step avoided.

The decision to use Google for the infotainment means it’s as intuitive as can be, because Google has this lovely bit of software running its phones called Android. You might have heard of it. And if you’re one of those people who hates Android don’t worry - the Polestar 2 is Apple CarPlay compatible which, bonus, feels totally subversive to use, like drinking Coke from a Pepsi can.

The mirrors too, they’re frameless which means the housing can be smaller – better looking and quieter – while maximising the view area, reducing bling spots. Even the way the driving experience can be tailored is unusual: there are no drive modes as such, but instead you can change the steering from “light” to “firm”, and tell it whether you want brake energy recapture on or off – there’s actually a setting called “one pedal driving”. It’s like the car is talking to you in normal language, rather than in car speak.

Nonetheless, back to standard car speak, the dual-motor model has a clever four-wheel drive system that apportions power front-to-back to give the car maximum traction. The way the 2 steers is pure calmness too - it doesn’t actually give you a huge amount of feel, but rather absolute accuracy and an impression that this chassis is steadfastly stuck to the ground. It’s impressive not in a visceral way, like a Tesla is, but amazing when you think about it academically, that it’s putting all that power down without any torque steer or drama. It feels like the car could cope with 800hp. 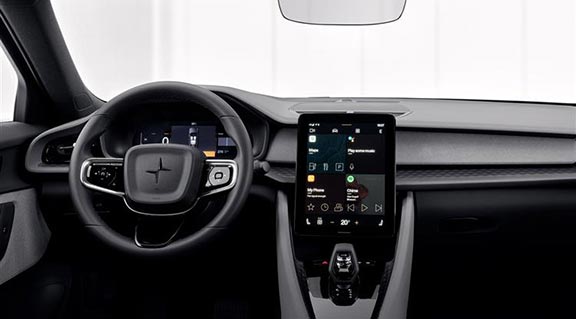 Our only problem with the Polestar 2’s beautifully minimalistic cabin is the design of the cupholders. Yep. That might sound insignificant but honestly, it’s a thing. The problem is that the second one is buried inside the centre console so if you’ve got two people in the car, each with a vessel of liquid, you must fold the armrest away. No more relaxed elbows for you.

It’s not very Volvo at all to sacrifice mundane practicality for visual appeal like that, and while you’d say that in-cabin practicality isn’t the best, the Polestar does get the basics at the back end right because it’s not actually a saloon, it’s a hatchback. Lift the big tailgate and you get a lovely 405-litre space, rising to 1095 litres with the rear seats folded flat. Compare that to the Tesla Model 3’s 425 litre total capacity, a number Tesla gets to by adding the enclosed front and rear luggage spaces up. Golfers will get on better with the Polestar, with their long stick bags and that.

The Polestar 2 is a premium car with a £40,000 starting price, but also a prime reason why leasing is so appealing when it comes to electric cars. Rates start at less than £450 per month for a Standard Range model, which doesn’t feel like much for such a well specified, relatively rare and genuinely luxurious car. You’ll of course save a fortune in running costs too, with no road tax at all, just 1% benefit-in-kind tax and the day-to-day savings of electricity as fuel rather than petrol or diesel.

Early Polestar 2s came with two option packs bundled in: Plus and Pilot. The former adds a panoramic glass roof, wireless phone charging and a Harmon Kardon stereo upgrade, and the latter more safety kit including self-steering cruise control, fancier LED headlights and a 360-degree parking camera. They’re no longer standard but they are both worthwhile to choose, albeit the 2 is very well specified in any event, including 19-inch alloy wheels, an 11-inch touchscreen, a digital instrument panel, electrically adjustable heated seats and loads of safety stuff. This is a Volvo, after all. Euro NCAP awarded the Polestar 2 five stars in 2021.

The world’s best-selling electric car is so for a reason: fast, fun, futuristic and f…spacious.

Audi’s smallest EV is priced on par with the Polestar, has similar range and performance and is a ‘coupe’ of sorts.

Built on the same chassis as the Polestar but with a very different feel. Less fun, but more comfy and versatile.

"It feels heftier in every way than a Tesla Model 3, and if you actually are looking to align with a car company that cares, the Polestar has some innovative eco tricks up its sleeve."

3 things to remember about the Polestar 2: