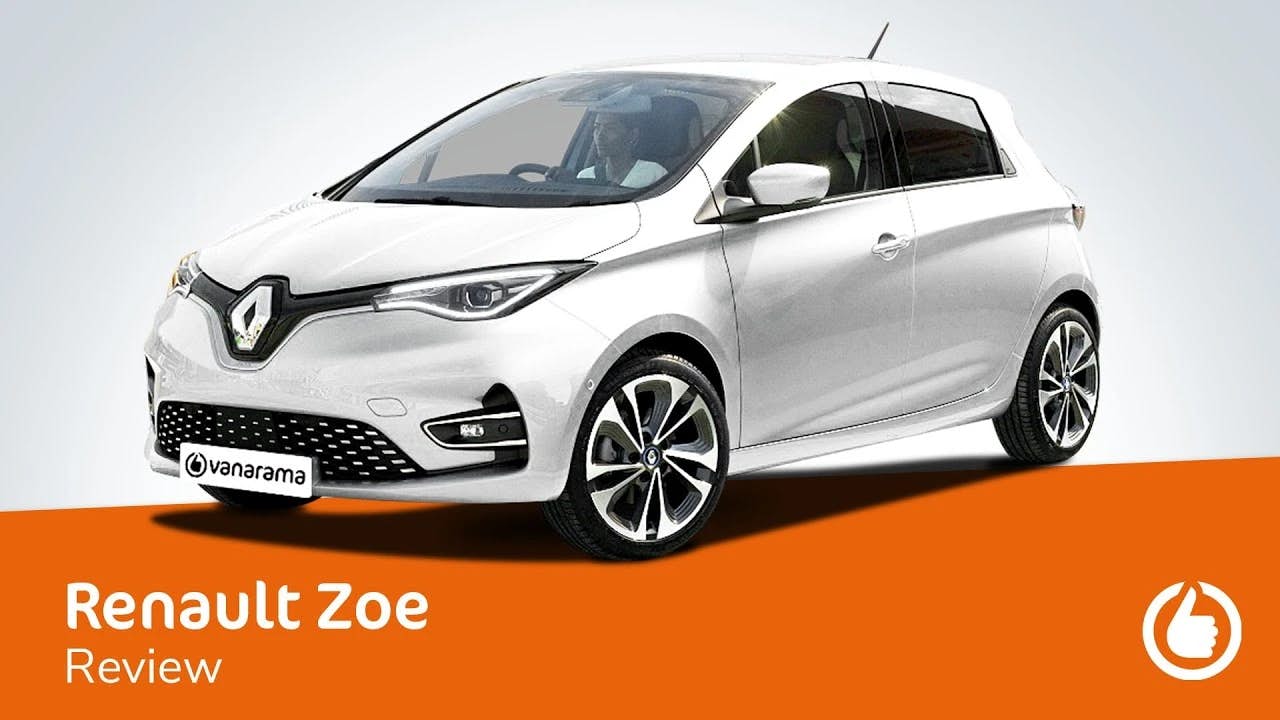 The Renault Zoe is the French company’s electric supermini, and it's been on the scene since 2012 – yup, that's TEN years on sale. And although electric cars have in primitive forms been around since the dawn of the automobile in the 19th Century, in modern terms, being a decade old makes the Zoe one of the forerunners of the modern boom in attainable zero-emissions cars.

Related to the Nissan Leaf, which is an even longer-serving EV, the Zoe is a straightforward, pragmatic electric runaround – there’s no flashy styling nor highly digitised interior here, so if you’re after unmatched kerb appeal it might not be the EV for you. That said, it does have a spacious and practical cabin, and thanks to a large 52kWh battery pack, it can go up to 239 miles on a single charge, making the Renault Zoe's battery range the longest in its class. You can choose from Play, Iconic and GT Line trim levels, and it's also available in 8 colours in various paint types so some customisation is possible, check out our Zoe colour guide for all the details.

Facing a variety of EV rivals of various shapes and sizes, the principal opposition comes from the Peugeot E-208 and Vauxhall Corsa-E (both electrified versions of hatchbacks that are otherwise available with internal combustion engines, whereas the Zoe is a bespoke EV model), as well as stylish, upmarket city cars such as the MINI Cooper S Electric, the Fiat 500 Electric and the Honda E.

What’s Good About The Renault Zoe? 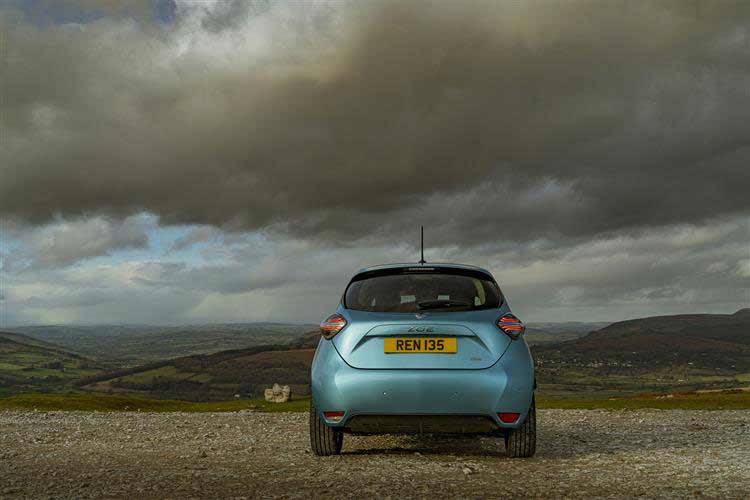 It’s that battery range, mainly. When Renault launched the Zoe back in 2012 a 22kWh battery gave an official range of 90 miles. Which, in reality, would’ve been more like 50-60. Eek. However, Renault has been tweaking and fettling the Zoe over the years since, giving its EV a 40kWh battery pack in 2016 and then an even larger 52kWh unit in 2019. 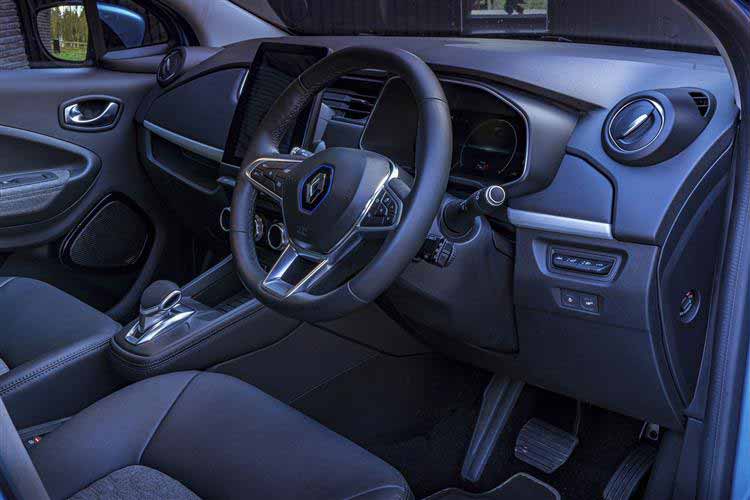 Despite being a well-proportioned small hatchback with a nicely made interior, the Renault Zoe does lack some star appeal compared to something like the Honda E. Its ethos is one of flying under the radar, so on the outside it looks fairly plain, although it does come in a variety of finishes and colours.

The Renault Zoe is pretty old in car years - most models are replaced around the 7-year mark - and that means the chassis and tech are no longer cutting edge. So while it picked up a 5-star Euro NCAP crash-test rating when it was new in 2012, by the 2020s the much more stringent testing resulted in it being stripped of all its stars. That's not ideal, there's no denying it. Having said that, the Zoe hasn't become any less fundamentally safe, and in reality it says more about the NCAP test, which now puts a lot of focus on the sort of active safety systems that just weren't widespread back in 2012.

Top models come with a 9.3-inch infotainment screen and a modern looking digital instrument panel, albeit the Zoe still doesn't have the 'wow' factor of a newer EV. Some will see that as a blessing though, because the Zoe's basic intuitiveness is excellent. The instrument panel is easy to read and the touchscreen is generally easy to fathom and includes Android Auto and Apple Carplay. 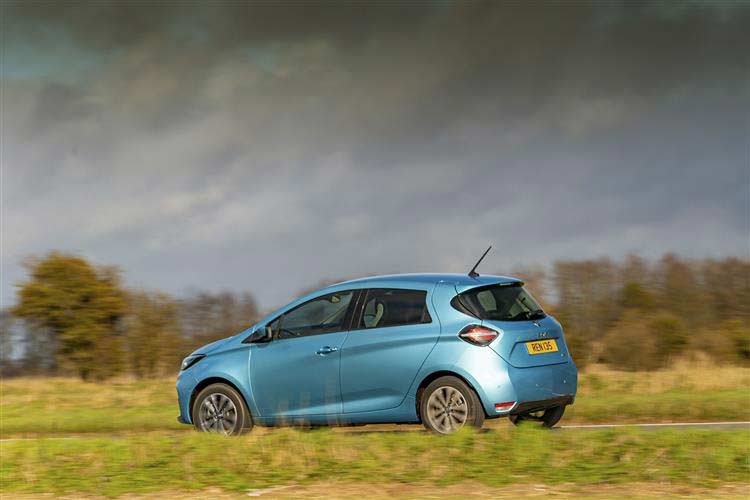 The Zoe just feels like a conventional supermini hatchback from behind the wheel. It just so happens to be one without an engine. And that's where its real appeal lies, in the fact that it doesn't feel unusual or too techy. You could jump from any petrol or diesel small hatchback into a Zoe and feel perfectly at ease.

We drove one from Hemel Hempstead to Wales and back in our Zoe EV Road Test to put it to the test on a longer journey, and it drove very well, making the 210 mile first leg on a single charge.

Renault offers 2 powertrains for the Zoe. The first, called the R110, has an 80kW (109hp) motor and 225Nm, allowing for 0-62mph in 11.4 seconds and a limited top speed of 84mph. The R135, meanwhile, has a 100kW (136hp) system that develops 245Nm, which cuts the 0-62mph time to 9.5 seconds and raises the top speed by just 3mph to 87mph. Neither model feels particularly quick, even by the standards of other modestly powered EVs, but they are quick to respond to the accelerator, smooth and quiet, with the Zoe making an odd sci-fi keening noise outside at low speeds to let pedestrians know it’s coming.

The steering and pedals feel especially light, and while there's not much joy in throwing it into a series of corners at pace - it's quite tall and heavy, so it's not really designed for that sort of driving - it does do the "pottering about town" thing very well. There is a little firmness in the ride that you'll feel if you, say, hit a pothole or a speed bump, but generally there's a sense of calm comfort in a Zoe, especially at town speed. At motorway speed it does get a bit noisy though, with the sound of the tyres and wind filtering into the cabin. 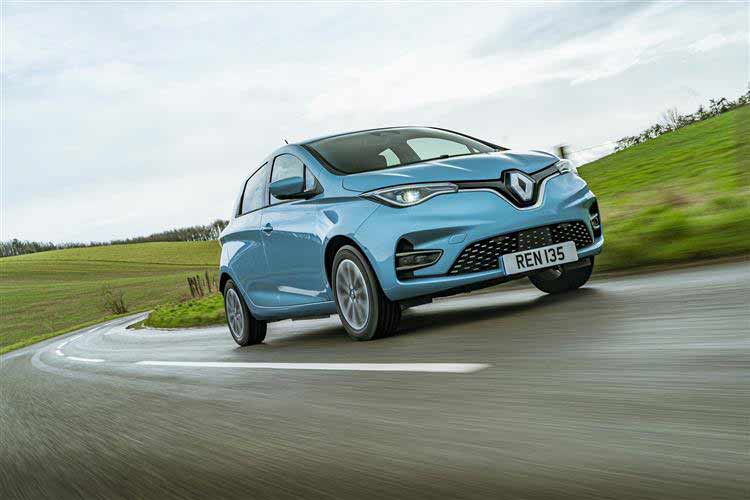 Space inside is good and the Zoe has a relatively large boot, measuring 338 litres with all seats in place and rising to 1225 litres with the 2nd row of seating folded down. As the driver, you sit nice and high behind the wheel – maybe too high, by about 6 inches or so, especially if you’re unusually tall – and visibility out is good in most directions, although the large and chunky C-pillars do inhibit the view over your shoulder when you’re reversing at walking speeds.

In terms of charging, the Zoe will go from 0-100% of its 52kWh battery in 17 hours on a domestic 3kW AC connection. Have a 7kW wallbox installed and that time reduces to a much more acceptable 7 hours, meaning overnight charging at home will be your friend, but the Renault also has the capability to be optioned up with 50kW CCS Combo 2 DC rapid charging connections, which’ll put 0-80% charge into the battery in just 45 minutes if you can find a suitable public charging point. If the Zoe will be your first electric car and you have questions about topping your battery up daily check out our home charging guide.

How Much Will The Renault Zoe Cost Me?

One of the benefits of Renault continuing to update the 2012 Zoe rather than replace it with an entirely new model is that it keeps development costs down, which in turn means a lower list price. Therefore the Zoe is one of the most affordble EVs on the market.

Equipment levels are good across the board, with the top-spec GT Line+ coming with automatic lights and wipers, climate control, front and rear parking sensors with a reverse parking camera, a heated steering wheel and heated front seats, cruise control, keyless entry and go, and 16-inch diamond-cut alloy wheels, among more.

Plus, when you lease one with Vanarama we’ll also throw in a free home charger!

Its distinctive, feminine name is the Greek for ‘life’, and it was also useful for Renault which tends to call its ‘zero emissions’ EVs ‘Z.E.’ in other ranges – thus Zoe fitted the bill on both counts. Sadly, when it was announced, it didn’t exactly please French people who had christened their daughters Zoe – there was uproar in the Renault’s homeland and even petitions demanding the carmaker changed the vehicle’s name before it signed it off for production. Clearly, Renault got its own way… much to the chagrin of at least 2 French girls who were called Zoe Renault, whose parents brought an official legal case to court in an attempt to get the company to change its mind (and the EV’s model name).

What Alternatives To The Renault Zoe Should I Consider?

Related to the Zoe, the Nissan Leaf is a larger-bodied hatchback for those needing added practicality.

Only an electric version of an existing supermini, but the E-208 is brilliant to look at and sit in.

"An all-electric classic, the Zoe's top strengths are its fantastic range and affordability."

More On The Zoe

Renault Zoe Colour Guide
Here’s a detailed look at the paint palette available on the all-electric Renault Zoe 5, which we hope will help you choose your perfect new car colour!Read Guide
Renault Clio v Renault Zoe
It’s a French face-off as the Renaults Clio and Zoe go tête-à-tête to see if petrol or electric is the right choice for you.Read More
Charging An Electric Car At Home
Leasing an electric car? How and where to charge it will be one of the biggest questions on your mind. Find out the benefits of home charging and how best to do it...Read More