It’s a French face-off as the Renaults Clio and Zoe go tête-à-tête to see if petrol or electric is the right choice for you. The Zoe EV offers low running costs, while the Clio is roomier and more fun to drive. Both come with closely matched equipment and lease costs, so let’s find out which is the one or just a non. Renault is one of the go-to names when it comes to small cars. Whether it’s a city car, supermini or compact crossover, with a petrol engine or electric motor, Renault has it covered. At the heart of all this is the Clio that has been delivering the goods for 3 decades. Always one of the better-looking cars in its class, the Clio now comes with petrol-only motors or the option of a petrol-electric hybrid. If you’d rather go full electric, Renault has an answer for that, too, in the shape of the Zoe. It’s been about since 2012 and was originally shown as a concept for a Clio EV. Despite earning its long-service medal, the Zoe has evolved into a very able electric choice, thanks to the latest versions offering up to 245 miles on a full charge and depending on which trim you choose.

This sets up a tricky decision for drivers: Clio or Zoe, petrol or electric? Let’s find out which will suit you best.

Apart from the obvious difference in what ‘fuel’ the Clio and Zoe each use, there are fundamental impacts brought about by each one’s chosen method of propulsion. For instance, the Zoe has its batteries set out in a long, flat bed underneath the passenger compartment. As a result, its occupants, and the driver in particular, feel as if they are sitting on the car, whereas the Clio lets its passengers cosy down into the car.

A small but noticeable distinction between these 2 is their gearboxes. The Zoe has a single-speed transmission, which allows 1-pedal driving for much of the time as you only need the brakes for more urgent stops. In the Clio, a 6-speed manual or automatic ’box is what you get based on which engine you pick. The Clio’s transmissions are smooth, but it’s hard to better the seamlessness of the Zoe’s. With more low-down shove instantly available in the Zoe thanks to its electric motor, you’re not too aware of its greater weight when compared to the Clio. We’ll cover this more in the Driving Differences section, but the Clio’s lighter step and its effect on handling might convince some drivers in its favour.

As for the styling of this pair, both have a fresh-faced appearance. The Clio was introduced in 2019 and has all of the latest Renault design cues, such as the C-shaped daytime driving lights and a grille that swoops around the front lozenge badge. The Zoe was facelifted in 2016 and it’s worn well, and the same is true of its interior style that swapped a slightly clunky centre console for the current car’s much simpler, sleeker look that’s near-identical to the Clio’s.

As soon as you get past the initial novelty of driving electric cars, the Renault Zoe is simplicity itself to pilot. Just press the gearlever into reverse or drive and off you go. There’s no noise other than the audible warning outside at speeds up to 19mph to let pedestrians know you’re there. Acceleration off the mark feels brisk, with 0-62mphin 11.4 seconds for the R110 model, and it’s all commendably fuss-free. In the Clio we have for this comparison, the 6-speed manual gearbox is light and easy to use, or you could opt for an automatic 6-speeder if you don’t like changing gear yourself. Either way, the Clio is a bit slower to accelerate than the Zoe, taking 12.2 seconds in manual form for 0-62mph. More tellingly, the Zoe is nippier around town and when overtaking on A-roads. However, the Clio is better suited to anyone who routinely drives on motorways. It’s more refined thanks to much less wind noise than the Zoe suffers from. We also rate the Clio’s ride and handling a good notch above the Zoe’s. On anything but the most even surfaces, there’s an underlying jitter to the Zoe’s suspension as it copes with the weight of its batteries. This also shows up in the handling, where the Zoe leans all too easily in bends where the Clio feels sure-footed and fun.

The Zoe is longer and taller than the Clio, which suggests the EV should be the roomier car. There’s certainly no shortage of space for those in the front of the Zoe and the high-set driving position affords good forward vision. There’s no driver’s seat height adjustment, whereas this is standard across the entire Clio range.

Renault has made the latest Clio quite a bit wider than its predecessor and this lends the cabin a real sense of space. Driver and passenger can flex their elbows without jutting into one and other, while in the back there’s enough room to fit 3 kids without Armageddon breaking out.

From the driver’s seat, both Clio and Zoe present all the important information on clear dash displays and the 2 share almost identical central infotainment screens. These are either the smaller 7-inch touchscreens, or the 9.3-inch units in higher spec versions. They’re simple to use and have plenty of features, including Apple CarPlay and Android Auto, though Renault’s system is a fraction slower to react to inputs than some rivals’ software.

Head round to the back and the Zoe has the bigger boot, offering 338 litres to the Clio’s 318 litres, or 299 litres with the hybrid model. In the real world of shoving in shopping bags, you’ll find both are more than up to the job and you can tumble their 60/40 split-and-tip rear seats for bigger cargo, unless you opt for the base model Zoe that does without this feature.

While the cost of petrol will vary, the Clio’s 54.3mpg combined average economy puts it alongside the best in its class for fuel consumption. With its 42-litre fuel tank, that means you could travel up to 500 miles between fills, though more mixed driving would see that at a more realistic 400 miles. In the Zoe, you’ll be recharging it around the 160-mile mark, as its real-world range is about 200 miles compared to the claimed range of 239 miles for the R110 Iconic model.

As the Zoe produces 0g/km of CO2 emissions, it attracts just 2% benefit-in-kind (BIK) tax for company drivers. In the Clio, business users will pay 27% BIK, due to its 119g/km CO2 output.

The Clio has a 2-year, 18,000-mile service schedule, while the Zoe requires a routine garage visit every year or 18,000 miles, based on whichever comes soonest. Both the Zoe and Clio have the same 5-year, 100,000-mile warranty provided by Renault.

Renault has greatly improved the Zoe’s appeal with the upgrade to a 52kWh battery in both the R110 and R135 models. On paper, it means the Zoe can claim a combined driving range of up to 239 miles. On the road, this translates to a real-world 200 miles of usable battery charge, which is more than up to the demands of most supermini drivers. 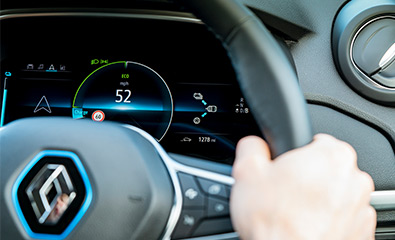 Every Zoe comes with a Chameleon Charger for charging between 3- and 22kWh using a variety of sockets, and a Type 2 charging cable is included as standard too. Using a 7.4kW wallbox like the one most EV drivers have at home, a Zoe R110 will take around 9.5 hours to charge from flat to a full 100%. If you use a 22kW charger, that time drops to a more manageable 3 hours. Hook up to a 50kW charger like those in many public charging points and from 0-80% charge takes little more than an hour.

A phone app called ‘My Renault’ lets you choose when you charge the car at home to take advantage of off-peak electricity prices. You can also use the same app to warm or cool the car prior to you setting off, and it also lets you plan a journey to include charging points and remotely check on battery charge.

While driving, you can select the B-mode for greater regenerative braking that allows 1-pedal driving unless you need to stop in an emergency. This style of driving quickly becomes second nature as you use the throttle pedal to modulate speed, rather than just to accelerate.

Still can't make a choice? Why not check out our dedicated Zoe review and Clio review and see what each has to offer.