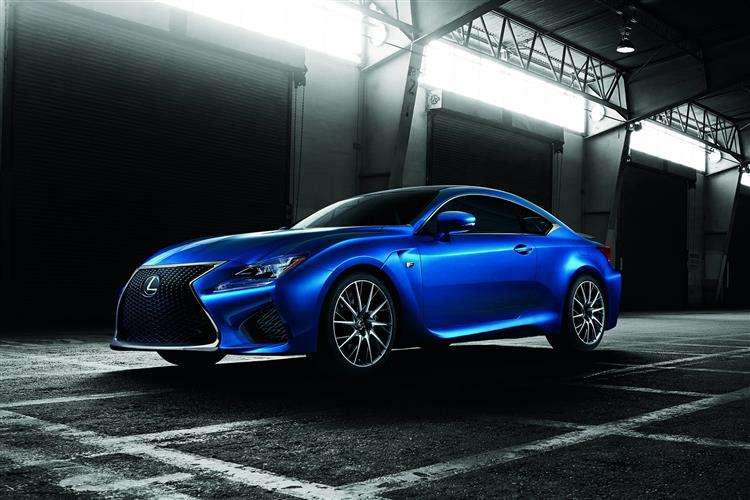 The Lexus RC F crashes the sports coupe party with a 5.0-litre 450bhp V8 doing the honours. Front engine, rear wheel drive and a big normally-aspirated engine is a classic recipe and Lexus matches this with sublime build quality and a humungous equipment list. We didn't see this one coming but it could be a real force to be reckoned with.

Two years ago we had a Lexus IS F on test. We knew that it would be the last time we'd get to play in this car because it was being deleted from the range, so we gave it one last blast, revelling in that fantastic 5.0-litre normally-aspirated V8, sending it sideways out of T-junctions and then shedding a bit of a tear when it was finally collected. We thought it would be the last of that particular line. Its rivals from Mercedes and BMW were ditching their large-capacity atmo engines in favour of smaller turbocharged powerplants and where the Germans went Lexus always tended to follow. Just recently an email pinged into our inbox from Japan, detailing the specification of Lexus' RC F coupe. We figured there'd be some sort of turbocharged engine under the bonnet, perhaps linked to a hybrid drive system which, as we would like to point out on record, would be a good thing. Progress, emissions, economy; that sort of worthy stuff. Therefore you can imagine our surprise and delight when we got to the engine specs of this coupe and discovered that it was a tuned version of the 5.0-litre V8. Lexus had suddenly become the Lamborghini of the performance coupe sector, blending modernity with the sort of old-school blood and thunder that is hard to resist.

Buckle up, because the RC F's specifications sound fantastic. Lexus claims the 32-valve 5.0-litre engine is the most powerful it has yet created for a production car. It's mated to an eight-speed Sports Direct Shift transmission, and delivers more than 450bhp and 520Nm. Bear in mind that the latest BMW M4 is good for 426bhp and relies on a pair of turbochargers to get there and you'll appreciate how special this engine is. It's not just all displacement and no decorum either. The RC F's gets standard fitment Brembo brakes, Sachs monotube shock absorbers, an active rear wing, Lexus's Vehicle Dynamics Integrated Management (VDIM) system and is garnished with some beautiful 19-inch forged alloy wheels. Should you want an even more focused version, look no further than the RC F Carbon model. This benefits from additional performance features in the form of a torque-vectoring differential and a CFRP (carbon fibre-reinforced plastic) roof, bonnet and rear spoiler. It marks a world first in the use of a torque-vectoring differential in a front engine/rear-wheel drive car, giving the driver the choice of with three operating modes to optimise traction and vehicle control in different scenarios, from everyday driving to track performance. Despite its hardcore credentials, Lexus is aiming to build something you can easily use as your daily driver.

There are some coupes that look like saloon cars that are merely down a couple of doors and then there are cars like the RC F. The design cribs a few cues from the LFA supercar, most notably in the use of air cooling and aerodynamic features. Air outlets on the bonnet, like those on the LFA, work together with front cooling ducts to support both engine cooling and overall vehicle stability. To the side there are air outlets behind the front wings that add to the engine and brake cooling performance, and which merge neatly with side sill extensions to create an 'L' shape. It features its own interpretation of the Lexus signature spindle grille, which dominates the front of the vehicle and has a subtle 'F' motif embedded in the mesh below the Lexus badge. In profile, there's a sleek roofline and a distinctive curved step in the window line leading into the C-pillar. The trademark quad trapezoidal exhaust outlets are carried over from the IS F. This time they're functional. The cabin doesn't instantly scream performance car. Instead it looks more like one of Lexus' luxury models. Look closer and you'll spot the sporty cues such as the instrument meters, steering wheel, seats, pedals and trim. It's just very downplayed. The instrument meters mark a further development of the switchable, diving mode-dependent central dial featured in the LFA. The dial pack comprises a large, centrally mounted tachometer that changes according to driving mode, digital and analogue speed read-outs, a differential torque vectoring monitor, a G-force meter, oil and water temperature gauges, mileage information and a stopwatch for clocking that bridge to gantry time at the Nurburgring.

Given that the Lexus IS F saloon bowed out retailing at £58,350, the £59,995 asking price for the RC F doesn't seem at all unreasonable given that Audi will charge a £4,000 premium to graduate from an S4 saloon to an S5 coupe. As you'd expect from Lexus, you get a ton of standard equipment including full LED headlights with automatic high beam function, a 10-speaker multimedia system including DAB, DVD player, Remote Touch touchpad control and Lexus Premium Navigation, dual-zone climate control and Drive Mode Select. There arealso front and rear parking sensors, electric, auto-dimming, folding and heated door mirrors; cruise control, an auto-dimming rear-view mirror, electric steering column adjustment and keyless Smart Entry. The £67,995 RC F Carbon also gets dedicated 19-inch forged alloy wheels and Alcantara upholstery. It also comes equipped with the Mark Levinson Surround Sound system as standard. As with the RC F, the adaptive cruise control/pre-crash system combination is available as an option. Safety provisions include eight airbags, a reversing camera, Hill Assist Control, Lane Departure and Rear Cross Traffic Alert, a blind spot monitor and VDIM, which co-ordinates performance of the ABS, brake assist, traction control vehicle stability control and electronic brakeforce distribution. Options for the RC F include the torque-vectoring differential featured as standard on the RC F Carbon.

One of the reasons we thought we'd sadly seen the last of the 5.0-litre normally-aspirated V8 is, and there's no real way of sugaring this particular bit, it was just plain uncompetitive when it came to economy and emissions. Lexus has worked on the engine in the RC F but it can only do so much and it's doubtful that it'll get anywhere close to the BMW M4's figure of 194g/km and 34mpg on the combined cycle. That comes with a rider though. Modern turbocharged engines are designed to do very well on the EuroNCAP test and tend to fare less well in real world conditions, so while the Lexus RC F might seem like a dinosaur when the published figures are compared, in real terms the disparity in running costs might not be anything like so great.

Who'd have thought it would have been demure Lexus, of all people, who would bring us what is one of the most politically incorrect supercoupes on general release? Compared to the RC F, the Audi S5 and the BMW M4 look like buttoned-down sybarites. It's more on a par with Mercedes' unreconstructed C63 AMG coupe. Jaguar's F-Type R coupe also sports a 5.0-litre V8 but is some £20,000 more expensive and probably plays to a different crowd anyway. Pricing looks reasonable, with the RC F pitched at much the same price as a BMW M4 with an automatic gearbox. The Carbon model looks good value too, tacking another £8,000 onto the asking price for the carbon fibre extras, the booming Mark Levinson stereo, and the Alcantara trim as well as the trick differential. That's less than Ferrari charges for a set of matching leather boot luggage. We're waiting to get hold of an RC F and see how it stacks up next to a BMW M4, but for those who've put down deposits, the omens look very good indeed.