Why Lease the Mercedes-Benz GLE Coupe? 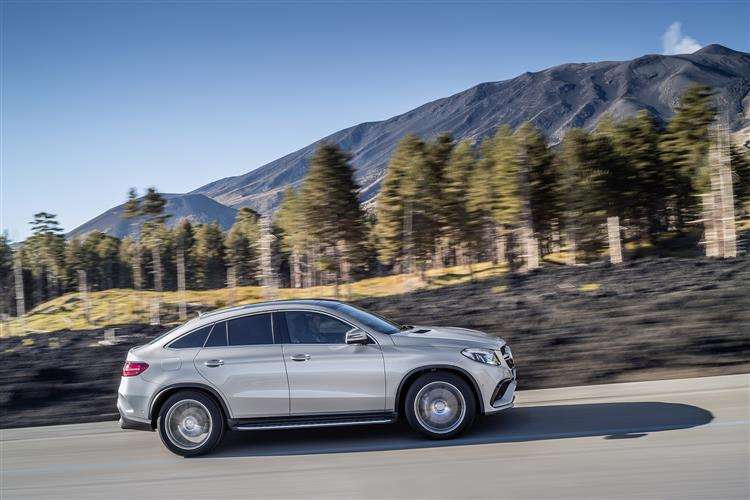 The Mercedes-Benz GLE Coupe is the three-pointed star's take on BMW's X6, a vehicle that rides on SUV underpinnings but which features a coupe-like sloping roof. Whether you like this genre of car or not, it's hard not to be impressed by Mercedes' execution of the theme. It's a sportier, more stylish coupe-styled version of the GLE-Class five-door model which the brand previously badged as its M-Class.

Mercedes-Benz clearly puts a great deal of thought into attracting younger buyers. Of the big three German prestige brands, it has an older ownership profile than either BMW or Audi and although the power of the grey pound can't be underestimated, the company needs young bloods to replace the ones that depart Benz ownership in boxes. The more dynamic A, CLA and GLA models are working at the lower end of the range, but what of the more well-heeled thirty and forty-somethings who want something that doesn't look more at home in a Saga Holidays brochure? The GLE Coupe is what the brains trust at Mercedes have come up with. Scoring zero out of ten for originality, it's basically Sindelfingen's take on BMW's X6. Despite polarising opinion, there were enough people who loved the X6's coupe-like roofline to make it a serious contributor to BMW's bottom line and Mercedes wants in on the action. Does its me-too version offer anything new?

On the road, this GLE Coupe carries a little more weight than its BMW X6 arch-rival thanks to underpinnings sourced from Mercedes' more conventional GLE SUV model. That's a little limiting in the base 258bhp 3.0-litre V6 diesel 350d variant, though even here, there's decent traction and relatively agile handling for a car this high and heavy. Plus there's the benefit of a 'DYNAMIC SELECT' handling set-up that allows you to tweak steering feel, throttle response, gearshift timings and the settings of the AIRMATIC suspension's adaptive damping system to suit the way you want to drive. Things improve significantly though, if you're able to stretch up to the version wed recommend, the 367bhp 450 AMG V6 BITURBO petrol model, a variant capable of 62mph in 5.7s, 31.7mpg on the combined cycle and 209g/km of CO2. This version's lighter than its 350d stablemate and comes with a more responsive 40:60-split rear bias for the 4MATIC 4WD system that's fitted across the GLE Coupe range. Petrol people also get an extra sportier 'Sport+' mode for the 'DYNAMIC SELECT' system that delivers a brilliant crackling engine soundtrack. And there's the option, denied to diesel buyers, of a 'Sports package' that includes Mercedes' clever 'ACTIVE CURVE' system, this significantly improving ride quality and reducing bodyroll. The 'ACTIVE CURVE' set-up comes as standard on the top version of his car, the frantically quick 585bhp V8 BITURBO petrol-powered Mercedes-AMG 63S model.

The GLE Coupe's styling won't come as much of a surprise if you imagine Mercedes' take on a BMW X6. In fact, were you to park the two vehicles side by side, it would take more than a casual glance to tell them apart. Like its counterpart from Munich, the GLE Coupe features a sweeping, coupe-like roofline and rolls on some seriously big alloy wheels. Even the entry-level cars get 20-inch road-rollers and buyers can upgrade to 21 or even 22-inch rims. At 4,900mm long, the GLE is a mere 9mm shorter than the X6, but at 1731mm tall, it's 29mm taller. The 2,915mm wheelbase is 18mm shorter, so there's really not too much to separate the cars in terms of dimensions. The interior seats up to five people and Mercedes claims the rear bench is the widest in its sector. With a maximum of 1650-litres, this Coupe also offers the largest luggage compartment in its class, although quite what this class is remains open to interpretation. For instance, Mercedes is claiming a record for coupe luggage capacity. Hmmm. The cabin features design elements familiar from the C, E and S-Class models. The 'floating' information display is partially integrated into the instrument panel, while the centre console houses the COMAND controller with the touchpad fitted above. The interior of the GLE 450 AMG features AMG sports seats and a black nappa leather three-spoke AMG sports steering wheel. AMG carbon-fibre trim and piano lacquer also lift the cabin above the rest of the GLE Coupe line-up.

You've to find a model-for-model premium of around £4,400 over a standard Mercedes GLE if you're to own this more stylish Coupe version. That means GLE Coupe pricing that sits primarily in the £60,000 to £72,000 bracket - or at least it does in the mainstream line-up: you can pay nearly £100,000 for this car if you opt for the top 585bhp Mercedes-AMG 63S version and add in a few well-chosen extras. Most buyers though, will be looking at the two more conventional models. The 258bhp GLE 350d diesel offers an entry point into the range and there's a premium of just over £2,000 to pay if you want to upgrade from that variant into the potent V6 Bi-turbo 367bhp GLE 450 AMG petrol model we tried. Whichever version you prefer, automatic transmission, AIRMATIC air suspension with adaptive damping and 4MATIC 4WD all come as part of the deal, as does the 'DYNAMIC SELECT' handling control system. With the two standard models, there's the option of a plusher 'designo Line' trim package for a premium of around £9,000.

The GLE Coupe has to carry around about 200kg more weight than its BMW X6 arch-rival. Despite this handicap though, we don't think many prospective buyers will be too concerned by the figures that this car delivers. Indeed, the most frugal 350d diesel variant could be cheaper to run than some apparently smaller cars. You're talking 40.9mpg on the combined cycle and 187g/km of CO2, which, to give you some perspective, is almost exactly the same kind of showing you'd get from a base diesel Range Rover Sport. Even the BITURBO six cylinder GLE 450 AMG petrol variant doesn't do too badly. Thanks in part to the more efficient 9G-TRONIC auto gearbox that's been fitted to mainstream models, it's able to return 31.7mpg and 209g/km of CO2, which is about 10% better than you'd get from a rival BMW X6 50i or Porsche Cayenne S. But what about the storming Mercedes-AMG GLE 63S flagship version? After all traditionally, those who bought V8 petrol-powered Mercedes SUVs could hardly have offended Greenpeace further if they'd fitted a whaling harpoon gun to the bonnet. Going for the GLE 63S still won't get you a place on that organisation's Christmas card list, but this variant does manage 23.7mpg on the combined cycle and 278g/km of CO2, which isn't bad for a 585bhp sporting SUV.

The GLE Coupe almost feels like the SUV that Mercedes-Benz was reluctant to build. Where BMW went first, copped the flak with its X6 and then watched the orders roll in, Mercedes has instead adopted a wait and see attitude and, when the coast looked clear, shown its hand. Still, it's hard to argue with the quality of vehicle that has emerged. The GLE Coupe is beautifully built and, above all, it's beautifully assured. It has the luxury of confidence and that's something that is apparent in every aspect of its make-up. We might well forget who got there first and who tagged along. Who knows, we might forget about SUV-coupes. In the here and now, however, here's one of the very finest.