Why Lease the Toyota Aygo Hatchback? 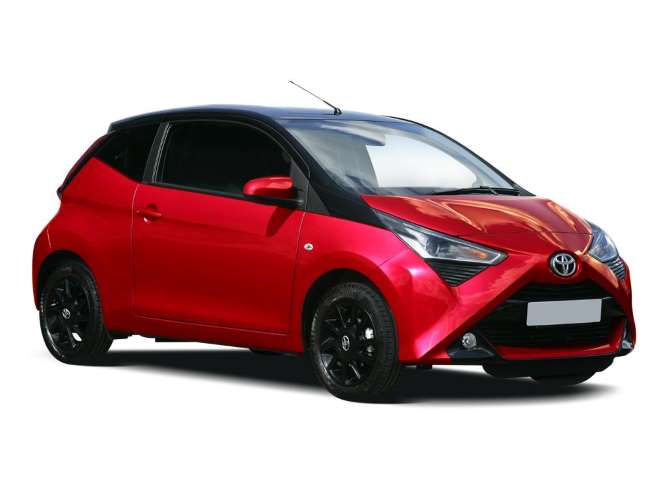 If you want a citycar with attitude, then Toyota's Aygo should already be high on your list. This x-cite special edition though, takes things up a notch. The experts at Car & Driving check it out

If you've £11,000 to £12,000 to spend on a citycar and want it to stand out, then this Toyota Aygo x-cite model might well appeal. Its bright blue Cyan Splash metallic paint makes it stand out - and there are all the other usual Aygo virtues too.

Toyota goes to extraordinary lengths to give its customers what they want. The company's global success is founded on customer clinics and buying feedback the world over. So when this Japanese brand says it knows what younger budget buyers want, it's worth taking notice. And what they're currently looking for, it seems, is something like this, the Aygo x-cite. The idea here is to make an already quite visually arresting ca stand out further. So x-cite buyers get a smart metallic blue paint job, special wheels and various other matching elements. As a result, buyers can be pretty sure that no one else down their street is going to have an Aygo that's quite the same. There's nothing different beneath the bonnet of course. Like all Aygos, this one gets a frugal revvy little 1.0-litre petrol engine. Let's check it out.

The 998cc three-cylinder petrol engine is much the same as the unit used by the previous generation Aygo, though Toyota assures us that it's not just a carry-over from the old car. The unit has been re-engineered to run with a higher 11.5:1 compression ratio and has an improved combustion chamber design for better efficiency. Friction losses have also been reduced, notably by using a new low-friction timing chain. And although it's still one of the lightest engines on the market, more weight has been saved by introducing a cylinder head with an ingenious built-in exhaust manifold. Power is modest - 68bhp - as is pulling power, rated at 95Nm. Still, nearly of that is available from as low as 2,000rpm, so you won't need to rev the car to death in order to get it moving. There are no pokier petrol engines and no diesel option. You can though get a self-shifting 'x-shift' gearbox though as an option (we hesitate to call it an 'automatic'). Actually, it's what the engineers call an 'automated manual' gearbox that can be used in fully automatic mode, or with manual gear selection using paddle shifts or the shift lever itself.

The design of the Aygo is quite striking, something that x-cite trim emphasises. There's bright blue Cyan Splash metallic bodywork with gloss black custom inserts for the door mirror casings, the front 'X' grille, the front pillar extensions and the rear bumper inserts. You also get 15-inch twin-spoke alloy wheels. The result is a real head-turner. The same colour scheme continues on the inside with the Cyan Blue theme continued on the air vent surrounds and carpet mat edging. The seats are finished in dark grey with contrasting blue and light grey bolsters and the centre console and gear shift surround are done in gleaming gloss black. Otherwise, the recipe is as it is on any other Aygo. The dash and switchgear are of a high quality and the materials used are much better than what was offered on the first generation model. There's plenty of room up front and the seat can be lowered - a boon for taller drivers as it gives them more head and shoulder space. Practicality is good too: this Toyota has a useable boot space of 168-litres that's 29 litres larger than the previous generation could offer.

Prices for this Aygo x-cite model start at around £11,300, which represents a premium of just over £2,500 over the least expensive Aygo variant in the standard range. In other words, you're really going to need to want the extra kit that comes as part of this package. There's a £400 premium if you want the added versatility of five doors and if you do go for the five-door bodystyle, then for an extra £700, there's the option of the 'x-shift' auto gearbox. Customers can mix things up by opting for a bi-tone bodywork package, which adds a metallic black paint for the roof and front and rear pillars, plus rear privacy glass. The pack cost is £395. Standard kit on the Aygo includes Toyota's 'x-touch' multimedia system, including Bluetooth and DAB, plus a reversing camera. There's also air conditioning, power-adjustable heated door mirrors, driver's seat height adjustment, split-folding rear seats, a leather steering wheel, leather gear knob trim, front fog lights and LED daytime running lights. Toyota has also added high levels of safety kit, which include six airbags ABS with emergency brake distribution, vehicle stability control and a tyre pressure warning system.

The Aygo x-cite delivers a combined cycle fuel economy figure of 68.9mpg and CO2 emissions from 95g/km. That CO2 figure will put buyers below the 100g/km threshold for annual VED, so there'll be no need to buy a tax disc. Should you choose the x-shift gearbox, the Aygo's numbers are barely dented, with 67.3mpg combined cycle fuel consumption and 97g/km CO2 emissions. Running costs are further enhanced by Toyota's warranty package of five years or 100,000 miles, whichever occurs soonest. Even though the Toyota Aygo, the Peugeot 108 and the Citroen C1 are technically the same car, the Toyota-badged product will retain more of its value. The Aygo is available in three and five door guises.

In a sector often packed with rather bland cars, the Aygo is certainly one of the most striking, especially in this x-cite guise. Yes, you've to pay for the little extras that set it apart but many style-conscious urban buyers will think the premium worth paying for a little extra exclusivity and trendiness. Otherwise, this model's virtues remain as before. It's not quite as practical as some rivals but it is impressively economical to run and fun to drive. If you're shopping in this sector, you'd probably like one.