Why Lease the Toyota Mirai? 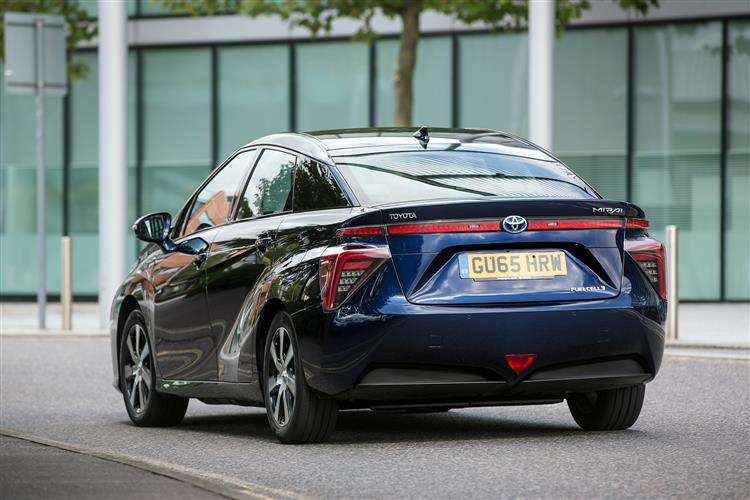 Is the future here yet? Toyota seems to think so and has named one of its most innovative models after the Japanese word for it. The experts at Car & Driving grapple with the Hydrogen Fuel Cell technology that allows the Mirai to live up to its name.

Toyota's innovative, fuel-cell Mirai marks another landmark in the company's relentless pursuit of progress. As convenient as a petrol car, but as clean as an electric one, the Mirai packs the future into a family saloon. Expect class-beating quality in a model that's leading the charge for hydrogen power.

Every now and again a new type of automobile comes along to challenge the traditional way of life for the millions of motorists who have long-established rituals governing how, when and where they drive. Toyota have form in disrupting the norm. Having introduced a bemused world to the Prius electric-hybrid in the late 'Nineties, the Japanese giant has been instrumental in opening the minds of motorists to alternative ways of fuelling and re-fuelling their car. With the Mirai, Toyota has taken another giant leap forward, overcoming both the limitations of plug-in electric vehicles and the scarcity of oil, by turning the most abundant element in nature - hydrogen - into a fuel that can generate electric power on-board. To have achieved this in a package that resembles a compact executive saloon is remarkable, and the new technology is supported by a growing network of hydrogen filling stations across Britain.

Despite all the new technology fuelling the Mirai, it's essentially an electric vehicle, which means the overall driving sensation has the same characteristics as any other electric car. Power delivery from the 113kw motor is smooth, instant and consistent from zero all the way to its top speed of 111mph, and the Mirai will reach 62mph from a standstill in around 9.6 seconds. Given its role as a compact executive saloon, ride comfort and cabin refinement take priority over sportiness and handling. That being said, the car has been engineered to have a low centre of gravity and balanced weight distribution, to counter the added weight of battery and fuel cell. This coupled with a suspension set-up more commonly found on sportier models shows that environmentally responsible driving needn't come at the expense of enjoyment. The attention that has been paid to cabin refinement speaks volumes for Toyota's efforts to produce a car worthy of its £66,000 price tag. Even though the motor is nearly silent, Toyota has gone to great lengths to prevent outside noise penetrating the passenger compartment, and throughout the car, soft padded textures have been used to give a luxurious feel to the interior.

The Mirai saves considerable space inside by replacing physical controls with large touch-screen surfaces that dominate the cockpit. The designers have thought about the needs of the likely drivers of this car and have included neat little touches like a handy storage area that allows wireless smartphone charging for compatible devices. This is a four-seat car due to the need to keep the heaviest parts as central as possible but passengers are compensated with plenty storage areas. Boot space, however, is smaller than most rivals. Much of the exterior design of the Mirai owes itself to the sciences of aerodynamic efficiency and electrolysis. Each surface is designed either to help the car slip through the air more easily, or to suck in more air to stimulate the process of turning hydrogen into electricity. While the form-following-function aesthetic may be challenging from some angles, the unusual rear-end of the Mirai bears a strong family resemblance to that of the fourth-generation Toyota Prius so expect it to become a familiar site on Britain's low-carbon roads, especially in and around London. Toyota is, quite simply, the world authority on quality car-making so the reliability of the all-new Mirai model is second to none.

The Mirai is aimed primarily at the fleet user and particularly at business leaders who take the issues of environmental responsibility seriously. The price of the car pitches it against the BMW 5-Series hybrid but with other credible hydrogen fuel-cell offerings from Honda and Hyundai, the Mirai is being kept honest, offering high levels of refinement and equipment to justify the high price. Initially, the Mirai is only available as a four-door, four-seat saloon but variations may begin to appear as the model catches on, as we have seen with the Prius which is now offered in three variants. Given the technological innovation associated with the Mirai, the standard equipment list includes many hi-tech systems like Bluetooth, DAB radio, a USB socket and SatNav, but look out for less obvious features like the windscreen wiper de-icer, Rear view camera, and that wireless smartphone charger. For family users, the ISOfix system allows easy fitting of a child-seat in the rear, and all round airbags will help keep the whole family safe should anything untoward happen. The safety of the fuel system has been scrutinised and Toyota have developed ways to prevent any dangerous situations that result from filling and storing hydrogen.

At £66,000 the Mirai is an expensive car to buy outright. Early customers are encouraged to choose the more affordable lease option, at £750 per month over four years. Once acquired, the low cost of ownership really starts to make the car's purchase price more palatable. You'll pay no vehicle excise duty, or congestion charge, and have access to schemes aimed at zero- and low-emission vehicle owners. Additionally, with Toyota's reputation for exceptional build quality, breakdowns and parts failures will be few and far between. You can expect to pay around £50-£60 for a full tank of Hydrogen, and that tank will take you around 310 miles. This works out at an equivalent 67mpg. The Hydrogen filling station network in the UK is being developed along key motorways and cities to make sure long journeys are possible. Refuelling takes about three minutes. Depreciation will be rapid on early models as the high list price of the innovative vehicle does not equate to the market value of the used car, but this is where the lease programme will make a lot more sense for first customers. This means the Mirai will be a sensible choice for business users and company fleets.

Named after the Japanese word for The Future, the Toyota Mirai marks the start of a new way of motoring. The four-door, four-seat saloon will come into its own as the Hydrogen re-fuelling infrastructure expands but, with a concerted effort from government and industry, that future is fast becoming a reality. A car that brews its own electricity, on-board, is a huge step forward in the quest for convenient, green solutions to deal with the scarcity of oil. The Toyota Mirai comes at the right time, as motorists look beyond traditional ways of running a car. All this technology comes wrapped in a cutting-edge design, and provides the platform for a smart family saloon with class-leading quality. It may be in the Early Adopters phase for a while, but with powerful customers like Transport for London taking on a fleet of them, the Toyota Mirai's future is looking positive.