Why Lease the Audi A3 Cabriolet? 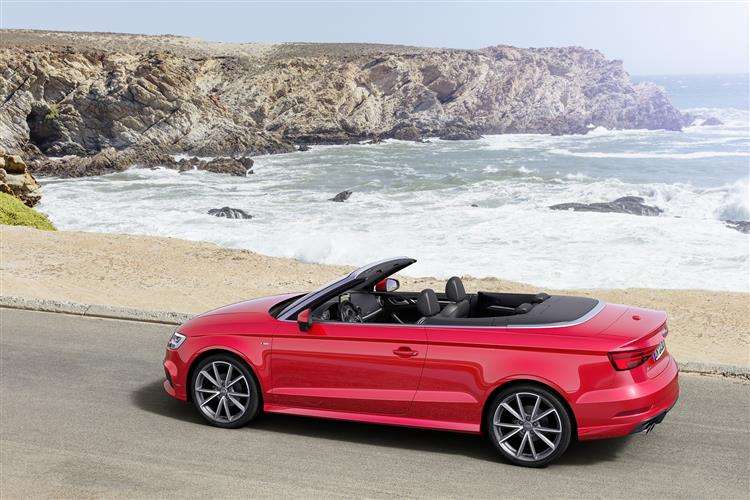 Audi pairs one of its very best diesel engines with the wholly lovely A3 Cabriolet body. The 184PS diesel unit is offered in two specific guises; a front-wheel drive manual car or a quattro all-wheel driver model with the S tronic twin-clutch transmission. It's a great package but it's not cheap.

Small convertibles are a genre of vehicle that it's easy to deride. They're frequently poor, sold to buyers who are merely interested in looks, and as such tend to have a distinctly superficial depth of talent. This class of car is where tired old chassis and engines go to die. Then there are drop tops like the Audi A3 Cabriolet. In truth, the open-topped A3 didn't need to be half this good, but it's looking to appeal to a whole new class of buyer who might not have ever considered a soft top previously. Bolstering the A3 Cabriolet's argument is the inclusion of a rather special 184PS version of the 2.0-litre TDI diesel engine. Here you get ample power and torque, backed up by decent refinement and excellent fuel economy. It makes a compelling case for itself.

The 184PS engine that's shoehorned under the bonnet of the A3 Cabriolet is something we've seen before powering the A3 hatch and it's an engine that doesn't brook too much in the way of complaints. It's the first A3 Cabriolet to offer the option of quattro all-wheel-drive. Buyers choose between a front-wheel drive version with a six-speed manual transmission or the quattro chassis with a six-speed S tronic twin-clutch transmission. In manual, front-wheel-drive form, top speed is pegged at 150mph and 62mph arrives in just 7.9 seconds. Go for the quattro version with the S tronic box and the sprint falls to just 7.6 seconds, while top speed is shaved a little to 147mph. Like the rest of the A3 Cabriolet range, this chassis is significantly longer than its predecessor's and is of a completely different design. There's an electromechanically assisted steering system and a next-gen stability control package which includes an electronic limited slip differential for composed deployment of power. The optional Audi drive select system lets the driver vary the throttle response, steering weighting and, where the S tronic transmission is present, the gearbox shift points. What's more, it can also be upgraded to manage the optional Audi magnetic ride system with its clever magneto-rheological fluid-filled dampers.

Built on a modified version of the A3 Saloon's chassis, the A3 Cabriolet has lost its somewhat dumpy, pram-like styling. It looks a more elegant thing now, thanks to that increased wheelbase. To achieve its sleeker profile and provide the capacity for complete soft-top concealment when in open mode, it's needed to let its belt out considerably. Compared to the previous model its length has increased from 4.24 to 4.42 metres, the wheelbase from 2.58 to 2.60 metres and width from 1.77 to 1.79 metres. Only its height (1.41 metres) is down on its predecessor, by 15 millimetres. Luggage capacity has also grown by 60-litres (2.12 cubic ft), and access to that space has been improved. The A3 Cabriolet has a soft fabric roof that is stretched over a magnesium-steel 'skeleton'. The roof opens or closes electro-hydraulically in less than 18 seconds at speeds of up to 31mph. When retracted, the top - folded into three layers - rests in a tray that barely affects luggage capacity, which is 287-litres (10.14 cubic ft). There's a proper glass rear window and the roof can be specified in black, grey and brown - while the inner liner is available in black or lunar silver.

The 184PS version of the A3 Cabriolet is offered in two trim variants, Sport and S line, starting at £29,735. Sport specification elements include 17-inch alloy wheels, 15mm lower sports suspension which can be 'de-selected' in favour of a more comfort-oriented standard set-up if required, Audi drive select, aluminium interior details and front Sports seats. Highlight features of the top S line model include distinctive and exclusive S line exterior styling, 18-inch five-spoke alloy wheels and Xenon plus headlights with LED daytime running lights as standard. The top-spec S line quattro with S tronic transmission will set you back £34,925. Why no folding metal hard top, especially when you're that sort of money? The reason is because this car is better without one. It's lighter, with the car tipping the scales at about 50kg lighter than its predecessor, the entry-level version weighing 1,365kg. The hood is beautifully engineered so it's easy to appreciate what your money's been spent on. The fully automatic acoustic hood has a thicker inner foam layer which further reduces the already low interior noise level of the A3 Cabriolet. A wind deflector and head-level heating for the front seats are also available. An active rollover protection system consisting of two spring-loaded plates that are recessed into the body protects the occupants in case of a rollover accident.

For an engine that develops a hefty 380Nm of torque, the 2.0-litre TDI 184PS unit gets some cracking economy and emissions figures. In manual, front-wheel-drive form it'll return an impressive 65.7mpg on the combined cycle, while emitting just 114 grams of CO2 per kilometre. The all-wheel drive S tronic version will manage 56.5mpg with emissions rated at 132g/km. The A3 Cabriolet's work on weight reduction is evident in the most unexpected places. The bonnet, for example, is all aluminium. The engines weigh less than before as do the seats and the dashboards. All of this has incremental effects on emissions and economy. All engines employ direct injection and turbocharging and are backed up by a start-stop-system. Residual values may well even improve on the old A3 Cabriolet's due to the later car's improved practicality and broader appeal.

There's something that's unexpectedly beguiling about combining this solid, meat and potatoes powerplant with a body that smacks of purest indulgence. Call it a way of salving your conscience if you will, assuaging the guilt of possible ostentation maybe, but it's a combination that works, without overloading your palate. The 2.0-litre TDI engine is muscular and economical and there's something to be said for both chassis/gearbox setups. The rest of the package is very special; a car that's improved beyond all measure compared to its dumpy, pram-like predecessor. Just about the only caveat that might be mentioned is pricing. The 184PS car isn't cheap and when it's paired with the quattro transmission and S-tronic gearbox it starts to edge within £4,000 of the asking price of the ballistic 300PS S3 Cabriolet model. Will buyers cross-shop between these two cars. They just might.