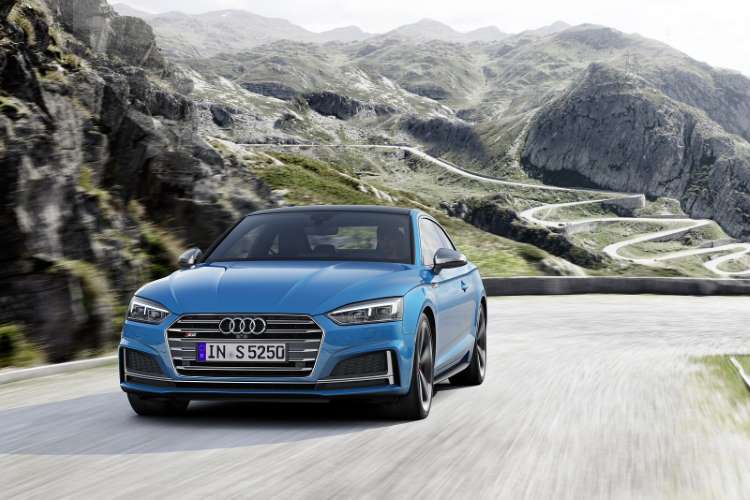 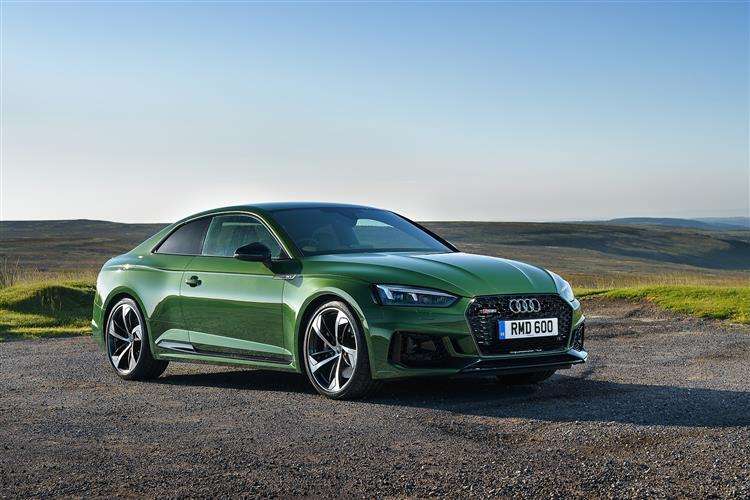 RS5 Coupe The Audi RS5 Coupe has an impressive power that matches its beautiful design. View All Cars > 4 Cars Available 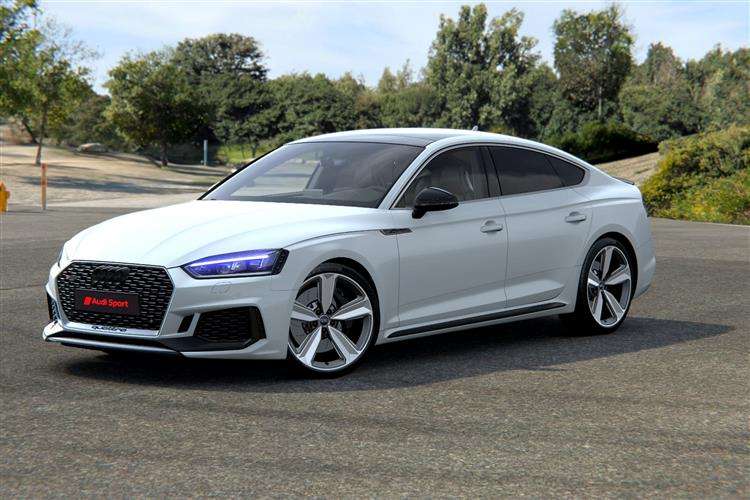 Why Lease the Audi Rs5? 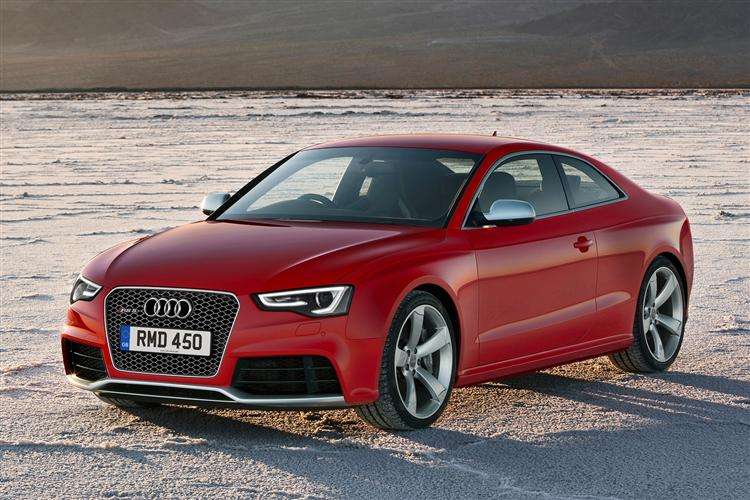 Fast, frantic but perfectly practical, the Audi RS 5 Sportback aims to be the market's definitive mid-sized high performance five-door hatch. It gets a sophisticated quattro 4WD system and can hit 174mph on the Nurburgring but is just as happy collecting your dry cleaning. The spec of this revised version looks impressive, including an RS sport exhaust system and a sport differential. You only truly get a sense of just how fast it is by following behind in something else.

If you know your fast Audis, you're probably familiar with the RS 5 model - as a Coupe. Here though, the Ingolstadt brand's 'Audi Sport' division has taken that model's potent twin turbo V6 and installed it into the company's Sportback five-door coupe body shape for a bit of added practicality. It targets similarly-performing mid-sized models like the Mercedes-AMG C 63 but brings a key advantage - Audi's quattro 4WD system which is mated to a stiff, light MLB platform. Plus buyers get a standard rear Sport differential to help get the torque to the tarmac through the turns. This car was first launched in 2018, then lightly revised to create the car we're going to look at here.

Not a lot prepares you for just how quick this car really is. To be specific, rest to 62mph here occupies just 3.9s, which is a fraction quicker than you'll go in what is arguably this model's closest rival, the Mercedes-AMG C 63 Estate. As usual with fast Audis, the maximum speed is rather pointlessly capped at 155mph, though in this case, you can pay Ingolstadt an obscene amount of money to get the restrictor lifted, in which case your RS 5 Sportback will top out at 174mph. The creamy, rather digitalised engine soundtrack you get as the revs rise from the 450PS 2.9-litre V6 isn't a match for Audi's old 4.2-litre V8. After a while though, you rather warm to the way that this Porsche-developed powerplant snarls purposefully on up-shifts and lets out little pops and bangs as you snick the steering wheel paddle shifters down through the closely-stacked ratios of the 8-speed Tiptronic gearbox. This RS 5 certainly tackles the turns effectively. Part of that is down to the re-developed quattro system which usually directs 60% of torque to the back wheels but, if conditions demand, can send up to 85% of power to the back or, if necessary, as much as 70% to the front. The set-up's been designed to work with a torque vectoring system that applies minimal brake interventions to the wheels on the inside of any given curve before they start to spin, maximising traction and making handling more precise, agile and stable. Also playing its part here is the standard-fit 'sport differential' which at speed through tight corners can constantly vary the amount of torque distributed to each of the rear wheels.

The exterior design of this RS 5 Sportback is a blend of elegant curves and taut, athletic surfaces. The longer wheelbase, short overhangs and long, wraparound bonnet with power dome all help to signal intent, as do the characteristically powerful shoulder line and the quattro blisters in the flanks which emphasize the strong bulges over the extended wheel arches. At the front, the car features a wide, flat single-frame grille, solid air intakes with a honeycomb structure typical of an RS, gloss black design elements and a front spoiler with matte aluminium quattro lettering. At the rear an RS-specific diffuser insert, RS exhaust system with oval tailpipes and fixed spoiler lip further distance the car from its A5 series siblings. Inside, you get RS sport seats in Fine Nappa leather with honeycomb stitching, a flat-bottomed RS multifunction sports leather steering wheel and a special RS information display in the standard Audi virtual cockpit providing information on tyre pressure, torque and G forces. The cabin provides space for five people, and the square-shaped profile of the luggage bay with its useful width of exactly one metre allows passengers to make the most of the 480-litre luggage capacity. Folding down the rear seats with their 40:20:40 split ratio increases that to 1,300-litres.

You'll need around £69,000 for the RS 5 Sportback, the same amount that's necessary for the alternative two-door Coupe variant. Both come only in fully loaded 'Audi Sport Edition' trim. That gets you large 20-inch alloy wheels with an anthracite finish, privacy glass, high gloss black exterior elements and an Audi Sport exhaust system to amplify the engine's soundtrack. Inside, you get Fine Nappa leather and Alcantara combination upholstery with contrast diamond stitching for the RS super sports seats, plus Piano Black inlays and a panoramic glass sunroof. In addition, there's all-LED lighting and the fully digital Audi Virtual Cockpit instrument display screen with RS-specific displays. You also get driver safety elements including the Audi side assist blindspot monitoring system, Audi hill hold assist and the parking system plus. Plus a comprehensive range of infotainment choices is sure to keep everyone on board entertained. The optional 'MMI navigation plus with MMI touch' infotainment system includes the hardware module 'Audi connect', which connects the car to the internet via LTE. Thanks to the Audi connect SIM, which is permanently installed in the car, the flat rate data package for the connect services including Europe-wide roaming is free of charge for three years. The Audi smartphone interface uses Apple Car Play and Android Auto to make selected apps available in a separate MMI menu. Control is easy and intuitive, thanks to natural language voice control, free text search and the multifunction steering wheel. The touchpad in the centre console is used to zoom, scroll and enter characters. Further high-end technologies, such as the head-up display and as many as 30 driver assistance systems enhance safety, comfort and efficiency.

This RS 5 won't be quite as costly to run as you might expect a 450PS performance hatch to be. This is thanks to a 17% improvement in running costs compared to the previous V8-engined model. Expect around 32mpg on the combined cycle and around 200g/km of CO2, which isn't at all bad for a performance five-door model with this level of performance. Apparently, the 'B-cycle combustion process with central direct injection' engineering approach used with this car's 2.9-litre biturbo engine represents a super-high level of efficiency among the RS models. The shortened compression stroke employed here enables an engine process with a significantly higher geometric compression ratio. Combined with a power stroke that, while normal, is longer relative to the compression stroke, so allowing for more efficient combustion and increased engine efficiency. Another factor in the surprising efficiency of this RS 5 is its relatively low weight. On to the warranty. All contenders in this class get three years of cover but whereas you won't get your mileage limited in this period if you opt for something made by BMW or Mercedes, Audi rather meanly restricts you to 60,000 miles. Optional extra-cost warranty packages can extend the cover to either four years and 75,000 miles or five years and 90,000 miles.

Would this car sound better with Audi's old 4.2-litre V8? Probably. But there's little doubt that the V6 Porsche powerplant used - though less aurally emotive - has more real world punch. Which seems appropriate in such a resolutely real world performance car. Is it perfect? No of course it isn't. But what other high-performance four-wheel drive mid-sized hatch of this sort is there to challenge this one? The closest thing the market has to offer, a rear-driven Mercedes-AMG C 63 wagon, wouldn't give you the all-round grip and really needs a dry racetrack and a licence to burn rubber if it's to appeal over an RS 5 Sportback. As for a high performance SUV, forget it: you'd be all over the place just trying to keep this Audi in sight. Drive it and you'll experience a slightly guilty thrill as if something this much fun really couldn't be legal. One day cars like this might well be legislated out of existence. In the meantime, enjoy this one while you can.