How The World's Roads Changed In 2020

Vanarama has analysed traffic data across 10 of the world's busiest cities to visualise the impact that Covid-19 had on our roads.

We have created a series of videos that compare a working week at the height of the global lockdown (w/c April 20th) with the same dates in July as restrictions ease.

But first, how much time have commuters across the world saved not sitting in traffic since initial restrictions kicked in?

How Much Time Have We Saved By Not Commuting?

As many countries saw lockdown measures in varying severity continue over the course of five months (March through July) and for many beyond, here is how that translates into time savings for those that have been working from home rather than commuting into some of the world's busiest cities.

These time savings were calculated and averaged between Inrix and TomTom data on the annual average time spent by drivers in traffic by city.

Everyone's complained about how long their trips to and from work take at some point or another but seeing how much time is saved by not getting stuck in traffic may surprise even seasoned commuters.

The stand-out is clearly New Delhi where over 3 days-worth of time has been saved during lockdown. Scaling this upwards, that means around 8 days across the year is spent rush hour traffic per driver.

This lack of traffic has had an unprecedented effect on air quality, with cities like New Delhi, São Paulo and Beijing having the clearest skies in recent memory with pollution rocketing down alongside car use.

Now we've looked at the (sometimes staggering) savings in hours, let's see how the flow of traffic has changed across the duration of lockdown measures, from the lowest point in April – to the gradual recovery being seen throughout July ahead of August's re-lockdown measures.

Paris saw one of the most dramatic year on year drops in traffic during early 2020 with April being 89% less congested on its roads than in 2019. Not that drivers tired of being stuck at a standstill would be complaining as 69hrs per motorist has been saved by those who avoided the roads from March to July that would otherwise have been spent in traffic. 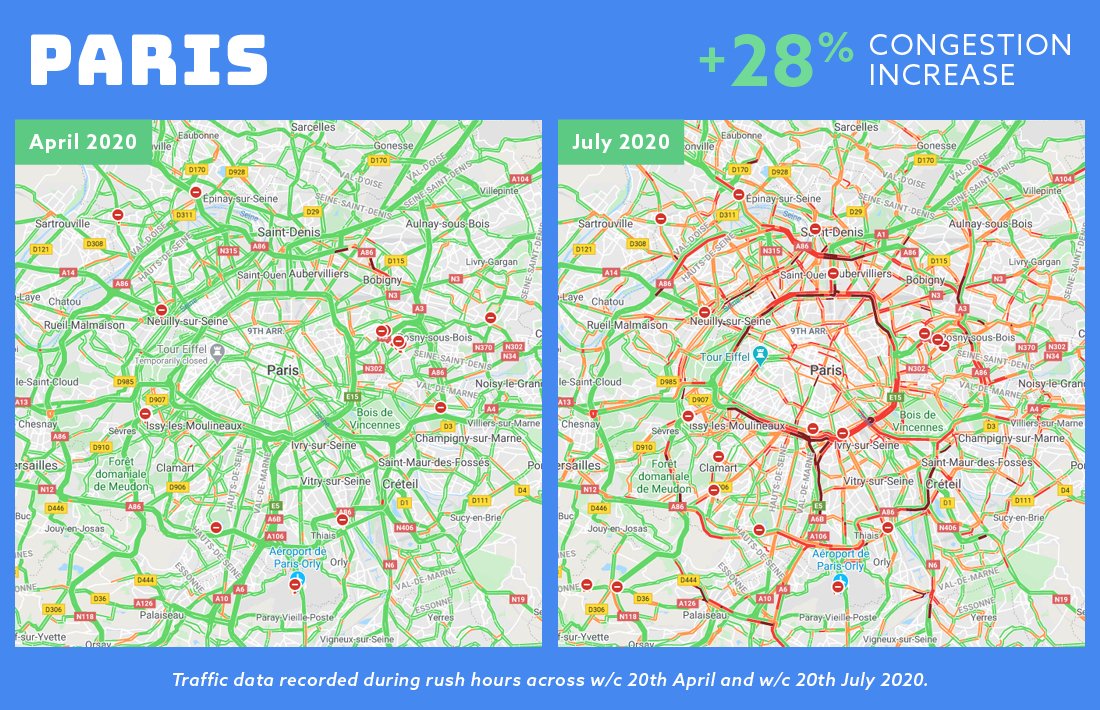 However, since lockdown restrictions began to be lifted throughout June, it didn't take long for Parisians and out-of-town commuters to get back to business with traffic levels rising by 28% since the height of restrictions.

To think of New Delhi usually conjures up images of huge crowds and packed roads but 2020's events transformed it into a veritable ghost town with a mind-blowing 90% reduction in congestion when compared to the previous year. 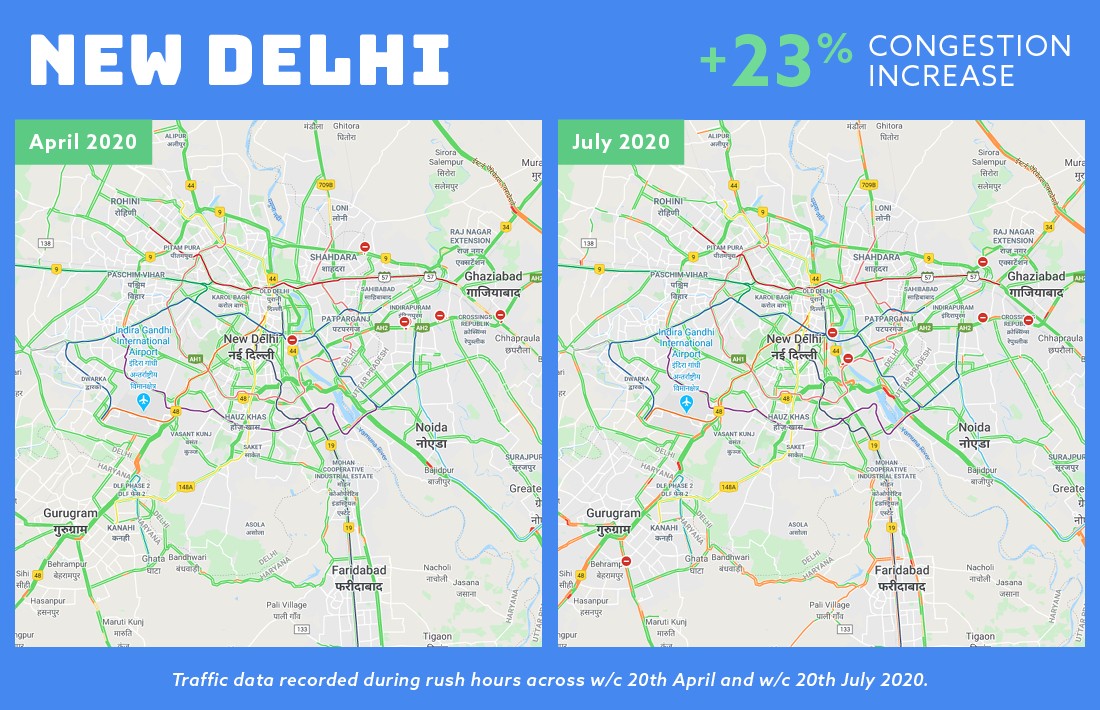 It seems like people are anxious to get back to business as usual in India's capital, however, as traffic has risen by almost 25% between April and July.

Usually gridlocked from morning to night, it was a strange sight to see the roads of the UK's capital so empty. During the height of lockdown in April, London's congestion levels were down to 8%, a stunning 76% lower than the same time in 2019.

However, since many restrictions have been lifted – it hasn't taken long for streets to start to pick up again with a** 17% **jump in traffic from the lowest point in April to July. 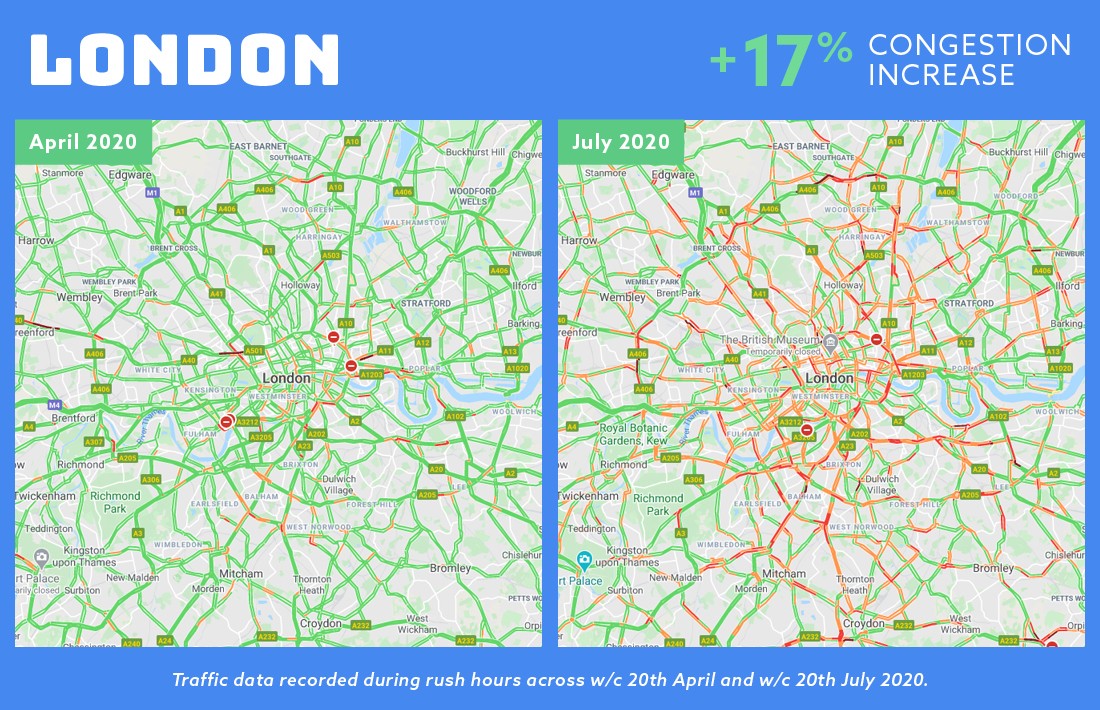 That's not to say there haven't been upsides for those used to driving into London for work, since restrictions began each commuter will have saved themselves 62hrs and £484-worth of being sat in traffic.

It's hard to imagine The Big Apple not being bumper to bumper throughout its packed grid of streets but during April 2020, there was a shocking 94% less traffic congestion than the previous year. 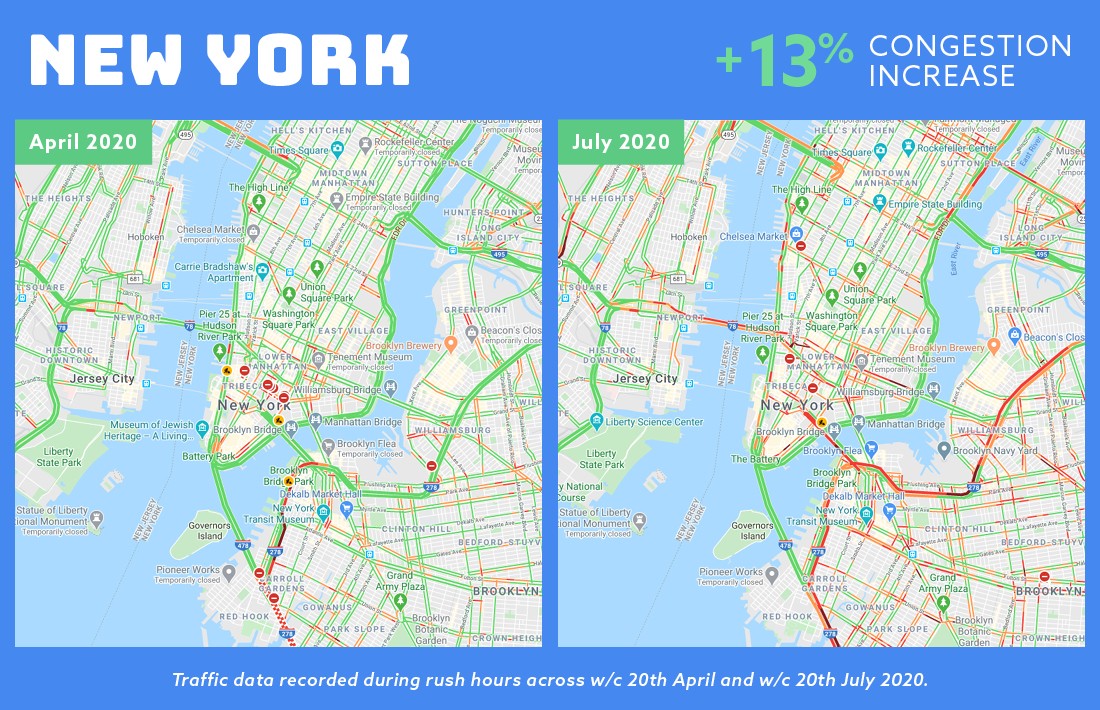 If there was any good news to take from the situation, it was that those who stuck to the stay at home guidelines will have gained back, on average, 58hrs and saved up to **£681 **that would have been spent simply sitting in traffic during rush hours from March through July.

Berlin almost halved its traffic levels when Germany's lockdown restrictions were at their most rigorous, with a 47% drop from April 2019. It seems that confidence is rising, even if it's a bit slower to do so than other cities, with a 12% rise in traffic as people try to get back to normality through July. 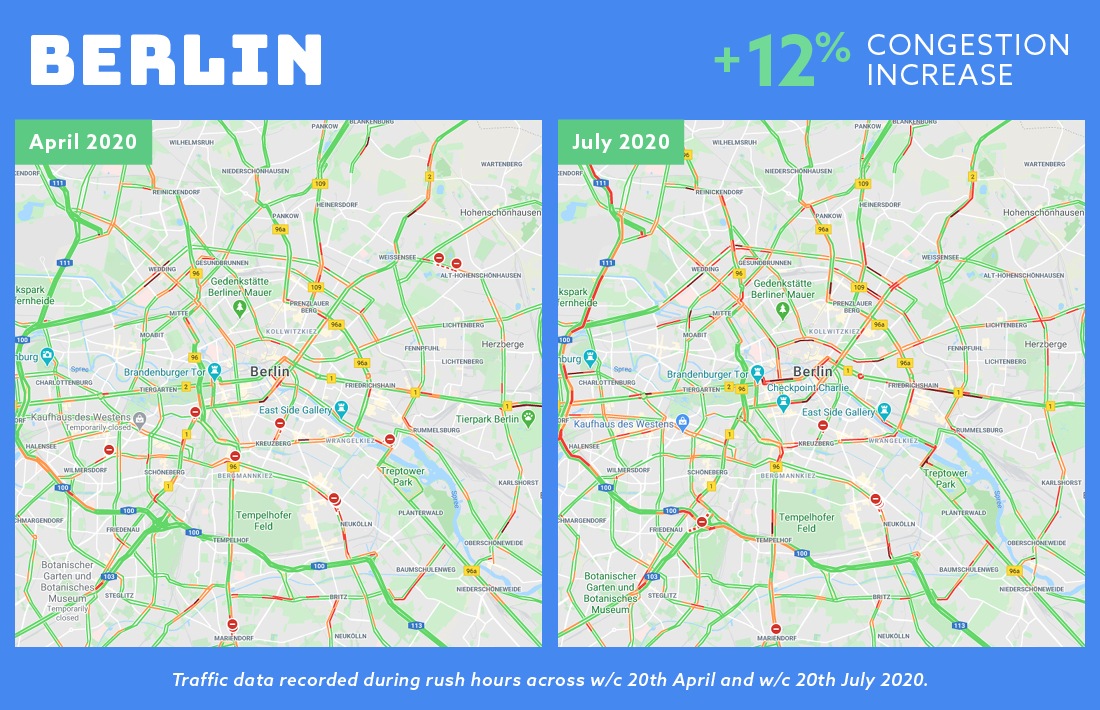 For the Berliners that chose to avoid commuting through city congestion since the beginning of lockdown, this translates into 28hrs and £221 in time and money saved.

The traffic levels in Tokyo dropped by 42% in April 2020 when compared to the previous year and have already climbed back by 10% as the global lockdown measures ease off. 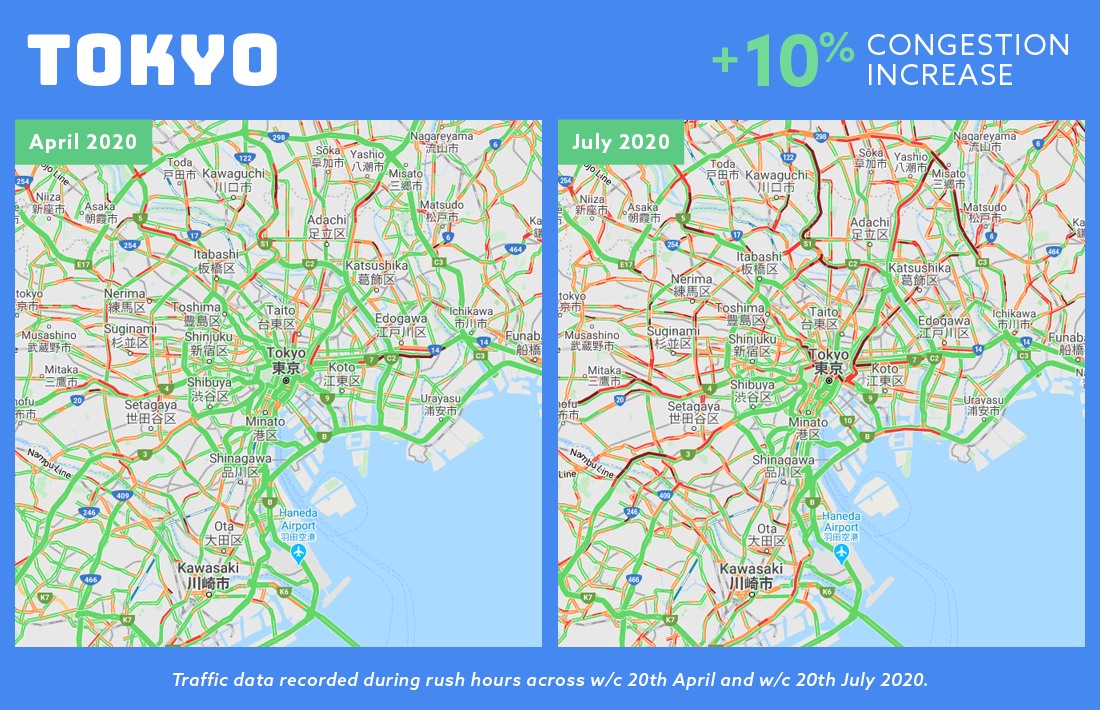 Despite it looking like there's a shift back towards normality it's worth noting that, from March to July, Tokyo residents that have decided against driving will have saved 61hrs they'd usually have spent sitting in gridlock.

Capital of the People's Republic of China and home to more than 21 million, it's tough to visualise Beijing's roads not teeming with traffic. April 2020 saw congestion levels in the city down 61% from the year before as residents stuck to some of the world's strictest lockdown measures. 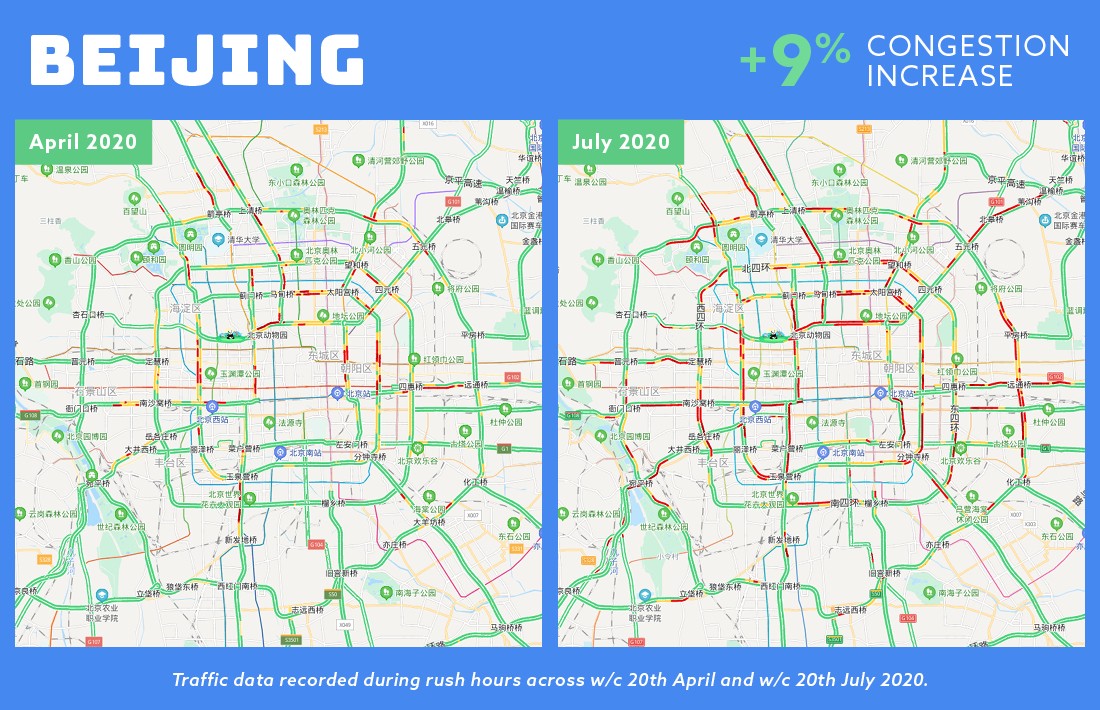 Since then, it remains one of the slowest to get back on the road with only a 9% uptick in traffic from April to July, showing that China is still being very cautious in its reopening.

Brazil has come under some scrutiny for President Jair Bolsonaro's laissez-faire attitude towards Covid-19 despite a huge number of cases, however, despite this - there have been some serious changes to the roads in their most populated city. 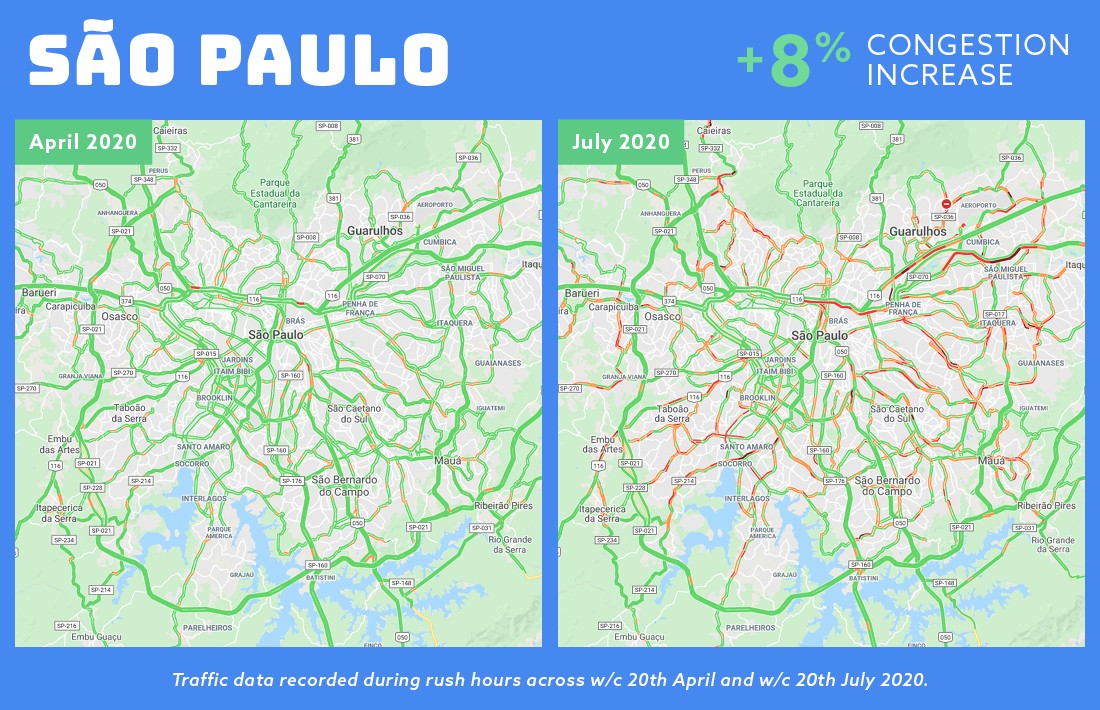 Congestion fell by a huge 77% from 2019 and, when compared to other global cities, São Paulo seems to have one of the least confident resurgences with only an 8% rise in traffic between April and July.

The City of Angels saw traffic fall by 80% in April and it looks like one of the least confident in getting things up and running again with a very conservative 7% rise in traffic through to July. That's not to say the difference in congestion isn't clear when sat side by side. 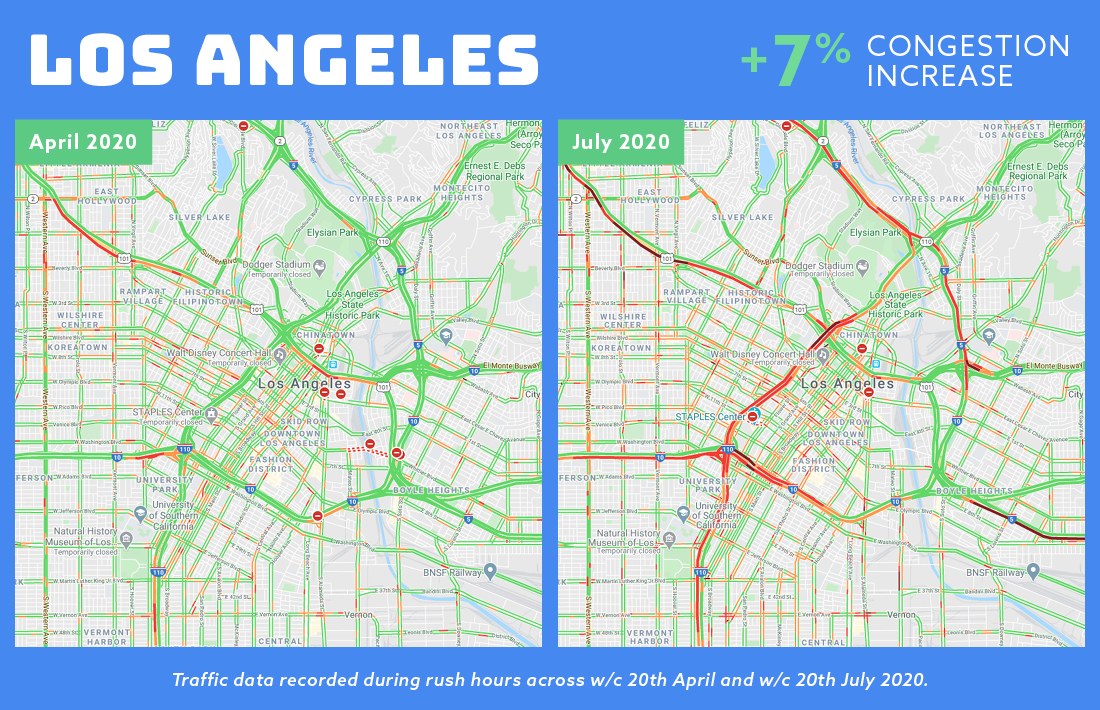 However, this makes sense when you consider that Los Angeles residents who decided against commuting by car from the start of lockdown will have gotten back 43hrs and £501 that would otherwise have been lost to rush hour traffic from April to July.

South Africa's largest city saw congestion levels drop to 10% during April 2020, a 69% drop from 2019 and one that saw dramatic changes to city centre roads. Aside from a large drop in traffic, Joburg is also notable for having the lowest road recovery between April and July at 6%. 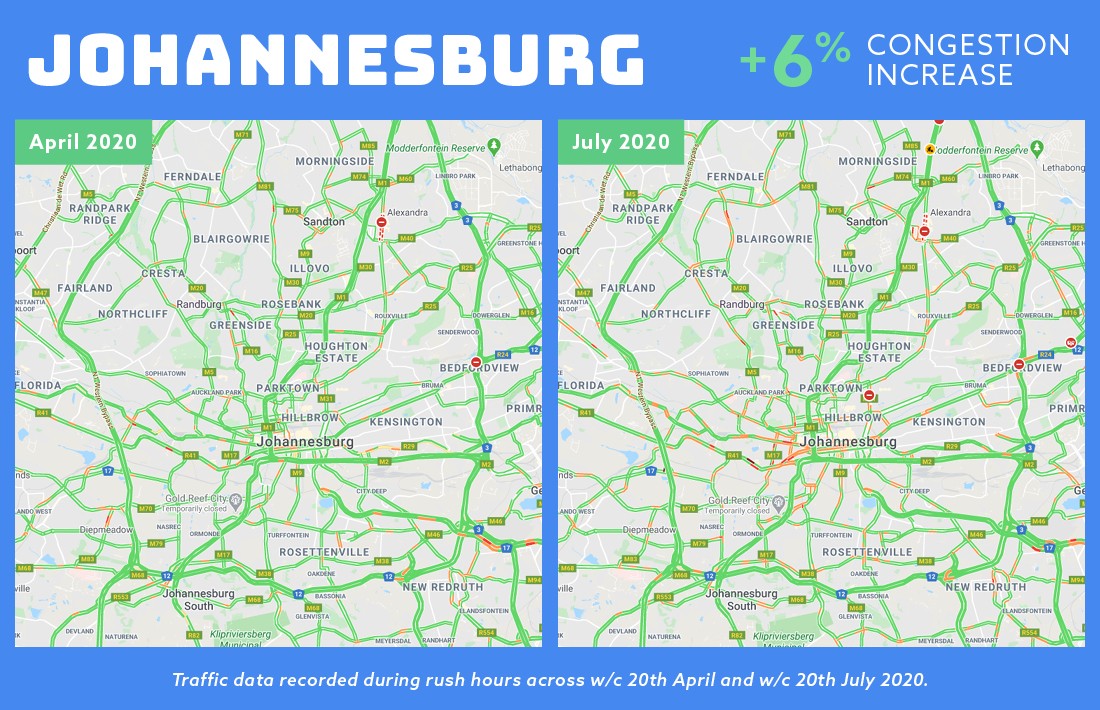 This is unsurprising as, out of the rest of the cities in our study, Johannesburg has been one of the areas hit harder later on despite earlier lockdowns meaning it's likely to take a bit longer to see a return to busy streets in The City of Gold.

While you're waiting for everything to get a bit closer to normality, why not check out the Vanarama blog? With articles on everything from the weirdest vehicle patents to slick visuals showcasing supercar soundwaves - there's plenty of automotive content to keep you busy. And don't forget to check out our latest van deals and car leasing options.