Head to Head – The Ford Transit and the Mercedes-Benz Sprinter

The large van sector. Although there are a number of manufacturers competing against each other with some very capable vehicles, the sales charts are dominated by just two contenders. Here, Vanarama’s Van Expert Tim Cattlin pitches them against each other in our head to head comparison.

So, you’ve decided to lease a decent sized van that will move a combination of volume and weight. After some research, you’ve narrowed down your choice to either a Transit or Sprinter. On the face of it, they’re pretty evenly matched. These vans are not market leaders for nothing. Having a reputation for great build quality, reliability and excellent dealer networks they’re known for being fit for purpose workhorses that will get the job done. But, let’s drill down into the detail and see where the individual strengths lie.

Ford and Mercedes-Benz make things difficult from the outset when it comes to comparing their large vans. The Transit is offered in 3 lengths (L2, L3 and L4) and the Sprinter in 4 (L1, L2, L3 and L4) but as these lengths are not ‘like for like’, we’re going to pop them into a table. The figures here refer to the maximum load floor lengths (not including any additional capacity that may be available through the bulkhead and under the seats).

So, the Sprinter has the edge here, offering both the shortest and longest van. It’s also offered in 3 roof heights compared to just 2 for the Transit, although the lowest Sprinter roof is only available with the L1 and L2 wheelbases (Still with us? Good). But how does this translate to load volume? The largest Transit (the L4H3) has a capacity of 15.1 cubic metres. You’d expect the longer Sprinter to have more space for your loads and you’d be right, the L4H3 offering a whopping 17.0 cu/m. 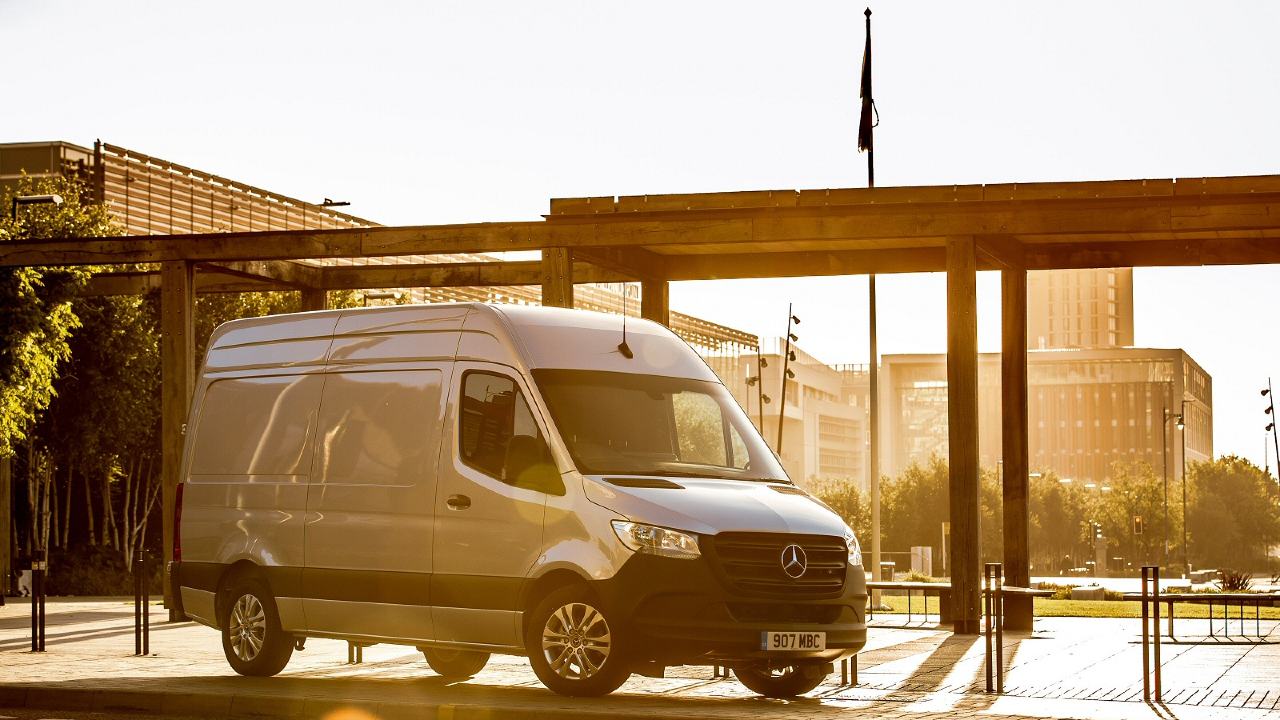 There’s more choice with the Ford when it comes to weights and payloads, the Transit being available at GVM’s (Gross Vehicle Mass) of 2900kg, 3100kg, 3300kg and 3500kg. The Sprinter has just the 2 options, 3000kg and 3500kg. There are heavier versions of both vehicles but due to the different driver licensing and operational legislation applying to vans over 3500kg we’re going to leave them out of this comparison.

How does this translate to payload? Clearly with many permutations of GVM and bodystyle there’s going to be quite a broad range, with the Transit van having payloads between 895kg and 1472kg and Sprinter around 842kg up to 1404kg. It’s important to remember that, due to their higher unladen weight the largest vans tend to have a reduced payload, the L4H3 Sprinter having a capacity of just 1000kgs. It’s very easy to overload a big van if you’re not careful.

Lots of options here from both manufacturers meaning that there should be something for everyone. Opt for the Ford Transit and, although the basic engine is the same, 2.0 litre ‘EcoBlue’ diesel unit, it’s offered in outputs of 105PS, 130PS, 170PS and 185PS. Torque output is just as important as power, and Ford claim that the 415nm produced by the 185PS engine is class leading.

The fully electric E-Transit is coming soon which, on paper at least looks to be a game changer, but for the moment anyone who wants a slightly greener Transit will have to make do with the mild hybrid (MHEV) option. Storing energy produced when the vehicle is slowing down to a dedicated battery, it is later released to an electric motor which assists the diesel engine, especially in urban environments. Modest fuel savings are claimed by the manufacturer.

The 6-speed manual gearbox can be substituted with a nice, 10-speed automatic unit and the van is available in front, rear or all wheel drive.

Go for the Sprinter and your engine choice is dictated in part by your choice from the front, rear or all wheel drive options. Overall though, there are 3 basic diesel units of 1950cc, 2143cc and 2987cc which have outputs of 143hp, 150hp, 163hp, 170hp and 190hp. Automatic gearboxes of 7 or 9 speed are available, again dependant on the engine and drive selected.

Want to go green? No problem with the Sprinter which is available in fully electric form right now as, yes, you’ve guessed it, the e-Sprinter. 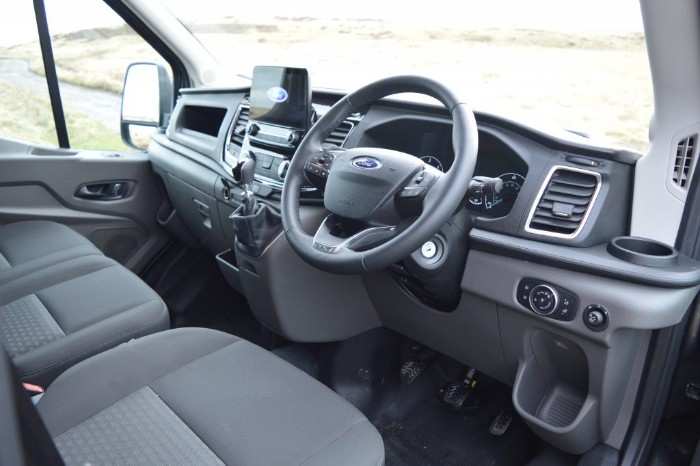 You’ve a choice of 3 mainstream trim levels on Transit - Leader, Trend and Limited plus the slightly more niche Trail model.

Although it’s the entry level model, Leader comes with a 4.2 inch multimedia screen giving access to the Ford SYNC suite including DAB radio and Bluetooth connectivity.  You’ll get power windows and some safety features such as side wind mitigation, curvature control and emergency brake warning.

Splash out a little bit more to upgrade to Trend and you’ll see the addition of parking sensors, power mirrors, automatic headlights and wipers, a heated windscreen and cruise control. Opt for Limited and alloy wheels and air conditioning are all yours, along with a body coloured front bumper.

Transit Trail is aimed at users who might want to venture off the beaten track a little. The bold F O R D grille is the giveaway and, in addition to the standard spec you get on Transit Trend, you’ll gain leather seats, black alloy wheels, air conditioning and, with FWD models the Trail has a limited slip differential whilst RWD variants are supplied with all wheel drive.

Until recently, the Mercedes-Benz Sprinter was only offered at 1 trim level but now you can choose between Pure, Progressive and Premium.

Pure has an advantage over Transit Leader by including the excellent Apple CarPlay / Android Auto smartphone integration into the 7” multimedia touchscreen. Safety tech such as attention assist, adaptive ESP, crosswind assist and active brake assist are included along with cruise control.

There’s not a big difference with Sprinter Progressive with just a few driver aids added, but the range topping Premium comes with wheel trims, air conditioning and a parking package. 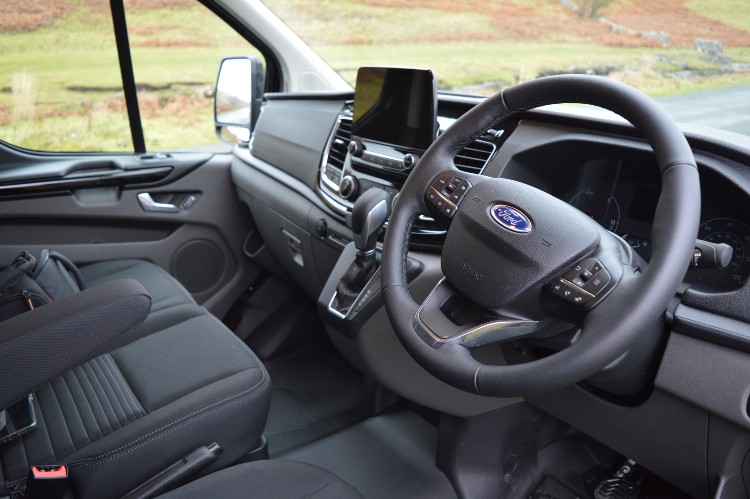 It’s the van industry buzzword now and most manufacturers are starting to build some sort of remote connectivity functionality into their new vans. Ford and Mercedes-Benz have been leading the charge and the Transit and Sprinter both come with some of the new tech.

FordPass Pro Connect is an integrated modem fitted as standard to the Transit. Working in combination with a smartphone app, it allows a remote operator to check on the vehicles health (tyre pressures, AdBlue level, and the time or distance to its next service etc), sending alerts if it spots a problem. You’re able to remotely lock or unlock the van and remote starting is available on some models. It can even alert you if an unauthorised person tries to access the van. The feature allows Ford to update the vehicles software remotely, keeping it bang up to date.

Previously called ‘Mercedes PRO Connect’ and now rebranded ‘Mercedes me’, the connectivity system is fitted to every new Sprinter and most services are free to use with no further subscription. Providing similar functionality to the Ford system, elements include advance notice of upcoming servicing requirements, remote vehicle diagnostics, over the air software updates, vehicle tracking, geofencing (with alerts if the van leaves a pre-defined area) and a location facility, handy if you’ve forgotten where you’ve parked it, even handier if it’s been stolen. As with the Ford, you can see the status of things like fuel level and tyre pressures and the van can be remotely locked or unlocked.

I’ve driven both these vehicles at length and there’s very little to choose between them. Both Transit and Sprinter are comfortable, quiet, well equipped and have efficient, economical engines which perform well. On paper too, it’s a tough call. Perhaps the Transit has the edge on equipment level but the range of body derivatives on Sprinter offer a wider choice. There’s a phrase that goes along the lines of ‘no fleet manager ever got fired for leasing a Transit’ but the 24/7 nature of the Mercedes-Benz dealer network (often attached to a truck dealership) could potentially minimise downtime. Whichever you decide, check out the latest Vanarama lease deals for the Mercedes-Benz Sprinter and the Ford Transit.

Related Articles
Top 15 Electric Van Terms Explained
EV jargon can often leave us feeling confused. Our van expert explains what these terms mean..Read More
When Is A Van Not A Van? And Why Does It Matter?
Vanarama’s Van Expert Tim Cattlin asks if there is actually a definitive conclusion...Read More
Ford Transit Custom PHEV Review
Our Van Expert Tim Cattlin got his hands on a Ford Transit PHEV & put this hybrid model to the test.Read More
We use cookies to improve your experience. Find out more in our cookie policy.