Best Cars Under £200 Per Month

For many customers these days, their monthly leasing outlay, not car size or genre, dictates the model they will choose. Let's say that you're fixed to an affordable budget – say up to £200 a month – and you want a choice of the best that will buy you. There's certainly a wide selection and you might need some guidance in narrowing your options down. So that's what we'll help you do here. 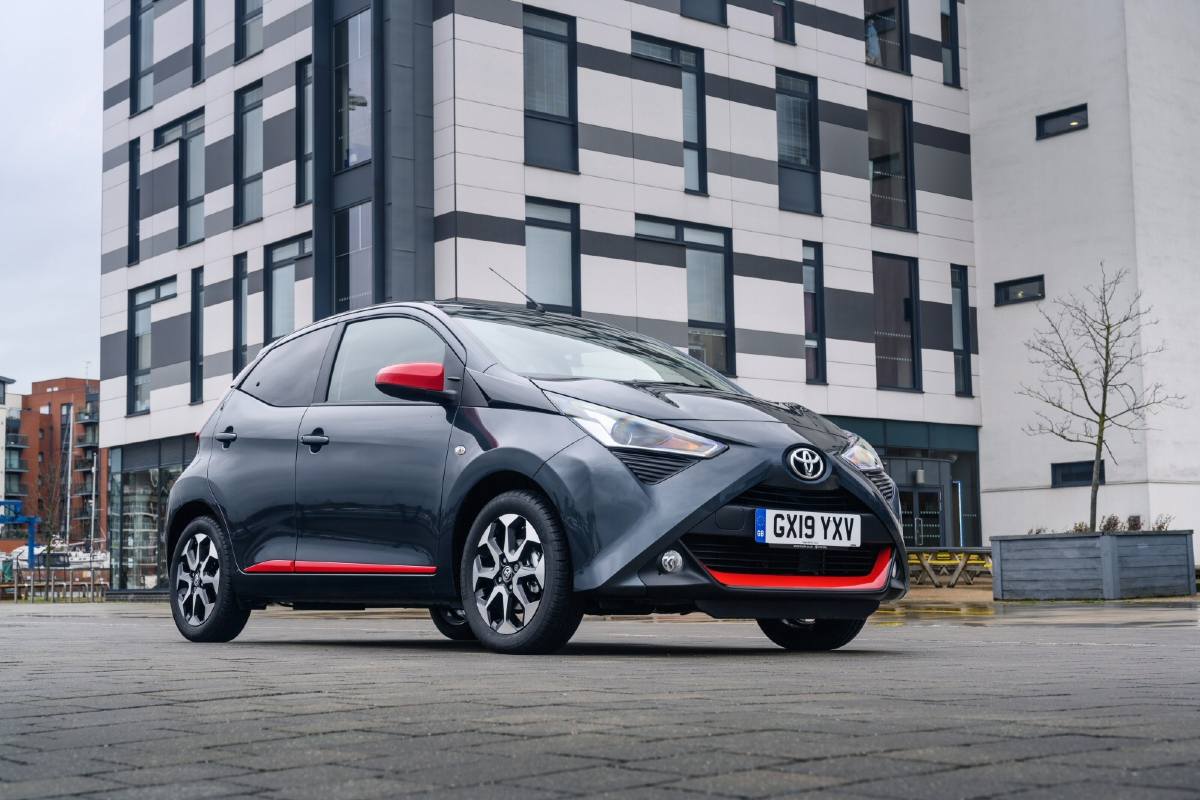 The fundamental elements of Toyota's Aygo may not be unique but the way they've been packaged certainly is. In second generation form, this little city car gained a bit more personality and attitude, an evolution built upon by this usefully revised version. It's more flexible to drive, more media-savvy, more…. Aygo.

There are lots of very capable city cars on the market, but not many that are visually distinct enough to stick in your mind. Rather cleverly, this Aygo focuses on exactly that approach.

Shared underpinnings with PSA Group models mean it can't be the most spacious or the most powerful car in the class, but it can offer the sassiest looks – and does. In a crowded marketplace, it's better to have a design that half your potential customers love rather than one that nobody objects to. Out back though, you'll need to pack fairly light. There's just 168-litres of space on offer.

As ever, the Aygo features a 1.0-litre three cylinder VVT-i petrol engine, though Toyota's keen to tell us that this unit's been extensively overhauled as part of the switch to Euro 6.2-specification. Lots of tinkering has gone into improving mid-range pulling power, which means you won't have to change down quite as often if you're darting for a sudden gap in the traffic. Plus pulling away in first and second gear is now slightly easier. Efficiency's better too. And of course, it's very affordable. In our 'Offers' section, you'll find that a 1.0 VVT-i X 3-door model on offer will come in comfortably below the £200 a month budget. 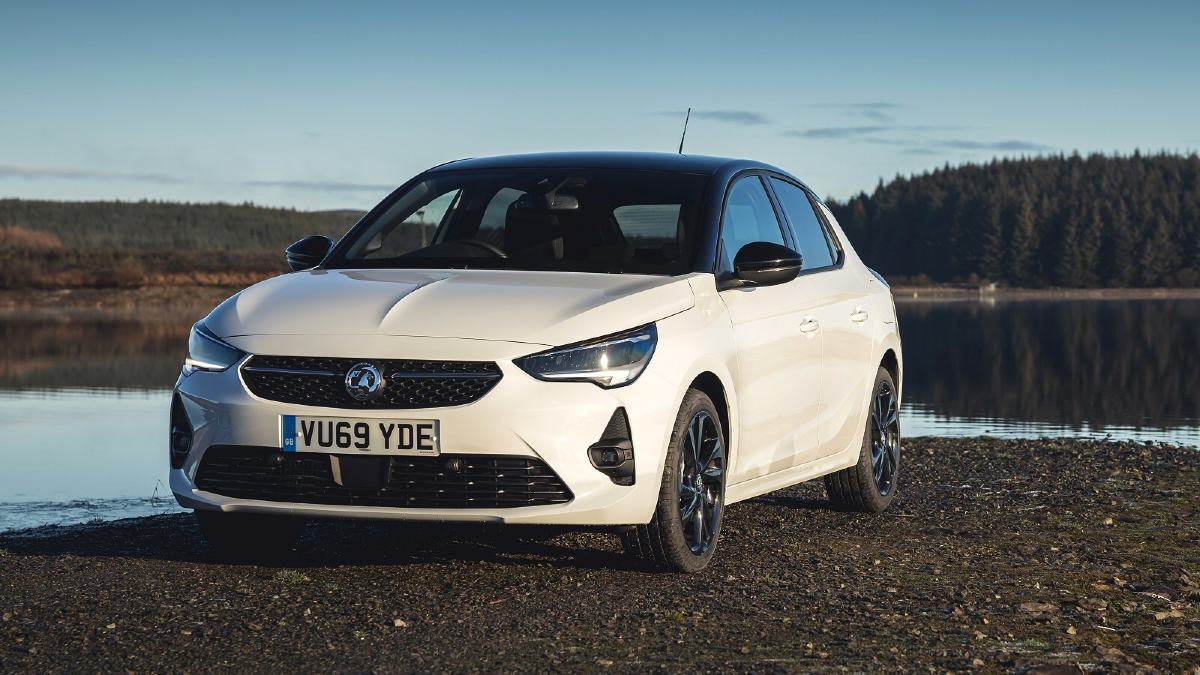 This fifth generation 'Vauxhall Corsa F' design is certainly very different from its predecessor. In terms of visual appeal, it's been described by Vauxhall as being less 'van-like' and if you come from the previous model, that'll certainly be your first impression, thanks to 39mm of extra length and a substantial 48mm reduction in roof height. It's certainly a more grown-up-looking car, with its smarter detailing, shorter overhangs and more vertical windscreen. And it now only comes with five doors.

This MK5-era Corsa starts off with a huge advantage over its predecessors: a much lighter CMP platform that's enabled it to lose a shed-load of weight in comparison to its direct predecessor – 108kgs to be exact. The front-of-cabin experience is much improved this time round, but rear seat space is quite restricted and the 309-litre boot isn't huge.

Engine-wise, we don't think your choice is going to be that difficult. You probably won't want a diesel – even though the 1.5-litre Turbo D unit, which puts out 102PS, is impressively efficient.

Ideally too, you'd want to look beyond the base petrol powerplant, a 75PS normally aspirated version of a three cylinder 1.2-litre engine that in this form doesn't have a great deal of pulling power. That same 1.2 unit's much better suited to this car in turbocharged 100PS guise, a form in which it manages to be very competitively clean and frugal. Our £200 a month budget easily gets you the plush 1.2 SE Premium version of this model. 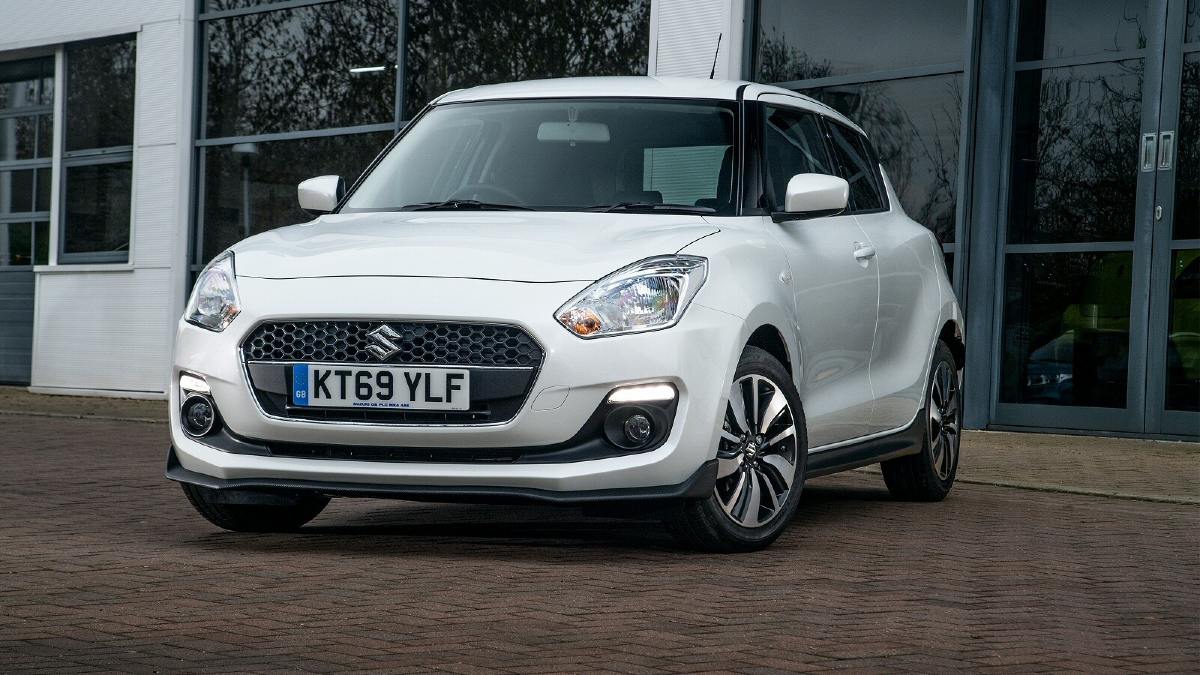 Unlike some of its competitors, Suzuki has never forgotten the essentials of supermini motoring. Such a car should not only be economical and as spacious as possible but also very affordable, endearingly charismatic and extremely light. Over five previous international generations, Suzuki Swift models have usually ticked these boxes and this MK6 version has done so again. It doesn't have quite as solid a feel as some class rivals, but there's plenty of equipment and an acceptably-sized 265-litre boot.

On the move, this current Swift isn't quite as agile and involving as some previous versions, but it can still be fun and rewarding in a way that few supermini rivals can match. The ride's not bad either, though perhaps inevitably, the unsophisticated suspension set-up is sometimes caught out by broken surfaces, tarmac tears and pot holes.

The stiff, sophisticated 'HEARTECT' platform that this car shares with its Ignis and Baleno supermini stablemates is a major contributor to this Swift's feather-light kerb weight. This in term means that small, relatively low-powered engines are all that's necessary to push this Suzuki along at a decent lick.

There are two units on offer, both petrol-powered, the range kicking off with a four cylinder 1.2-litre Dualjet petrol engine developing 90PS. Far better though, is the alternative three cylinder 1.0-litre Boosterjet powerplant that most Swift customers will choose. This engine compensates for its smaller size by the addition of a little turbocharger that pushes the output up to 111PS, and can be ordered with the option of a six-speed automatic gearbox.

Whichever of the two engines you choose, you'll have the chance to upgrade yourself to a version of your chosen unit fitted with the brand's 'SHVS' or 'Smart Hybrid Vehicle by Suzuki' technology. If you want the 'SHVS' set-up with the feebler normally aspirated 1.2-litre Dualjet engine, you have to have it mated to Suzuki's on-demand 'ALLGRIP' 4WD system. 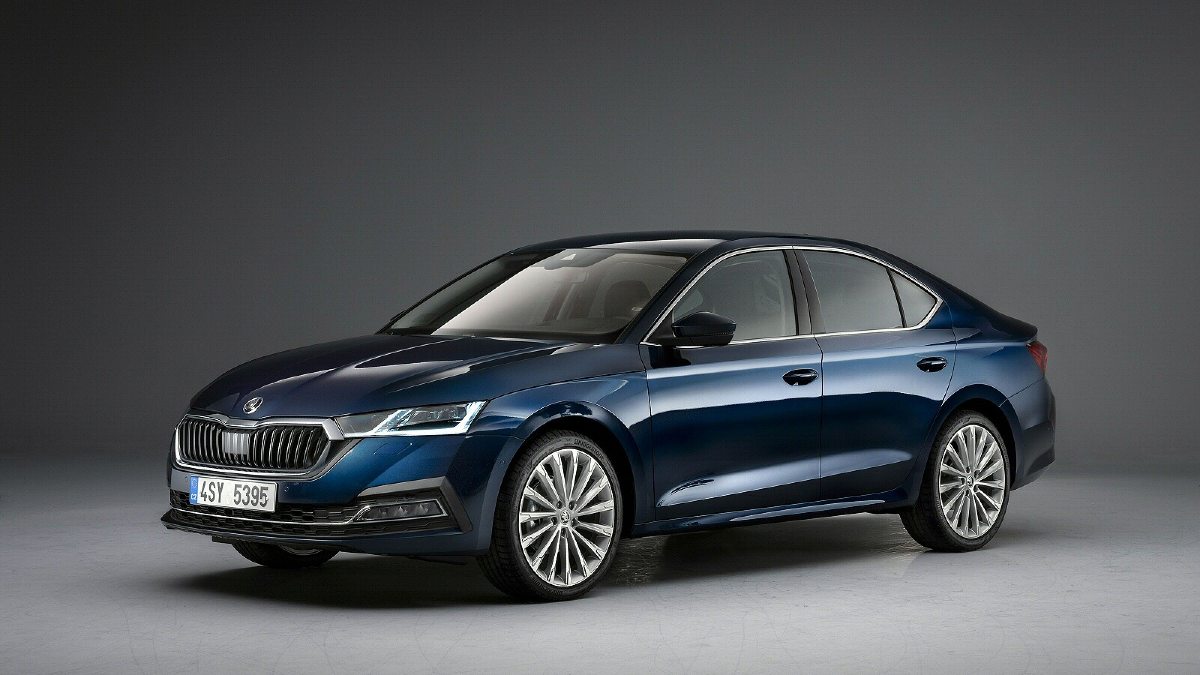 Yes, you can get something as large and spacious as a Skoda Octavia on a sub-£200-a-month leasing budget – or at least you can if you opt for the three cylinder 1.0-litre TSI petrol model, which can also be ordered with an optional DSG automatic gearbox and gets you the Czech brand's mild hybrid engine technology. The Octavia is a Golf-segment car with Mondeo-segment space, a recipe thoroughly embraced by this latest fourth generation model, offered as usual with a choice of hatch or estate body styles.

This MK4 design has taken a slight step up in size, the hatch version being 19mm longer and the estate variant 22mm longer than before. Inside, the cabin's now much classier and Passat-like, with most models getting a 10-inch central infotainment display.

As usual with the Octavia, a major selling point is interior space, especially in the back where there's the kind of legroom you might expect from a car in the next class up. Plus there's a big 600-litre boot in the hatch – it's 640-litres in the estate. Engine-wise, if you can afford a little more, there's a perkier 150PS 1.5 TSI EVO petrol engine. Or a 2.0-litre diesel with either 115 or 150PS. Plug-in hybrid options also feature further up the range. 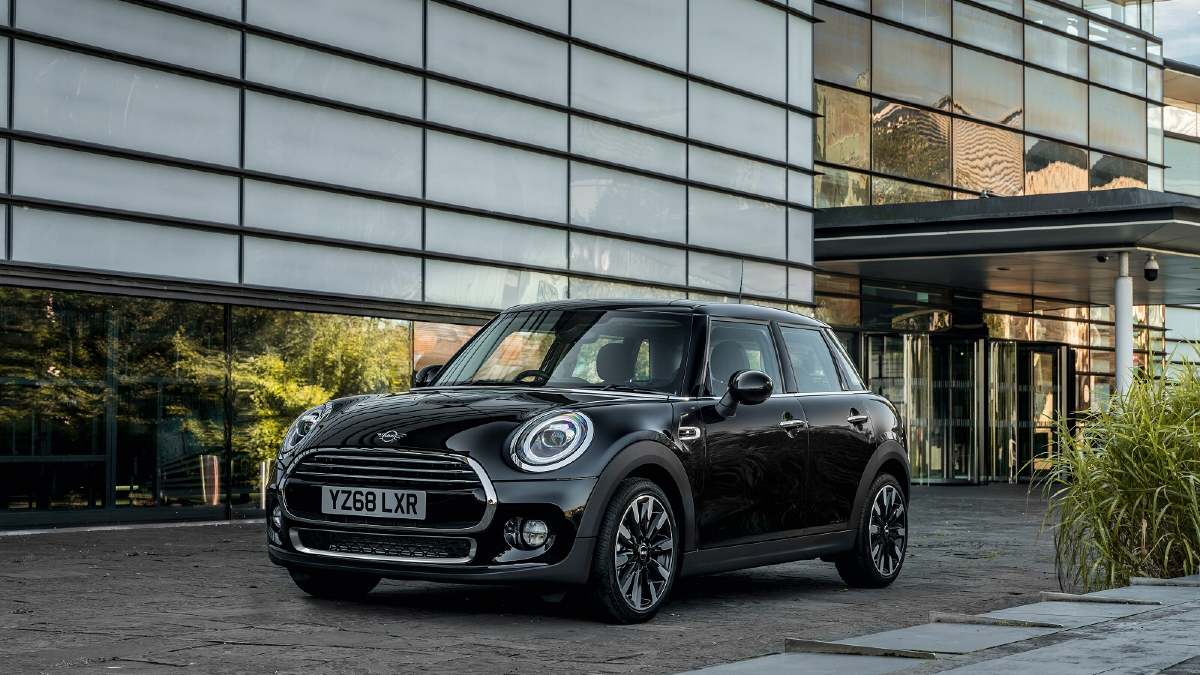 You might not have expected that a sub-£200-a-month budget would get you anything with a MINI badge but in our 'Offers' section, you'll find that a 1.5 Cooper Classic 3-door Hatch model can be yours for comfortably within that budget, even when fitted with the brand's optional 'Comfort/Nav pack'. As a brand, MINI has come to mean all kinds of things, but it's in its simplest 3 and 5-Door Hatch models that the company's products are most iconically recognisable. This third generation 'F56' design was first launched in 2014, but four years on was significantly updated to create the current car.

One of these just has to put a smile on your face when you drive it. If in a 3 or 5-door MINI Hatch, the overall feeling you're going to get is of just another supermini wearing a cute suit, you'd have to question this car's place in the overall scheme of things.

Fortunately though, this third generation 'F56' model still delivers the same infectious naughtiness that loyal owners love so much. There's still the same darty steering, the same quick-fire throttle. And, at least if you're not very careful when it comes to sorting out the spec sheet, still the same unyieldingly bumpy ride over poor surfaces. Both the base petrol models feature 1.5-litre 3 cylinder engines.

There's an entry MINI One model with 102hp, but you're probably going to want the 136hp Cooper version, which is the car we mentioned above. 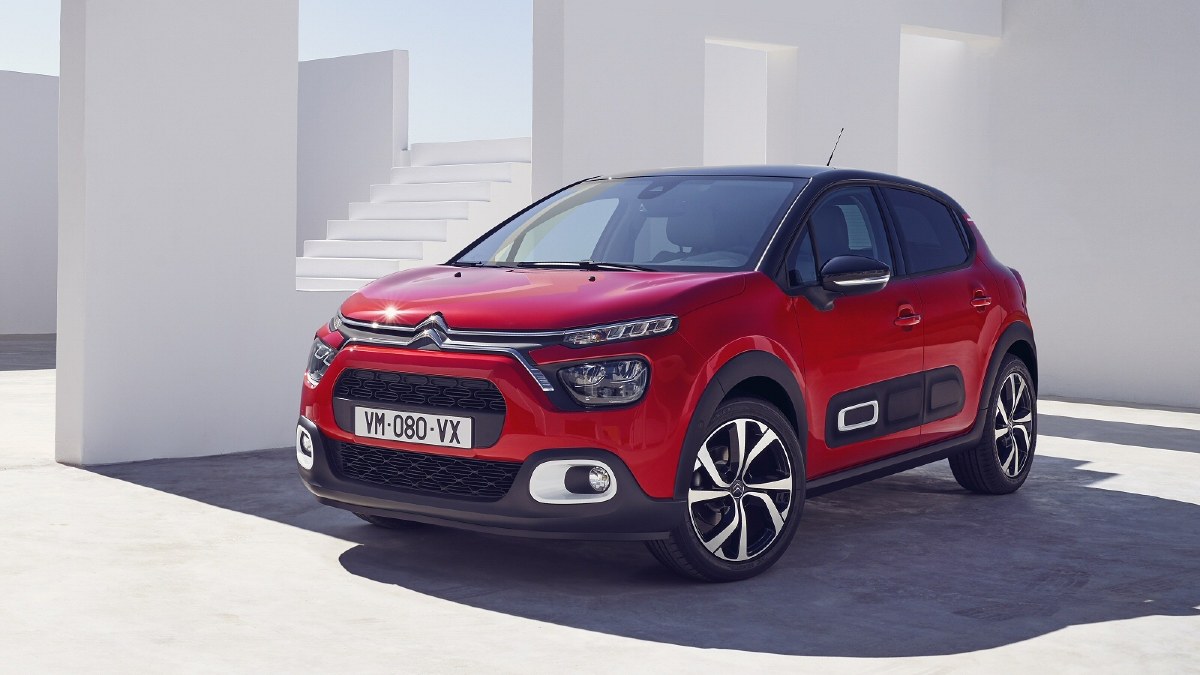 Citroën knows a thing or two about small family cars, especially those with a dash or two of character. Here, after all, is the manufacturer that over sixty years ago, brought us the iconic 2CV, a model which established its maker as an innovator, an embracer of technology and a brand in tune with the fickle finger of fashion. More recent products have struggled to live up to that heritage but this one, the third generation Citroen C3 supermini, promises to deliver everything a real Citroen should be.

It's recently been revised, with slightly smarter styling including sleeker headlamps with LED beams. Inside, the C3 now features the more supportive Advanced Comfort seats that were first introduced on this model's showroom stablemate, the larger C4 Cactus family hatch. Otherwise, things are little changed.

There's a restyled look for the 7-inch centre-dash infotainment touchscreen, you can fit a couple of kids comfortably in the back and there's a 300-litre boot. Under the bonnet, most customers choose a 1.2-litre petrol PureTech unit, which offers either 83 or 110hp. Alternatively, there's a BlueHDi 100 diesel variant.

In our 'Offers' section, you'll find that a 1.2 PureTech 83 petrol model with plush 'Origins' trim can be yours comfortably within the £200-a-month budget.

For more motoring news, check out our car blog and, while you're here – why not browse our car leasing deals.