Don’t let the petrolhead dinosaurs tell you that electric cars can’t be a match for the fastest sports cars of yesteryear. In many cases not only are they as quick, they are, in fact, quicker.

Performance is almost a given in ANY electric car – even the smallest city cars surprise people with their nippiness and acceleration. That’s all down to a simple and key characteristic of electric motors: their instant torque response when you press the accelerator.

Unlike an engine that needs to burn petrol or diesel to turn it, an electric motor is able to provide maximum power and acceleration at any point, regardless of the car’s speed. So as soon as you prod the pedal the motors can spin up without any delay. Electric cars of all types are all ideally placed to overtake quickly and make great progress when the lights go green.

Of course, those key constituents of all EVs – the motors and battery packs – can then be further tuned and engineered to provide all kinds of driving characteristics. So not all EVs are designed to be like drag racers. Most provide a sensible mix of relaxed motoring and on-demand performance only when you need it.

But the potential of electric motors hasn’t escaped the attention of car makers looking to create some of the most potent machines on the planet. They’ve turned up the power and acceleration to 11, and the results of their research are self-evident in the form of some of the most exciting electric sports cars ever built.

What Are The Best Electric Sports Cars Available Now?

Looking at a electrified performance as well as the practicality of range, our pick of the top 5 electric sports cars include: 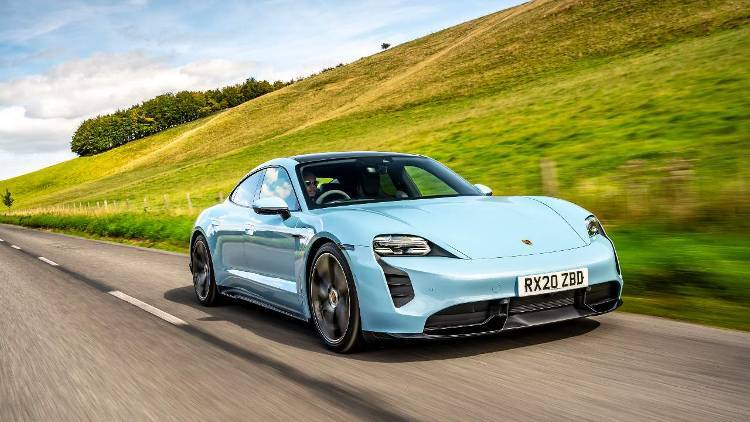 When German sports car icon Porsche said it was set to release an all-electric 4-door sports car, you could hear the groans of disapproval from its old-school fans ring out around the world. But how wrong were they? Very wrong.

The Porsche Taycan has arguably done as much to prove that the words ‘electric’ and ‘sports car’ can go in the same sentence as any other vehicle. Yes, it has all the blinding performance expected of a car with up to 761hp and an incredible 0-62mph sprint time of 2.8 seconds, with the help of launch control. But it also does something that the cynics didn’t believe Porsche could pull off: it looks, drives and feels like a proper Porsche.

Despite the weight penalty that a big battery pack brings, the Taycan handles with all the inch-perfect aplomb that graces all Porsches. And like all Porsches, it’s loaded with the very latest technologies, including an 800-volt charging system that allows it to get the maximum out of the very fastest, ultra-rapid chargers. And how about a 20-minute 0-80% battery charge, anyone? You can in a Taycan.

Bear in mind, though, that the Taycan with the longest 1-shot range can go up to 313 miles at a time and you realise that not only is this Porsche EV fast, it’s functional too.

For all the best Taycan lease deals right now, head over to our Porsche leasing pages. 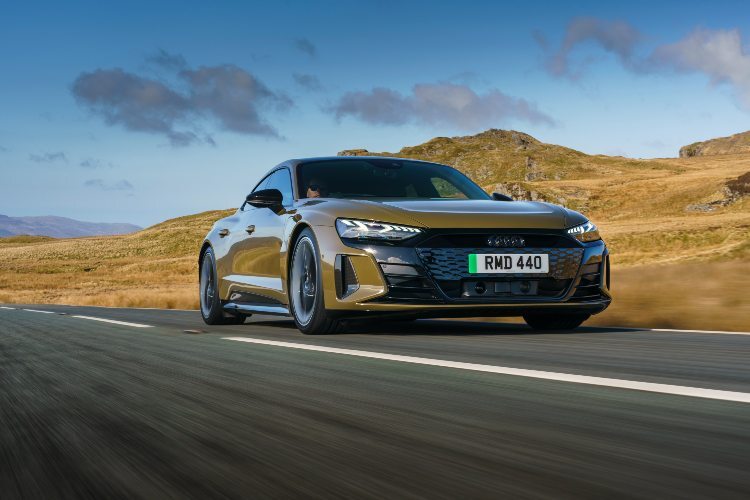 It’s widely accepted that Porsche’s Taycan is the sharpest-handling electric car on the market right now. But if you’re looking for a performance EV that is a true all-rounder – fast when you want it to be, and a brilliant cruiser when all you’re looking to do is chew up the miles – then you’ve got to consider the Audi E-Tron GT.

Why? Because the Audi and the Porsche are built on the same platform, which means that everything people like about the Taycan is inherited by the E-Tron GT. There are 2 different guises: the base E-Tron GT, which is plenty fast enough, and then the RS E-Tron GT, which is rocket-ship quick. Only the top-spec Taycan Turbo S and Tesla Model S Plaid can beat it.

But we wouldn’t actually pick the Audi if out-and-out speed is your measure of performance. Where the E-Tron GT shines is in its ability to flip its character to become a car that delivers a perfect blend of high-speed, relaxed cruising. When you want to really shift you can, but most of the time you’ll just be wafting along on an effortless wave of torque in a beautiful cabin that befits Audi’s most impressive EV yet. And with up to 298 miles of range to a single charge, you can enjoy the E-Tron GT’s character for decent and long stretches of time behind the wheel.

Spolit for choice between the two? Check out our head-to-head where we pit the Audi E-Tron GT vs the Porsche Taycan. 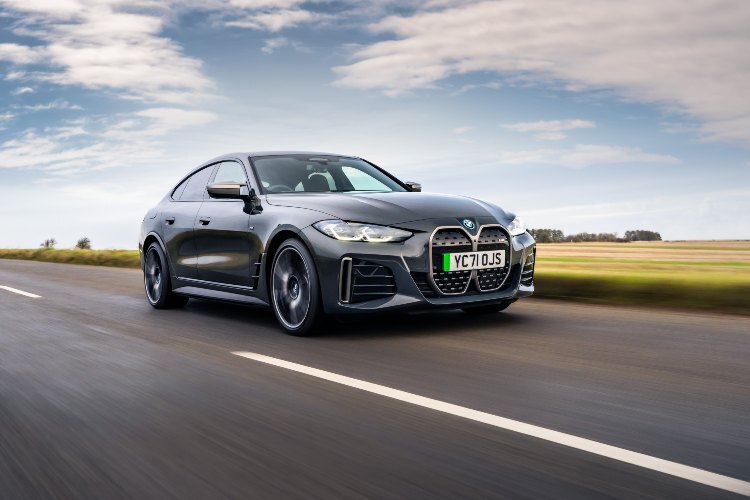 BMW has long been known for offering the ‘ultimate driving machine’ and now, as it makes the transition to becoming an electric vehicle (EV) manufacturer, it’s good to know its intrinsic dynamic abilities are going to be preserved in a zero-emission future.

The best exponent of this fine tradition is the mighty i4 M50, the high-performance version of BMW’s all-electric 4 Series Gran Coupe alternative. While the eDrive40 model is still fast, with 340hp and rear-wheel drive, the twin-motor M50 has a colossal 544hp to play with. That means 0-62mph in 3.9 seconds and a top speed of 140mph, which in EV terms is blistering.

However, it’s not just fast in a straight line but through the corners too, as it has a sublime chassis and great steering. And it’s also quick at the electric ‘pumps’, as if you can find an ultra-rapid charging unit that’ll dole out 200kW, the i4 M50 will take 71 miles of driving range onboard in just 10 minutes.

Better still, it has a range well in excess of 300 miles in all specifications (up to 365 miles if you go for the eDrive40 model), and this is also a super-refined and comfortable car for everyday driving duties, so the i4 M50 is a really strong all-round choice if you’re after a performance EV. 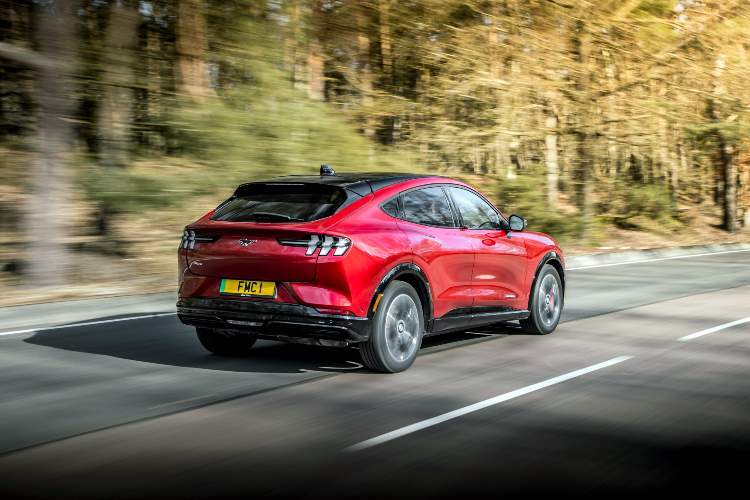 This might well be an electric SUV but it has a truly iconic name: Mustang. Ford used to reserve the badge for its big-engined muscle cars but now the Mustang name graces the electric arena on the Mach-E SUV.

And it’s a fitting choice. The Mustang comes in both rear- and all-wheel drive formats, and it can pack a serious punch. The top-spec AWD Extended Range version, from the ‘regular’ line-up, can sprint to 62mph in just 5.8 seconds, but if that’s not enough for you then a performance GT flagship has 487hp and a goliath 860Nm at its disposal, resulting in a supercar-esque 0-62mph time of 3.7 seconds.

The Mustang isn’t just quick out of the traps. It’s a great long-range ride too, with the RWD Extended Range model capable of 379 miles of range.

You can lease a Mustang Mach-E right now, with our unbeatable deals available on our leasing pages. 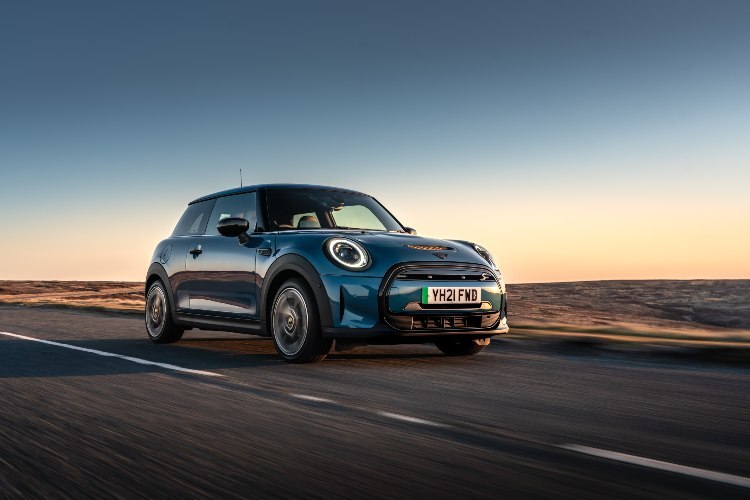 Sporting performance can come in small packages too, which is why we’ve added one of our favourite superminis to the list: the MINI Electric.

All MINIs are blessed with that unique mix of quick, responsive handling and nippy speed. The MINI Electric does all that and more, thanks to its electric powertrain that can propel it to 62mph in shade over 7 seconds (that’s pretty much a match for a petrol MINI Cooper S).

And with the electric motor whirring, the car is actually really suited to the kind of round-town driving that the MINI is famed for. Good news, as the car has a maximum 145-mile range, so it’s best to enjoy its character in urban and semi-urban areas.

A MINI Electric can be yours for a surprisingly affordable monthly fee, if you visit our MINI leasing pages. Still unsure if an electric MINI is the way to go? Take a look at our in-depth article comparing the iconic hatchback ICE version against the MINI electric.

Find out everything you need to know about electric cars including how to charge them, how much charging costs and much more in our handy guides.

Tesla Model 3 Review
We take a look at the most popular electric car on the market, the Tesla Model 3...Read Review
Audi E-Tron GT vs. Porsche Taycan: What’s The Difference?
Electric car twin tests don’t get much more, well, electrifying than this... It's time for the Audi E-Tron GT to take on the Porsche Taycan!Read More
Who Makes Electric Cars?
Which car manufacturers are making EVs right now? Here’s our full rundown on the current zero-emission offerings you can find in the UK...Read More