Electric car twin tests don’t get much more, well, electrifying than this. The Audi E-Tron GT and the Porsche Taycan are 2 of the world’s most exotic, most advanced and most powerful EVs. Some numbers in evidence, then. If you added together the top-end versions of each, their power would total 1400hp, their torque 1900Nm (enough to uproot a bungalow, basically), and they’d cost £250,000 before adding any options. And in the quickest of them you’d be able to crack 62mph in less than 3 seconds. But which is better? Let’s find out.

OK, so which is better?

Hold your horses… your electrons, if you like. Both of these cars are built on the same Volkswagen Group electric platform, but they have very different personalities. You’d probably expect that - Porsche and Audi are very different brands - but this is not the sort of badge-engineering exercise that used to prompt sniffy phrases like ‘a SEAT Leon is just a Volkswagen Golf in drag’. Nope, these are quite unique things, and which one you’ll prefer is very much determined by how you want your top end family EV to feel. 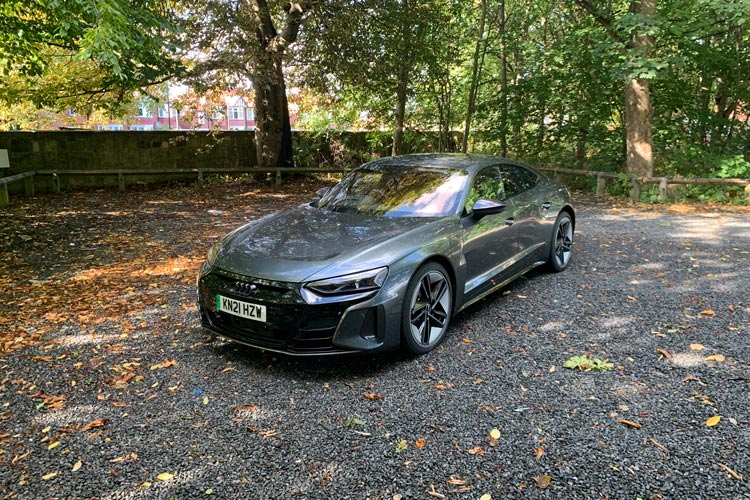 Volkswagen Group electric platform, you say? So these are just a suped-up Volkswagen ID.3?

Bit sniffy, that. Sheesh. Anyways, no they’re not. The ID.3 is on the Volkswagen Group MEB platform, which is used for the more ‘mainstream’ stuff across the company’s brands - the Skoda Enyaq, Audi Q4 E-Tron and Cupra Born, to name but a few. The Taycan and the E-Tron GT are both built on the J1 platform, designed specifically for electric cars of a more sizeable, powerful and luxurious demeanour.

I’m bored of platform talk now. Tell me how they differ from each other.

Hang on… a little bit more on the platform first, because it’s important. So although these cars do differ in character, the shared chassis means they both provide the same impressively modern EV fundamentals. Namely, an 800-volt architecture which means they can both charge at up to 270kW speeds. In real terms that means both are capable of charging their 93kW battery packs to 80% in less than 25 minutes - assuming you can find a rapid enough charging station - and both can squeeze 280 miles or so from a full battery. The Audi comes with a twin-motor, 4-wheel drive set-up as standard, and although most Taycans are the same, at the base of the range the Porsche has just got the 1 motor and rear-wheel drive, as well as a smaller 79kW battery. 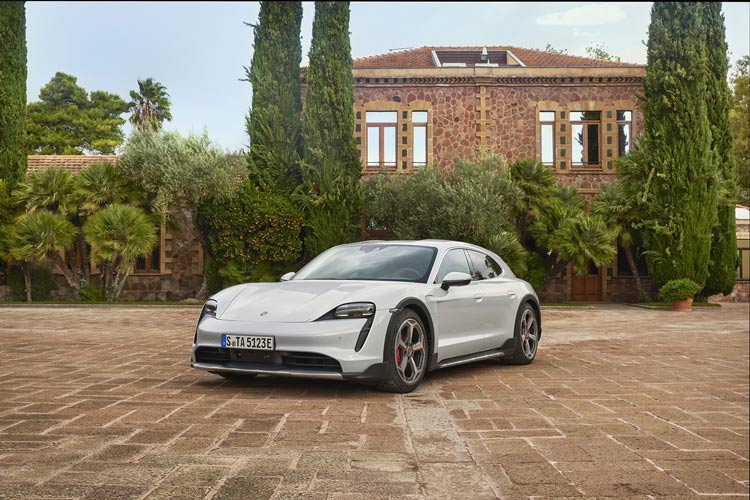 That all sounds very impressive, but you’re making them sound basically the same…

From a pure engineering perspective that’s kind of true, but from the wheels up these 2 cars are properly distinct. There’s actually quite a lot to delineate here because we’re talking about 2 car ranges as opposed to 2 individual models, and in the Porsche’s case the range is extensive. So Audi gives you 2 options with an E-Tron GT: the standard model and a higher performance RS version, with power the main differentiator. Both are 4-door saloons and there are no alternative body styles.

The Taycan offers a much broader range of options. Not only are there 2 battery packs, there are 3 body styles comprising a 4-door saloon model, a 5-door estate-type-thing called Sport Turismo, and another similar 5-door crossover-estate-type-thing with a raised body called Cross Turismo. Then there are your power options, of which there are many, starting with a ‘basic’ 326hp single-motor, rear-wheel-drive model. From there it’s all 4-wheel drive: Taycan 4, going through 4S, GTS, Turbo, and finally onto the 761hp Turbo S, getting progressively quicker and more powerful each time. It’s fair to say it’ll take you less time to figure out which Audi E-Tron GT you want. 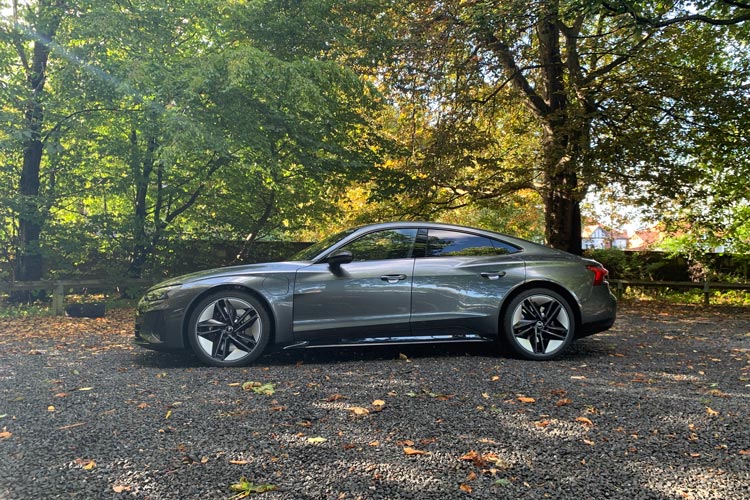 So there are lots of versions of the Taycan. Surely that affects how each of them feels and performs?

Correct. There is of course a big difference between the performance of a basic rear-wheel-drive Taycan and a top spec 4-wheel-drive Turbo S. For a start, the former takes 5.4 seconds to hit 62mph and the latter 2.8 seconds, thanks to 761hp. The latter is also roughly twice the price, at about £140,000 before you’ve started on the gargantuan Porsche options list.

The Taycan’s 4-wheel-drive system of course improves traction, and the raised body and fettled suspension of a Cross Turismo means it doesn’t feel quite as tied down as other versions. Nonetheless, every Taycan has the same basic characteristics - a shared sense of ‘Porscheness’ - that separates it out from the feel of an Audi E-Tron GT, be it a basic E-Tron or a cooked-up RS model. That cooking, by the way, takes the RS model to 646hp from 530hp in the standard car. The RS still can’t match the Taycan Turbo S for pace though, taking 3.3 seconds to hit 62mph. Absolute tortoise. LOL.

OK. So, finally, what’s the difference?

Before we get into that… kidding. The difference is that the Taycan feels like Porsche has made an electric, well, Porsche. Obvious, yes, but the Taycan really has an innate sense of being a driver’s car first and foremost, an involving, exciting thing to steer  - just one with space for a family of 4 and their stuff. The E-Tron GT, on the other hand, has more of a comfortable ‘tourer’ type feel about it. It rides with a little more sponginess, it’s beautifully refined and quiet, it feels more spacious from the driver’s seat, and the cabin has a more sumptuous, tech-heavy vibe. That applies to the RS version too, which despite being fettled by Audi's Motorsport team, retains the same sense of luxury; it’s probably the most serene, least maniacal product that Team RS has ever stuck its badge on. 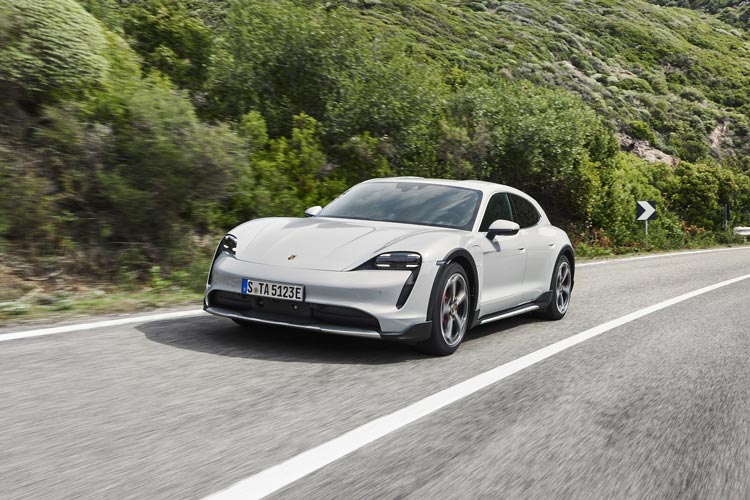 Does that mean the Taycan is better to drive?

Yes, to be honest. But actually there’s more than enough driver involvement in an E-Tron GT and there’s a strong argument for saying it’s the more complete, more enjoyable car for the day-to-day mundanity of life. In the Taycan you’re looking over a bonnet with bulges at either side that dip towards the ground, and the whole thing has that very specific bob you get with a 911, like an innate reminder that the car’s always being drawn to the road, always trying to connect. The steering too, nobody does it like Porsche. From the feel of the rim itself to the weight of it and the preternatural sharpness. There’s nuance, and it exists whether you’re trying to get around a corner as quickly as you can, or trying to get to a dentist appointment as slow as you can. All that said, it’s still smooth and comfy.

So how does the E-Tron GT compete with that?

It doesn’t, quite. Instead, it’s fundamentally a large, refined and quite brilliant high-end family car. A beautiful zero-emissions grand tourer. It’s mostly down to ride quality that’s softer than a junior gymnastics landing mat. It really does feel like a proper luxury car in every sense, with that gentle, soothing sway quality that a Range Rover has. That said, like the Taycan it’s a proper dual-nature car, it’s just that the balance is tipped towards the refinement thing as opposed to the dynamic thing, despite it being unbelievably quick and supremely grippy around the corners. 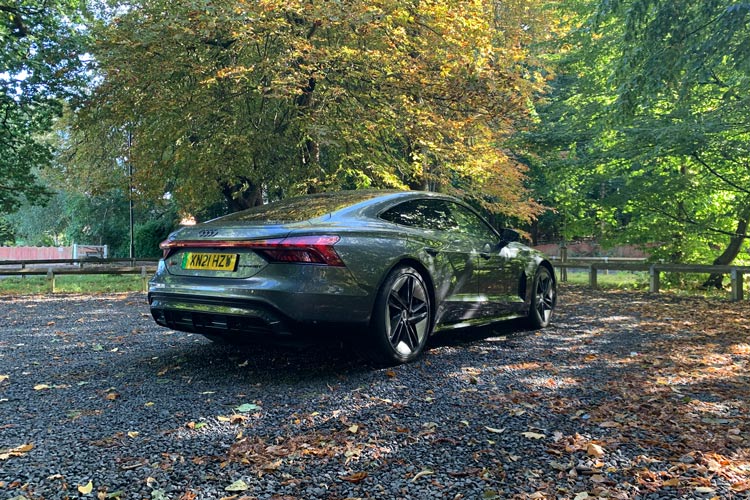 Presumably they both work great as family cars though?

Correct. You’ll still want an SUV if you’re looking for huge space - both of these have interior room more akin to a family hatchback, despite their length - but both accommodate 4 adults in comfort, and both have similar luggage capacities across their front- and rear trunks. About 450 litres. The main mark against both the 4-door Taycan and the E-Tron GT is that they don’t have hatchbacks, but if flexibility is what you want then the Taycan Sport Turismo and Cross Turismo models do.

So which has the better cabin?

The E-Tron GT edges it, for us, because where the Taycan has a nice sense of minimalism - in stark contrast to the button-fest that Porsche cabins were until recently - it’s arguably a little on the grey side. There’s not a lot in the Porsche that really draws your eye, not a lot to get massively excited about. The Audi, meanwhile, goes the other way. You’ll struggle to find a car interior that screams more loudly about how advanced it is, despite having the same basic triple-screen architecture as the Porsche. It’s a feast of textures and shapes and colours though, and while it might be a little too much for some, the build quality is utterly phenomenal, and for us it strikes the perfect balance between intuitive usability and digital futurism. 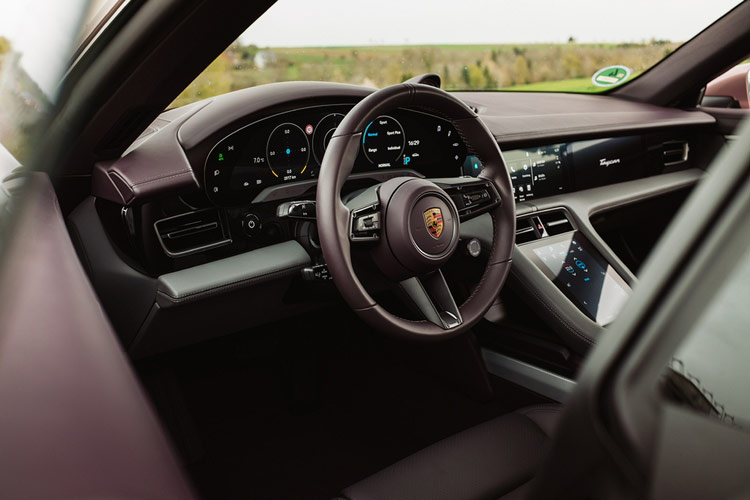 And the winner is…?

Draw. Sorry. Genuinely, we’re not copping out. If it’s sheer comfort you want with your top-end EV, then it has to be the E-Tron GT. We’d also say it’s styled with more pizzazz inside and out. But if you really want the most involving EV driving experience this side of an actual supercar, then there’s no contest. That’ll be the Taycan. Any one of them.

More On EV
How Far Can An Electric Car Go?
The answer to 'how far can an electric car go?' might surprise you. Find out about WLTP range and which cars pack the best performance. Read More
How Long Do Electric Car Batteries Last?
Electric car battery lifespan is a key question for people looking to make the jump to EV. Find out how long they last, how best to look after them and why leasing means you don't have to worry about battery lifespan. Read More
The Best Electric Cars In 2022
Right now, there’s a wealth of great electric cars out there to lease – of all shapes and sizes. Here, our motoring expert and chooses his favourites in 6 major categories. Read More