A change of heart from Audi. You see, over the years Audi has variously made its high-performance ‘S’ models either powered by petrol or diesel, but has rarely ever given the option of choosing from both at the same time. For a while, it seemed like all S Audis would be going to diesel propulsion, but then the consumer backlash against the fuel in the wake of parent company Volkswagen’s involvement in the Dieselgate scandal of 2015 has seen Audi flip and flip from one fuel type to the other in the aftermath.

So, weirdly, certain models of S Audi – like the current S4, S5, S6 and S7 cars – are all TDIs, while the SQ2 is a TFSI petrol. The SQ5 can’t seem to decide what it is, one minute being a TDI, then switching to TFSI and then deciding it didn’t like that at all and going back to being a TDI… it’s all very confusing. Obviously, as Audi has another level of performance again above the S-cars, these being the outrageous RS models, then it has the capability in some model ranges to have one fast diesel car and one very fast petrol car (as there has never been a production version of a diesel-powered Audi RS), theoretically catering to all possible customer needs. 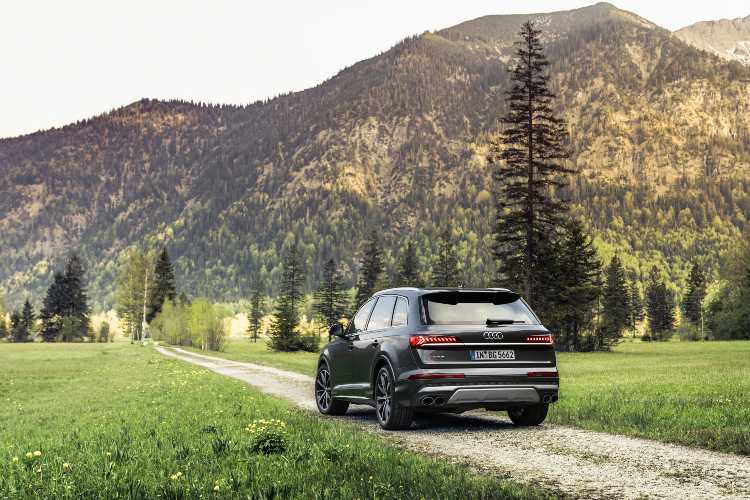 That means we now get to the point of this particular review and this mighty SQ7. Now, the 7-seater Q7 is Audi’s biggest model by size, even if it isn’t by hierarchical status; the related coupe spin-off, the 5-seater-only Q8, takes that honour in the SUV line alone. And because the Q7 is supposed to be a family car, Audi has never offered an RS version of it, and it probably never will either.

Therefore, the SQ7 is the pinnacle of the Q7 line, with the high-performance model first appearing in 2016. At that point, it was powered by a revolutionary ‘triple’-turbo (2 conventional turbos and then an electrically powered compressor, or EPC, to minimise lag) 4.0-litre V8 turbodiesel, with 435hp and a thumping 900Nm. And it kept this engine, even during the Q7’s midlife facelift in 2019… until, in 2020, Audi had the change of heart we mentioned at the outset and switched the SQ7 from TDI diesel power to TFSI petrol punch.

The result is that the SQ7 TFSI has seen a huge uplift in power, the peak swelling from 435hp previously to 507hp here (a gain of 72hp), but it has also lost some torque in the process. Whereas the SQ7 TDI had fully 900 Newton metres of the stuff, making it simply devastating for roll-on acceleration in the midrange, the TFSI has dropped 130Nm to a maximum 770Nm. Mind, Audi claims the 4.0-litre twin-turbo V8 TFSI is much quicker on paper, the new petrol engine pushing 2340kg of behemoth from 0-62mph in 4.1 seconds – fully 0.8 seconds faster than the old TDI could manage. The top speed, as it ever was, is limited to 155mph.

Strangely, Audi has made the same diesel-to-petrol switch in the related Q8 line, which is most odd because that means you can now have the 4.0-litre twin-turbo TFSI SQ8 with 507hp, or you can have the 4.0-litre twin-turbo TFSI RS Q8 with 600hp and ever-so-slightly-wider wheel arches. Nevertheless, as we’ve already said, there is no RS Q7 to overshadow the SQ7, so has the German company made the right switch by going from TDI to TFSI in this 7-seater super-SUV?

The noise. To be fair, this was never a problem with the old Audi SQ7 TDI. In fact, the turbodiesel model had a significant degree of exhaust synthesis that could, when it was in in sportiest drive modes, make it sound like a V8 petrol. Some people don’t like ‘fake’ soundtracks in cars, but in the SQ7 TDI it was a brilliant conceit that worked not only for people sitting inside the SUV, but also those who were standing nearby as it thundered past. 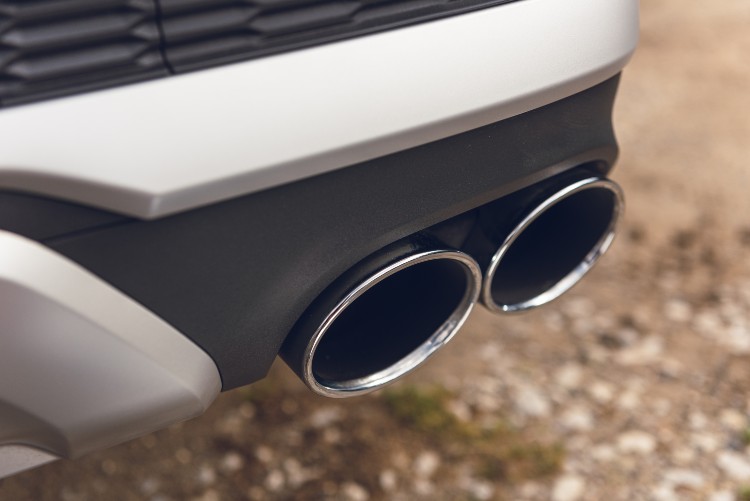 However, as good as the TDI was, you can’t beat a ‘proper’ V8 engine/exhaust note and this 4.0-litre petrol unit sounds magnificent all around the rev counter, whatever driving mode you’re in. It’s also happier to rev, because where the TDI had a 5000rpm redline (and it didn’t even want to get to that point, truth be told), the TFSI will cheerfully spin out to 7000rpm, bellowing all the way as it goes. Marvellous. 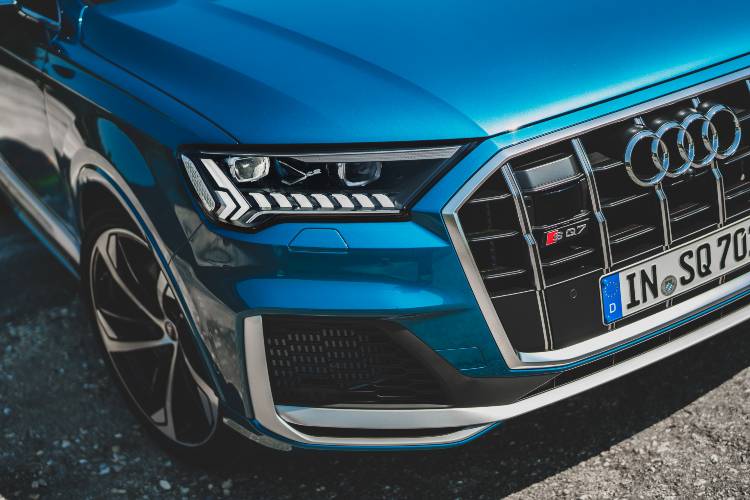 The inevitable impact of switching from diesel to petrol is a big hit on fuel economy, and so it goes with the SQ7 TFSI. On later WLTP ratings, officially the SQ7 TDI could do 33.6mpg with CO2 emissions of 190g/km. Such figures weren’t out of the question in reality, either, as we drove one for an extended period in 2017 that returned 32.2mpg across a 440-mile test-driving week, with a record high of 38.7mpg on one particular long motorway run. 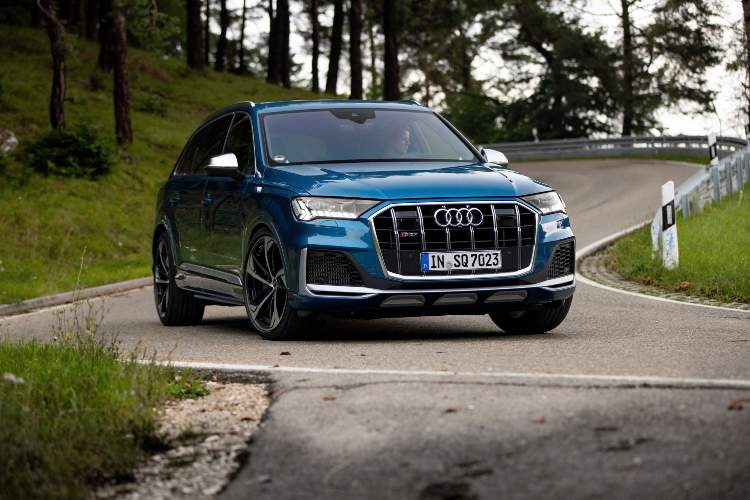 As large, 7-seat SUVs with the equivalent of a small nuclear powerplant under the bonnet go, the Audi SQ7 TFSI is most splendid. But, apart from the soundtrack, it doesn’t feel any more or less splendid than the superseded TDI variant used to. Petrol engines are lighter than equivalent diesels, so the TFSI has a little less heft over the nose, yet in practice you can’t really discern a difference to the way the TDI and the TFSI SQ7s get their fronts tucked into bends.

Part of the issue is that Audi threw the technological kitchen sink at the SQ7 TDI, in order to disguise its gigantic mass and make it handle anything like an S-badged Audi deserved to. This included a separate 48-volt electrical system, which not only ran that clever EPC in the twin-turbo diesel engine, but also some natty powered anti-roll bars – designed to stop the body leaning about in a high-speed corner before any such behaviour even happened. Factor in 4-wheel steering, for greater agility on something measuring more than 5 metres long and almost 2 metres wide, and a torque-vectoring rear differential, and you had a massive turbodiesel SUV that truly could corner and go like a limber sports car.

The thing is, all those things hold true with the TFSI – as 7-seater family carriers go, you won’t find anything that drives better than the latest SQ7. But it doesn’t move the game on from the old TDI. It feels much the same, if anything. Nice, positive steering, not always a given on an S-model Audi but, blessed relief, such a thing is found here. Fabulous ride on its twin-axle air suspension, despite the colossal 22s sitting as unsprung mass at every corner. Astounding handling characteristics, with grip like you wouldn’t believe and body control that’s exemplary. All the usual Audi ease-of-use when you’re just travelling along gently with everyday traffic in the SQ7. Yes, it’s a fantastic high-performance SUV, this.

But so was the old TDI. And that didn’t drain your fuel tank (or, for that matter, your wallet) anything like as fast as the TFSI will. And so you have to really, really, really want an unaugmented V8 soundtrack from your 7-seat SUV for the expensive SQ7 to make any sort of sense at all. 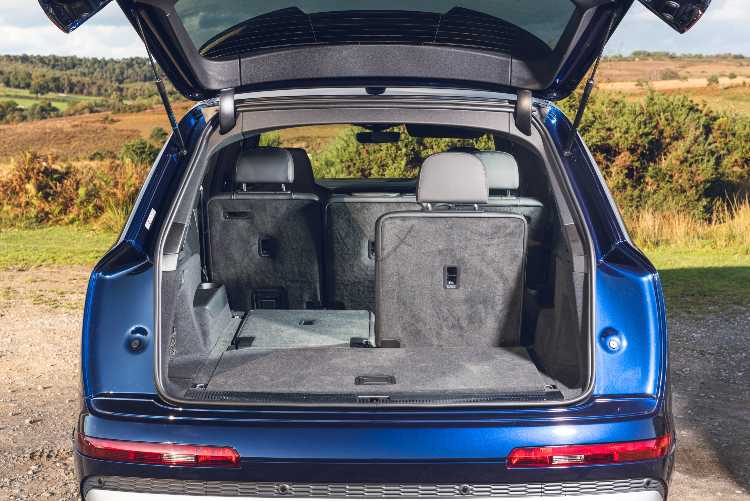 You don’t get many cars that’ll run a 4-second 0-62mph sprint which are more practical than the SQ7 TFSI. Honestly, we can’t think of any. Not only does it have 7 seats, for a start, but there’s also the all-weather traction of quattro AWD to think about, as well as Audi’s typically exceptional ergonomics in the cabin – meaning sitting in and operating the SQ7 is as relaxing as relaxing could possibly be – and also the fact that if you fold the 2 seats in row 3 down, you have an absolutely vast 705-litre boot to play with. Furthermore, useful storage solutions and cubbies abound, so the SQ7 cannot be faulted on any rational practicality basis. 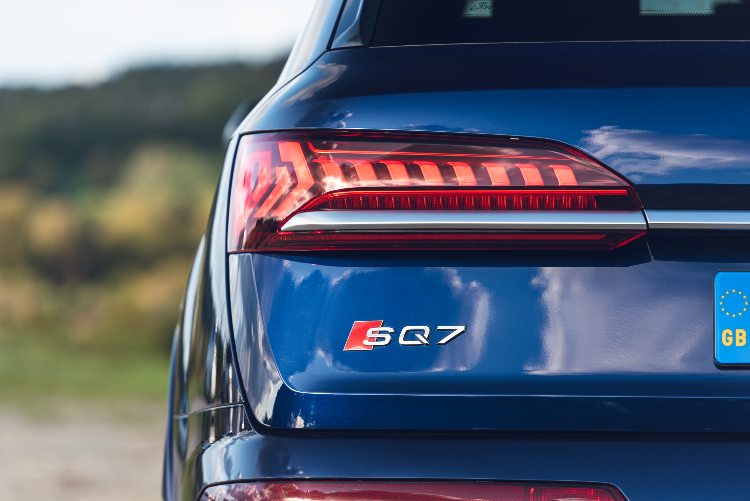 A lot. As we’ve already said, specified in flagship Vorsprung trim and with a nice metallic paint on the bodywork, you’re looking at nigh-on 100 grand for this SUV. When the main Q7 range starts at £60,000. Those figures translate into our lease prices, because whereas you could put a brand-new Q7 45 TDI quattro on your drive for around £664 per calendar month with Vanarama’s great deals, an SQ7 TFSI Vorsprung is 10p shy of £990pcm. Ouch. Then there’s the increased fuel costs, brought about by the 20mpg thirst and 2.35-tonne kerb weight, and the insurance, and the servicing and maintenance on a vehicle with a 507hp V8 engine… yup, cheap, the Audi SQ7 most surely ain’t. 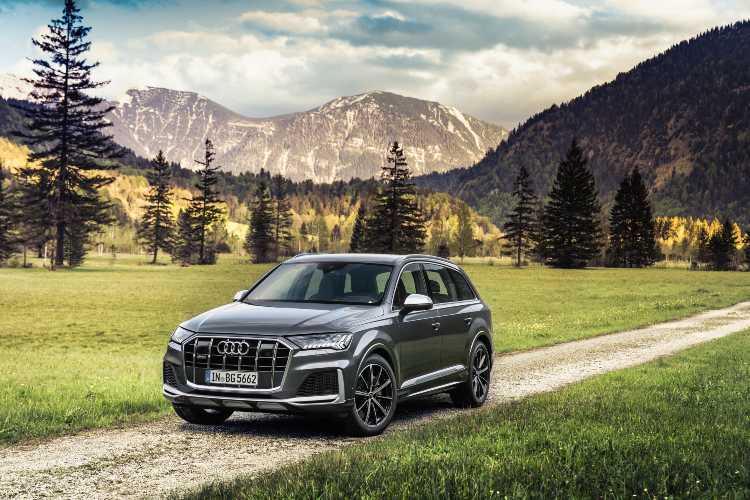 Short of being able to climb inside and look at the rev counter, or if you’ve got a really good ear and you can tell the difference between a V8 diesel mimicking a V8 petrol or not, or if you know the Audi’s owner and you can pop the bonnet to look at what lies beneath, you won’t be able to tell the SQ7 TFSI of 2020-onwards from the facelifted SQ7 TDI of 2019-2020. On the outside, they’re identical, right down to the quad circular tailpipes at the rear (whereas pre-facelift SQ7s had square exits and proudly wore a ‘TDI’ badge on the right-hand side of their bootlids) and all the detailing.

What Are The Best Audi SQ7 Alternatives?

Take a look at our latest Audi SQ7 lease deals or check out our wide range of expert car reviews and features.