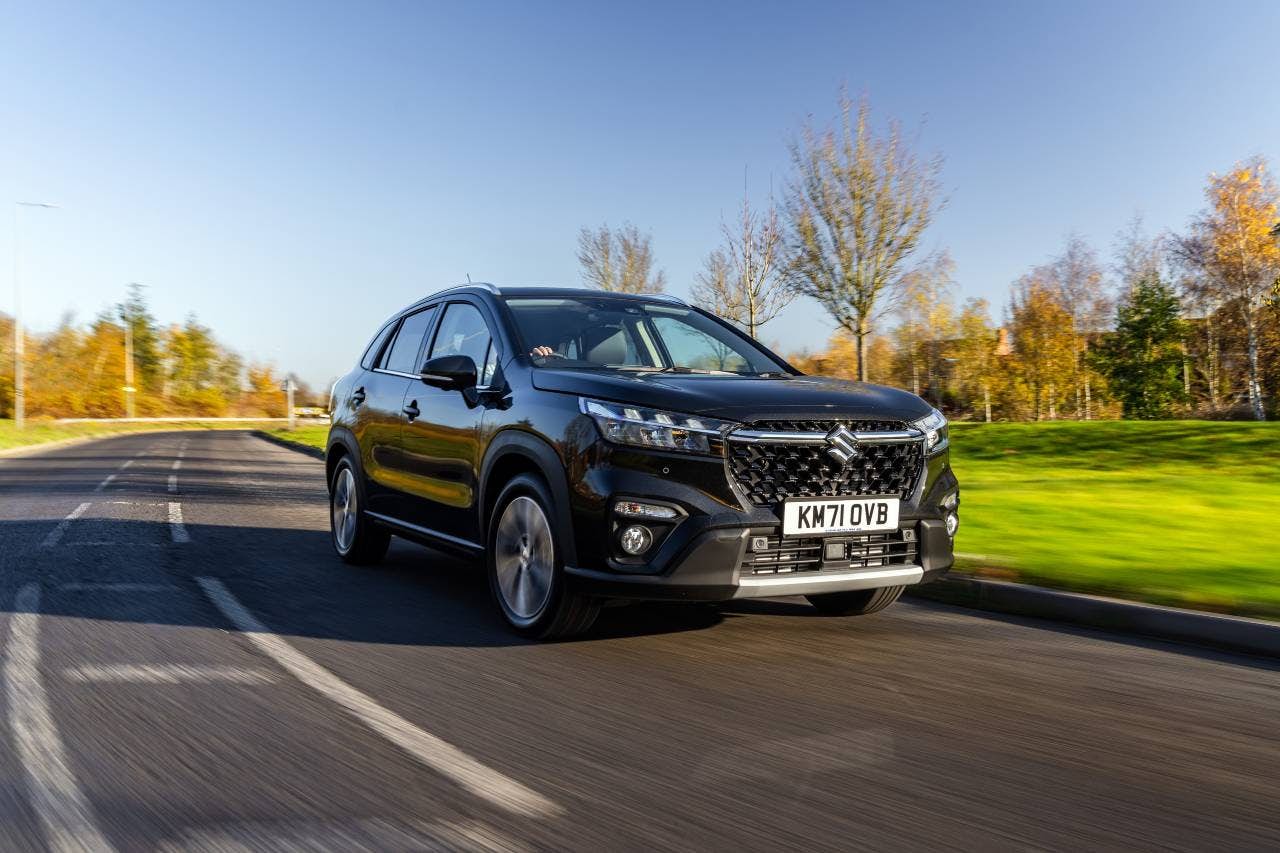 Suzuki’s formerly rather car like crossover, made to look more… SUV-ish this time around. It’s the all-new, 3rd generation of the S-Cross and it is launching just in time for the 2022 sales period. 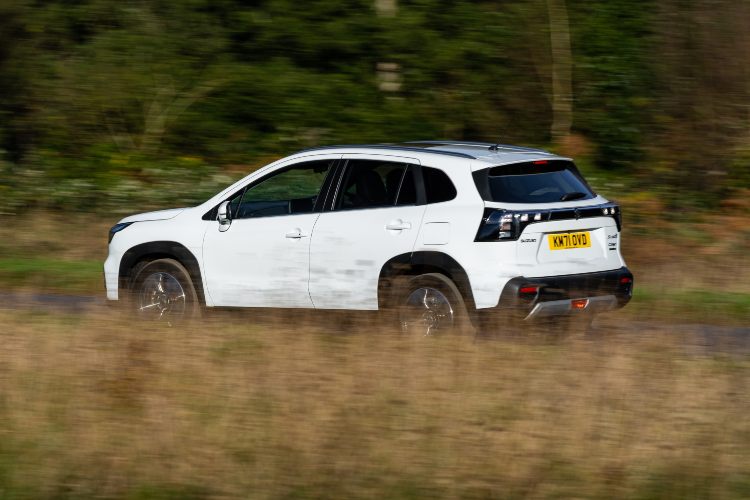 The latest S-Cross slots into a 3-strong range of SUVs that Suzuki now offers, with the long-serving Vitara as the entry point and the Toyota RAV4-based Across (no hyphen here, as in S-Cross) topping the lot off. That said, the Vitara has, over the years, been compared to a Nissan Qashqai-sized car in terms of its market placing and size. And the RAV4, which the Across is almost identical to given it’s a rebadging-and-front-end-styling exercise and nothing more from Suzuki, is also considered a rival to the Qashqai.

So what does the S-Cross offer that the Vitara and Across do not already? Well, that’s what we’re driving it for. Price-wise, it’s much closer to the Vitara (which starts at £21,749) than it is to the Across (kicking off, as it does, at a beefy £45,599, because it’s the most-expensive plug-in hybrid version of the RAV4 it uses as its basis), with the S-Cross starting at £24,999 for a Motion-spec car and rising to £29,799 for an Ultra. Time to see if the S-Cross has got the chops to compete in the cutthroat C-segment crossover-SUV marketplace… 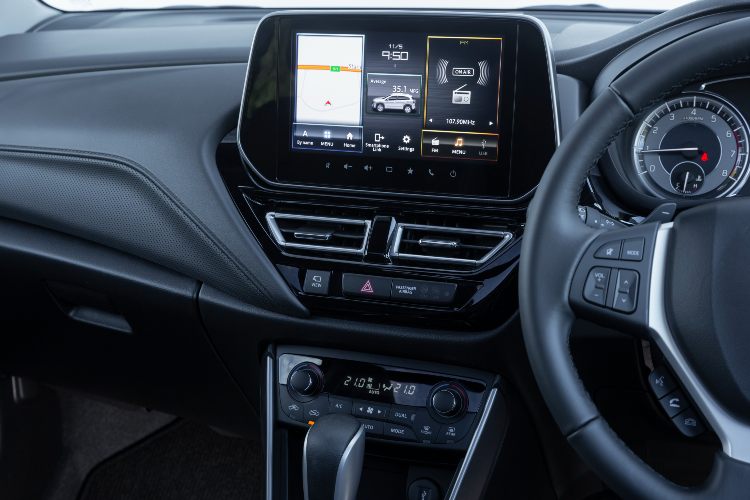 A typical Suzuki strong point, the S-Cross is remarkably well equipped for the money. Motion and Ultra, the 2-grade trim hierarchy thought up by Suzuki UK, replaces the company’s previous spec ladder of SZ3, SZ-T and SZ5… and no, we could never understand why that middle level wasn’t called SZ4, either. Or why, in fact, the whole lot weren’t just SZ1, SZ2 and SZ3. But we digress.

In essence, a Motion is equivalent to the old SZ-T and an Ultra is the replacement for the SZ5, which means that Suzuki UK was bold enough to say that there is ‘no entry-level model’ of the S-Cross. We’ll outline the fuller equipment levels later on in the piece but, when you look at what is packed into an S-Cross Motion, then you tend not to find Suzuki’s statement facetious in the slightest. Things like radar cruise control, heated front seats and LED lights all round on the outside are just part of a long kit list, much of which is made up of items that would be cost-option extras on many of the S-Cross’ rivals. 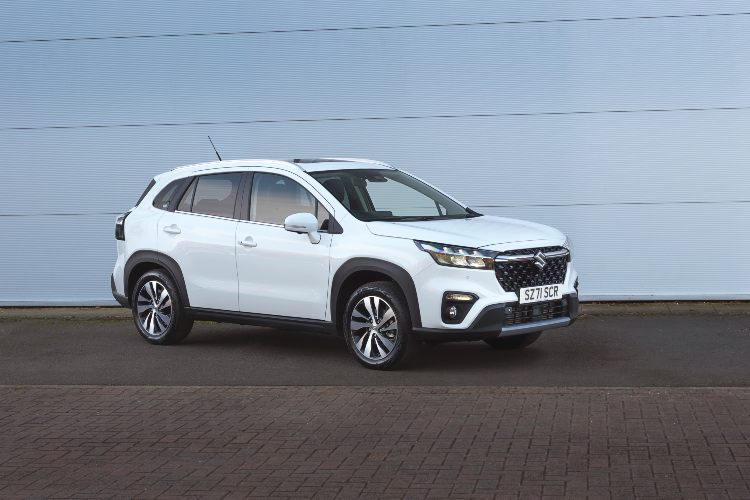 This is a tough, tough sector of the car market right now. There are some really strong, really daring competitors available out there and Suzuki, bravely, referenced 3 of them in particular – those being the Peugeot 3008, the Hyundai Tucson and the incoming, brand-new, 5th-generation Kia Sportage.

Now, all 3 of those are incredibly striking to look at – even the Peugeot 3008, which is comfortably the oldest of the trio. Not only that, but that all have fancy, funky, heavily digitised interiors to go with them, which perhaps mitigates their slightly higher asking prices when compared to the Suzuki.

The problem with the S-Cross is that, well… it’s not very adventurous, is it? Certainly, when it comes to the crossover’s appearance, this counts either outside or in. Admittedly, both the exterior surfacing and the interior layout are perfectly inoffensive and acceptable, with the body of the S-Cross now looking more like an SUV, and less like a jacked-up car, than it ever has before.

But aside from that full-width design flourish on the tailgate, which links the rear lamp clusters together, it’s a forgettable thing to look at. Especially in the face of concept-car-like crossovers like the Tucson and the Mk5 Sportage. Oh, and not forgetting the Mk3 Qashqai itself, the longstanding sales titan of the sector and something which has been much improved in its current format. Honestly, we find we still prefer the sharper, more angular look of the Mk4 Vitara, a model which has been on sale since way back in 2015. Probably not what Suzuki UK wanted to hear at this point in the review, but there we are.

And inside, the S-Cross is a little short of drab. OK, some of the surfacing materials have been jazzed up and, ergonomically, the Suzuki is just about spot on – the buttons are all laid out in an intuitive fashion, the driving position is good and visibility all round is excellent. But there are still enough hard, unyielding plastics in your immediate vicinity that tell you the car is built to a strict budget, while the general aesthetic is fairly sombre. Not even an updated infotainment system (with a 7-inch screen on a Motion and a 9-inch unit on the Ultra) can particularly lift it in here.

The long and short of all this is that the Suzuki S-Cross doesn’t feel new. In truth, it feels much like what a decent, value crossover would have been like about six years ago. It’s not moving the game on in any single area of its physical form. 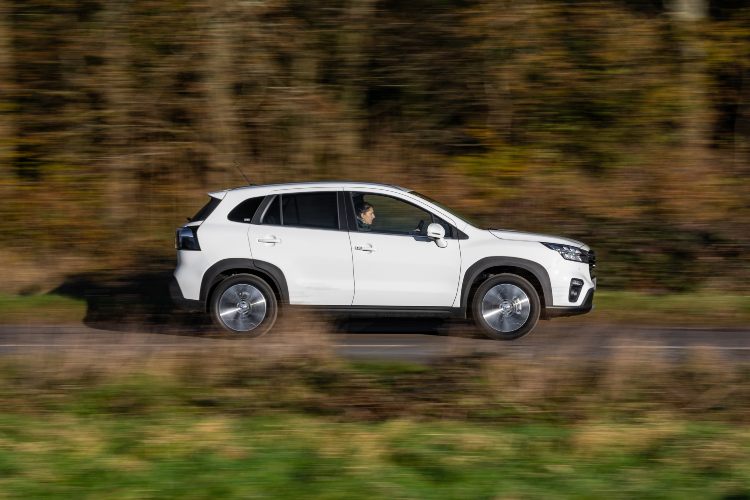 The reserved visual aspects of the S-Cross translate into a good but largely anodyne driving experience too. But let’s start with the good stuff – for instance, did you know Suzuki has sold 100% electrified cars in 2021? As in, every single vehicle it has put on the UK roads has been a hybrid of some sort.

Thus, the S-Cross continues in this vein. It is only available with a 1.4-litre turbocharged Boosterjet petrol engine plus a 48-volt mild-hybrid system, comprising a lithium-ion battery, an Integrated Starter Generator (ISG) and a 48V-12V DC/DC converter. The hybrid system adds less than 15kg to the overall weight of the vehicle, yet being a 48-volt affair – unlike the less potent 12-volt set-up on the Ignis and Swift models from the same manufacturer – means there is more electric motor assistance and energy recuperation, improving fuel economy.

Obviously, those best eco-figures for the S-Cross relate to the manual, front-wheel-drive version. Suzuki offers Allgrip 4-wheel drive on the new car, but that’s spec-dependent – if you buy a Motion, you get front-wheel drive, whereas if you go for an Ultra then you’re blessed with Allgrip. Either version comes with a 6-speed manual as standard but, for a £1350 fee, can alternatively be paired to a 6-speed automatic ‘box. As the Allgrip system adds almost 70kg to the S-Cross, while the autobox is another 30kg, that means the Ultra Allgrip Auto model is the heaviest version by nearly 100kg and can therefore only achieve best figures of 46.3mpg and 139g/km.

Not that this matters much to the sensation of driving the S-Cross. We only tried Ultra cars, 1 with a manual transmission and the other with the automatic, and despite an on-paper 0-62mph deficit of 0.7 seconds for the Allgrip (a front-wheel-Drive S-Cross can do the sprint in 9.5 seconds, compared to 10.2 for these models), there’s no difference between the manual and the auto in terms of speed.

There’s not a huge amount of that, though, no matter which gearbox you opt for. A commendably light kerb weight does mean the Boosterjet makes the most of its peak torque hitting at just 2000rpm, but if you have to rev the 1.4 out it starts to sound a bit strained and unhappy at the prospect, while acceleration tails off noticeably after 5500rpm and peak power.

Further, we’d definitely have the manual over the automatic. Not that the self-shifter is actively bad, but in this day and age of rapid dual-clutch shifts, or gearboxes with up to 10 speeds in them, the 6-speed auto is one of the facets of the S-Cross that’s from a bygone age of motoring, now we’re in 2021. The manual shifter is no shining light of H-pattern gates in terms of its operation, but it’s OK and preferable to the auto.

Other than that, the Suzuki is proficient in many departments and outstanding in none. Its soft suspension and 17-inch wheels do a good job of providing a cushioned ride quality, but refinement is an area that could do with work as there’s more noticeable tyre roar at speed in the cabin of the S-Cross than you’d get on almost any rival from another manufacturer. At least it proved as frugal as its maker claimed – on an A-roads route on the English-Welsh border, the S-Cross achieved circa 50mpg without us making any conscious effort to save fuel.

And the handling? It’s fine. There’s plenty of pitch, roll and dive – that is, sensations the body is moving around on its suspension a lot when accelerating, braking or cornering – so you never really fully commit to the grip levels of the S-Cross, and you’re also not helped by overly light, feel-free steering. But for the sort of road-holding requirements that most Suzuki customers will subject the S-Cross Hybrid to, the chassis settings will be more than able to cope. It’s just that there are nicer-driving things available elsewhere in this market segment, even allowing for the fact that C-segment crossovers are rarely thrilling from behind the wheel. 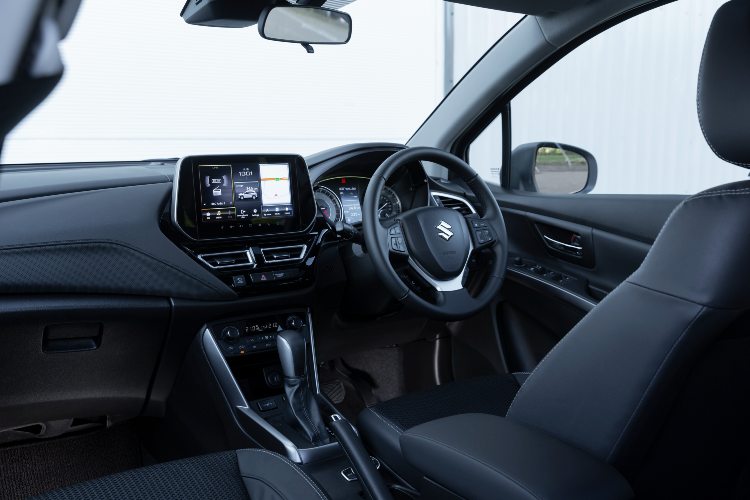 Suzuki’s done a good job here. The S-Cross might be in the Qashqai et al class, but it has a smaller footprint than most comparable cars as it’s only 4.3 metres long. That’s not to the detriment of boot space nor rear passenger room, though, as the S-Cross is an accommodating car. True, the panoramic sunroof that is standard-fit on an Ultra does eat into headroom at the back of the Suzuki, but legroom in the 2nd row is good, and a 430-litre boot is none too shabby at all.

Elsewhere, there are plenty of sizeable storage spaces and cubbies, while the added traction of the Allgrip will be most welcome in a sector of the market where most entrants look like they should have 4-wheel drive, yet they don’t always do. Suzuki UK also offers a 3-year, 60,000-mile warranty on all its new cars, while the S-Cross’ service interval is a useful 12,500 miles. 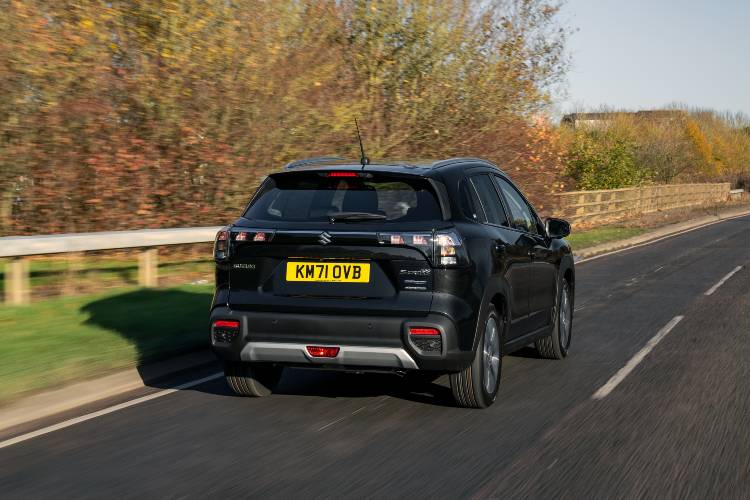 The Ultra not only adds the Allgrip select 4-wheel-drive system as standard, but also a polished finished for the 17-inch wheels, a 360-degree-view camera, leather upholstery, a dual-sliding panoramic sunroof, a larger 9-inch infotainment system incorporating satnav, and an extra central speaker at the front of the cabin to go with the 6 you get as standard on the Motion. 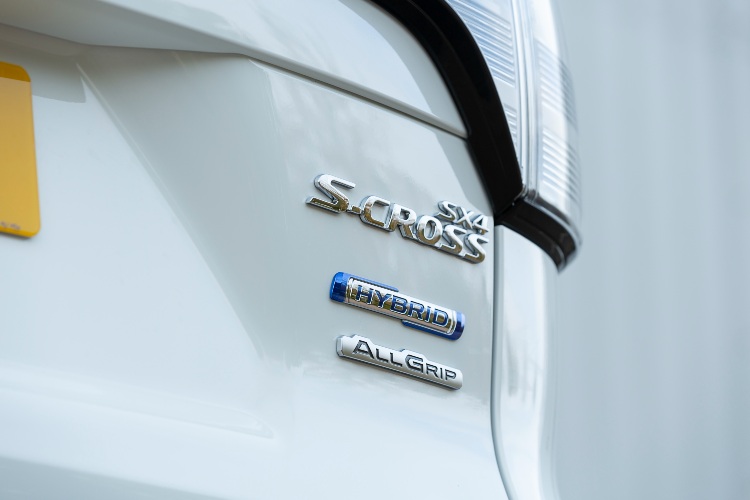 Formerly known as the SX4 S-Cross for its first 2 generations, which have been on sale since 2006, this time around Suzuki UK is referring to this vehicle as ‘just’ an S-Cross. Which is odd, because if you look closely at its boot badge then you’ll see the small ‘SX4’ legend survives. Even though Suzuki will not mention the SX4 thing in any of the official materials or when chatting to them.

If you want a bargain crossover, the Duster is a lot cheaper than the S-Cross – and not much smaller inside.

Massive upswing in quality from Mk3 to new Mk4, the striking Tucson shows just how risk-free the Suzuki is.

A showroom giant, and far more refined and classy than the S-Cross, for not much more cash at all.

Three things to remember about the Suzuki S-Cross Hybrid: