A medium executive car which carries an awful lot of status with it – the Mercedes-Benz E-Class. It can trace its ancestry right back to 1953 in one way or another, but more correctly the E-Class name began in 1993 and this is therefore the fifth-generation car. It competes in a highly desirable class alongside the Audi A6, BMW 5 Series, Jaguar XF, Lexus ES, Maserati Ghibli and Volvo S90, which makes it a properly prestigious vehicle to have parked on your driveway.

The E-Class comes in all four main body styles for this sort of car, namely saloon, estate, coupe and cabriolet, and it was updated in 2020 with a new look on the outside, a freshened-up interior and also some new engine choices. Not only that, but the E-Class offers you not one, but two plug-in hybrid (PHEV) models – one with petrol power or one with diesel power, as you so choose. It might not be the sharpest-driving nor most entertaining car in this part of the market, but the E-Class is a truly, well… classy operator all round. Especially in terms of ride comfort and refinement, where it is second-to-none amongst its peers. 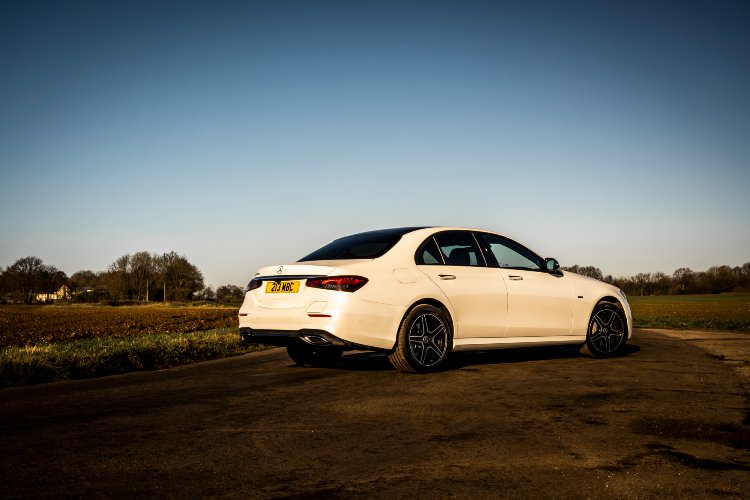 There’s a degree of elegance about the Mercedes-Benz E-Class’ styling and that is only enhanced by the midlife facelift. Easier to spot on the saloon models than it is on the estate and other variants, the main giveaway at the back comes in the form of light clusters that now bleed into the 4-door’s boot lid. However, all models gained new headlight clusters with revised LED running light signatures, plus a radiator grille that had an inverted shape in outline compared to the old car. So the grille is now wider at the bottom of its form than it is at the top.

You won’t find many better interiors than that within an E-Class. All models, from the base Sport upwards, have what is known as the Widescreen Cockpit. This sits two 12.3-inch, high-definition TFT displays next to each other in a large, rectangular binnacle that dominates the driver’s side of the dashboard. This is controlled by various mechanisms, including touchpads on the steering wheel (there’s even a new ‘double-spoke’ design for this particular item in the updated E-Class range, by the way) and voice control. Widscreen Cockpit not only looks superb, it works brilliantly too. 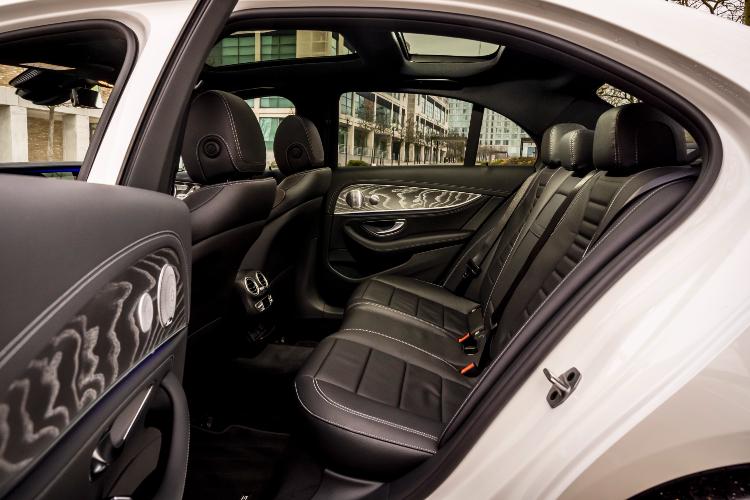 Like many a modern car, the Mercedes-Benz E-Class has one of those overly familiar intelligent assistants within its software. This is programmed to react to the vocal prompt ‘Hey Mercedes’, but it seems to pick up on every mention you make of the word ‘Mercedes’. So if you’re in the car and explaining why you bought the E-Class to a family member or a friend, you have to really mutter the word Mercedes in a low, indistinct voice – otherwise you’ll find the car’s help system fires up and starts trying to navigate you to the nearest Nando’s or something equally daft. Unless you shout ‘CANCEL!’ at the top of your voice.

Also, as the E-Class is predominantly a rear-wheel-drive vehicle, the centre-rear seat of either the saloon or the estate is not going to be that comfortable a place to sit for long – despite Mercedes claiming the car can carry five occupants. A raised base cushion and a large transmission tunnel in the footwell both conspire to reduce the centre-rear seat to that of occasional-use status for smaller people only.

Finally, due to the placement of the battery pack, the PHEV models have reduced boots. In the saloon, this manifests as a weird shelf-like arrangement in the boot just behind the rear seats. It ultimately means you lose 140 litres of cargo capacity, when compared to the models powered by conventional internal combustion engines. 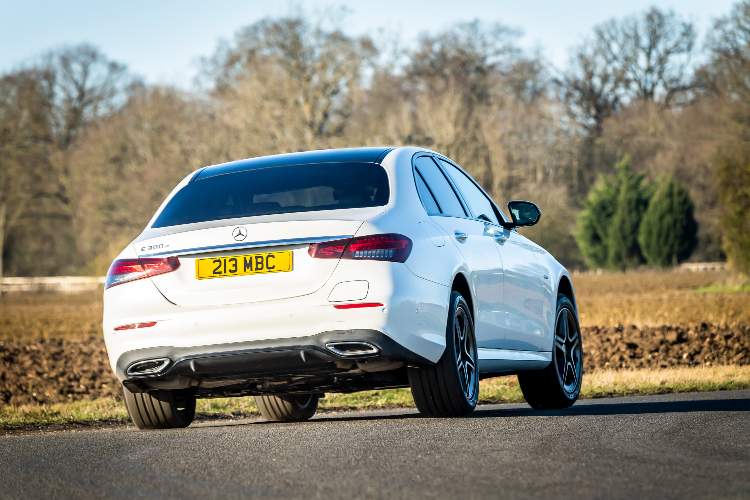 We drove an E 300 e petrol-electric PHEV model in high-spec AMG Line Night Edition Premium Plus, which comes with Mercedes’ Agility Control suspension. Clever shock absorbers can work out when you need more ride comfort and when you need more body control, just from how the wheels are moving up and down on a road surface, so the car can automatically switch between smooth rolling and taut suspension. In practice, it works brilliantly at making the E-Class a supreme long-distance cruiser. There are few cars in any class of the market which are more relaxing to travel in than the big Merc, while good sound suppression in the cabin means it is quiet as it glides along too.

The vast majority of the engines available for the E-Class are four-cylinder units and the one in the front of the E 300 e PHEV is no exception. It’s a 2.0-litre turbocharged petrol coupled to a 90kW electric motor and a 13.5kWh lithium-ion battery pack. This means a total system output of 320hp, so you won’t ever feel short-changed by how powerful and fast the E 300 e feels. A quoted 0-62mph time of 5.7 seconds, for a car weighing almost two tonnes, is entirely believable, for instance. Also, every E-Class comes with a 9-speed automatic transmission and it really is one of the best in the business – imperceptible in operation and well-matched to the PHEV’s broad spread of power.

Where the E-Class is slightly less impressive is in the corners. It’s a perfectly capable car and by no means boring to drive on quiet roads, but a BMW 5 Series offers another level of fun again for its driver. The Mercedes is a little bit too strait-laced and sedate to ever be classed as a thrilling drive, with light steering and not much in the way of genuine feel or information from the front wheels. But at least the company offers the option of 4Matic all-wheel drive on selected models, for those who need added traction from their executive machine. 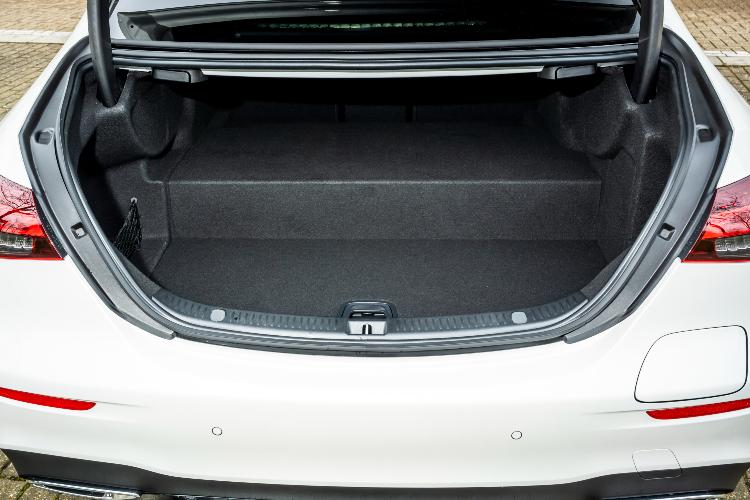 A standard Mercedes-Benz E-Class saloon with no PHEV gear onboard will hold 540 litres in its boot, with the PHEV dropping to 400 litres. The wagon, meanwhile, is a proper whopper, with 640-1820 litres available in the internal combustion cars and a still-useful 480-1660 litres in the PHEV, although the estate does have a sizeable step in the floor of the boot which hinders its outright practicality for bulky loads.

No qualms with the storage in the cabin, though, with large door pockets, plenty of storage compartments and a couple of big cupholders under a sliding lid all present in the E-Class interior. The glovebox is also generous, while there are smaller compartments for odds and sods in both the front and the back of the car. 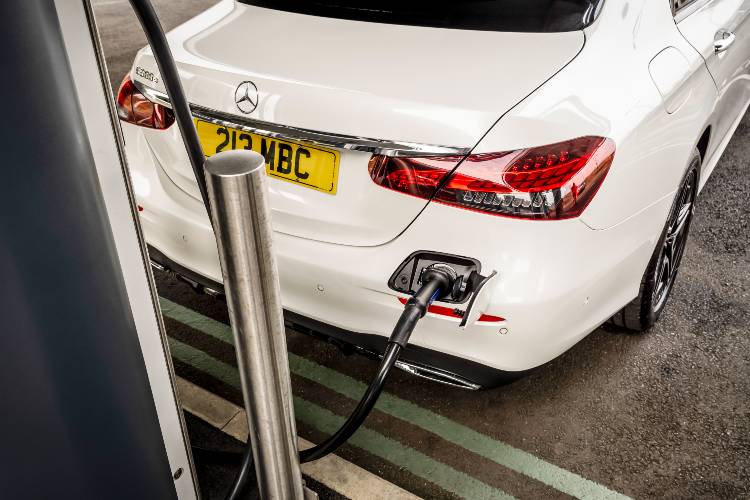 No Mercedes is what you would call inexpensive but competitive lease deals are available thanks to the E-Class’ strong residual values. Base spec for the E-Class is Sport, which comes with 17-inch alloy wheels, LED head- and taillights, cruise control with a variable speed limiter, the MBUX infotainment system on the Widescreen Cockpit twin 12.3-inch displays, heated front seats, a three-spoke leather multifunction steering wheel and more.

Stepping up to AMG Line and AMG Line Premium Plus packages really ups the luxury ante, with items such as a Burmester high-end sound system, a panoramic roof, 20-inch wheels and even augmented-reality satnav all on the cards.

Unless you go for one of the six-cylinder models or even the storming AMG high-performance versions, the E-Class should be pretty easy on the wallet to run. And (almost) none more so than this E 300 e PHEV, which claims up to 176.6mpg with just 38g/km of CO2, alongside the ability to travel up to 34 miles on electric power alone.

That’ll qualify you for all kinds of road tax and benefit-in-kind perks, but if you need even more frugality then the E 300 de diesel-electric PHEV can turn in up to 235.4mpg with a mere 33g/km of CO2. It does the same 34 miles on electric power alone, too. Oh, and battery charging times run to slightly less than two hours on a domestic 7.4kW wallbox for either plug-in hybrid E-Class. 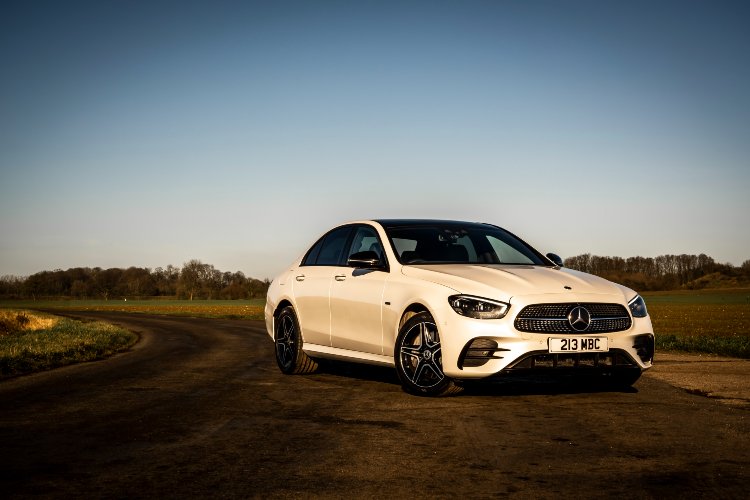 The E-Class is one of the safest cars on the market, putting in a strong showing at the Euro NCAP crash test it performed in 2016 (95% adult occupant safety and 90% child occupant safety both being particular high points). Improvements in advanced driver assist safety systems in the car during its midlife facelift ensure it continues to be a thoroughly secure way of getting around.

Find out more about NCAP and the safest cars to drive.

Still has the best chassis in this class, although its infotainment system isn’t as flashy as the Mercedes’ set-up.

Looks superb on the outside and in, but doesn’t have quite the spread of engines that’s available to the E-Class.

"It might not be the sharpest-driving nor most entertaining car in this part of the market, but the E-Class is a truly, well… classy operator all round. Especially in terms of ride comfort and refinement, where it is second-to-none amongst its peers."

Three Things To Remember About The Mercedes E-Class:

Car Body Types: The Ultimate Guide
Today we have a wide variety of car styles, but what do they all mean and which is best for you?Read More
Which Cars Are The Most Fun To Drive?
Our pick of the 10 most fun cars to drive in 2021...Read More
Electric Cars Explained
Everything you need to know about electric cars in one place.Read More
This website stores cookies on your computer. These cookies will allow us to remember you and your preferences.
We use this information to improve your browsing experience.
To find out more, please read our
cookie policy.