You're looking at probably one of the most recognisable and sector-defining cars of them all, the Volkswagen Golf. This German stalwart is now into its 8th generation, having appeared way back in 1974, and despite the presence of its all-electric alternative – namely, the VW ID.3 – the Golf is still a pivotal product in the company’s plans.

This Mk8, which launched in 2019, differs from its predecessor in one key way: it has much more advanced technology in the cabin, with the main human-machine interface (HMI) being a heavily digital set-up presented on two large and configurable TFT screens. But, in all other regards, it’s the Volkswagen Golf that we've come to know and love over the decades – same practical and spacious interior, same understated yet handsome looks, same air of diffident superiority and nigh-on impeccable build quality… well, mostly, on that last point. We’ll come back to that later.

So, with plenty of electric rivals out there to choose from and a plethora of crossover-SUVs vying for your money – not to mention quality rivals like the Ford Focus, Vauxhall Astra, Toyota Corolla, Peugeot 308 and more – is there still a compelling reason to opt for a VW Golf in the 2020s and beyond? 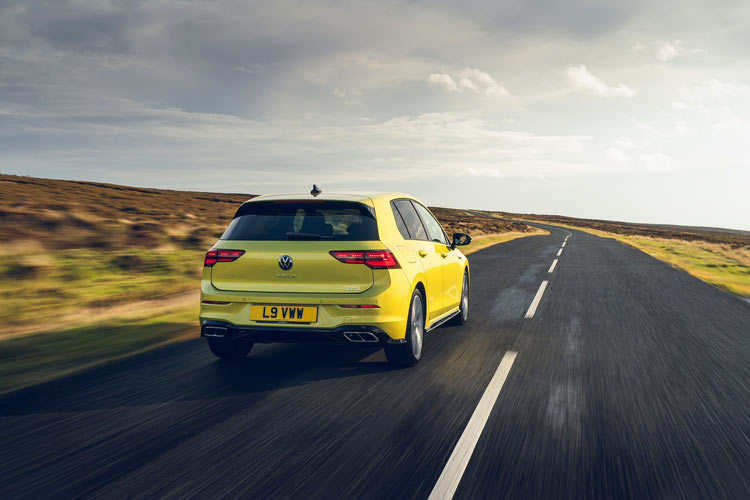 The infotainment. Now bear with us here – you’ve probably heard plenty of people claiming that the Mk8 Golf’s infotainment is its weakness, as it’s too complicated to use on the move. But we actually think that the interface is about the most smartphone-like layout we’ve seen from any major car manufacturer yet. It takes a bit of familiarisation to use it slickly, granted, and there’s still some odd placement of what few buttons there are (the heated rear window switch sequestered in the headlights panel, for instance), but the intuitive ‘square’ menu button on the right-hand side of the screen means navigating out of multiple sub-screens is a lot easier than you might imagine. The digital driving cluster is a particularly nice touch, too. Nice and clear. 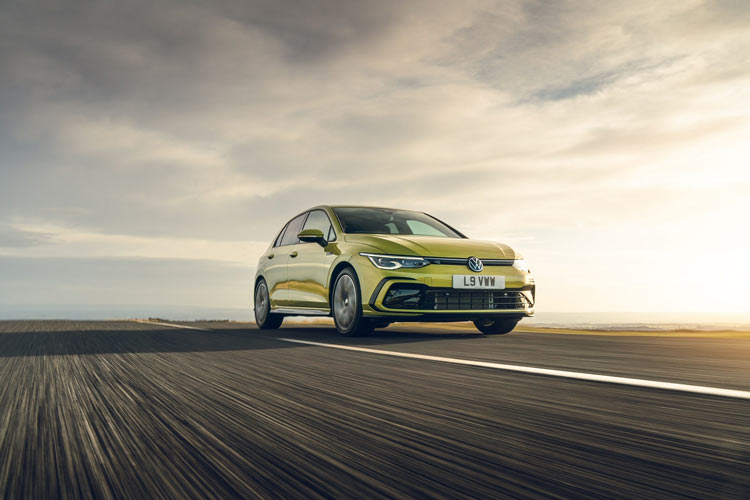 What was once the Golf’s unparalleled forte – that of top-notch interior finishing – is now no longer the case. There are a few areas of interior trim on the VW which feel a little cut-price, and what’s surprising is that the two cars which use the same equipment and are ostensibly sold for less - namely the SEAT Leon and Skoda Octavia - both have nicer cabins than the Volkswagen. So while its flashy digital screens certainly give the car’s occupants the ‘wow’ factor as soon as they get into the vehicle, things are brought back down to earth a little by the scratchy door-card panels and a general air of the Golf no longer being the class-leader in terms of haptics. 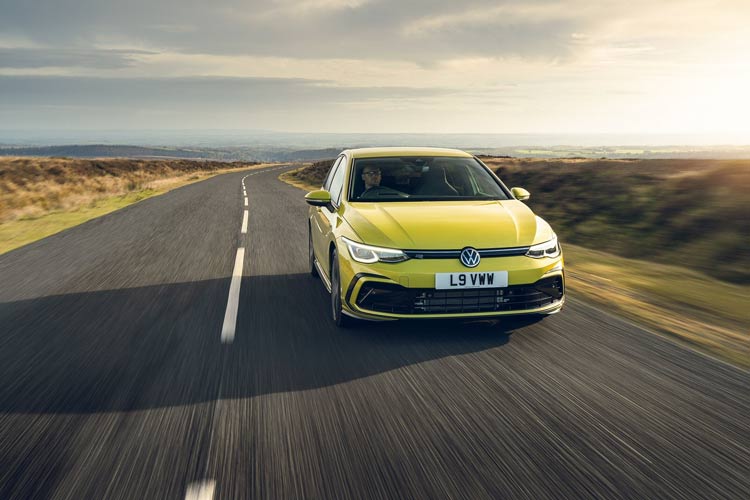 Polished. There is nothing the Golf Mk8 does which other competitor vehicles cannot do equally as well, or even better, yet there are few rivals in this class which are as talented in all departments as the VW is. So while a Ford Focus might be greater fun for handling in the corners, and a Toyota Corolla more efficient around town, and a Skoda Octavia bigger and more refined on the motorway, the Golf can stand comparison with all of them because it has no obvious weaknesses.

For instance, the handling is surprisingly adept and capable, without ever coming across as being enjoyable. The steering is pretty light at low speeds and it weights up a bit at higher pace, but you’ll never get much from it in the way of feel. That said, it is accurate and fast, so the front-end of the Golf presents the sensation of being responsive and eager.

It is also supremely assured on the motorways and faster A-roads, with incredibly comfortable ride quality and excellent suppression of external noise contributors. Models with the DSG automatic, including the eTSI mild hybrids, are blessed with a super-slick transmission and the easy way the Golf lopes along at higher speeds makes it feel like a much larger car than it actually is.

Finally, with a large glasshouse, low-mounted dashboard cowl and thin A-pillars, visibility out of the Golf in all directions is marvellous, so threading one about town feels like a natural and perfectly easy endeavour. You could almost call the Golf Mk8 a small car, so nimble and wieldy does it feel in urban areas. 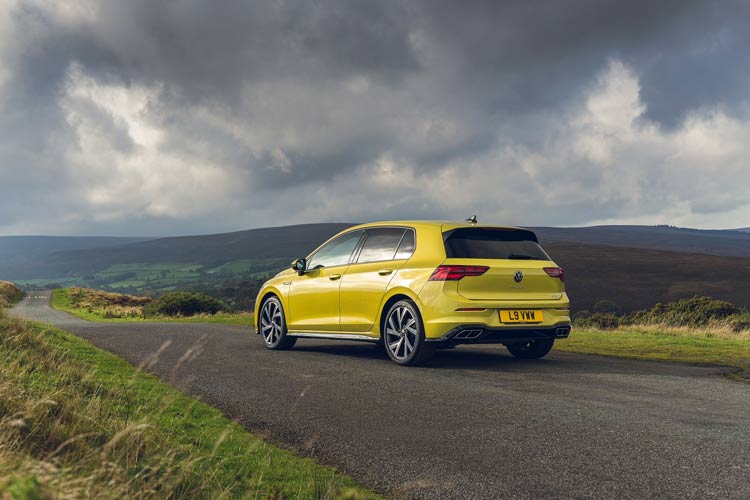 Like any Golf before it, the Mk8 is still reasonably accommodating in the back for adults, with good head- and kneeroom available, and it has a 381-litre boot, which is respectable in this class, if not any larger than the cargo bay on the old Mk7. The Skoda Octavia offers even more rear passenger space and a boot which is a veritable cavern by comparison, though.

Up front storage is what you'd expect too, although the Golf does boast especially wide door pockets, a reasonably large glove box and a decent amount of storage underneath the central armrest. 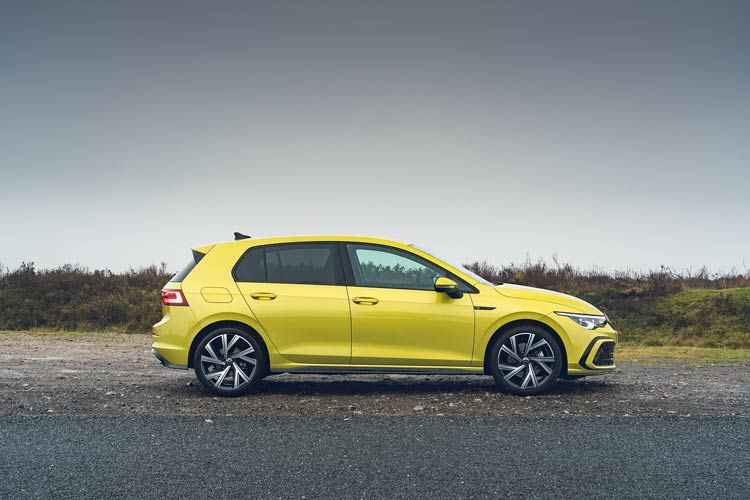 The Golf is very competitive on leasing deals thanks to its strong residual values and despite higher initial list prices, so while a SEAT Leon starts from around £237pcm with Vanarama and a Skoda Octavia kicks off at £258pcm, the Golf is in the middle at £245pcm.

An entry-level Life Golf Mk8 comes with 16-inch alloy wheels, Climatronic climate control, Adaptive Cruise Control, auto lights and wipers, LED illumination for the daytime running lamps and rear clusters, the Discover Media Nav infotainment system and a 10.25-inch Digital Cockpit Pro instrument cluster as standard among much more, including a healthy suite of advanced driver assist safety systems that saw the VW pick up maximum 5-star Euro NCAP safety rating. There are a ton of trim options to choose from, so many we've made a dedicated Golf trim guide..

Engines are turbocharged petrol and diesel units, with models badged TSI being pure petrols, eTSI cars being 48-volt mild hybrids, and eHybrid versions being plug-in hybrid electric vehicles. As usual, there’s a raft of high-performance Golfs available, including a GTI, a GTI Clubsport, a GTD, a GTE and the four-wheel-drive R flagship, but all engines offered in the VW are tried-and-tested powertrains that are smooth to drive and acceptably frugal for daily use. Expect upwards of 50mpg on average from pretty much all the non-performance petrol models, the 1.5-litre eTSI included.

More basic, lower-powered cars have a torsion beam rear suspension set-up, which is simpler and less expensive than the more advanced multilink, independent arrangement you’d find on the 150hp-and-above Golfs. However, you’ll probably never notice the difference between the two in operation, so you can safely pick sub-150hp drivetrains and still enjoy basically the same highly assured driving experience.

Sharp chassis and interesting looks, with a very user-friendly interior as well.

Much improved in this generation, with crisp styling and hybrid-power benefits.

Well, we had to, didn’t we? The all-electric alternative to a Golf. If you can live with its range limitations…

Check out our dedicated article for even more alternatives to the Golf.

"One of the most recognisable and sector-defining cars of them all, today's Golf is still the hatchback to go for if you want solidity, refinement and a sense of fuss-free high quality from your family runabout."

Three things to remember about the Volkswagen Golf:

More On The Golf