BMW, having a go at something wholly unfamiliar to it. This is the 128ti and it’s a hot hatchback designed to take on the likes of the Volkswagen Golf GTI, the Hyundai i30N, the Ford Focus ST and the Renault Megane RS 300, among more. But what’s unusual about it is that the 128ti is front-wheel drive (FWD) – BMW, as a company, is known for making predominantly rear-wheel-drive (RWD) cars and the previous 2 generations of the 1 Series were both RWD. However, this time around the 3rd-generation 1 Series shares underpinnings with the MINI, so all the power goes to the front wheels on the 128ti.

That keeps it neatly segregated from the range-topping M135i model which already exists, as the 306hp/450Nm M135i has BMW’s xDrive all-wheel drive. But there’s a suspicion the lighter, more affordable, FWD 128ti will actually be the more fun hot hatch to drive out of it and the M135i. So has the new performance 1 Series, reviving the historic ‘ti’ badge for BMW after a gap of nearly 20 years, upset the apple cart in its own model line-up? 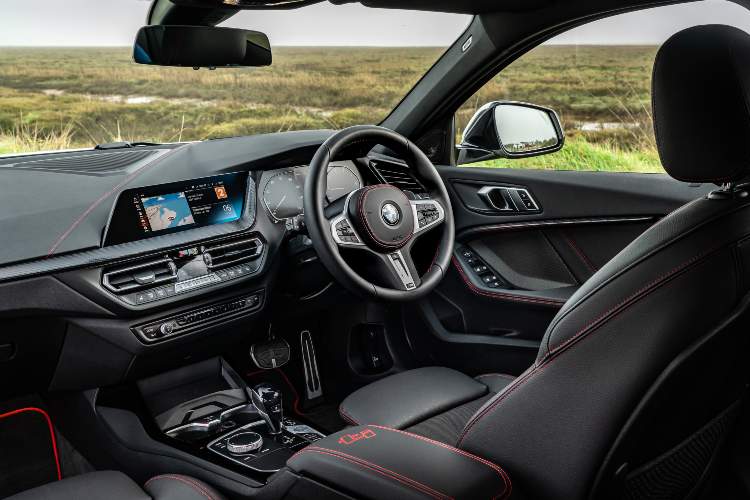 The interior is typically BMW excellent. Red stitching, including a ‘ti’ emblem on the centre armrest, helps to spruce up a cabin ambience that’s already fabulous across the 1 Series board. As standard, the 128ti comes with analogue instrument cluster dials and an 8.8-inch iDrive infotainment system, but an expensive option called BMW Live Cockpit Professional enlarges the central screen to 10.25 inches, while a matching 10.25-inch digital instrument cluster comes in too.

Thankfully, compared to the previous 2 generations of 1 Series, the switch to FWD architecture on the 128ti means there’s plenty of space in the rear of the passenger compartment – including in the middle seat, where the transmission tunnel is lower than previous models. With quality fixtures and fittings throughout, the 128ti not only has a cabin which looks good, and is also spacious and practical, but it feels great to the touch.

On the outside, the 128ti looks very similar to the sporty M135i model, although there are subtle differences. It has the same roof spoiler, meatier bumpers front and rear, 18-inch alloy wheels, and various vents and side skirts as the 4-wheel-drive 1 Series flagship, but the 128ti swaps out the M135i’s Cerium Grey exterior detailing for a combination of red highlights and black flourishes. So the window surrounds and huge, slatted kidney grilles are black, but the vents in the front and rear bumpers, the side-skirt stripes and small ‘ti’ graphics ahead of the back wheels, and the brake callipers are all red. These latter items are blue on an M135i, for reference – and, if you specify a red or blue 128ti, then all the red details bar the callipers are switched to black for better contrast. 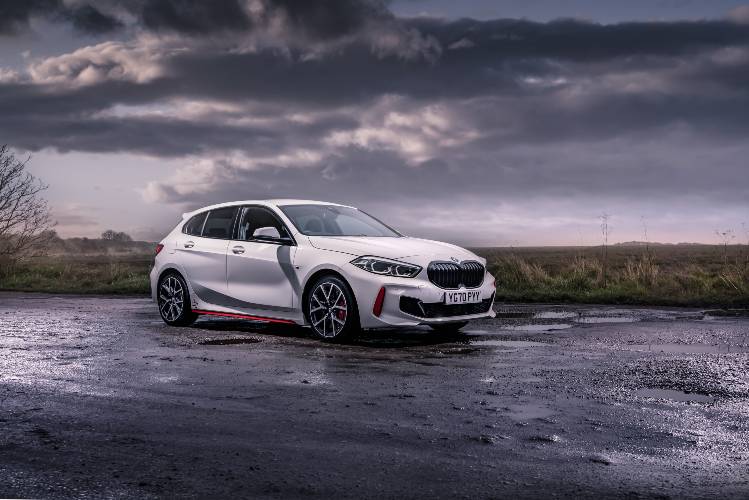 Overall, thanks to the fact its M Sport suspension allows it to sit 10mm closer to the road surface than a standard BMW 1 Series model, the 128ti looks great – apart from at the front, where the company’s latest styling trend of oversized kidney grilles is unfortunately emphasised by the black finish. Looks are obviously subjective, however, so perhaps our main complaint revolves around the (optional) digital instrument cluster on the BMW. With unusual hexagonal motifs and not the clearest layout, you get better TFT displays from rival manufacturers, especially those from within the Volkswagen Group like Cupra and Skoda. 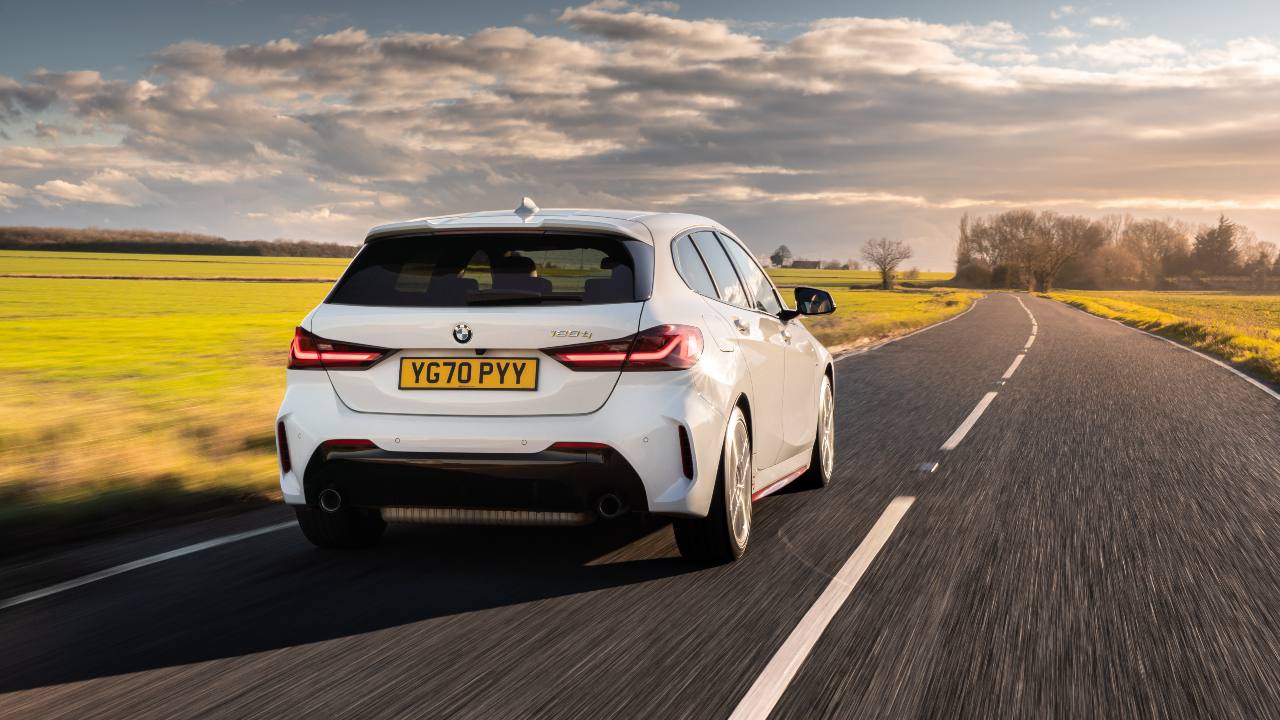 BMW has really delivered with its first FWD hot-hatch package. The same 2.0-litre turbocharged 4-cylinder petrol engine as used in the more potent M135i is used, only here it is detuned to 265hp and 400Nm, reductions of 41hp and 50Nm respectively from the top-dog 1 Series. Although the 128ti also loses the M135i’s rear driveshafts, it manages to retain the front limited-slip differential on its solitary driven axle to help it put down the power. It’s also, usefully, a sizeable 80kg lighter than the M135i, so although it doesn’t have the same xDrive traction as the 306hp model – meaning the 128ti’s 0-62mph time of 6.1 seconds is a little way off the M135i’s 4.8-second sprint – the front-wheel-drive BMW hot hatch nevertheless feels incredibly potent out on the roads.

Better yet, its 4-cylinder engine doesn’t have obviously artificially augmented noises, so the 128ti sounds organic and a natural performance hatchback, rather than synthetic. It’s a superb engine too, pulling keenly all around the rev counter and bereft of notable turbo lag – that sensation of the engine hesitating to respond to throttle inputs. With the 2.0-litre unit coupled up to an exceptional 8-speed Steptronic Sport automatic transmission with paddle shifts, there is little problem with the performance the BMW delivers. 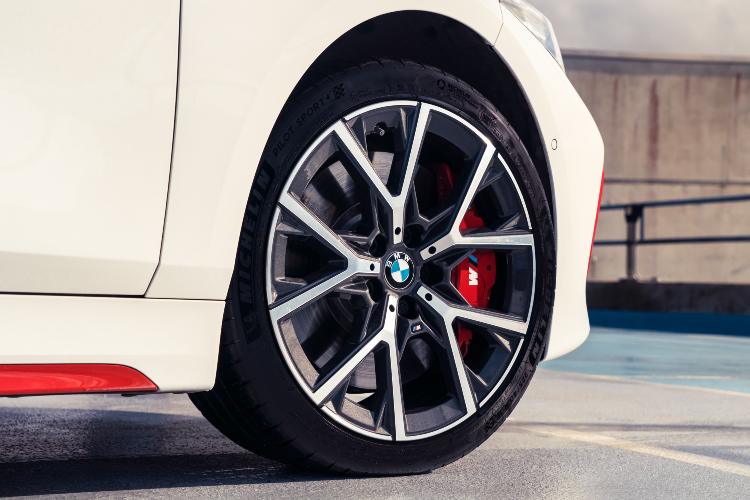 However, it’s the fact it corrals such power so effectively through only 1 driven axle which impresses the most. With the limited-slip differential doing its bit and the (no-cost) optional Michelin Pilot Sport 4 tyres fitted, the 128ti has grip aplenty. This means you can utilise the strength of the 4-cylinder turbo engine at will, without worrying about unruly behaviour from the BMW’s front wheels – even in slippery road conditions.

The steering on the 128ti is also lovely, as it has been calibrated especially for the FWD model with good weighting and accuracy, while the 10mm-lower M Sport suspension and the same strong brakes as used on the M135i both serve to ensure that the ti corners and stops as well as it goes in a straight line. Indeed, much of the rear-axle suspension set-up and the underbody bracing has been specifically adapted for the 128ti, to make it feel like a rear-driven sports car to drive, instead of one led from the nose. BMW has executed this programme of alterations quite brilliantly.

Any self-respecting hot hatchback, especially a premium model from a manufacturer like BMW, must also be useable on a day-to-day basis without feeling significantly compromised and the 128ti scores well here, too.

Admittedly, the M Sport suspension can be a little tough and bouncy at times, notably at a 70mph motorway cruise when German cars’ damping normally comes into its own at such speeds. But the general noise suppression in the passenger compartment and the BMW’s overall ride quality are both more than good enough to see it past muster as a comfortably daily cruiser.

The torquey engine and slick gearbox are also just as happy pootling around at lower revs as they are working hard higher up the dial, so you’ll enjoy the 128ti in towns and on motorways almost as much as you will when you’re on the right roads, exploiting its excellent chassis. 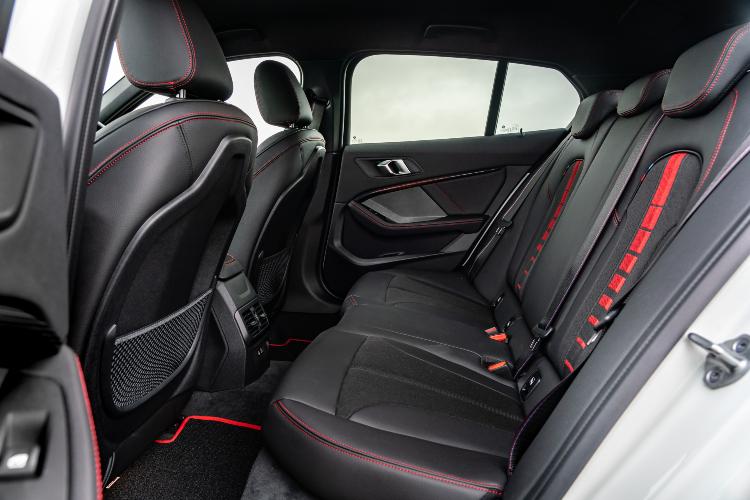 We’ve already touched upon the fact that rear-seat passengers will be far more comfortable in this generation of BMW 1 Series than the preceding RWD versions, but there’s also a 380-litre boot at the back of the 128ti which is a good size for a car of this class. The rear seats split-fold 60/40 as standard, although an inexpensive option changes that to a more practical 40/20/40 configuration. Either way, fold the second-row seatbacks down and you have 1200 litres of boot space to play with. There’s also a 2-stage floor in the cargo area, useful for storing a few things in a hidden compartment or just enlarging the loading bay as much as possible for bulkier items.

Storage throughout the passenger compartment is admirable, with 4 large door bins each capable of holding a large bottle in a moulded circular holder. There are 2 traditional fixed cupholders ahead of the gearlever of the 128ti and another 2 underneath a pop-up flap in the fold-down centre-rear armrest. Beneath the central armrest between the front-seat passengers is another storage bin, the glovebox is a good size and pretty deep too, while to the right of the steering wheel is a small, covered cubby for coins and smaller pieces.

The wireless smartphone charging pad is neatly positioned at an angle ahead of the front cupholders, with a clasp at the bottom ensuring your device won’t move around while you’re driving. Dotted throughout the cabin are 4 USB sockets – 3 USB-Cs, with 2 in the rear and 1 in the front-centre armrest compartment, while a solitary USB-A is located near the front cupholders and wireless smartphone charging pad. 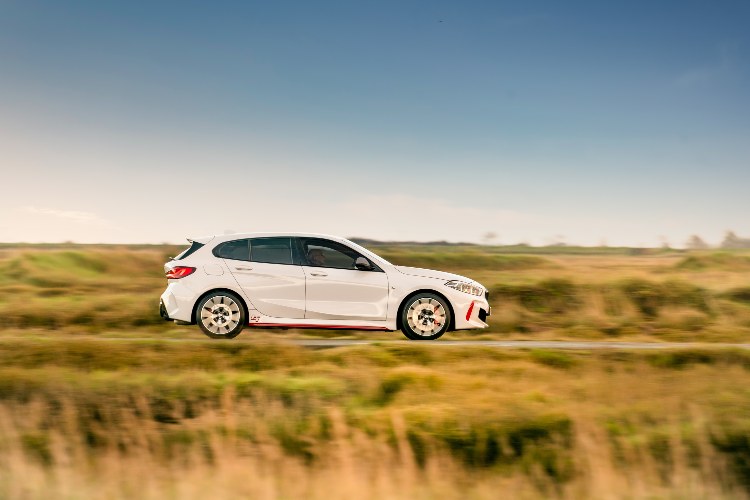 The BMW 128ti is next-to-top-spec in the 1 Series range, only being surpassed by the M135i itself. That means the ti is not cheap, but it is well equipped to account for its higher fees. As standard, owners enjoy a multifunction steering wheel, electrically adjusted and folding exterior mirrors, heated front Sports seats, M tricolour-striped seatbelts, automatic climate control, cruise control with brake function, 18-inch alloy wheels, M Sport suspension, an M aerodynamic body kit and High-Gloss Shadowline exterior detailing, Anthracite interior headlining, and 8.8-inch BMW iDrive infotainment, among more.

BMW quotes 168g/km of CO2 emissions and a WLTP fuel economy of 40.9mpg, neither of which are going to make the 128ti the cheapest car to run nor the most impressive in terms of benefit-in-kind (BIK) taxation. However, for a 265hp car capable of a limited 155mph top speed, it’s a surprisingly frugal machine and during our test of the vehicle, we managed to achieve 38mpg across 650 miles of driving – with a best of 42.8mpg returned on a long motorway run. So the 128ti shouldn’t break the bank in terms of fuel costs, and it also comes with BMW’s 3-year, unlimited-mileage warranty for full peace of mind. 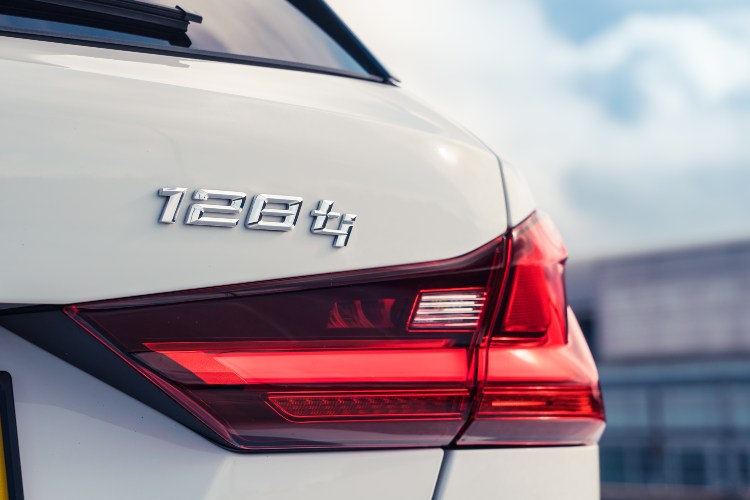 Bear in mind that much of the stuff which is optional on the BMW 128ti – like the larger 10.25-inch infotainment system and corresponding-size digital instrument cluster, plus radar cruise control – are standard on the more powerful M135i. So it might be worth considering whether specification thoroughness or outright driving rewards are you priority, as there will likely be very little in it between monthly leasing costs on comparably equipped 128ti and M135i models.

What Alternatives Should I Look For?

An astonishing first effort for a hot hatch, updated in 2020 with sharper looks and DCT automatic gearbox option.

Always a classy all-round performer but the BMW 128ti is the superior car in most regards.

Top Cars For Safety
Find out our top picks of the safest cars...Read More
Best Small Crossover SUVS
Looking for a small SUV? Here's our top picks...Read More
Car Body Types: The Ultimate Guide
Today we have a wide variety of car styles, but what do they all mean and which is best for you?Read More
We use cookies to improve your experience. Find out more in our cookie policy.