Hot hatchbacks really can do it all – in truth, these are probably all the performance car you’d ever need. Why’s that, you ask? Well, the answer is simple: these are fast vehicles which are made by a manufacturer taking an ordinary supermini or family hatchback, and then fitting the most powerful engine and toughest suspension to them that said carmaker can reasonably get away with.

The resulting machine is usually exceptional, as what you have is an affordable, reasonable-to-run, practical car that just so happens to look great – outside and in – and which can also be thoroughly enjoyed on the public roads without putting your licence in danger. Throw in a sparkling chassis and strong engines, and what you have with a hot hatchback is a truly winning combination. Unbeatable, in fact. 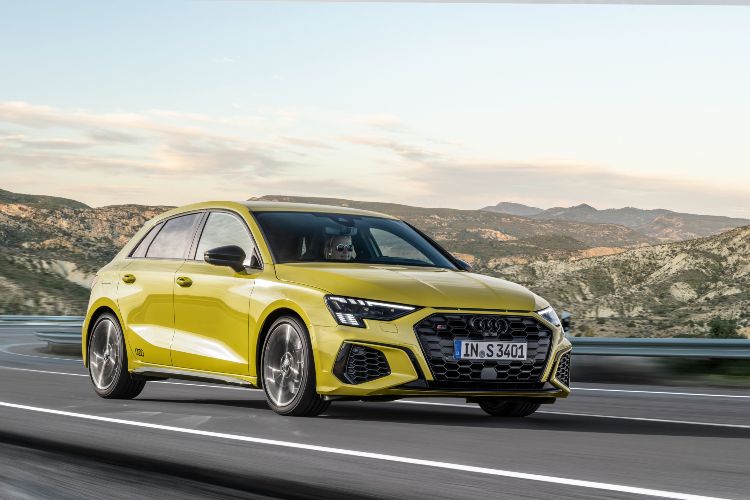 There has been an ultra-rapid RS3 version of 3 out of the 4 generations of Audi A3 so far – the Mk1 topped out with a 210hp S3 only, but in 2011 the first RS3 appeared and it was a bit of a monster. Since it arrived, all RS3s have had 2.5-litre, 5-cylinder turbocharged engines, quattro all-wheel drive (AWD) and simply outrageous all-weather performance. However, the third RS3, based on the Mk4 A3 which launched in 2020, takes bonkers speed to the max. Its 400hp/500Nm engine blasts the AWD RS3 from 0-62mph in just 3.8 seconds – making the Audi the fastest-accelerating car on this list – while its limited top speed can be as much as 180mph if you spec it right. It ain’t the cheapest to buy or run, but the sonorous Audi RS3 is bound to put a huge smile on your face if you choose to go with it – oh, and it’s also available as a 4-door Saloon, if you don’t want the 5-door Sportback hot hatch for some reason. 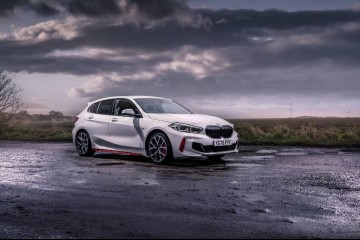 BMW’s first-ever foray into the world of front-wheel-drive hot hatches is a belting one. Using a MINI-related chassis, the 128ti uses a 2.0-litre turbocharged 4-cylinder engine to deliver strong performance for its comparatively modest 265hp. However, it’s the handling which impresses the most – BMW’s engineers deliberately set the 128ti’s rear suspension up to give the impression that it’s actually rear-wheel drive, rather like the company’s most fabled machines. The end result is a hot hatch that’s more fun to steer than the faster, more expensive and 4-wheel-drive M135i flagship which sits above the 128ti at the top of the range. 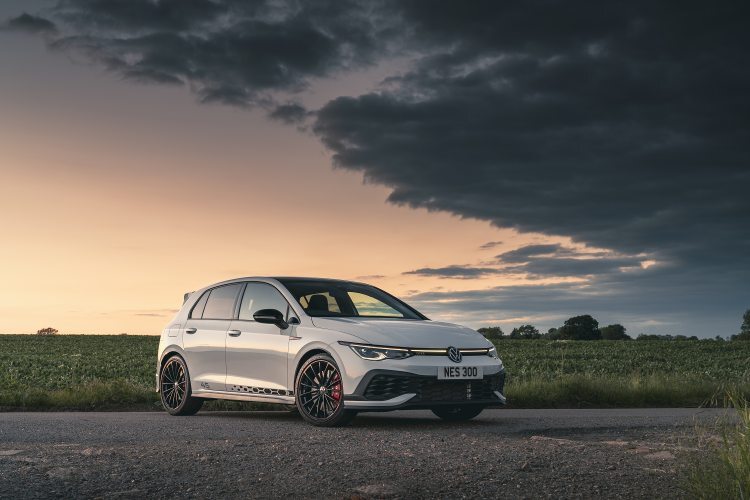 We’re cheating here. Sorry. But these rapid Mk8 Volkswagen Golfs are so very similar in outlook that we can’t choose between them. Both are powered by a 2.0-litre 4-cylinder turbocharged engine and both are limited to 155mph, although an option pack on the R can increase that to 168mph. Where they subtly differ is in power levels and delivery: the R has an extra 20hp and 20Nm on the GTI Clubsport, for peaks of 320hp and 420Nm, and it also has 4WD. That means it’s much quicker for 0-62mph, but does the front-wheel-drive Clubsport provide more giggles for its driver? Arguably. Oh, and it’s slightly cheaper to lease, as well. Too tough to split them, we’ve put both forward for your consideration here. 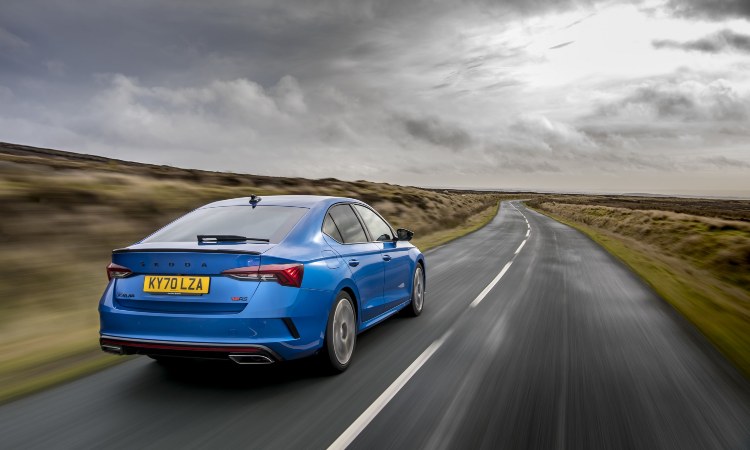 By no means the most out-and-out exciting car here, the Skoda Octavia vRS is nevertheless a superb all-rounder and definitely the one to pick if you need a family-friendly machine first and foremost. It sits on the same platform and uses the same mechanicals as a regular Volkswagen Golf GTI, but its elegant fastback body makes it far more spacious inside and it has a simply vast boot. The cabin is also beautifully appointed and there are plug-in hybrid, diesel and Estate options if you need them. However, the 245hp TSI petrol is the one to go for. 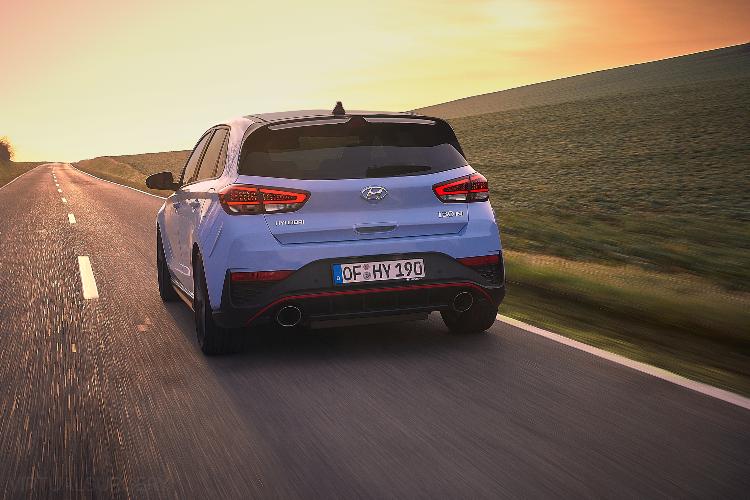 For a company’s first-time effort at a hot hatchback, the Hyundai i30N is quite exceptional. There’s a good argument to be made to say it’s the ‘perfect’ hot hatchback, blending just the right amount of affordability and usable on-road performance with genuinely thrilling dynamics and a storming engine – complete with a raucous soundtrack from the exhausts. A couple of truly outstanding rivals top it on this list, though, but do not let that put you off the hot Hyundai because it’s a sensational car – and there are not 1 but 2 hatchback bodies for you to choose from, the regular model and the swoopy Fastback. A technical update in the early 2020s saw peak power and torque increase marginally, to 280hp and 392Nm, while a new dual-clutch gearbox (DCT) option trims the i30N’s 0-62mph time to a deeply impressive 5.4 seconds if you equip it.

Looking for something a little less powerful? Take a look at our run down of the best hatchbacks this year. 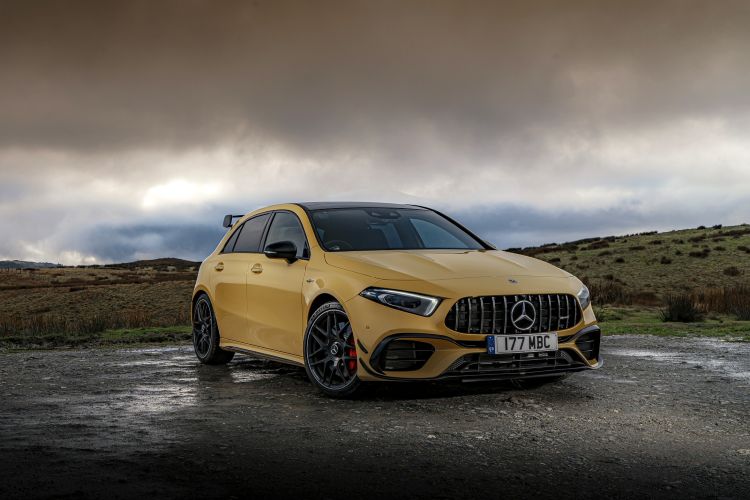 You won’t get any more power from a hot hatchback than this. The Mercedes-AMG A45S 4Matic+ has a 2.0-litre turbocharged petrol engine like so many other cars on this list, but its hand-built motor is one of the most powerful 4-cylinder units in the entire world. To corral such massive outputs of 421hp and 500Nm, the AMG runs 4WD and an 8-speed twin-clutch gearbox, which allow it to go from a standstill to 62mph in just 3.9 seconds. Of course, such supercar-like performance isn’t cheap to lease but the mad Mercedes is most definitely worth the considerable outlay. 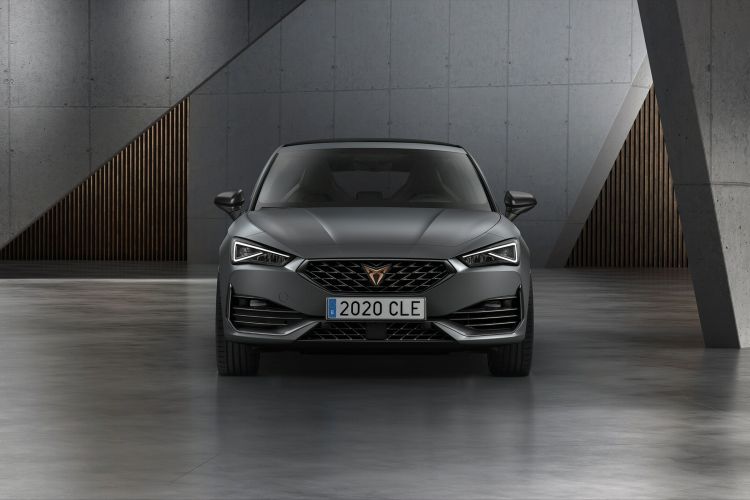 This is the same car underneath as the Volkswagen Golf GTI Clubsport at No.8 on our list but, somehow, SEAT’s new performance spin-off brand Cupra does everything a little bit better than Volkswagen does. Looks are subjective but it’s hard to argue that the more-demure Leon will have greater widespread appeal than the lurid, big-spoilered Volkswagen, while the Cupra’s interior looks smarter, feels better-built and has a superior infotainment system. The 300hp Leon is also more fun to drive than its Golf relation, so all in all this is one of the greatest hot hatchbacks of the present day. 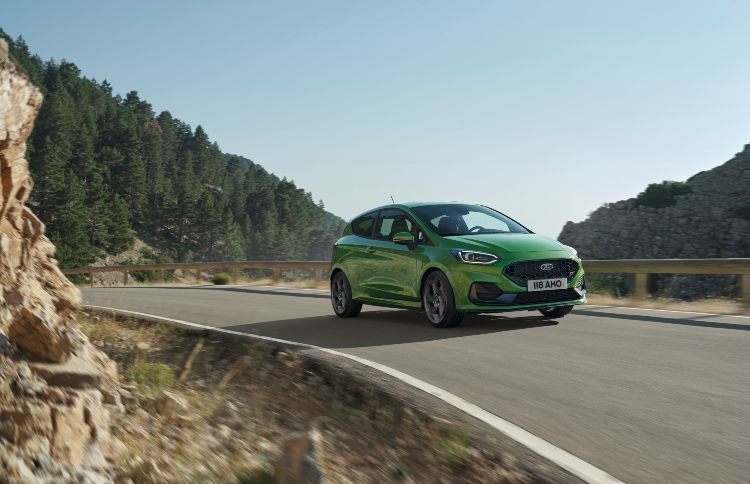 You might look at the stats here and think we’ve gone mad putting something relatively slow and underpowered this high up. However, the Fiesta ST is a smaller car than (almost) everything on this list and it’s such a cracking supermini hot hatch that practically all its competitors have given up the ghost and gone home. Aside from the ho-hum Volkswagen Polo GTI and a new challenger in the form of the Hyundai i20N, the Fiesta ST doesn’t have any direct competition. But that doesn’t make it any the less astounding: its 1.5-litre, 3-cylinder engine delivers 200hp into a chassis that’s one of the best in the business, regardless of the class of car you’re talking about. You won’t find many hot hatchbacks that are more fun than this Fiesta – and the final cherry on the cake is it’s very cheap to lease, too. 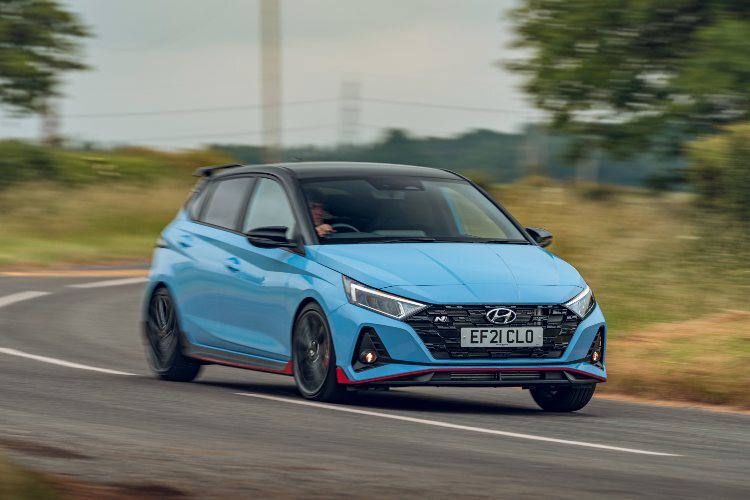 It’s a mark of just how gobsmackingly brilliant the Hyundai i20N is that it pushes its mighty and direct rival, the Ford Fiesta ST, down to third place overall. Proving that bigger isn’t necessarily better these days – all 3 of our top hot hatches are based on smaller supermini cars – the i20N is a showcase of how remarkable Hyundai’s go-faster arm really is. The i20N’s 1.6-litre, 4-cylinder turbocharged engine doesn’t just perform strongly, it sounds brilliant as well, and yet the majesty is that this powertrain is allied to a compact, front-wheel-drive chassis of near-genius. Yep, the i20N really IS this good. Only something incredibly special could hope to topple it, so without further ado… 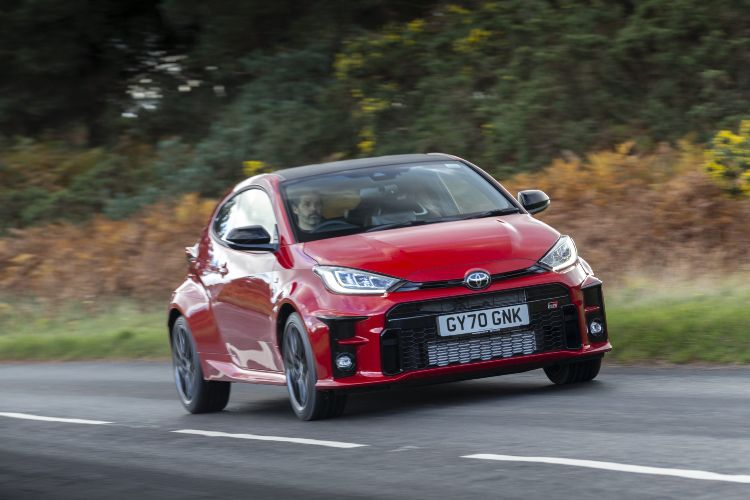 Strictly speaking, this isn’t quite a hot hatch. The Toyota GR Yaris is a weird, bespoke type of car called a homologation special and while it might say ‘Yaris’ on the back and it has Yaris-shaped lamps clusters, almost every panel on it is different to the base supermini and it also has a completely unique chassis. It’s therefore a very special model with 1 minor point to note – it’s sold as a less practical 3-door hatchback only – but you will not get many finer driving experiences from anything else than you would from the 4-wheel-drive GR Yaris. Not even on sports vehicles and supercars which are many times more expensive per month to lease than the Toyota. And as it has a hatchback-shaped body, even though it’s an impractical and small one, then utterly outstanding GR Yaris takes the coveted top spot on our list.

Take a look at the latest hot offers in our full range of hatchback leasing deals.

Ford Fiesta Review
The Fiesta has always been the small hatch benchmarks - does it still lead the pack?Read More
Which Cars Are The Most Fun To Drive?
Our pick of the 10 most fun cars to drive in 2021...Read More
Top 10 Best Company Cars
Our picks of the best company cars for you, for the 2021/22 tax year and beyondRead More