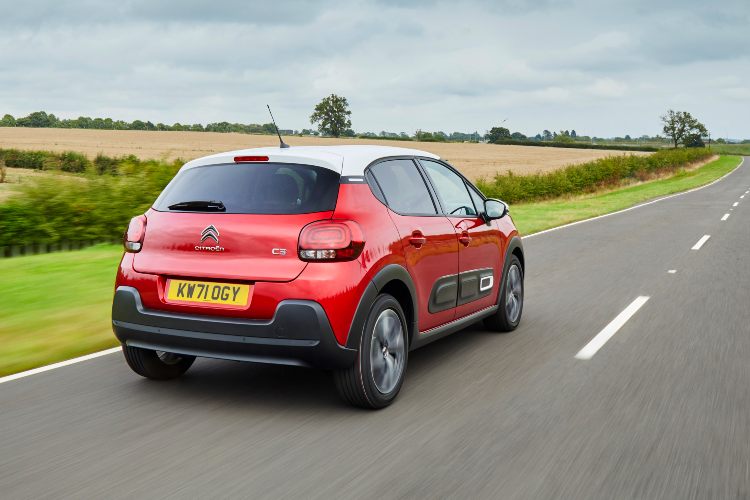 Now that the C1 city runabout has bit the dust, the C3 supermini is Citroen’s smallest car sold in the UK (except for the Ami electric vehicle which is in a class of its own).

It’s quite a long-serving nameplate for the French firm, this model being the 3rd generation of the C3 since its appearance in 2002. It has, in the meantime, gestated a crossover spin-off – as is the way with all small cars these days – called the C3 Aircross, but what we’re looking at here is the company’s straightforward compact hatch. Or, put another way, a car to challenge in the B-sector alongside such titans as the Ford Fiesta, the Renault Clio, the Peugeot 208, the Volkswagen Polo, the Toyota Yaris, the Skoda Fabia and… well, you get the drift. There’s a lot of choice in this particular marketplace, so why should you seek out the Citroen as your choice of urban runaround? 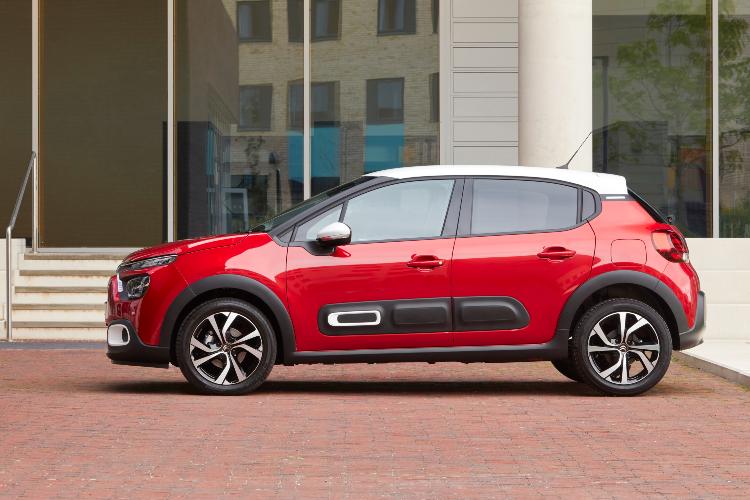 Like so many Citroens of the past, the C3 Mk3 stands out thanks to quirky styling on the outside – complete with lots of strident design details, contrasting trim finishes and even the option of having the roof painted in 4 different colours to the bodywork – and an interior based around reductive minimalism and ergonomic comfort of the highest order. We wouldn’t say the Citroen is the out-and-out best-looking machine in this class, you understand, but it’s certainly highly distinctive, which means it will have immense appeal to those who like to be daringly different. 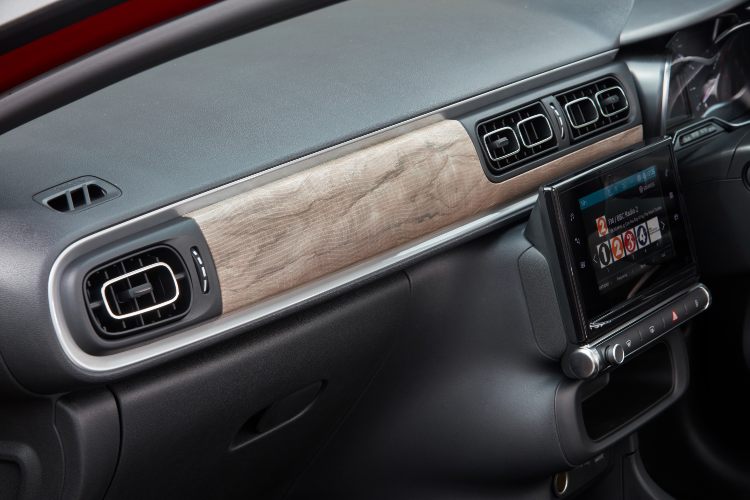 Well, we wouldn’t say the interior finishing is of unremittingly high quality, as there are 1 or 2 areas and surfaces which feel… less expensive to the touch, shall we say, than those you’d find in a Volkswagen Polo. Furthermore, there’s not a great deal of engine choice in the range, as you have 2 different specifications of the PureTech 1.2-litre 3-cylinder petrol motor (1 without a turbo and 1 with) and then a solitary turbodiesel, making for a line of just 4 different drivetrains. And that’s only if you count the manual and auto versions of the turbo petrol model as separate entities. 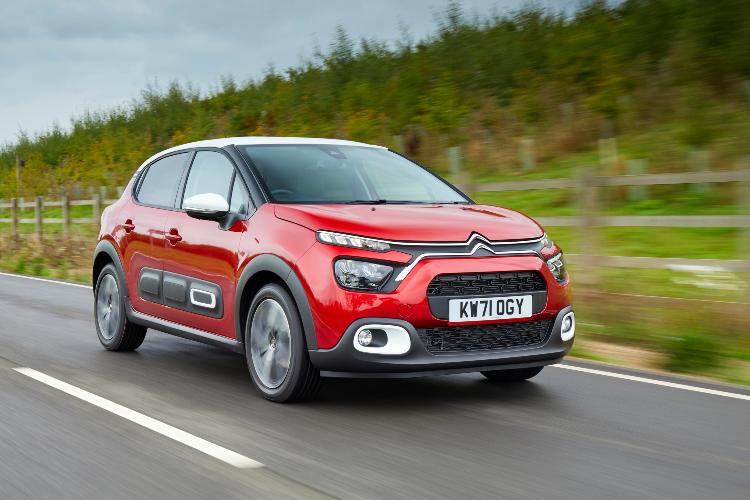 Citroen has had a recent push to make its products as comfortable as possible, which is an area that the company has historically been renowned for back in the 20th century. Larger models, like the C4 hatchback and the C5 Aircross, have pulled this luxury ethos off with aplomb, thanks to cushion-like suspension and no pretence at sportiness whatsoever. Even the C3 Aircross manages to feel plush and accommodating in terms of ride comfort.

The C3? Not… so much. It’s very good in this regard and will certainly feel softer to ride in than some of the more dynamically minded competitors in this class, like the Ford Fiesta, SEAT Ibiza and Peugeot 208. But it’s not as pillowy-smooth and relaxing as it could be, while rolling refinement isn’t a match for some of the leading lights (read: ‘newer’) cars in this category, such as the Toyota Yaris. The long and short of this is that, when you’re travelling along a motorway, the Citroen will be louder and more fidgety than some of its rivals, while around town it’ll be largely excellent but not flawless in the way it smothers out lumps and bumps.

The flipside of this is that Citroen hasn’t geared it to be thrilling to drive in the slightest. With light steering and good yet not remarkable body control, it’s not as if the C3 comes alive in the corners. It is, of course, a long, long way from being bad in this regard and in truth is more capable than you might expect given the company’s comfort-oriented ethos. But there’s a reason the C3 doesn’t have any sort of a performance model in its ranks – this chassis is simply not suited to having any more power thrown at it than it already does.

Speaking of which, the engine choices boil down to a 1.2 PureTech non-turbo petrol with 83hp and 118Nm, all allied to a 5-speed manual transmission, a 1.5-litre BlueHDi 4-cylinder turbodiesel delivering 102hp and 250Nm through the same gearbox, or – by far and away the best choice in the line-up – a turbocharged derivative of the PureTech petrol which churns out 110hp and 205Nm. This comes with a choice of manual or automatic transmissions, either with 6 gears, but the manual is the one we’d go for. The shift action is sweet and precise, while it is the only C3 which can crack the 10-second barrier for the 0-62mph sprint; this reflects in the best driving experience in the French supermini, as the 1.2 PureTech turbo is an engaging motor with decent performance, an appealing soundtrack and good midrange flexibility. 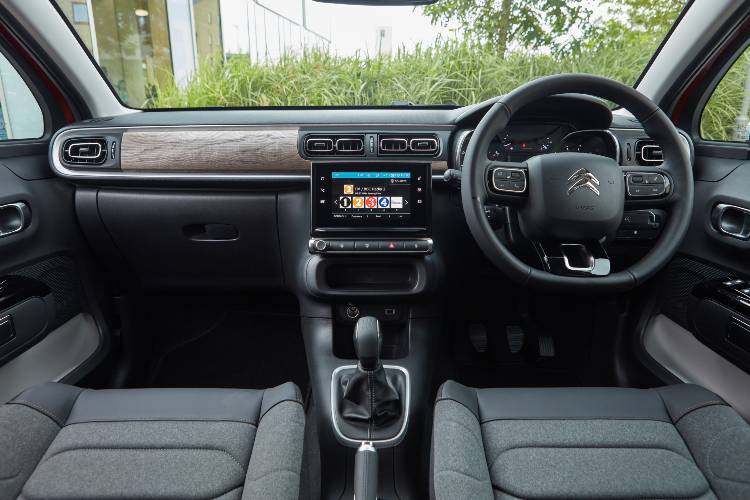 While rear passenger room is merely adequate in the Citroen C3, it has one of the biggest boots in this class – measuring 300 litres with all the seats in use. However, with the second row of chairs folded away, a 992-litre capacity is more middling among its rivals. One thing to bear in mind, though, is that the C3’s seats have been ergonomically designed to be as comfortable as possible – and they are. None of its rivals have as squidgy, soft seats as this French car, although be warned they don’t offer a lot of support if you’re cornering fast. Which you probably won’t be, given the Citroen’s supple chassis.

In terms of interior storage, it’s all perfectly acceptable by class standards. There are 2 cupholders ahead of the gearlever, a storage slot below the infotainment system, a small cubby to the right of the steering wheel and then big door pockets, which are finished in a lighter-coloured plastic than the rest of the door card so that you can easily spot items down in the bottom of these recesses. The only black mark, as it ever is on right-hand-drive French cars, is that the C3’s glovebox is pathetic – half of its space is taken up by the fusebox, so you won’t get much more than, well, a pair of gloves in there. Tsk. 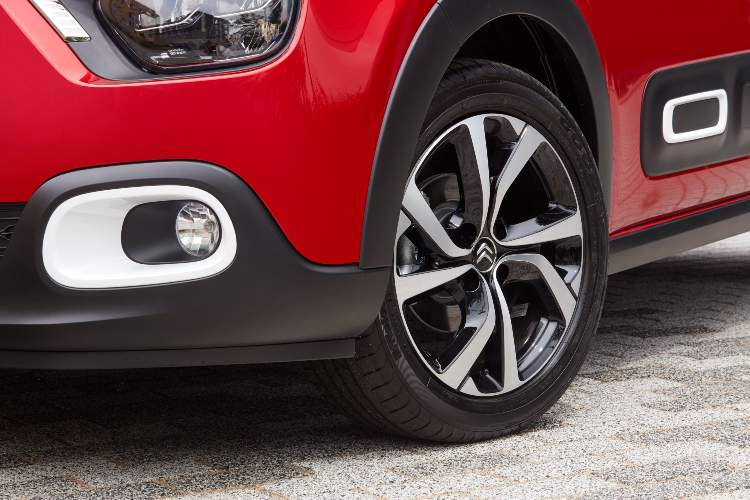 Citroen offers the C3 in 5 main specifications, which – from time to time – it enhances by throwing in a special model; an example would be 2022’s Elle, which was a tie-in with the famous lifestyle magazine of the same name.

Further, bear in mind the basic You! C3, which is at least incredibly cheap (its list price is more than £3300 less than any other model, meaning it will be very affordable to lease), doesn’t have the 7-inch touchscreen with Apple CarPlay and Android Auto, which all the other specs do – but it’s only the very top Shine Plus which has satnav incorporated as standard, which is a £400 option on Sense, C-Series and St James/Elle variants.

No Citroen C3 is going to break the bank to run, as all versions will do comfortably in excess of 45mpg combined, with the turbodiesel model capable of up to 70mpg officially. CO2 emissions also peak at 141g/km in a high-spec PureTech 110 automatic, with the BlueHDi recording the lowest figure at 113g/km. Again, though, we’d be steering you to the turbocharged PureTech 110 manual petrol – it’s actually marginally cleaner and more efficient than the basic non-turbo PureTech 83 petrol, the 110 recording 49.1-54.5mpg combined and outputting between 123- and 130g/km of CO2. So not only is this drivetrain the best to drive, it ought to be very frugal to run, too. 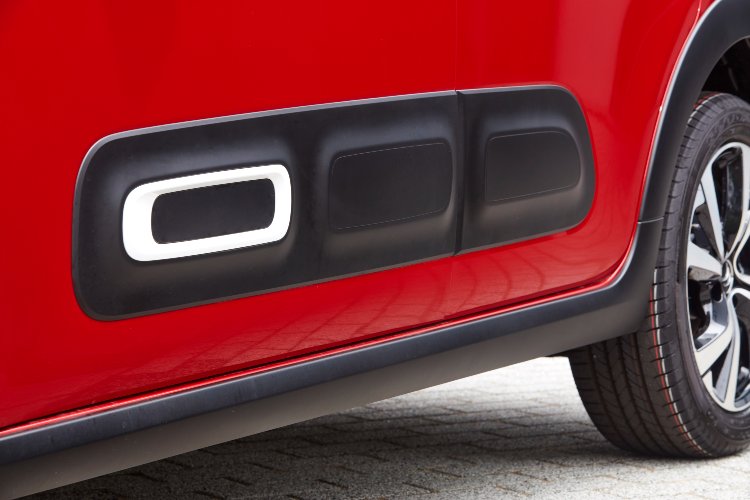 Those lumps on the side of the doors are the C3’s famous ‘Airbumps’. They’re designed to protect the bodywork from car-park dings, such as when people open their vehicle’s doors onto yours while you’re parked perpendicularly, and they also give the Citroen hatchback its striking appearance. They used to be found on the Citroen C4 Cactus model, as well as various other cars in the manufacturer’s catalogue, but they’re becoming less and less commonplace these days. They’re part of what makes the C3 look so striking overall.

Not thrilling but supremely practical inside and is offered with advanced hybrid powertrains.

Great to drive and look at, while the interior is easier to use than the Citroen’s cabin as well.

Perfectly pleasant but not very memorable, the Corsa nevertheless sells in its droves.

"Like so many Citroens of the past, the C3 Mk3 stands out thanks to quirky styling on the outside – complete with lots of strident design details, contrasting trim finishes and even the option of having the roof painted in 4 different colours to the bodywork."

3 Things To Remember About The Citroen C3:

How To Choose The Right City Car For You
Find the ideal city car for you as we take a look at what makes the ideal urban runaround...Read Guide
The Top 10 City Cars
Here’s our pick of the 10 best cars for carving up the city streets...Read Guide
How Does Car Leasing Work?
Learn more about the simple steps to leasing your dream car with fixed monthly rentals.Read Guide